4Sevens has recently released a new series of Neutral and Warm white emitters for a number of their current product lines. They have sent me Neutral White versions of the Preon 2 and Quark 123-2-X, two lights that I have reviewed previously in Cool White form (see my original Cool White Q123-2X review and Cool White Preon 2 review for more info). 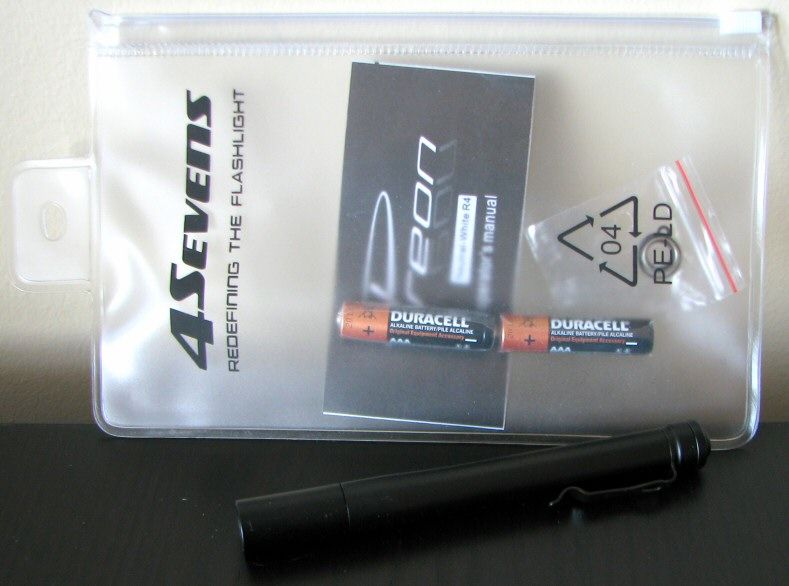 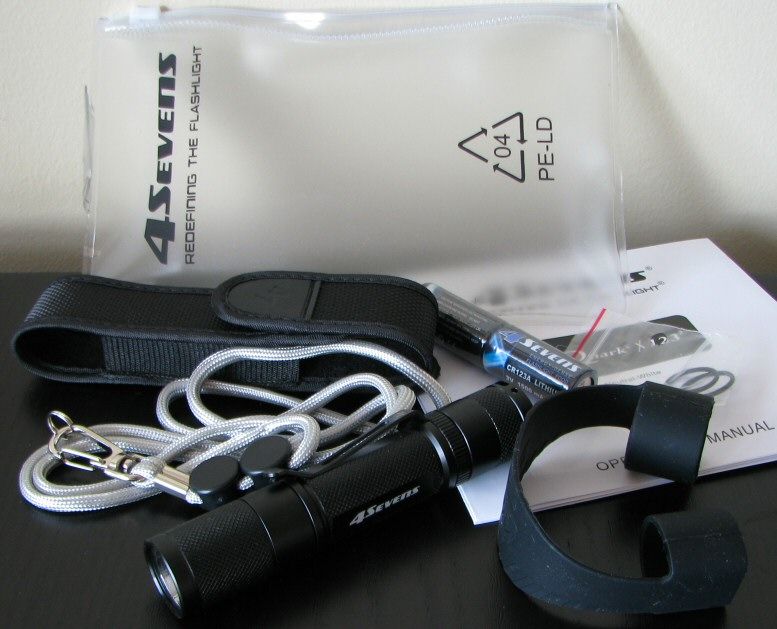 I will endeavor here to give you a quick overview and comparison of how the new Neutral Whites compare to the earlier Cool White versions. Note that I did a detailed comparison of the Cool, Neutral and Warm white options for the 4Sevens Mini series about a year and half ago. That review has a greater discussion of the issues with photographic representation of tints, which I will just touch on briefly here.

To help you understand the difference between the tint categories, CPF user DFiorentino has complied an excellent set of emitter tint bin graphs. You can also find his main ANSI white Cree tint bin graph in the CPF-Wiki entry on ANSI white tint bins.

To put things in an ANSI tint bin context, "Cool White" tints are typically in the first three quadrangles of ~4700-7000K temperature range, "Neutral White" are typically the next two quadrangles of ~3700-4700K, and "Warm Whites" are the last three quadrangles of ~2500-3700K. That is just my approximate ranking of Cool/Neutral/White labels - where possible, it is always better to have the actual specific tint bin information (i.e. some manufacturers may call one bin Neutral, while another calls it Warm). I don't know what 4Sevens is currently shipping, so please check with them directly for confirmation of specific tint bin-ranges.

FYI, as an aside, the output bins for warmer tints are usually lower than those available for cooler tints, at any given point in time. The reason for this is that more phosphor is typically used to get the warmer tints. Thus, warmer tints effectively mean lower output, for the same manufacturing method. That said, the output bin difference usually isn't too great between the so-called "Neutral" and "Cool" white tints. 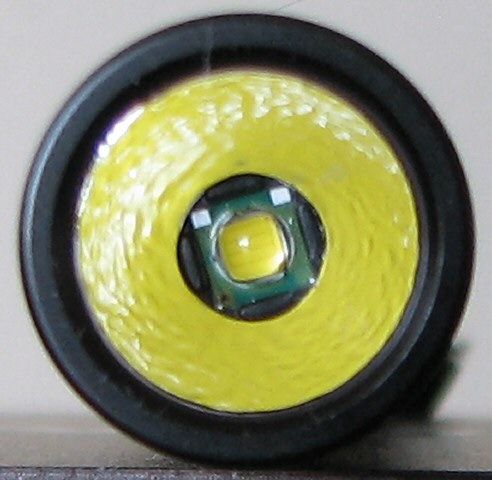 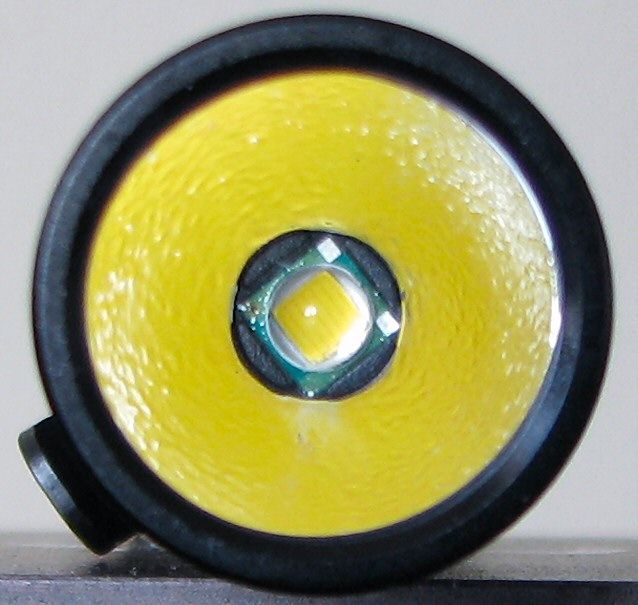 As I discussed in an earlier 4Sevens Mini tint comparison thread, photographing tint bins is a real challenge. Commonly, most people use their camera's "sunlight" white balance for beamshots (which is ~5200K in the case of my Canon). As you can tell from the approximate temperature ranges given above, this is not bad for Cool White/Neutral White comparisons. But be aware that it does tend to disadvantage Warm White (and incandescents, for that matter) - they tend to look quite orange at ~5200K white balance. :shrug:

With that in mind, here are some white wall beamshots, about 1m from the wall. All lights on 2x battery sources, on their highest output setting. 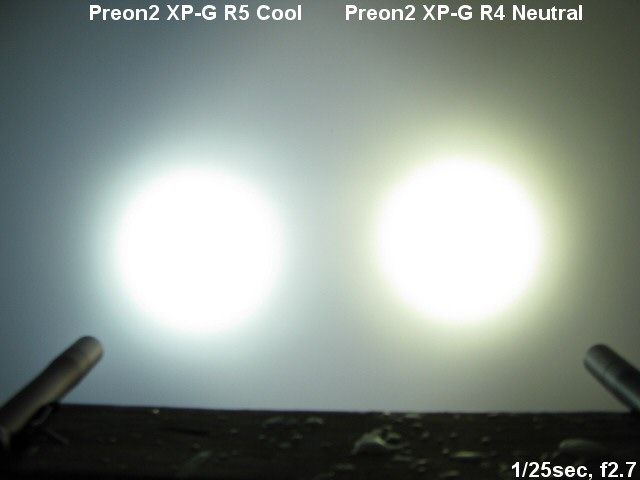 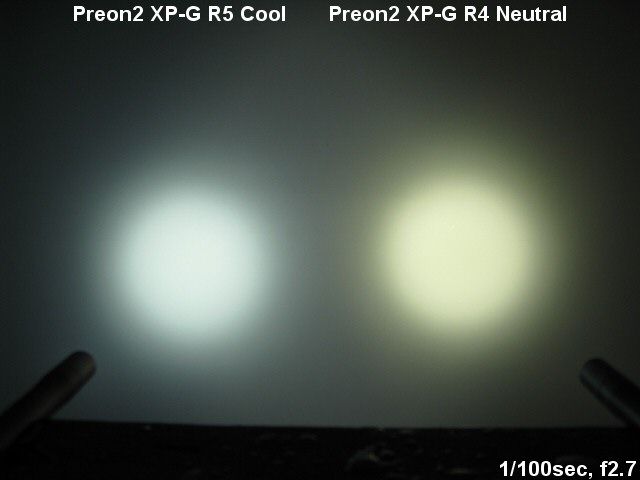 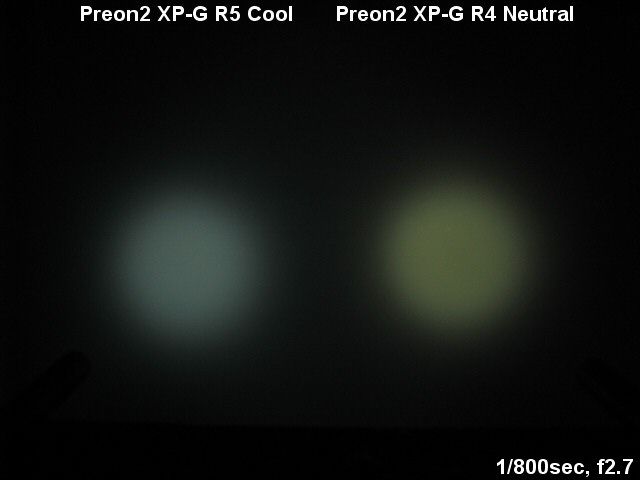 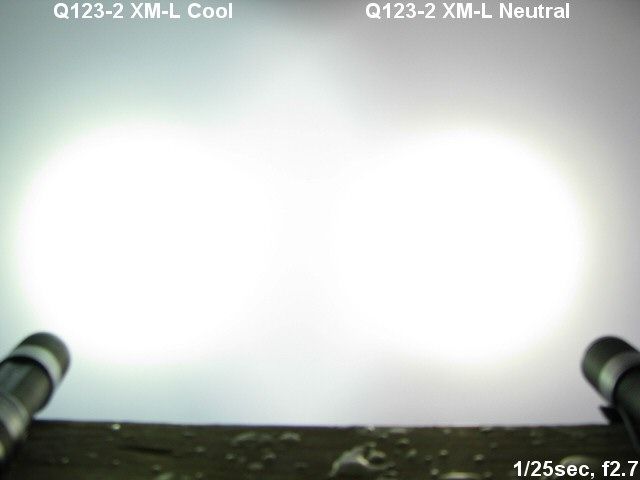 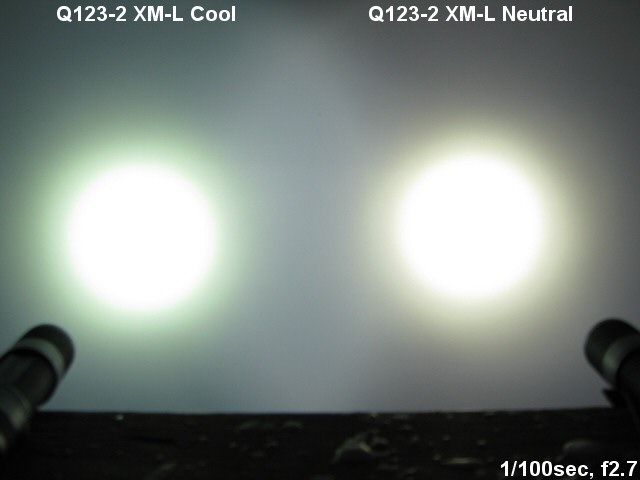 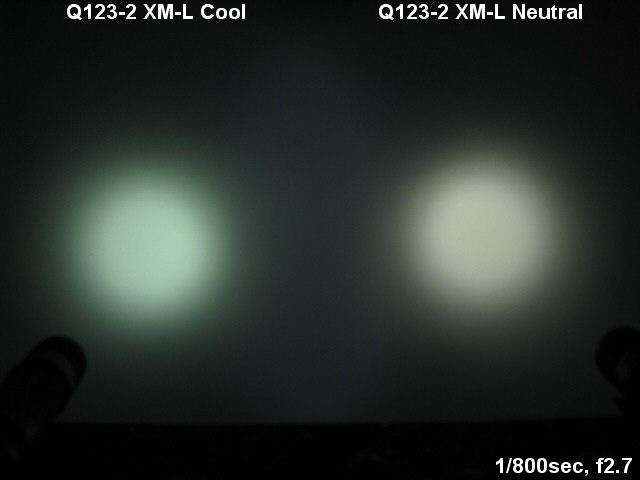 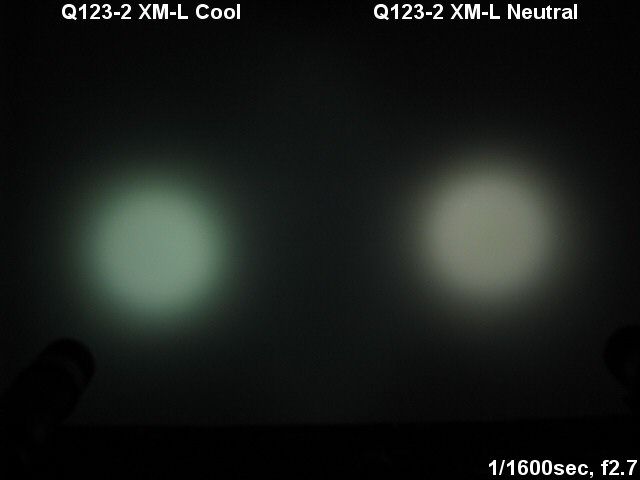 I personally find these Neutral whites to be quite pleasing, especially the Q123-2-X Neutral (of course, your preferences and tastes may vary). These Neutrals are not as "pinky" as some Neutrals I've seen, although the Preon 2 Neutral sample is a bit "yellowy". Note that I find my Preon 2 Cool white to be a fairly premium tint, but my Quark 123-2-X Cool white has a definite greenish cast.

To better show you how various colors look under these lights, I've compiled some common everyday objects and flashlight-related paraphernalia. Control shot taken under my Canon's flash

Below are animated GIFs that show how each Neutral light looks in comparison to its Cool cousin. To make these animated comparisons easier to compare across lights, I've left the Quark 123-2-X lights on Hi instead of Turbo (i.e. closer to the Preon 2's Max mode)

And here are some comparisons showing each of the two Neutrals and Cools compared to each other:

Again, all of the above are done with a "sunlight" white balance (~5200K). Keep in mind that in real life, our brains do their own "white balancing" depending on the source of light.

For more info on my testing methods, plus more information on each of these lights, please see my earlier 4Sevens Quark 123-2-X review and Preon 2 review.

The output level of the Preon 2 Neutral seems to be pretty much identical to my cool white, despite the slightly lower output bin (R4 for the Neutral, R5 for the Cool). Runtime seems comparable on Max.

As expected, the output level of the Quark 123-2X Neutral is slightly lower than my recent Cool white sample. But again, runtimes on Max are pretty comparable. As such, I think you can stick with all the detailed runtime data from my earlier reviews (i.e. I won't be redoing them all).

At the end of day – given the similar output and runtimes shown above - it really comes down to what your personal tint preference is. For that, I hope you found the photo comparisons helpful. :wave:

As always, nice work. And work is very much appreciated. Thank you


kreisler said:
thanks for your efforts.
coolwhite tends to be called blueish, and ..etc..
here i would say that all tints look greenish, especially the NeutralWhite. how come?

Both true. I use GIF because it supports animation, which is incredibly valuable in this context. It also keeps file size reasonable - higher bit depth lossless formats would be huge.

The distortion effects have to do with the method of downgrading to 8-bit. The nearest color method used here makes them grainy, but doesn't produce distracting compression patterns during animation (the way other methods do).

Sent from my handheld device
R

Great comparison! I recently got my first neutral white xml in the spark ST6 460nw and at first glance it was really warm yellow to me. but it has been growing on me as i use it for outside work. Thanks!
M

I hope that for 2012 Cree brings out a 3mm^2 LED, which means upgrades for everybody.
Better throw than xm-l, better efficiency that xp-g, lessened chromic difference from spill to throw.

Such is the new years' wish


Thanks for all the reviews SB!

Take about 7% off those measurements for the Neutral version and that should give you an idea of the output you'll see, that should be somewhere around 450 lumens give or take.

No, because my relative output scale on the y-axis is NOT in lumens. I can estimate lumens based on the analysis described here.

Note that all the new -X lights drop off in output right after 3 mins into the run, to ~350 lumens for both the neutral and cool white samples of the 123-2-x in my testing.

Should be the same as the 17670 above, since the voltage is the same.