Xak said:
I think I'm just misinterpreting what your saying. Not trying to be sarcastic. You win, they're cooler. Whatever.
Click to expand...

"winning" has nothing to do with it
(and that seems like a pretty obnoxious thing to say
considering the only reason I am trying my best to clarify things for the fourth time - is for you).

what may I ask is there to misinterpret about the new 4Sevens bin 4C0/4D0 neutral white being a Cooler bin than the previous 5A NW?

I do understand you wanting a warmer NW than the existing 5A -
but the new run using 4C0/4D0 bin are not going to be
the bin is slightly slightly cooler -
no matter how many times you may wish they are warmer -
they won't be because of the selected bin is cooler. 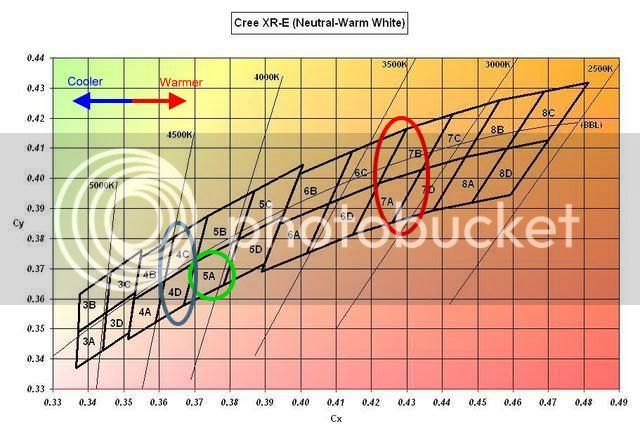 I've marked/circled the respective bins:
the 7A/7B in red is the Warm White bin,
5A in green is the existing NW bin
and the gray-blue 4C0/4D0 bins are the upcoming 4Sevens NW -
the higher the color temperature the cooler the tint -
now granted the the 4C0/4D0 bins are adjacent to the existing 5A bin -
but they are on the cooler side -
so they are going to be cooler than the existing 5A -
I don't think I can be any clearer, or more explicit about this.
Last edited: Jun 23, 2010
You must log in or register to reply here.
Share:
Facebook Twitter Reddit Pinterest Tumblr WhatsApp Email Share Link