Alonefire has a pretty neat little keychain flashlight called the S11, and I'm intrigued to see if anyone else has bought it yet - and if so, what you think!

It's a lot like the Rovyvon Aurora series and the Nitecore Tiki....but it uses an SST20, which gives it a tighter hotspot and more throw than the others. It has several LEDs on the side: white flood, red signaling, etc. The only reliable place I've seen it listed so far is Amazon; it's not even mentioned on Alonefire's own site! (There are also a couple non-US places on the web that have it, but nothing I felt comfortable clicking. Ali carries it, but the minimum order is 10).

So far I've bought one for myself, and a couple for friends. Still testing it out. But here are my thoughts so far - and let's hear yours!

What I like: amazing throw for such a small light; better than my Rovyvon Aurora A8 (which is my current keychain light). It charges via USB-C, which is more convenient and future-proof than the micro USB most keychain lights use. The side lights are really versatile: they have white flood, flashing white, solid red, flashing red, "UV", and a crazy blue/red flashing combo (which honestly feels like it's just designed to get you in trouble for trying to impersonate a police officer.) The UI is almost identical to the Rovyvon; it's really easy to learn, and offers quick access to both ultra-high and ultra-low, which I really appreciate. Magnetic base so it sticks to the car while you're changing a tire? Pretty cool. It's compact, which means you're more likely to put it on your keychain. And since all of us flashaholics know that the best light is always the one you have with you when it's needed, these tiny lights guarantee that we'll always have one on us! (Who am I kidding? As if any of us would ever leave the house with less than two lights...) And the light is currently $16.99 on Amazon, or $10/each on Ali if you buy in bulk. Which means it's a *great* way to i̶n̶s̶i̶d̶i̶o̶u̶s̶l̶y̶ ̶s̶u̶c̶k̶ ̶y̶o̶u̶r̶ ̶f̶r̶i̶e̶n̶d̶s̶ ̶i̶n̶t̶o̶ ̶f̶l̶a̶s̶h̶a̶h̶o̶l̶i̶s̶m̶ gently interest your friends in flashlights.

What I don't like: the UV light isn't great. My Rovyvon is much better; the Alonefire's is more of a basic purple, and doesn't properly flouresce the security strip on a $100 bill. Still, it'll make white things glow nicely. The main LED's tint is also on the cool side; for those of us who gravitate towards warm or neutral tints, it'll feel a bit blue. The side flood light is almost *too* bright; a lower level would probably be more versatile. (Are you listening, Alonefire? A high/low option would be a great addition for v2.) And the light doesn't seem incredibly well sealed (you can unscrew the front and pop the reflector and optics out), so I'm not sure about long term reliability. (But then again, Alonefire doesn't advertise this as anything other than splash-resistant. So far I've accidentally dropped it, and let it hang out in the bathroom while I've showered - and it's still working just fine!) Finally, like all lights this size, the high only works for about 60-90 seconds before it steps down because of heat and battery drain. (But for me, a quick super-bright burst of 2-3 seconds is usually all I need - so I appreciate having those extra lumens for a few seconds!). And the red/blue flashing lights seem like a great way to get yourself in trouble, even if you're just accidentally cycling past them. I really wish that mode was hidden.

Still, I think it's a surprisingly versatile light - at a killer price. I've already converted a few friends into budding flashaholics with this one.

I'm not linking to any of the retailers, so that I don't run afoul of forum policies, and hopefully I'll update this post as soon as I do some runtime, lumen, and torture tests. Until then, has anyone else used this light? And if so, what did you think?
Last edited: May 12, 2021

I just ordered one today along with the jetbeam mini one se. I'll let you know what I think.

AloneFire? Really?
Some say "it's all in a name". But this brand sounds lonely. :wave:

Very cool little light. Magnet is not the strongest. Paid $17.99 on Amazon. Didn't know they also had the GITD model so I ordered that one today for $18.99 with 1 day shipping. I have some pictures but I am not sure how to post them.
Last edited: Jul 7, 2021 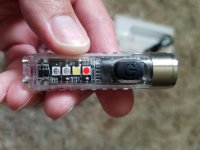 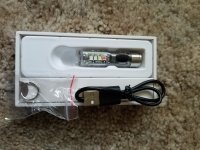 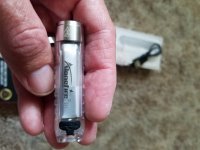 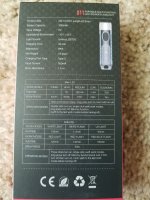 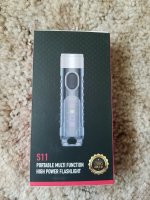 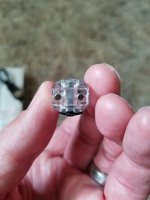 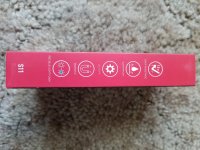