Any suggestions for compact 18650 lanterns

I want to buy two small lanterns with one or two replaceable 18650 batteries.
I'm looking for suggestions.
I'm trying to stay with 18500 batteries for logistic reasons since I also want to buy a Wurkos HD15 headlamp. Any feedback on the Wurkos is also welcome as well as suggestion for another headlamp. .

This one (on Ali Express) with remote control seems interesting, but the battery isn't removeable.
Does anybody has experience with it ?

I have and use the Sofirn LT1 which has both tint mixing, stepless ramping and can serve as a battery bank, I think its a good lantern.
S

I just entered the world of Zebralight and I’m very impressed. The photo shows a Zebralight S64c LE with a silicone rubber diffuser I found on Amazon. I removed the standard clip and added a reversible Olight S1 Baton clip (fits perfectly). I use this with the diffuser as a backpacking lantern and it works great for my purposes. I clip it onto a baseball hat and it works great as an outdoor headlamp (probably not as good for an indoor, close work headlamp). It uses unprotected 18650 batteries, and it is only slightly bigger than the 1xCR123 lights. Good runtime, plenty of levels, and programmable. It might serve your purpose as a headlamp and lantern.

I received the two lamps I ordered today. Delivery was amazingly fast for Ali Express.
Here are my first impressions.
I ordered two of these.
The first one I tried worked flawlessly, but the second one was dead on arrival. No light. It didn't want to charge either, it wouldn't even turn on when on the charger.
I was about to file a complaint, but decided leave it on charge for a while and wait a little to see what would happen. After about 15 minutes the green lights turned on and the lamp started to charge. This means that the battery was fully discharge, there could a be a short that consumes electricity when the lamp is off, or it was packed when lighted. Either, way the battery life is likely compromised.


The battery rattles a little inside when you shake the light. I hope that the company will fix that because on a rough trail this could eventually break a connection. This could be an inconvenience, it would be in most cases, but if you're hurt in the wilderness and need to be rescued, it could be a matter of life and death.
Ideally, the battery should be removable as it is sometime impossible to recharge the lamp because there is a power shortage or you are camping in the wild for a week. Removeable batteries would mean more sales for the stores, because people would buy extra batteries.
The lamp isn't very bright even on high, I'd say about 200-250 lumens. It's enough for most chores around the house or camp but I like more light when I cook. With two lights there is plenty of light to cook very comfortably.

There is no strobe, instead the lamp has three intensities and this is much more useful than a strobe feature. I won't complain for that.

The remote is needlessly complicated. It could do what it does with 2 buttons instead of 4. It is effective up to at least 8.5 meters (28 feet) instead of 6 feet as claimed. Interestingly when you turn the lamp on using the remote, it comes on low, then medium, then high. When you use the switch instead of the remote, it works in reverse order : the light turns on high, then medium then low.

To turn off the lamp at any intensity press the off button on the remote control or press and hold the switch for about three seconds.

The magnet is pretty weak and should be improved. It holds the lamp in any position if the metal surface is large, like on a car hood or door for example or the side of an axe or a shovel, but it will not work at all on a steel tent pole where you may want one.

I recommend this light, but my recommendation would be stronger if it had a 18500 removeable battery.
T

I recently bought a Nitecore LR12 (combined Lantern and Flashlight) which claims 900 hours at 1 lumen from an 18650 / 3400 Mah battery. I just finished testing that using a 2150 Mah battery which gave me 580 hours of light before I judged that it was getting dimmer. This claims up to 1000 lumens at max output so you have several levels to chose from. So if you want long runtime at low lumens, this fits the bill.

Calina said:
I want to buy two small lanterns with one or two replaceable 18650 batteries.
I'm looking for suggestions.
Click to expand...

I am using this lantern.

Calina said:
I want to buy two small lanterns with one or two replaceable 18650 batteries.
Click to expand...

Which color tint do you prefer (warm, neutral or cold white)?

You can't get much smaller than an 18650 flashlight with a diffuser.

Here for example is a Convoy S2+ with the biscotti software, and a diffuser.

The biscotti driver allows one to select output levels as low as 0.01 % to 100%
With a convoy light one can select different color temps, and the maximum output level. 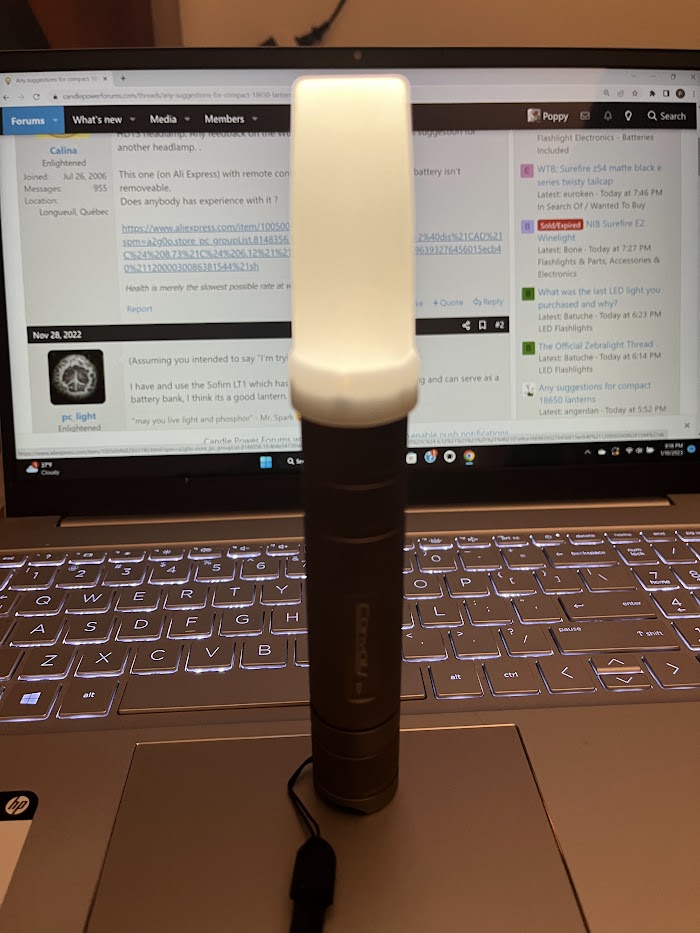 M
Opinions on the UST 30 or 60 day lanterns, or other good lanterns for power outages?

M
Indoor Lantern for use during hurricane power outages