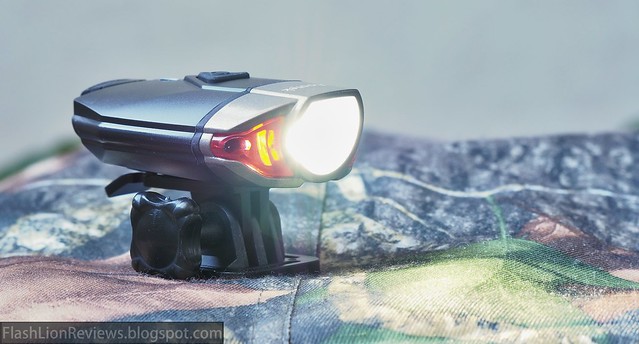 Hello
Aootek sent me for test another interesting light from their catalog.
It is a compact bicycle headlight,that can be mounted on the handlebar or to the helmet.
The bike light has built-in battery which can be charge via most popular microUSB cable,widely used,in almost any new portable electronic device.

​
The bike light housing is made of two different parts. The head is made of aluminum alloy. It is the grayish part on the pictures. The rest of the body is made of black plastic.
Aootek usually offer low priced products,so we don't have to expect something way to complex and special in this light.
Yet the design is quite interesting and as we will see later,the bike light does its main purpose,pretty well.
Price at the time of reviewing $22. You can found Aootek and check the actual price on their US and UK Amazon stores.

​
This is the packaging,as I received it. Carton box in a plastic foil.
All important specifications printed on the sides. 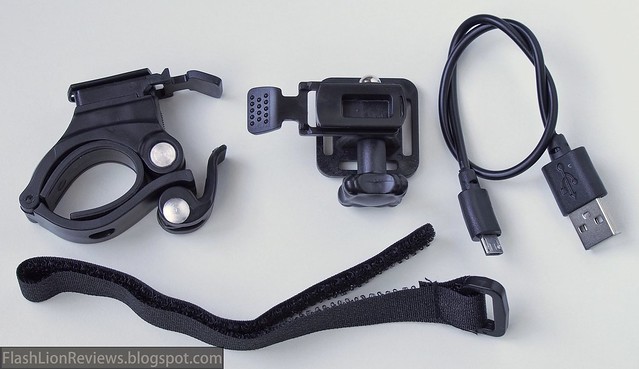 ​
Check out my unboxing and quick demo video.
This is the back of the light. The part with the USB marking is the silicone cover of the micro USB port.
It is meant to ensure good water and dust sealing,but on my sample the cover is too soft and does not stay tight enough to ensure that good sealing.
I would not recommend to use the bike light in heavy rain,etc.
If you need better sealing,some sticky tape may help keeping the cover tightly closed.

​
The top of the bike light. An electronic switch on the left and small window for the indicator LEDs.
The switch cover/button is also made of a silicone material. 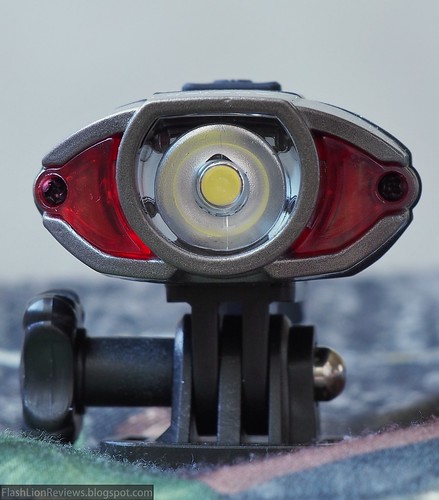 ​
Very nice looking front of the light. Central TIR optic with two red covers on both sides.
Actually they are mostly design elements and do not have separate LEDs underneath.
They get some light from the central LED and this may be visible at some angles,but with the white light turned On,I don't think the red light will be visible enough from a distance.
The red lights are visible mostly when the light is watched sideways.

​
Below is a demonstration of the light turned On.

​
Three pictures from the included instruction sheet.
Well illustrating how to operate the light and how to mount it with the different holders.

​
There are just three modes- two constant brightness(High/Low) and one slow flashing mode.
Operating the modes is quite easy. Briefly press the switch to turn On and cycle the modes.
Mode sequence is On-High-Low-Off
As you may noticed,if you are using the light on its High mode,you have to go through Low and Flashing modes in order to turn the light Off.

​
I know many people like to see the bike light on individual parts,so I took the opportunity and disassembled what's possible.
After removing the head,we can see the battery package,the LED board and the switch/driver board.

​
Relatively thin wires for connecting the battery and the LED.
I did not managed to broke them accidentally while disassembling the housing,but I would like to see a little thicker wires in this flashlight.
Yet,this is not a high power headlight and its maximum current draw is not very high.The light is not designed for frequent disassembling,too.
So the wires are not unsuitable for this light and do their job properly.

​
Small tactile switch,micro controller,a dozen of electronic elements,together with three color indicator LEDs can be seen on the driver board.
We can confirm also the battery capacity and manufacturing date.
According to the specifications the battery is a Li-Polymer type 3.7V 1200mAh.

​
We came to the most interesting part of any flashlight. The LED and its board.
The board is made of aluminum.Tightened to the head housing via two screws.
We can see also the thick water sealing gasket,which sits between the head and the body of the bike light.

​
Removing the LED board,we can see that the contact surface with the head is not so large.
Good news is that I can feel the heat coming from the inside after using the light for few minutes,so the heat is still transferred to the metal head,at some level.
The TIR optic has a silicone gasket as well.
According to the specifications,the LED used in the light is a Cree XP-G. I am happy to report that the LED is actually the second generation,which is the XP-G2.
This ensures better efficiency of the bike light.

​
While charging,the LED indicators inform for the charging state.
A yellow Led light while charging.Green light when the battery is full.ED informs for battery power below 20%,while in use.
Interesting to mention is that the LED indicators are extremely bright,and more specially the Green one.
(easily seen on the animated picture below) It's not pleasure to see directly at their beam.
350mA max charging current. Quick calculation shows about 3.5 hours for fully charging the battery.

​
As usual I test the Runtime on any reviewed light.
The lowest modes take a lot of time,so I usually test only the highest mode.
Below is the runtime graph of the Aootek bicycle light.
Fully charged battery at the start.I left the light On as long as possible,but at the last part of the run,the output was very low and took quite a long time.I had to stop the test.
Unexpectedly,the initial lumen output was much higher than the stated from the manufacturer.
I measured about 400 lumens initial and 370 lumens 30 sec later. This is really a good result for such a small and not full metal body light.
To prevent overheating,the driver does decrease the output about 2 minutes after activating.
High mode is PWM free.
The second lower mode is PWM adjusted,with 100Hz frequency of the flickering.This is the lowest PWM frequency that can be found in a flashlight.
The third flashing mode has frequency of 3Hz.

Depending on the ambient condition-fog,humidity,dust,the 220 lumens after step down could be quite enough for short to medium distant illumination,according to the bicycler requirements,of course. If you drive slow,low output could be enough for seeing bumps in the dark. The output also should be enough for easy noticing by cars.

Beamshots
1 meter distance,White wall
​
As you can see from the pictures,the TIR optic is projecting a square shape beam,which is actually the shape of the XP-G2 LED core.
The beam zones blend pretty well at close and long distance,without noticeable signs of the usual for TIR optics circles,artifacts or unusual beam forms.
The light is Cool White light with some bluish hint.
Overall I found the beam quite pleasant and acceptable for a low priced product. In all cases,a Cree XP-G2 LED is always a better choice than any of the cheap generic LEDs. 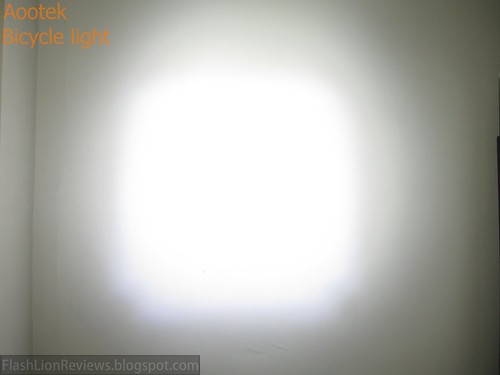 Beam at 5 meters
The TIR optic and the Cree XP-G2 LED work pretty well together and the produced beam is much better than I expected.
​
Smooth beam without noticeable artifacts or distracting dark zones.
I would define the beam as a good quality one. Effectively suitable for bicycle riding.
I had no chance yet to take some outdoor beamshots for better demonstrating the beam.