Black Friday 2021: what light(s) did you purchase?

I know, I know we haven't eaten the dang turkey yet but here we are……

I bought a pair of big ole hard anodized grenade grip Maglites (so far). That will likely be it but if the right company sends me the right coupon there may be others.

I have my eyes out for a single AA headlamp and a bunch of Energizer Ultimate Lithium AA cells. If I don't find the headlamp, it won't hurt my feelings. The AAs are to feed my ZebraLight H53W.
R

There's a few Olight's on sale on Amazon just now. Bought the Olight Perun 2 headtorch for £60 instead of £80. Will make a nice Xmas present for someone!
B

I bought one of those new olight i1r 2 pro’s in blue, and just now I finally found a surefire e2d defender ultra 500 lumen, new in box. Pretty happy about that one as it’s been on my list for a while.

WOW..You guy's can still afford flashlights?
I bought a pair of Maglite Solitaire's an Led and a Ican Nov of last year.

I'd been wanting a spare Elzetta G 123 for a while so today I used code 'blackfriday21' at checkout and got 20% off. Good until 11/30 on everything in their web store.
Went on and added a 3rd G-AA for a Christmas present.

Had a bunch of batteries in my cart at battery junction until I saw shipping cost! Ouch back to eBay 😂😂

I haven’t bought anything yet, but I am shopping. Fenix just started their 20% off everything sale. I’m considering a Nitecore 21700i lantern/charger/powerbank kit.

And just now, I was looking at the Nitecore MT10c and EC11, and was very disappointed to find out the EC11 is discontinued. The MT10c has no direct, one-hand access to the red light mode, which kind of makes the red light mode totally useless. In order to access red light mode while the unit is off, you have to hold the mode button and simultaneously depress the tail switch. WTF??

The EC11 had direct access to the red light mode with a single button press, and a more sensible 40 lumen output on Low when used with a 3V CR123A. So, at the moment, I’m trying to decide if I am interested in tracking down an EC11, or not.

I’m looking maybe for something that can take an RCR123A and/or 16340 to replace my old Leatherman Serac S3, in which I am afraid to stick a 3V regulated RCR123A due to the excess length. I was thinking maybe a Fenix E18R (out of stock) or one of the Nitecores, when I discovered the difference between the EC11 and MT10c.

It’s also a bit disappointing that the EC11 and MT10c both have no modes between 1 lumen and 40 or 50 lumens (with 3V battery). It would have been better if the Lower Low mode was 5 lumens.

I also might maybe get a Nitecore LR10 CRI mini-lantern for my backpacking kit, in which I’ve standardised on single AA lights, just because it’s cute and effective. But I really don’t need the additional weight in my pack.
J

Maglite seems to be having 12% off. Got this in my email and it seems to work on the things i tried.
the code is: BFCM12 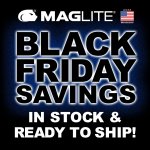 I am going to order some ML25IT's and other random things.
J

Trying not to buy another Thrunite Th20. Under $25 today.
C

thermal guy said:
Had a bunch of batteries in my cart at battery junction until I saw shipping cost! Ouch back to eBay 😂😂
Click to expand...

I guess it depends on how many batteries you get, cause I ordered 50 cr123’s and shipping was free.

junkman said:
Maglite seems to be having 12% off. Got this in my email and it seems to work on the things i tried.
the code is: BFCM12

I am going to order some ML25IT's and other random things.
Click to expand...

Thanks for this. I just bought the green XL50.

Earlier this evening, I ordered a Nitecore EC11. Now I just need to decide what battery to put in it, and order that.

I've got a bit of a craze on Keychain flashlights at the moment, so I ordered two Rovyvons, the A5X and the A4 Ti Pro. The A5X has already arrived and I'm blown away by its versatility and 650-lumen, momentary Turbo. The A4Ti Pro hasn't arrived yet but it's a beautiful shiny object.
Share:
Facebook Twitter Reddit Pinterest Tumblr WhatsApp Email Share Link

H
What did you get for black friday (flashlight related)?
2 3

R
What are you buying this Black Friday Sale?
2 3 4