Blast from the past thread

This one has a nice creamy neutral tint.
View attachment 35396
Click to expand...

It might even be true that I was involved in a few of those early P60L threads here and I may have been one of those leading the charge against the P60L, but it had more to do with how SF was advertising the runtime, which was pure fantasy on their part (I believe the word I used often back then was "lies").

This was also around the time Malkoff had started selling his M60 drop-in's and let's just say there was no comparison.

Thanks for bringing back some memories!

My first G2L was black and had such a bad tint in the 65 lumen P60L it made my fire engine red truck look grayish purple. Now I could still tell the difference between a person and a pizza box but it had an awful blue tint.

My oldest Malkoff module aint much better though. The (patent pending) M60T I use in a Pentagon eX2 has a mixture of purple and yellow areas in the beam. I just figure there was a point in flashlight history where there was a lot of ugly tinted LED's.
B

I remember way back. LED's were a new thing for flashlights. Very dim but had better run times than incandescents with their filaments. On the forum there seemed to be two kinds of folks...those that loved the long runtimes dim LED's offered, and those that loved the bright incandesents. Was almost ugly here. The Surfire crowd with their crazy small and bright 60 lumen incandescent beasts. And a few LED lovers who were looked down on.

Stick 4 of these Nichia's in a head and 40 lumen magic. Insane!!! Almost as bright a those Surefire boys toys. But the beam was all flood. Don't think anyone thought Led's would ever overtake the incandescents found in Surefires and the like.

Surefire company was the last to adopt leds...they had to cave in...or get left in the dust.

Here's a pair of 1x aaa lights from the past with kubatan aspect. 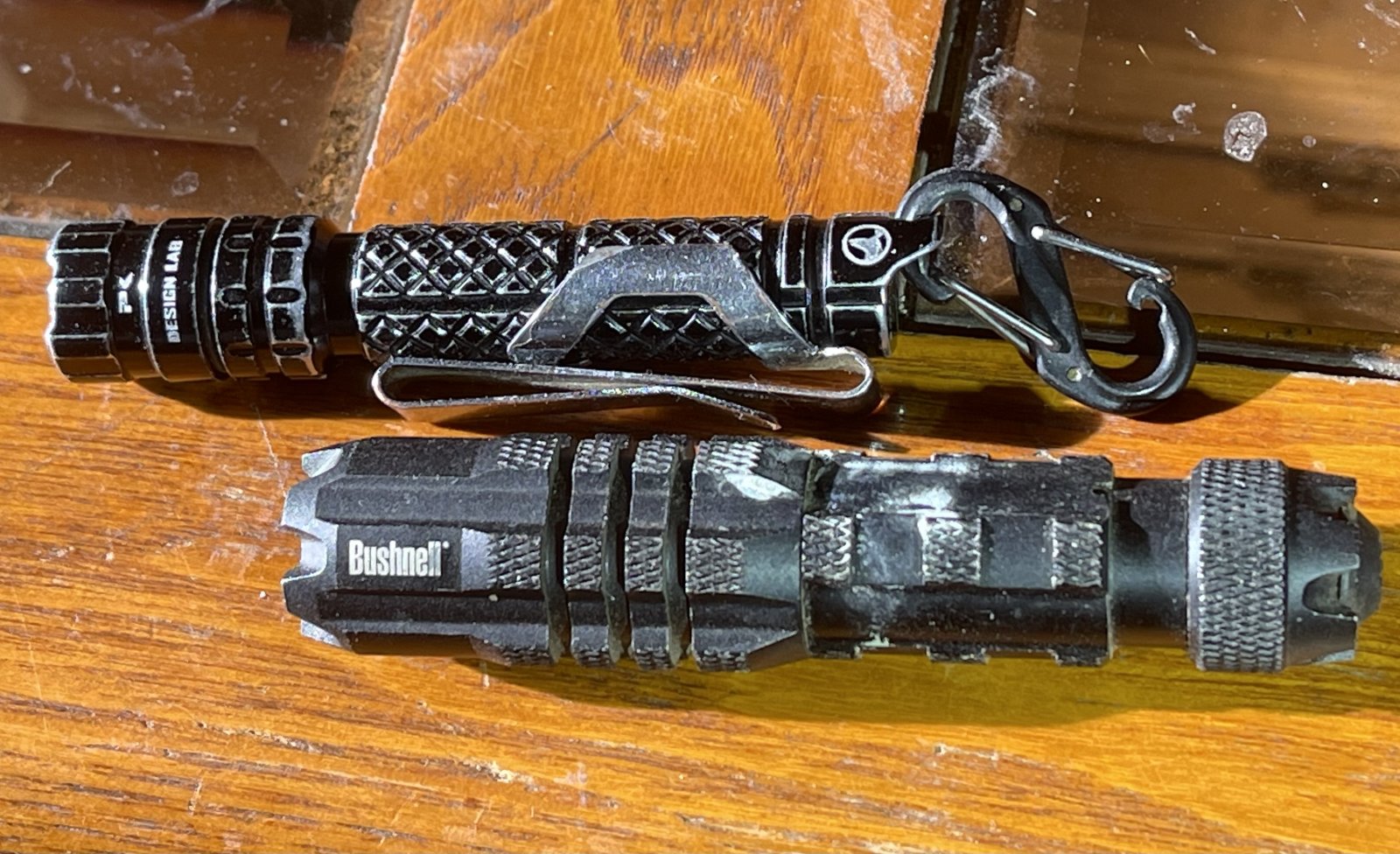 The PK light was a light idea from his days at SureFire that never made it past the design point and in 2014 when he started PK Design Lab a prototype was developed. It went into production in 2016. At 110 sustained lumens from an ultimate lithium battery meant for about 27 days it was the worlds brightest triple a flashlight.

The Bushnell was a Wal Mart purchase that came in a limited edition twin pack one year at the holidays. It also included a 2x 123 light. It has a bit of a Klingon flare to it. At 55 lumens it was pretty bright at the time.

The PL-2 is a twist head with a low option of about 12 lumens. It's regulated to hold steady at wide open until the battery cries uncle. It starts on high and is considered water tight due to dual, oversized o'rings that also prevent accidental pocket turn on. It's a 1.5 volt light.

The Bushnell is a forward tailcap clicky, 1 setting light that dims as the battery depletes. 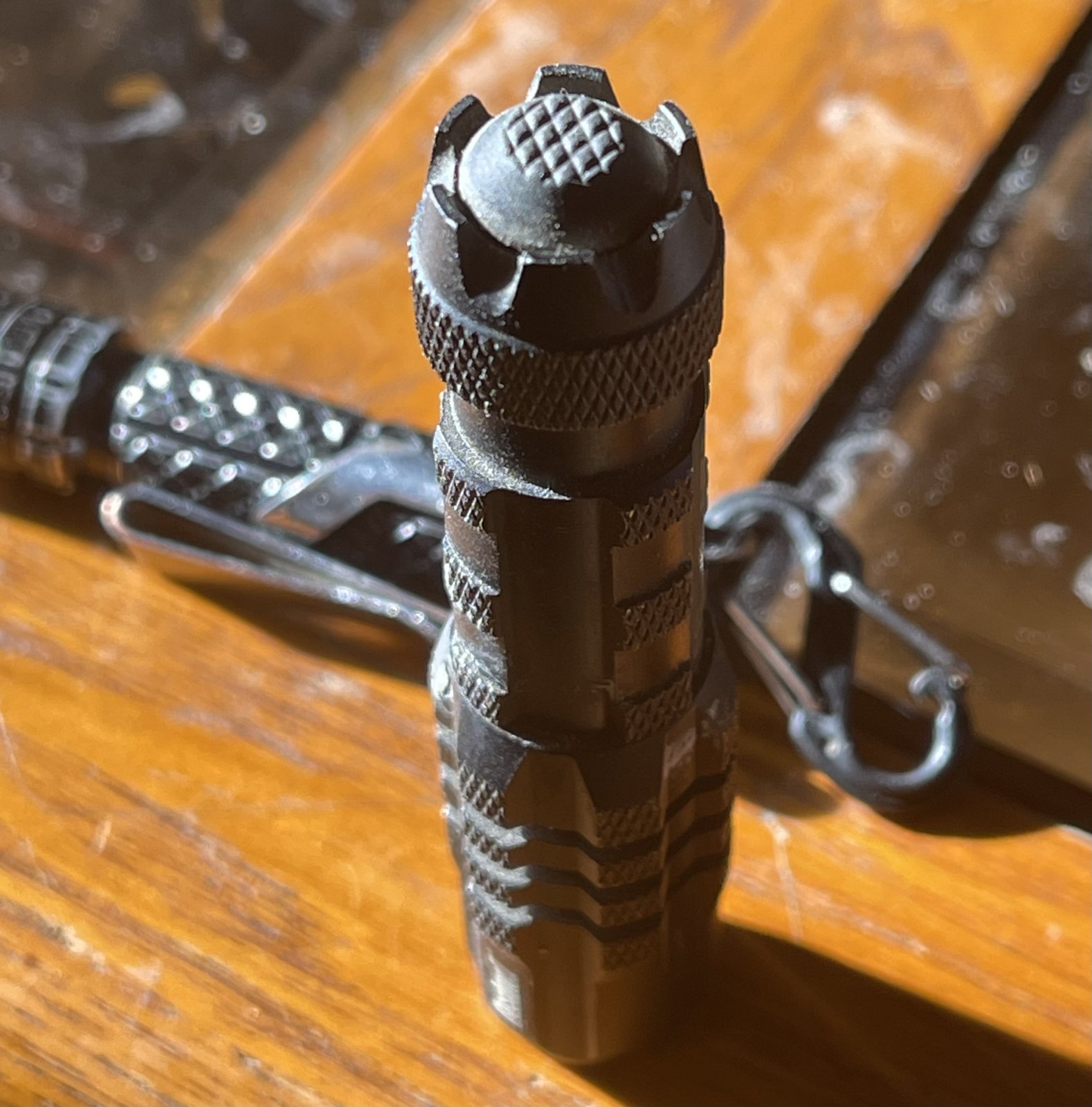 Now, it's not very thirsty so it does seem to hold the beam much better than many of the unregulated lights of the time that seemed to look dimmer in seconds.

The Bushnell was not very pocket friendly due to the many course areas at each end. The PL-2 looks mean but edges are not course, yet are squared enough to be a very effective kubatan. Niether light tail stands. The PL-2 has a keychain aspect, possibly a primary light where the Bushnell was more of a backup light. 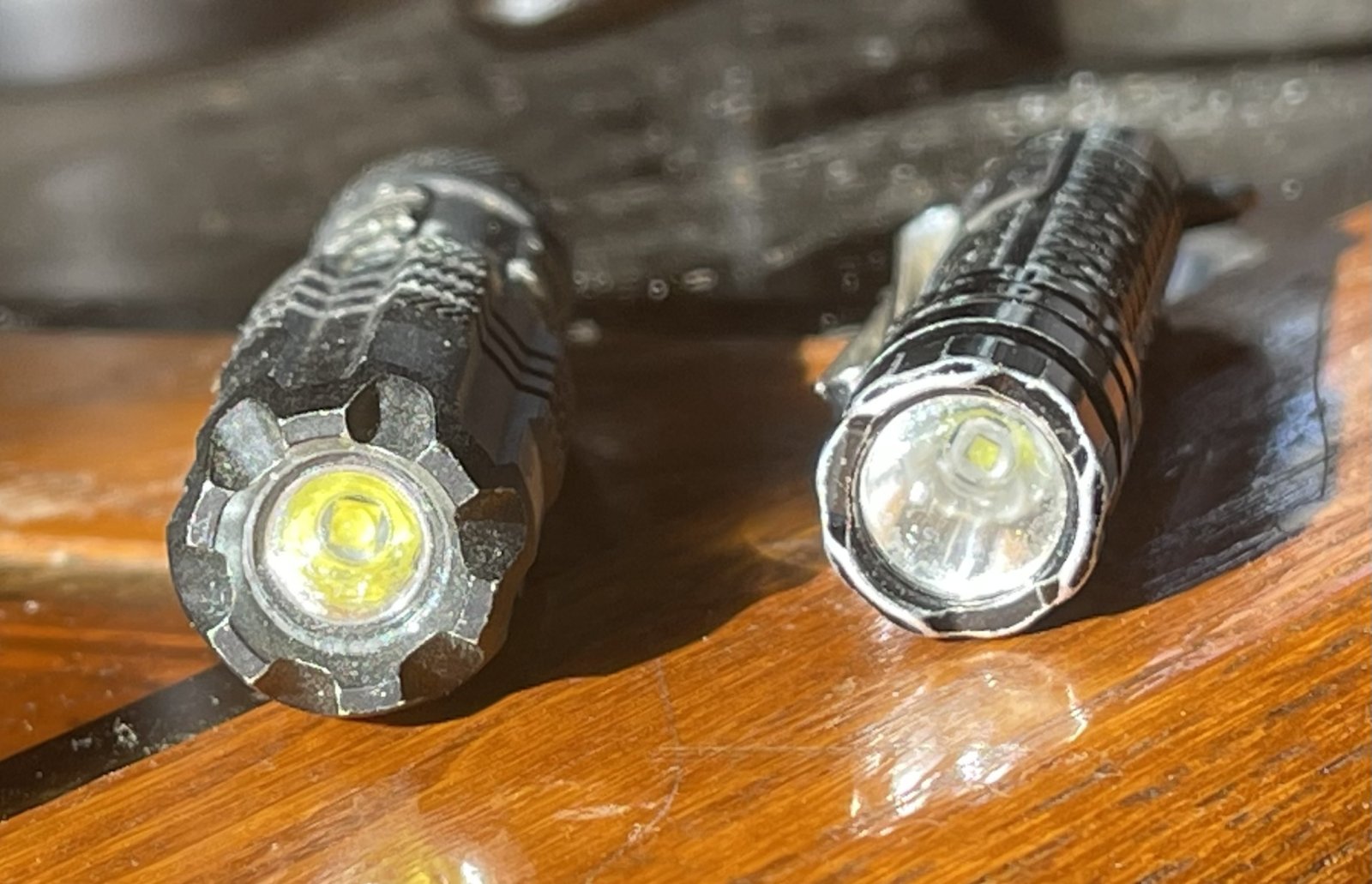 The Bushnell appears pretty bright because it's floody where the PL-2 hides its ability by being more of a thrower, which is part of my it could be a primary light in a dark alley.

The PL-2 used a novel coating called PVD that was pretty tough without being electrocuted to the body. It was a bonding process to apply layers of coatings where the Bushnell used a conventional anodize method.

PK said he conceived the PL-2 at a time when their were no triple a batteries with enough horsepower to drive it. The ultimate lithium was the catalyst that brought it to reality. Soon after lots of products came about that touted even more output, but quickly fell back to about 2/3 of the PL-2 output.
Z

Two gateways for me.
The SureFire G2x Pro D version and the turnkey Malkoff MD2 hi/lo #3588 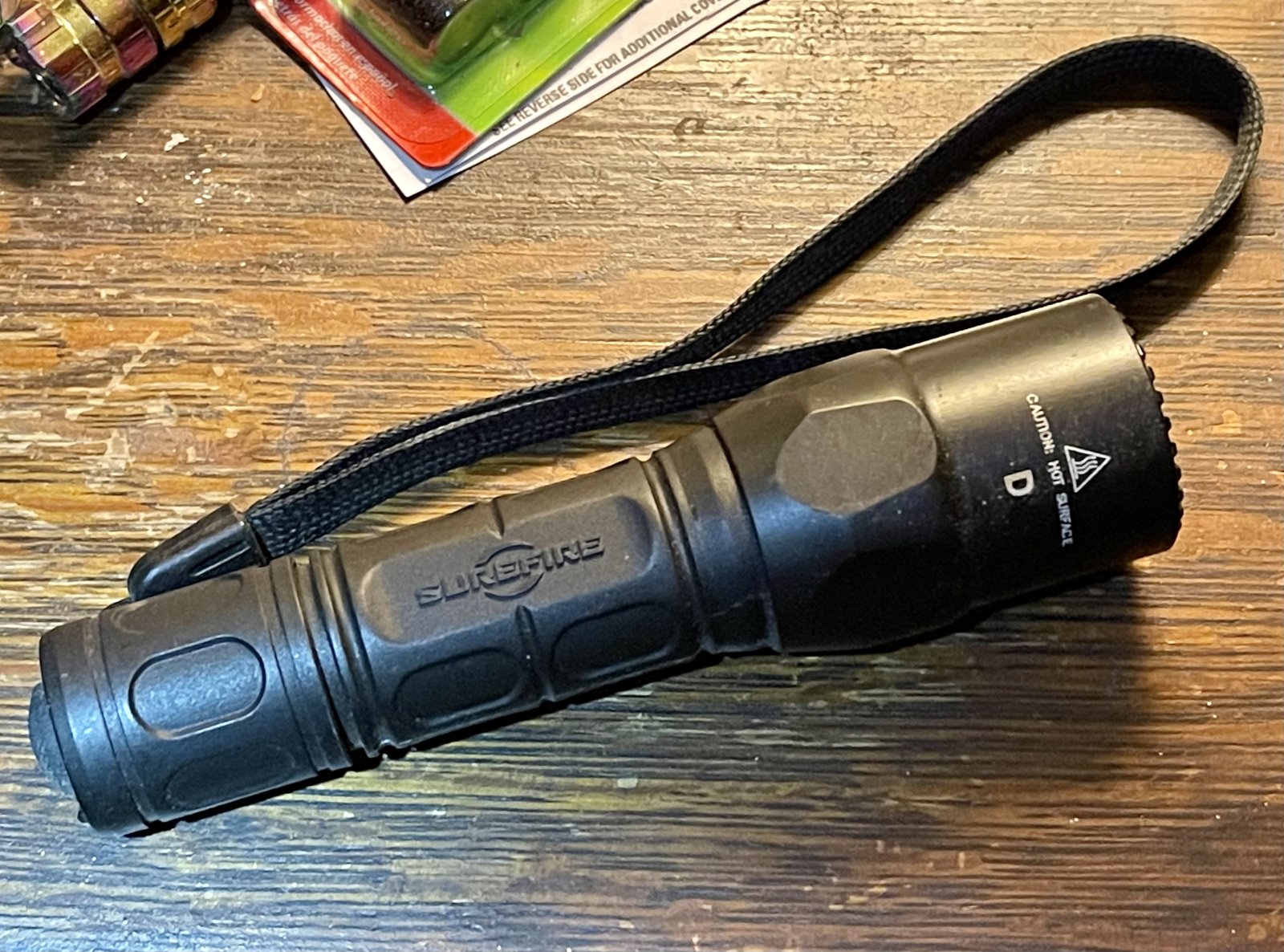 This SureFire was my first SureFire. Simple to operate, great beam, easy to deploy and $55. In my view one of the best general purpose flashlights ever made. 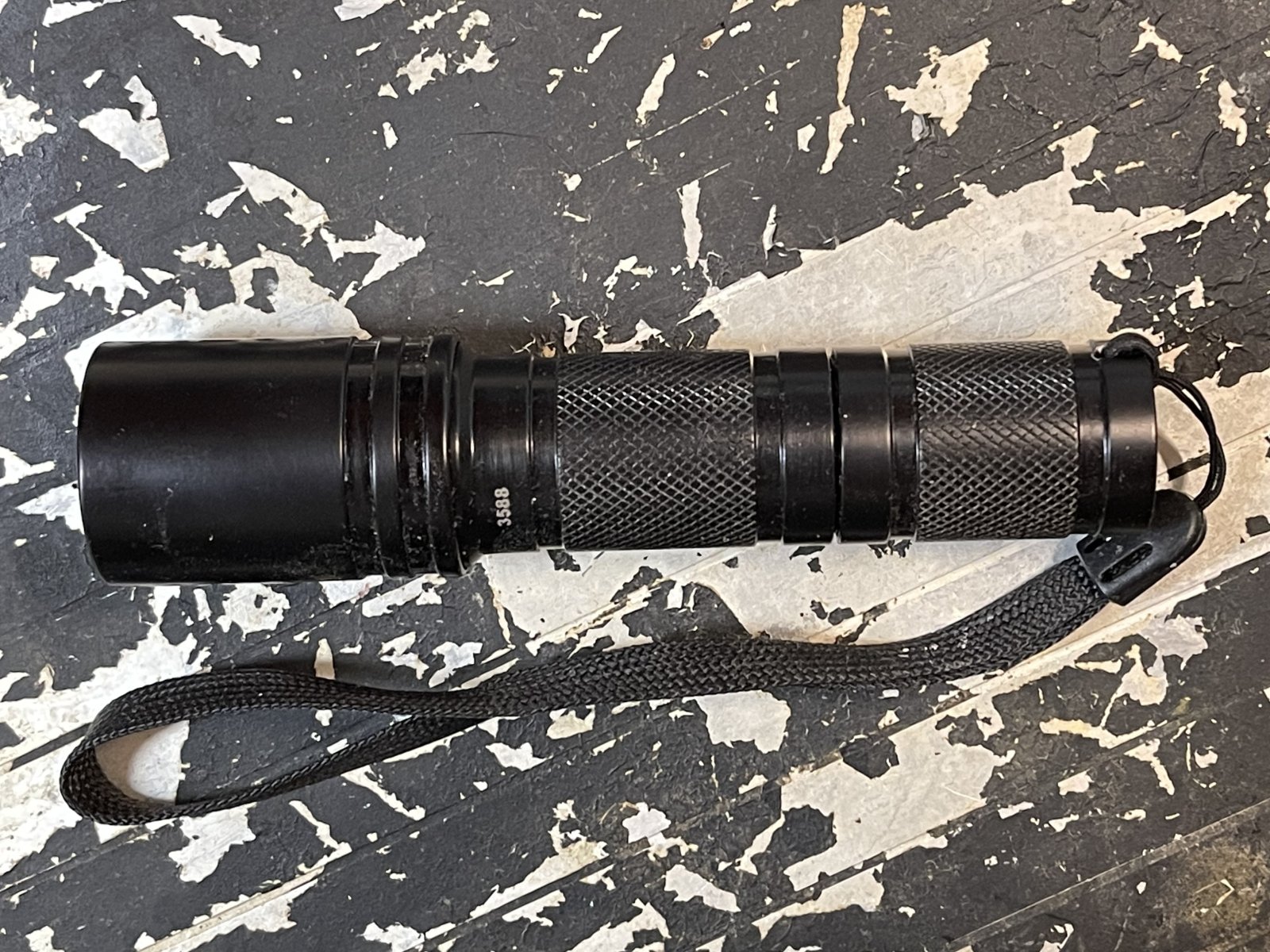 Actually this is my second one. The first one was sub 1900 serial number I gifted to a fellow who rebuilt a hot rod Honda engine for me.
What a great flashlight this one was/still is.

It runs off CR123 cells in a Powertac magszine 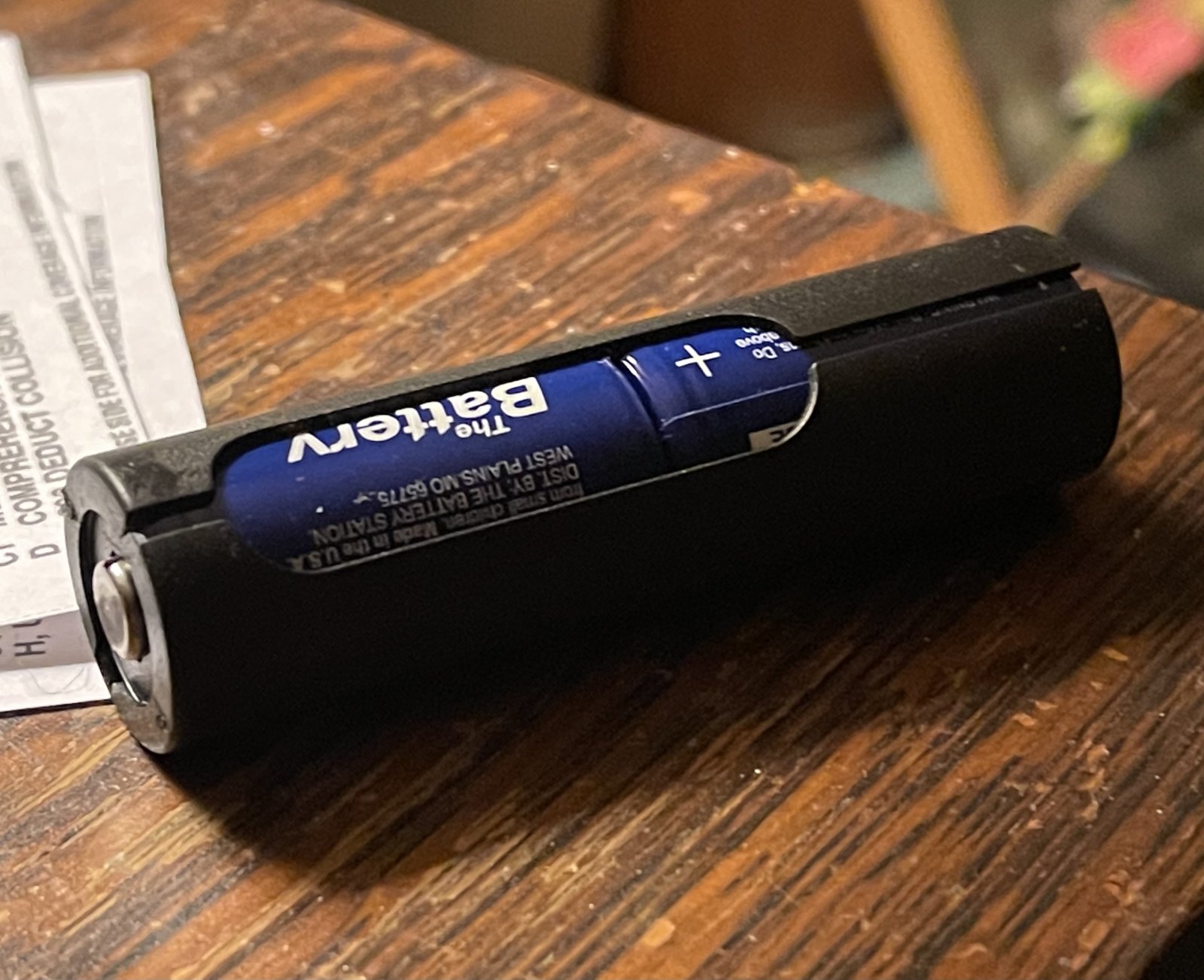 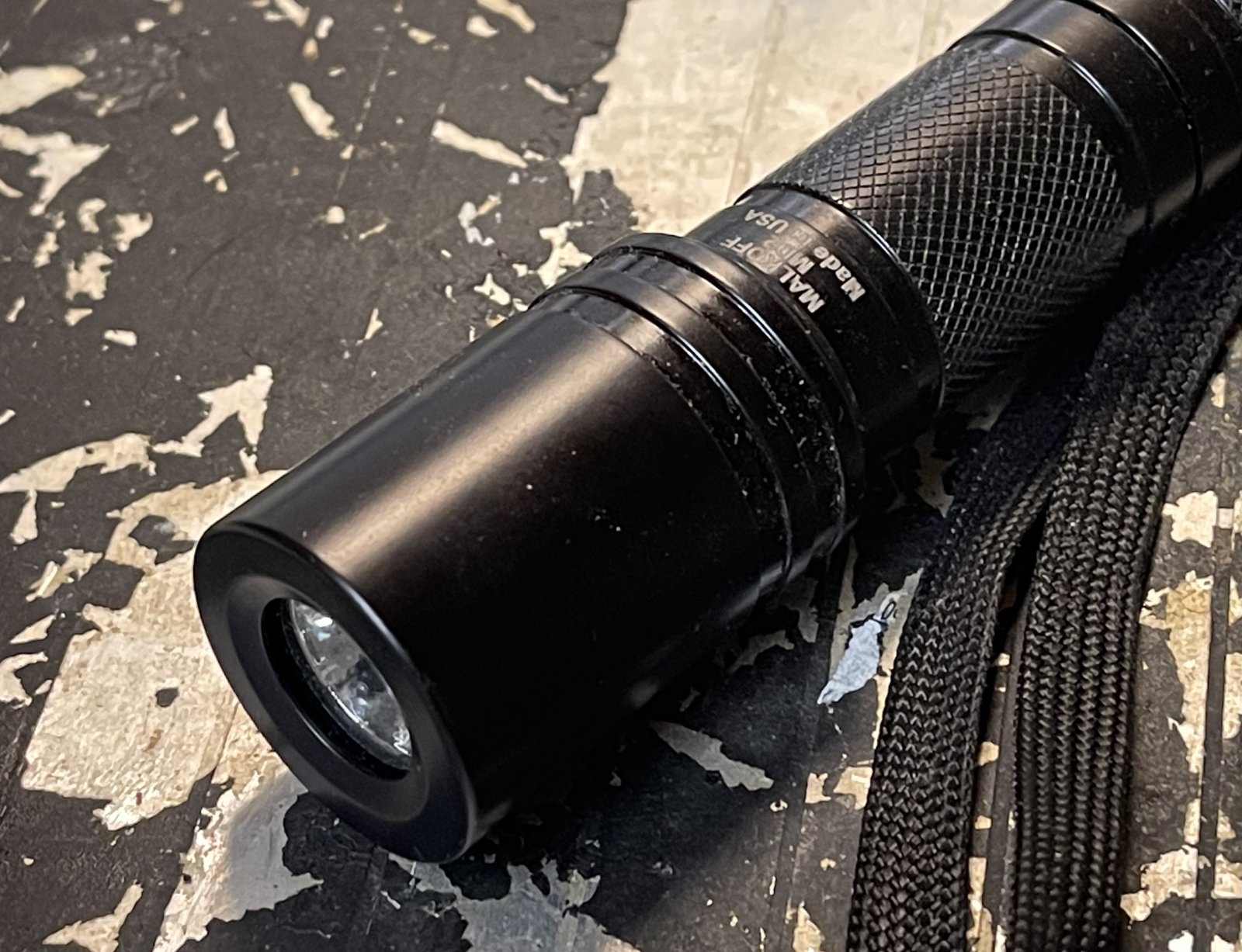 Such a small opening but the beam is huge.
The 325 lumen XP-G2 was brighter than the numbers suggested, and the hot spot to flood transition is a sight to behold. 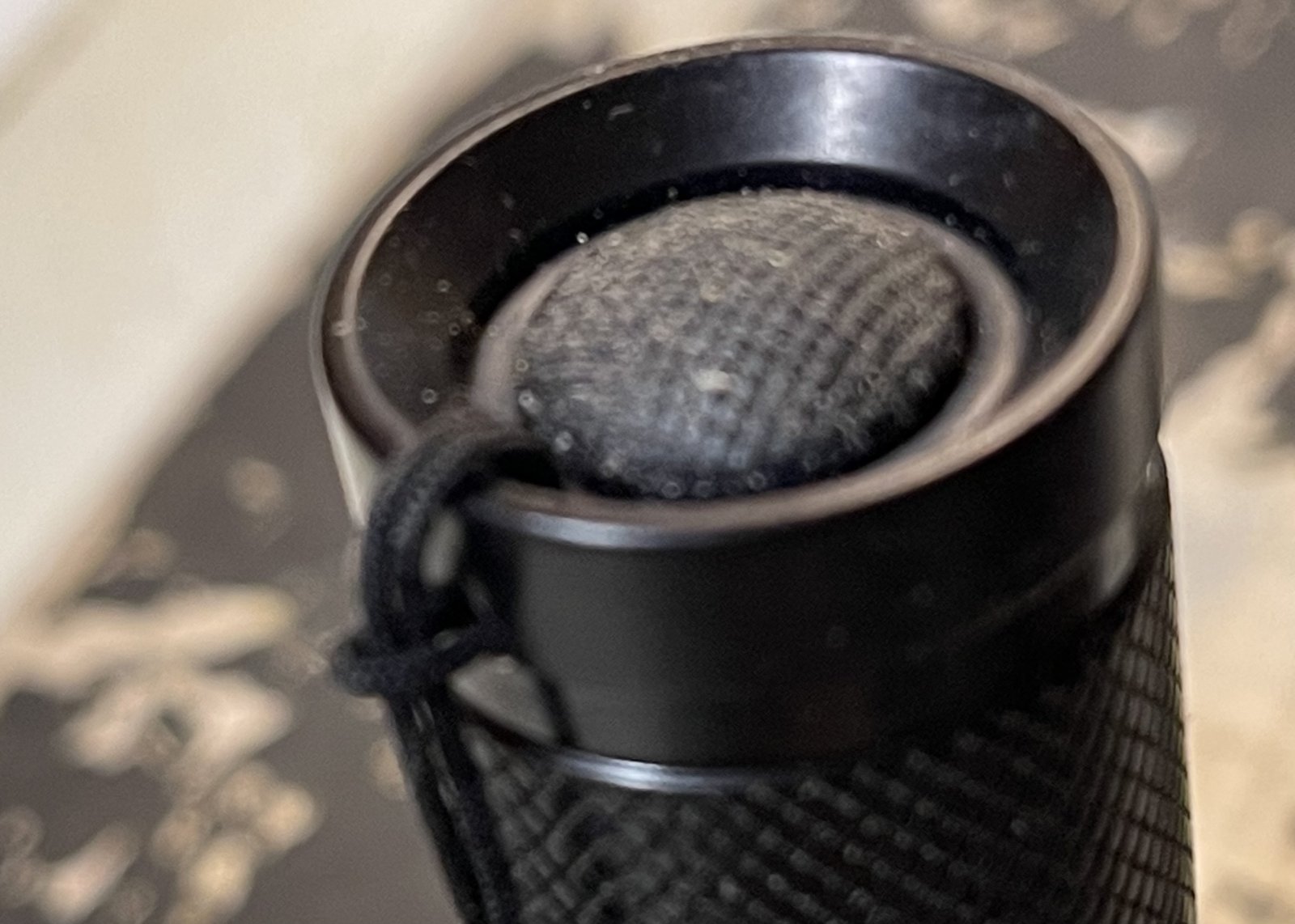 Wrist strap attached to the tailcap.
When I bought these lights I put wrist straps on nearly every LED flashlight I owned. A Coast HP7 got that habit started.

I don't use either one these days. Simply put, I'd rather keep them mint. But a yellow G2x Pro (D) gets the nod pretty often. And a round head (beater) 6P with a Malkoff tailcap and warm M361 is pretty close to carrying an MD-2
You must log in or register to reply here.
Share:
Facebook Twitter Reddit Pinterest Tumblr WhatsApp Email Share Link

B
Duplicate thread, me bad

The Zoo on the Blue i3T from Olight

A
MT3-18350-Titanium-Add the auxiliary light of seven-color flowing water.（The price of stonewashed and titanium primary colors are the same）