Mrs Fixer has been out of town recently. The first week I did not have potato chips in the house. I cooked meals not normaly involving potato chips anyway but had a craving for them. Week two, same thing.

The Lovely Mrs. Gardiner enjoys potato chips with her PB & J sandwich. Me, not so much.

Yesterday's weather was sunshine, then rain, then hail. We BBQed inside the garage. 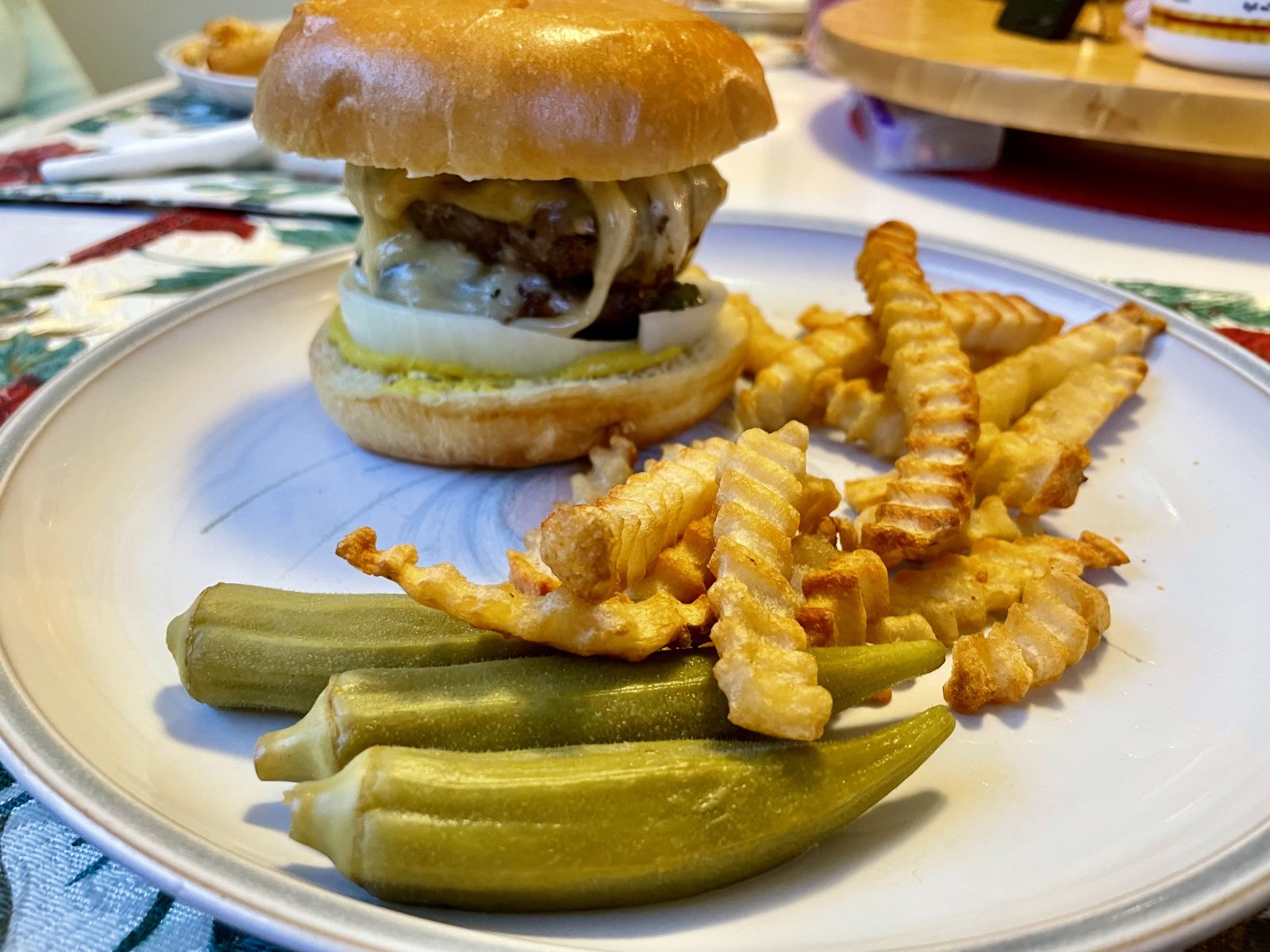 Wednesday's breakfast:
Home fries, with cheese, and some Salami.
Seasoned with salt and pepper and some "Italian seasoning". 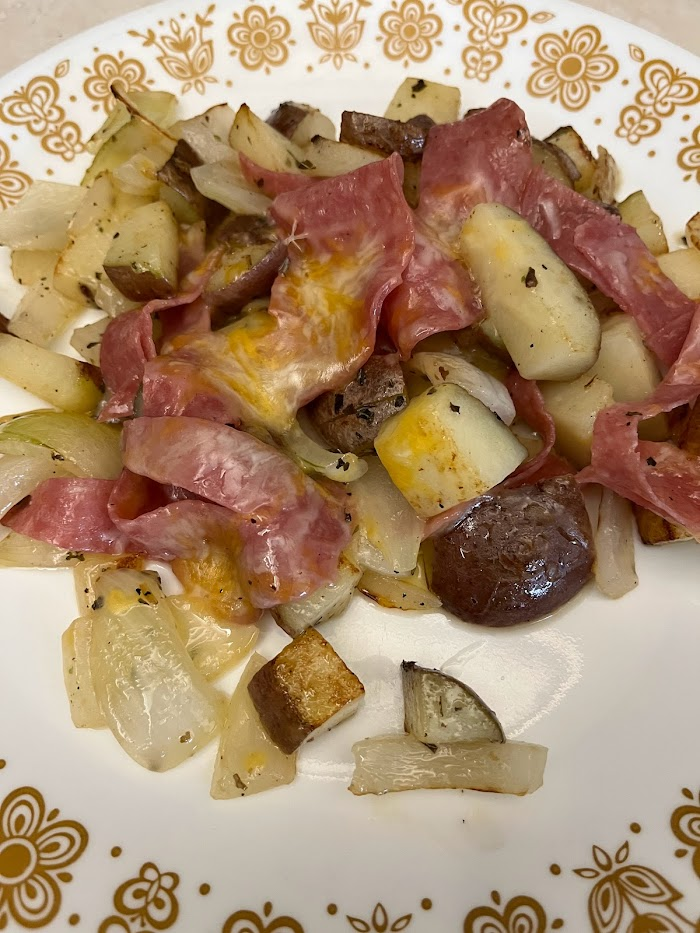 Yesterday's breakfast was similar but a little different: (variety is the spice of life!)

Home fries, with ham, yellow squash, of course three cheese Mexican, some salt and pepper, and some "Italian seasoning". Dressed in some ketchup. 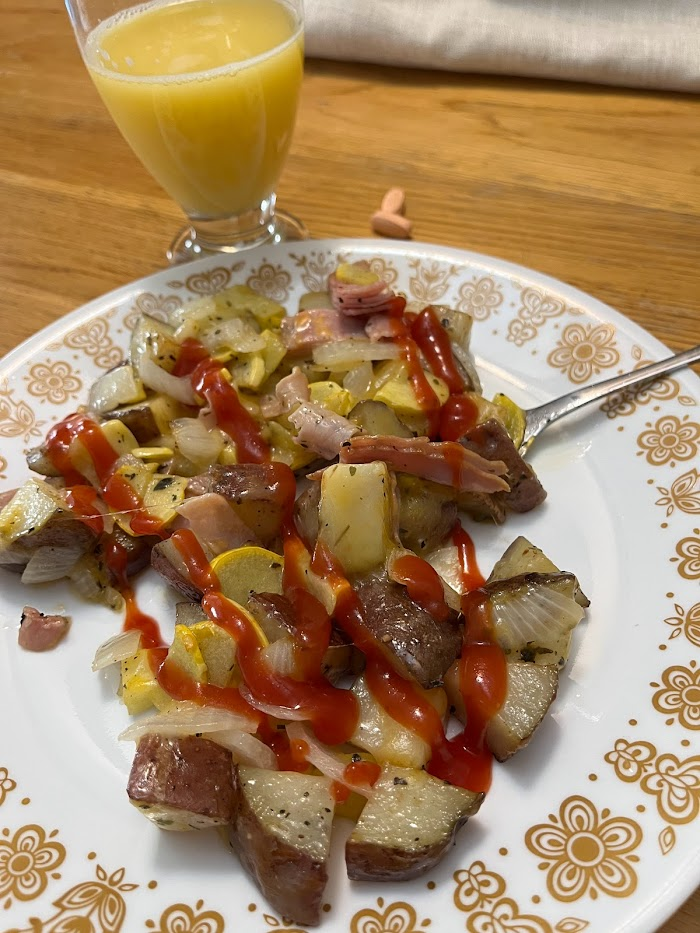 I know... it looks like maggots on a plate. 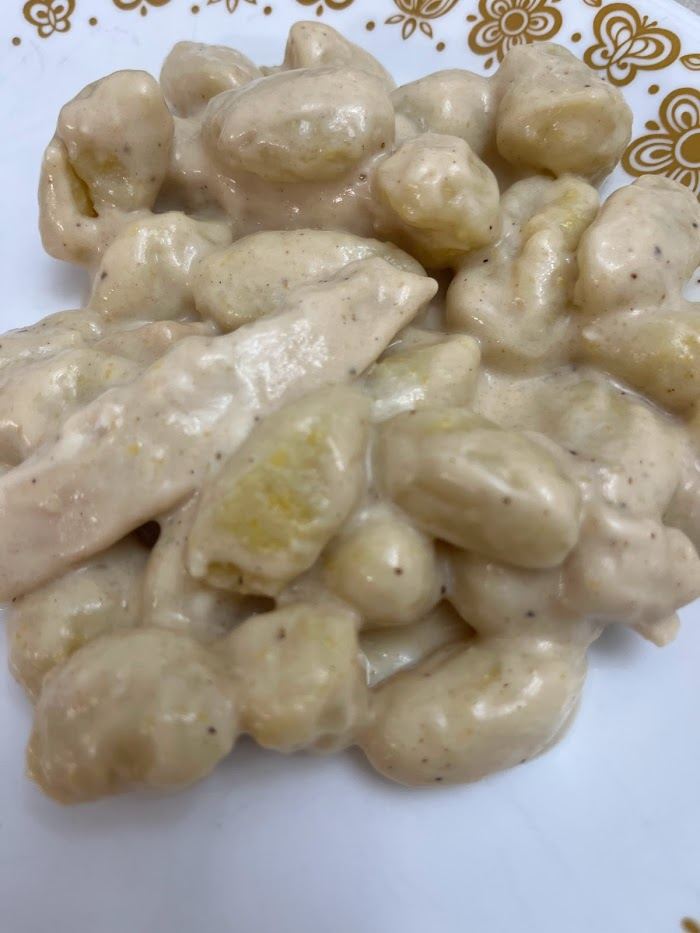 a tablespoon of your favorite seasoning.
some salt and pepper

Set a gallon pot of water on the fire.
Season your cut up chicken with salt and pepper, and your favorite seasoning.
fry it in olive oil, and part way through add half a cup of Marcella wine.

Let it simmer a bit.

In the mean time throw your gnocchi in the boiling water.
Cook it according to directions.

combine the cream of chicken soup, sour cream, and seasonings ( salt and pepper, Nutmeg) to taste.
Heat it up a bit.

When everything is done, mix them all together.

honestly, the last time I made this, I used cream of mushroom soup, and fresh sliced mushrooms. It was much better, but my daughter is allergic to some mushrooms, so, they were deleted. 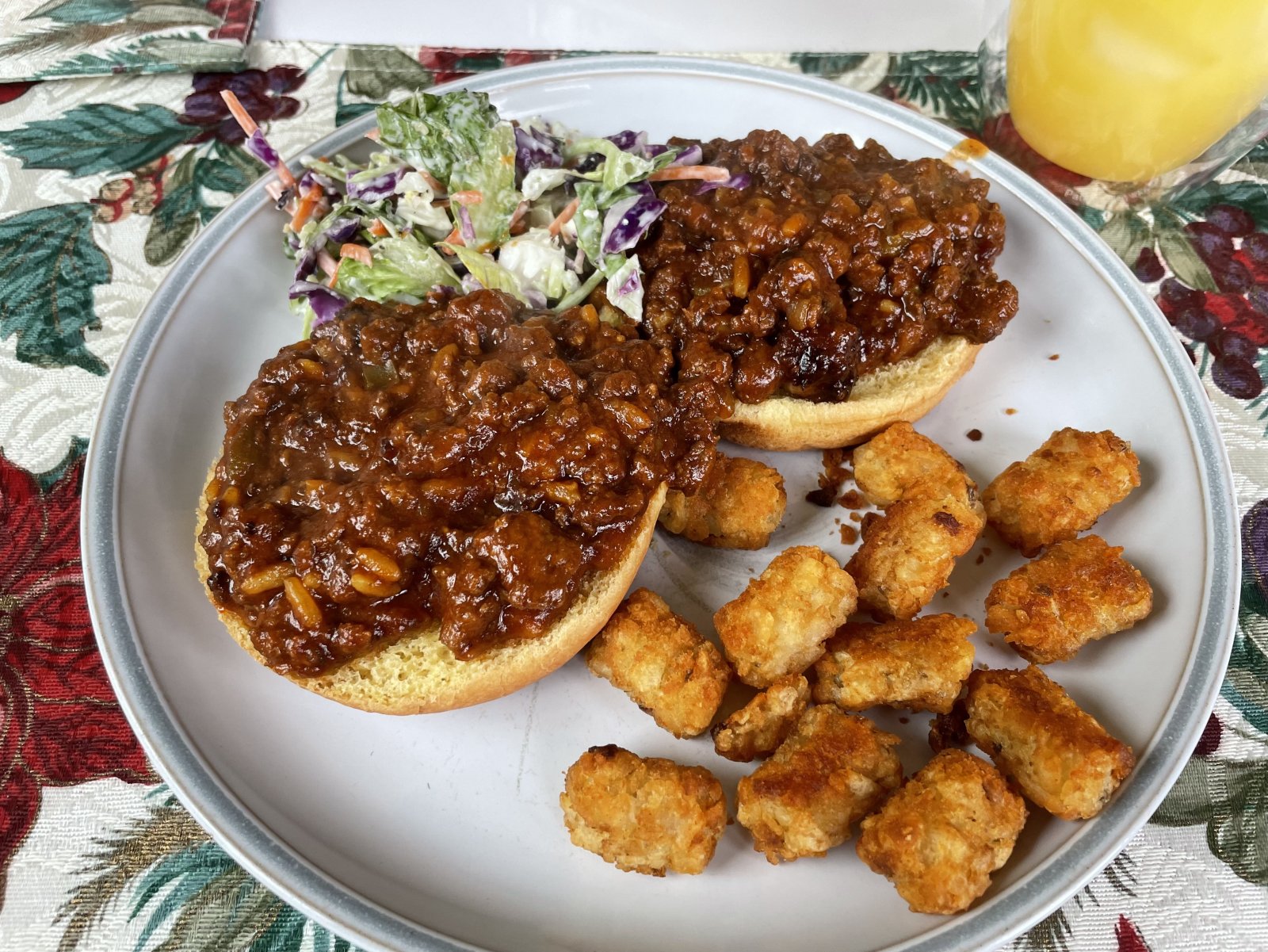 The recipe included tomato soup. In a hurry, I grabbed tomato rice soup. It simmered five hours in the slow cooker. Yum yum. 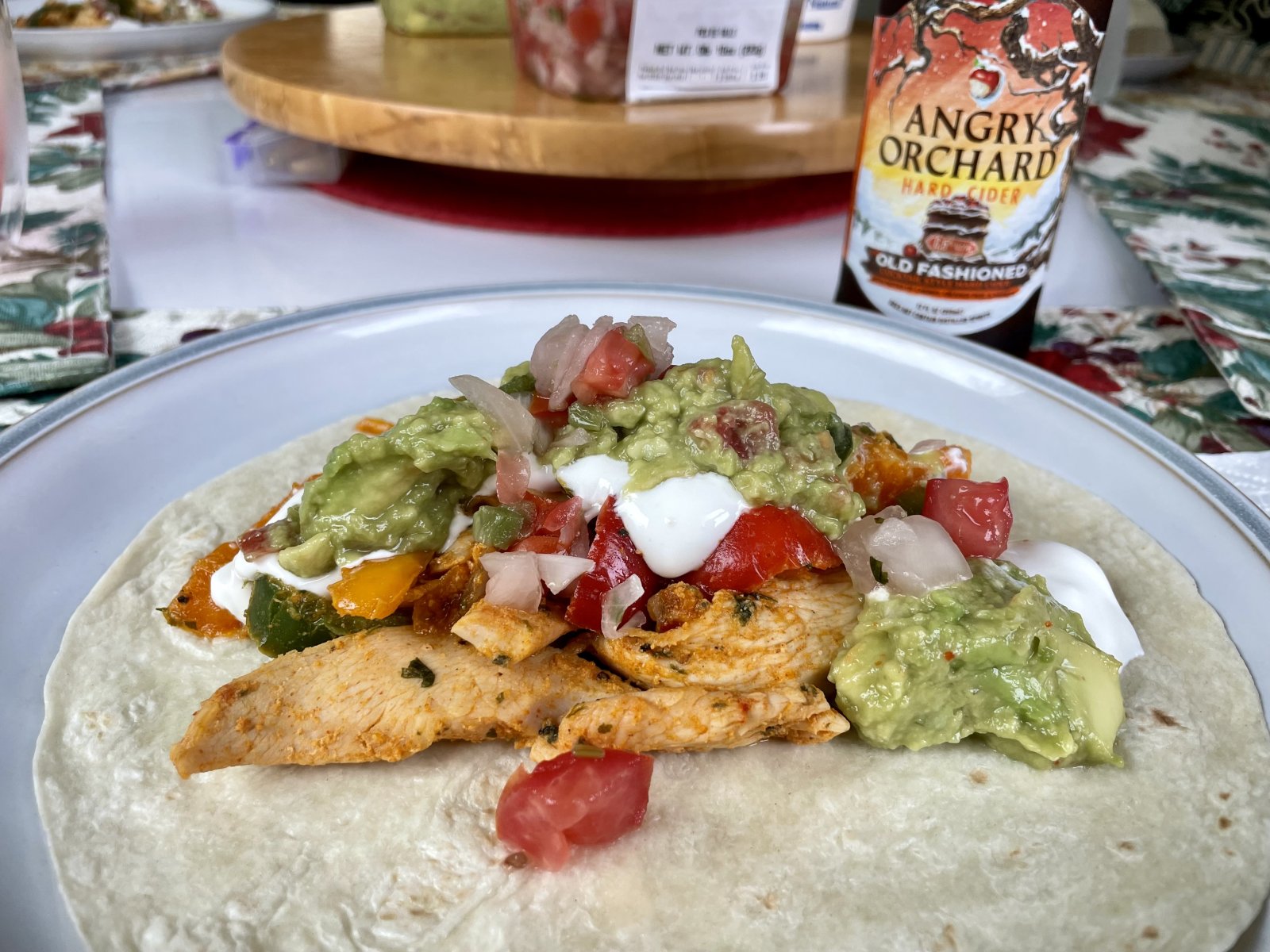 A year or so back, we sat down to some BBQ chicken prepared by the boys. I took a bite and exclaimed, "What is this? It can't be chicken. It's much too moist and tender." The Lovely Mrs. Gardner wasn't amused.

It was actually good. No taco seasoning on the meat. I don’t do salt. 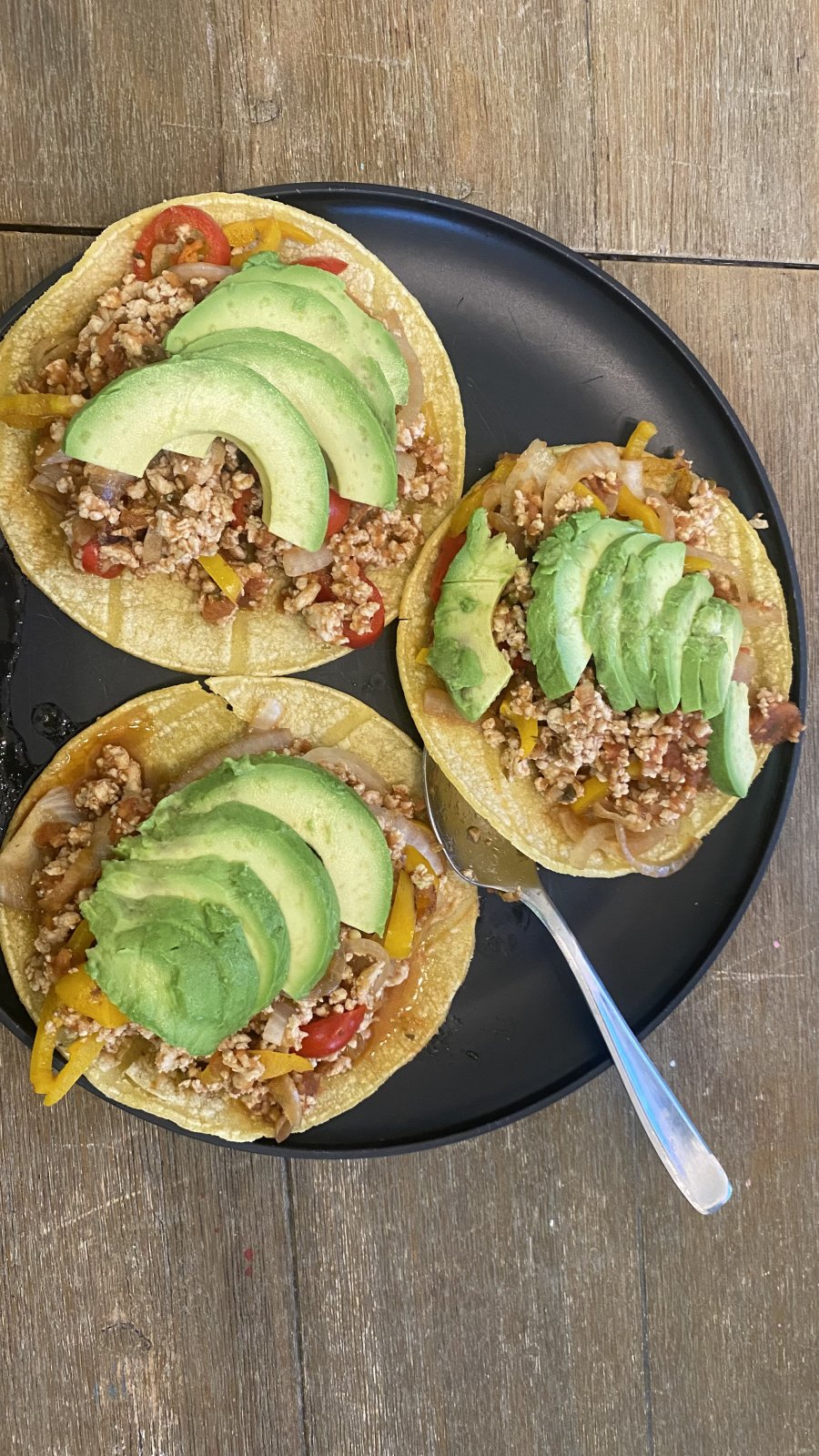 Thursday night I fried some breaded Italian seasoned chicken breasts. So last night, I cut a couple of them up to be placed on some salad.

I bought a bag of chopped mixed greens (a variety of lettuces, and cabbage) to which I added some sliced cucumber, and goat cheese. I also pickled some red onion, in red wine vinegar, water, and grenadine. My daughter added: canned mango, and canned tangerine pieces. That really set it off!

I used blue cheese dressing, and she used red wine and vinegar dressing. I'd say that neither of us went wrong. 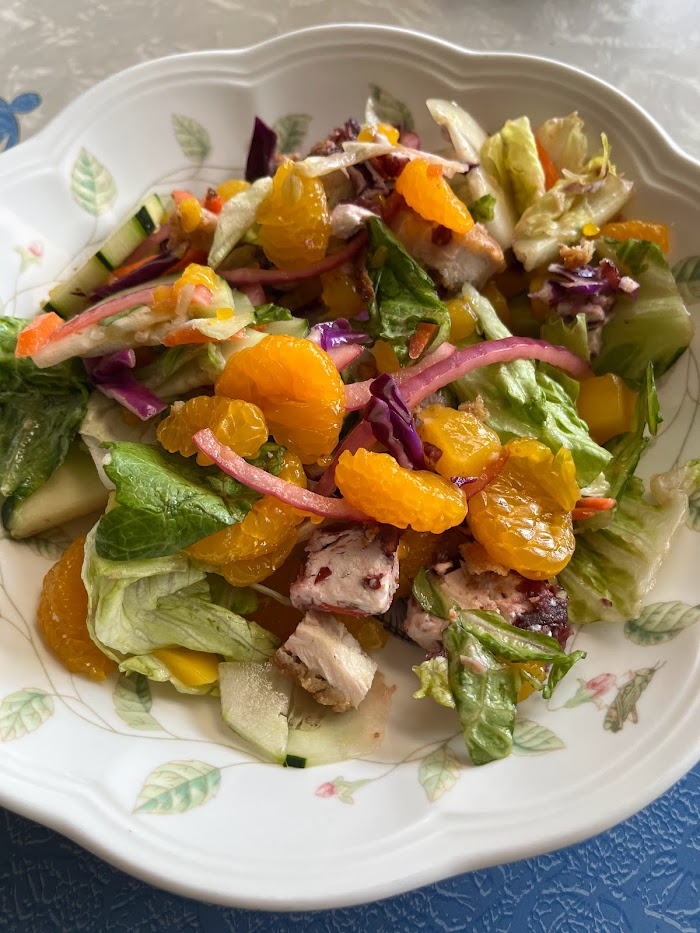 My grandson wanted to try something a little different tonight, so Sirloin Steak it is!

Oh no! There was none at the supermarket, so we decided on Skirt Steak.
In preparation I cleaned up the grill.
Boy oh boy, those things cook up quick!

Next time I'll go with the slower cook method, or sear them on one side and then the other and let them rest.

Fortunately with such a good cut of meat they are very forgiving.
At any rate, grilled with salt and pepper, and then slathered in garlic butter...

served with green and orange, looks good, and tastes better. 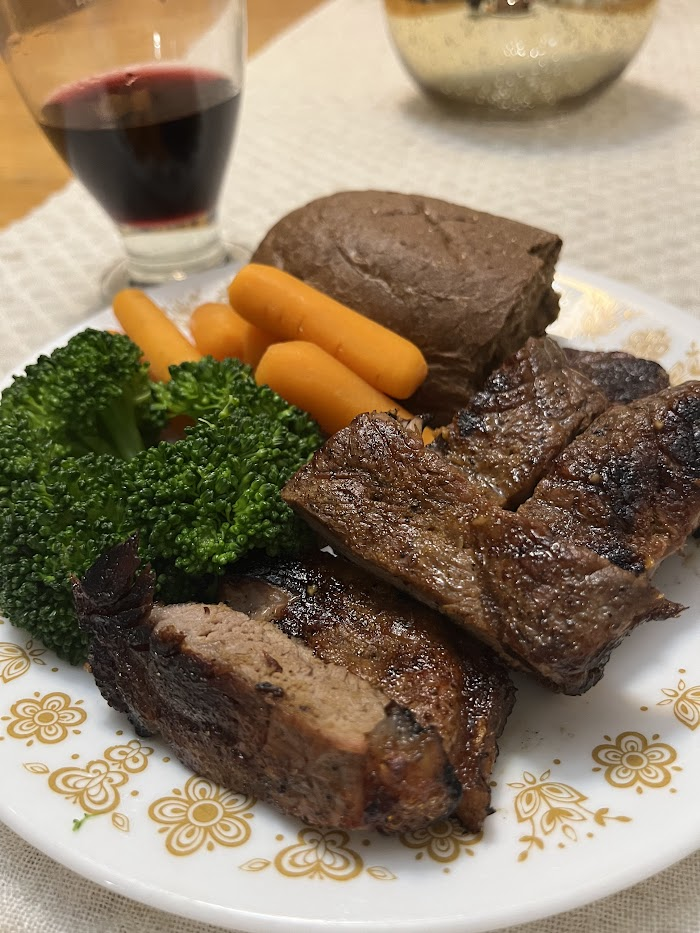 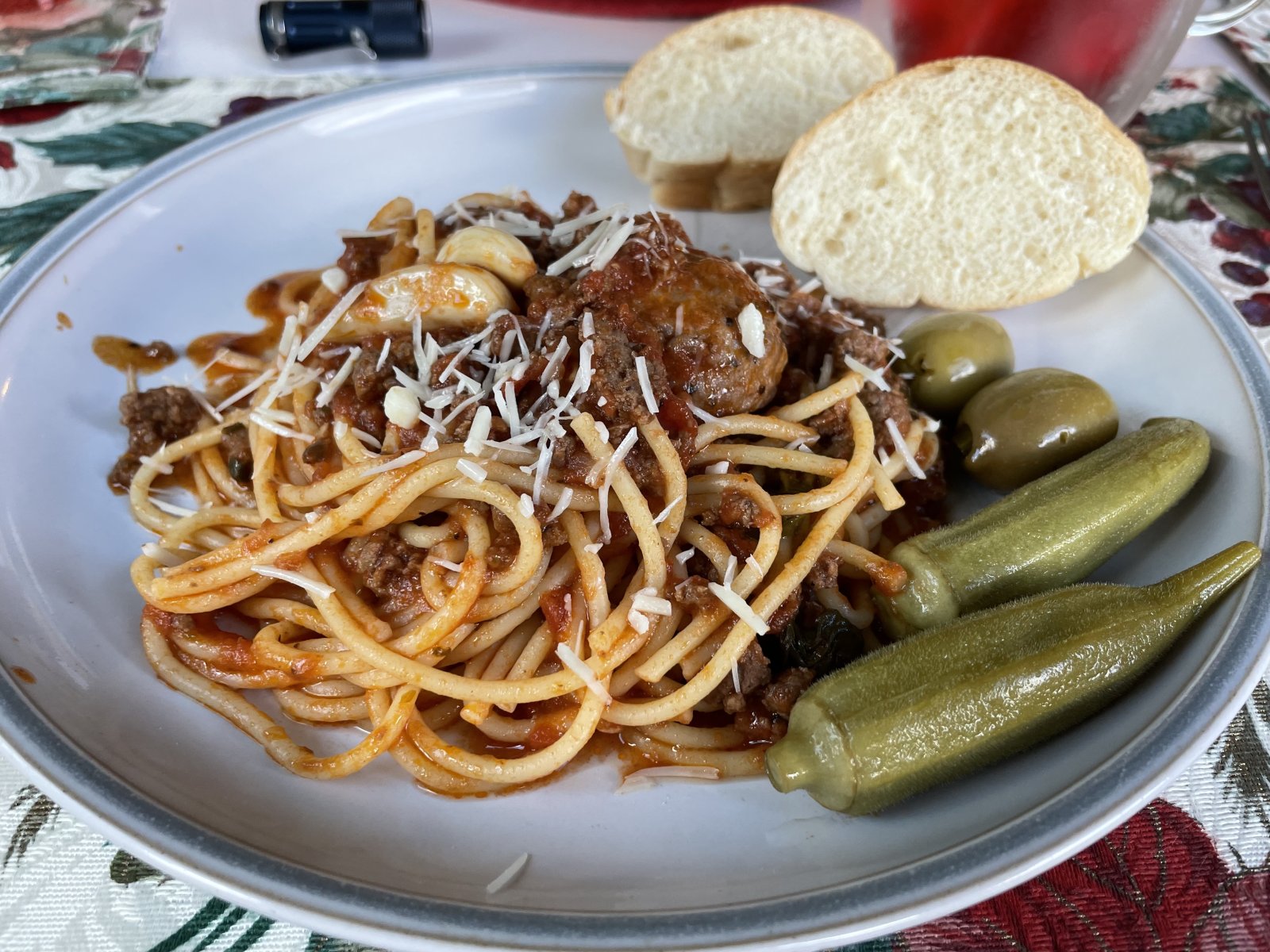 Poppy said:
Next time I'll go with the slower cook method, or sear them on one side and then the other and let them rest.
Click to expand...

Skirt steak is big in my Tex mex area.
It’s best rare or medium rare seared on a high heat for just a min or two on each side then sliced in thin strips across the grain.

My personal fav are those finger cuts of top sirloin, cook like the skirts hot and fast

Had two firsts today food-wise.
A fish house I eat at from time to time was closed so my coworker and I went to a Greek joint. I had a lamb gyro (pronounced yur-oh) which is thin sliced lamb grilled in a greek spice of some kind and wrapped in p¡ta bread. It was huge and served with delicious french fries. I opted out of the tomatoes, red onion and a sauce that starts with "T" that I couldn't pronounce with a loaded, cocked gun to my head. My coworker opted for the loaded salmon gyro.

For supper I had a nice, fresh caught slab of salmon in the fridge at home so I chose to pass on the salmon at lunch.

Now normally I'd grill the salmon on a charcoal grill and drown it in a lemon butter sauce, but I didn't want to fire up the grill and did not have any lemon juice. So I pulled out my favorite heavy guage alluminum fry pan and some olive oil. Part of the slab was thick, part was thin. So I cooked it with medium heat to have the thin part well done as Mrs Fixer prefers and the thick part cooked medium. A bit of ground sea salt and black pepper combined with the extra virgin olive oil made a mighty tastey meal. A side of white rice drowned in smart balance butter spread and mm mm good.

First cook on our new skillet. 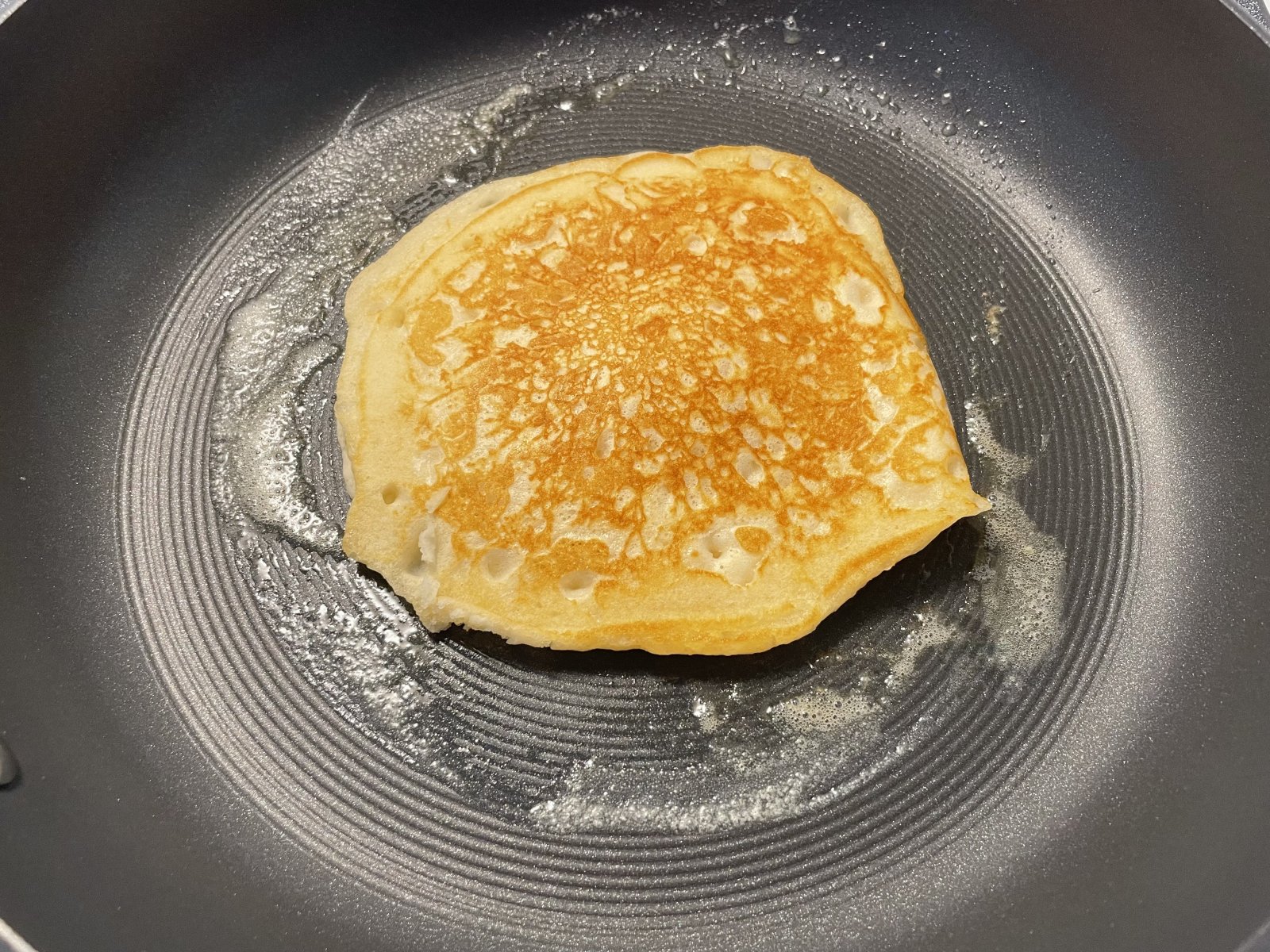 It's a non-stick, but I still use a little butter. 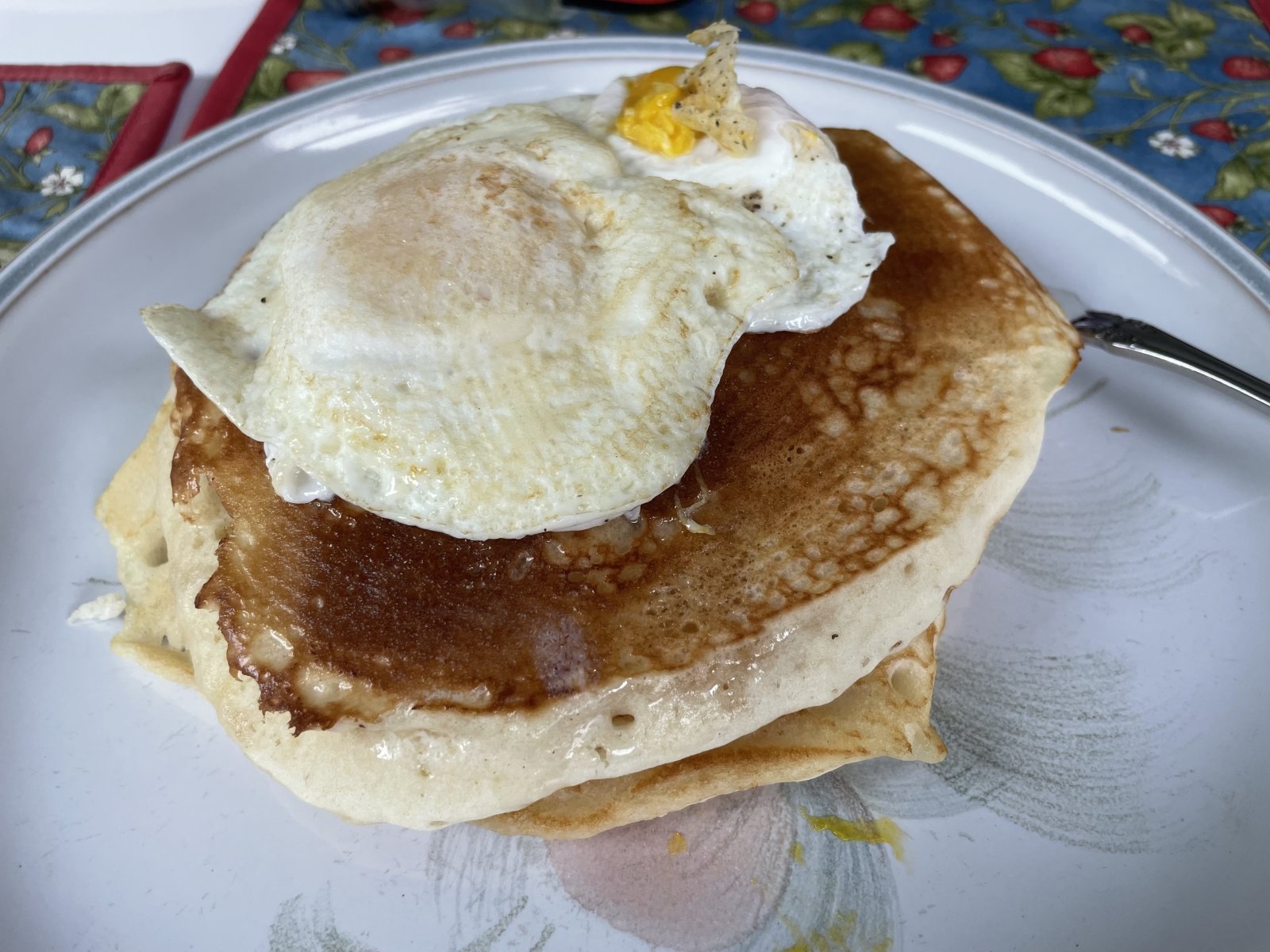 Walmarts pasta sauce is good for the price. Still don't eat meat due to both its cost and the sadness I get when I eat it 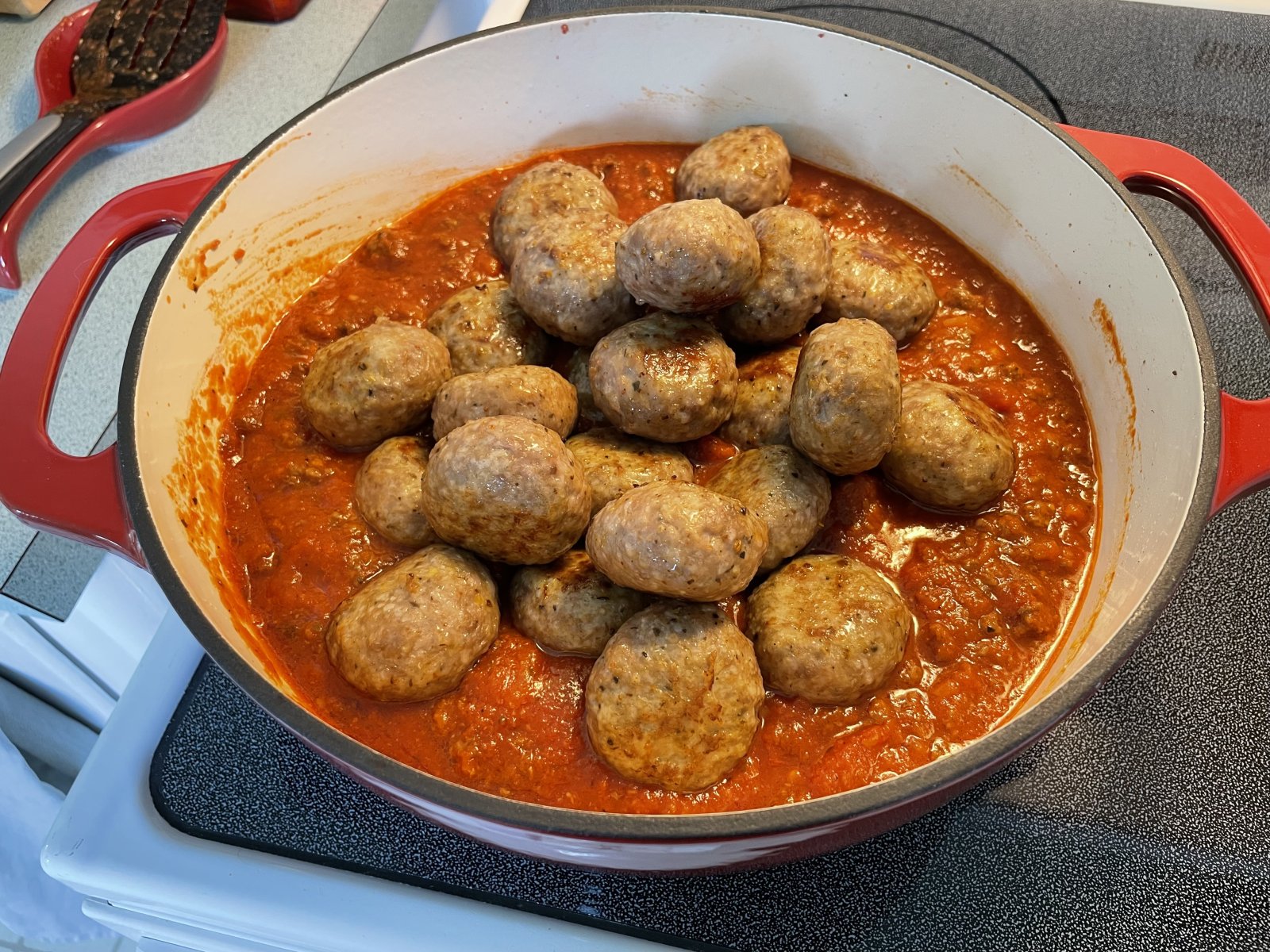 Two pounds of 93% ground beef
Three jars of Newman's Own Garlic pasta sauce - Thanks much for the tip, raggie33!
24 meatballs

It's starts with merinading pieces of chicken in the freezer. I stir 2 tablespoons of McCormick seasoning salt into a coffee cup of water, then place the pieces of chicken to marinate into a sandwich sized ziploc bag and add the 12oz of sauce. Add another 6 or so ounces of water to the bag, push down on the bag until the sauce comes out of the top, ie get all air out. 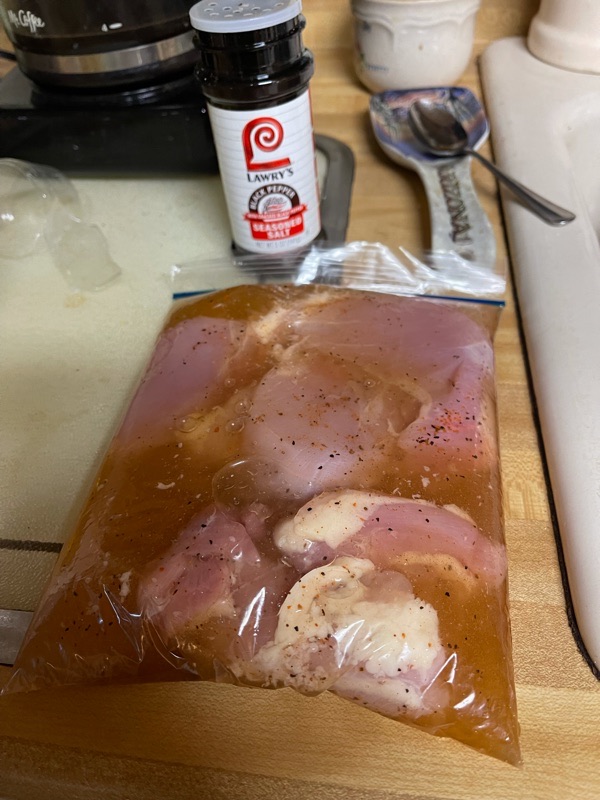 Once that's done slosh it around gentley and lay it out flat. Let is rest a bit then flip it over.

Place flattened bag into a freezer until ready to cook it. 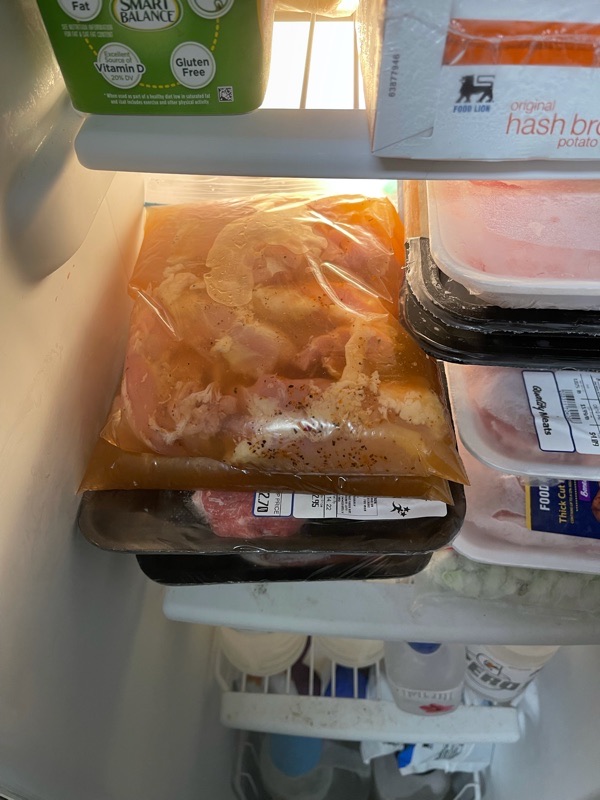 Note how flat it is so you can stack other stuff after it is frozen.

Note what is in the photos above are boneless thighs for frying later. Tonight I had thin sliced breast meat that had marinated for a couple of weeks.

Time to cook it. Stuck it in the fridge for 24 hours. It was thawed the next day.

Take out 12" skillet a bottle of olive oil, some frozen brocolli pieces and drain the bag of chicken. Cut chicken pieces into half dollar sized pieces (about 25mm).

Pour enough olive oil to cover the bottom of the skillet. Add brocolli and chicken pieces. Cook on about 7 out of 10 on a gas stove, which is about 300 degrees. Maybe 325? Anyway it doesn't burn the olive oil but cooks it into the brocolli. Toss it around every few minutes for about 20 minutes. Sprinkle some from cracked black peppercorn and enjoy. 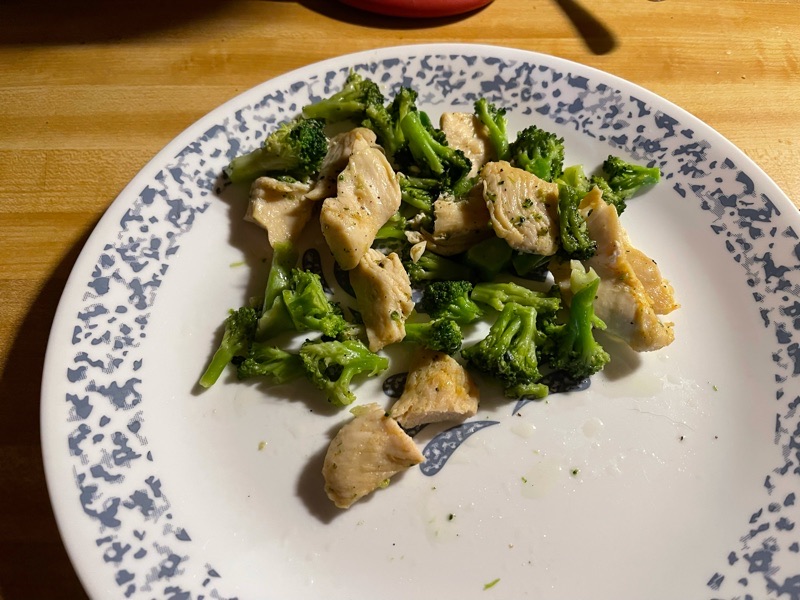 This was after I had eaten half.

I like it plain like that because the olive oil and brocolli combined to have a nice nutty flavor that other flavors added would mask.

Well Mr. Fixer, you've convinced me to do some marinating.

This morning I pulled a baggie of a chicken breast, out of the freezer, that I fileted and beat with a hammer. It was VERY frozen this morning, so I left it set out for an hour or so, and I put it into the refrigerator. When I got home, from the office, it was still frozen so I nuked it for a minute or two.

I added some sweetened Lime juice, and let it sit for about an hour. In the meantime I added some celantro, ginger, and salt and ground pepper to two HEAPING tablespoons of all purpose flour.

I put about 16 oz of water into a pressure cooker, and added more than a pound of frozen broccoli, carrots, and cauliflower. When it came up to pressure, I turned off the flame, and a couple of minutes later, released the pressure. I added half a stick of butter.

Back to the chicken. I poured out the lime juice, and added the seasoned flour. Gave the one gallon baggie a good shake to coat the chicken. Then fried it in olive oil for about 5 minutes. Chicken at 165F.

This was really good! I am going to have to do it again and write down the recipe. 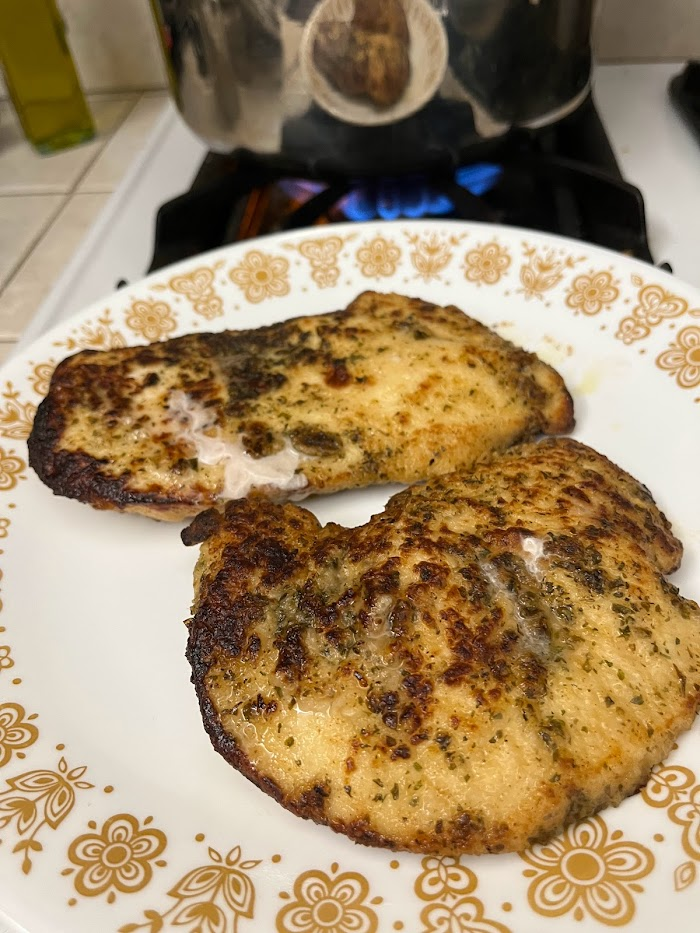 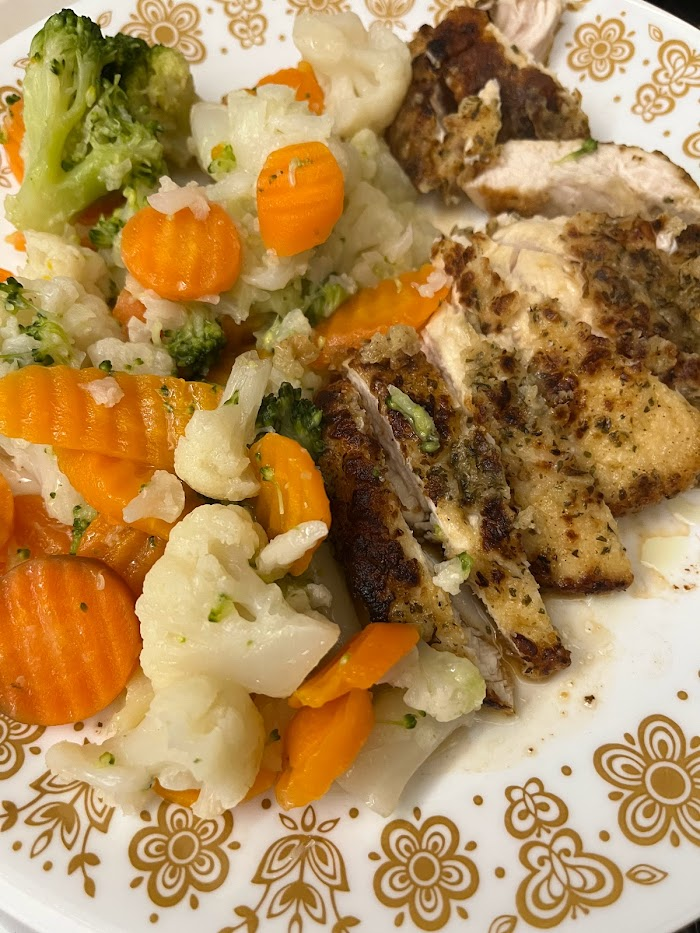 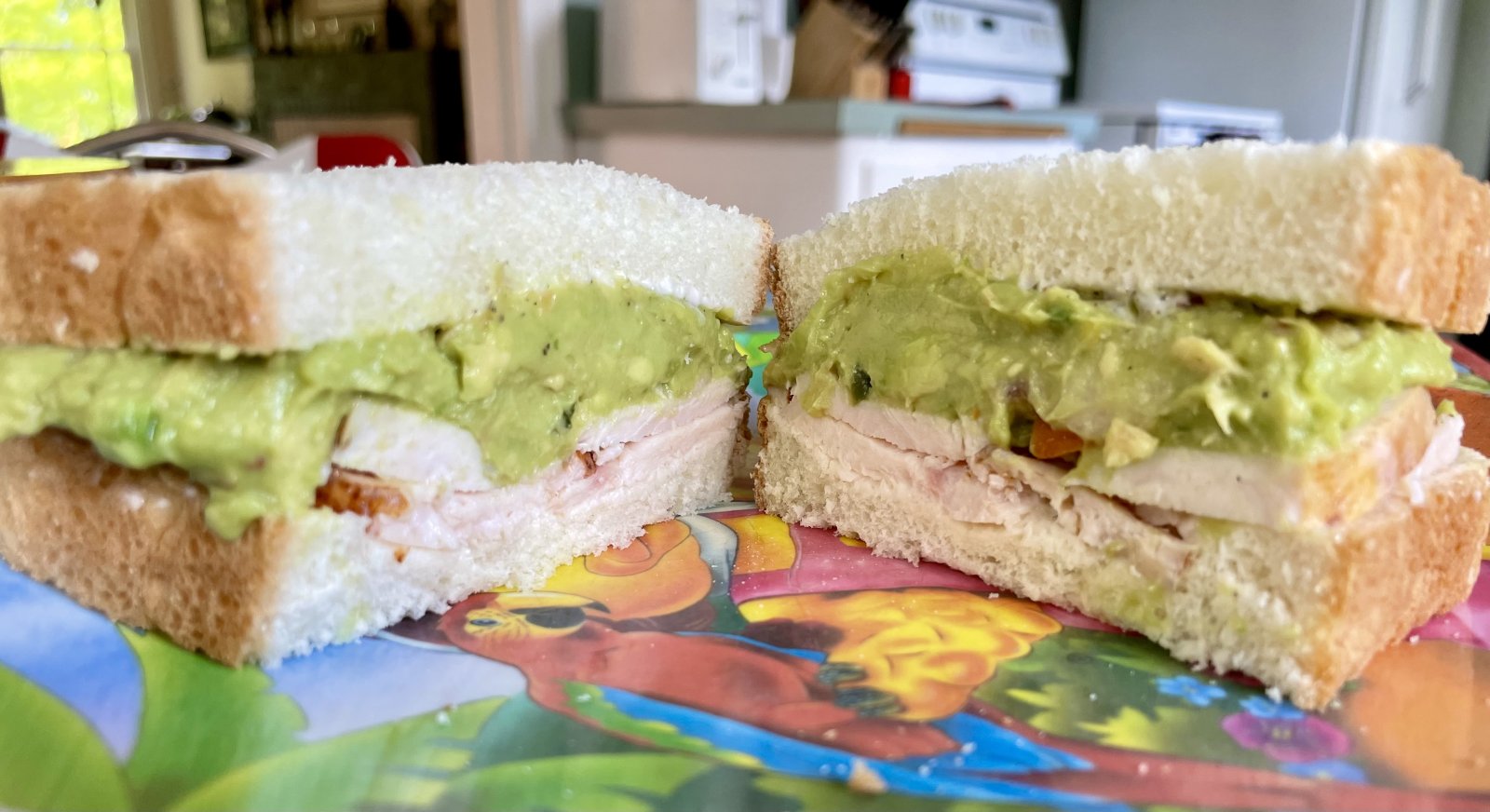