Raggie, If you can eat peanut butter. Next to beans, peanuts are high in protein and building block aminos. Just saying, you don't always need meat. I only buy steer or pork when on sale, and then freeze

luckly i had a huge jar of peanut butter. i forgot about it wasnt real sure i liked peanut butter its been so long. but it was very yummy. i also have some bologna and i dont know if i ever had it before either lol. i was going to try it but ill wait to i have mustard or mayo

I like to toast bread then the peanut butter melts and top off with fav jelly & sliced bananas. When I worked it gives a power boost right through to quiting time

bykfixer said:
I used to make a lot of stews in the crock pot. Freeze in small containers, thaw when I wanted some and heat in the microwave.
Lots of rice too.
Click to expand...

Yeah, it is hard to cook for just ONE, and it is relatively expensive. But it doesn't cost much more to cook for four. Therefore it really makes a lot of financial sense to cook enough for four, eat one portion, and separate and freeze the other three portions.

For example, $.88 for a pound of pasta when on sale, makes four portions, when one considers, 1/4 pound per person/portion. A $2.50 bottle of sauce is sufficient for a pound of pasta. It can be separated into four sandwich baggies, and frozen, then when a ONE person portion of sauce is needed, one need only defrost ONE package.

One method of savings I employ is buying family packs of chicken on sale, and/or chopped meat, when on sale, and splitting each into smaller more personal sized packages and freezing them.

I'm fortunate that I am at the point in my life where I have acquired everything that I need. I have reduced the rate at which I buy things just because I want. That leaves me additional disposable income. Also I try to fix rather than just replace.

raggie33 said:
luckly i had a huge jar of peanut butter. i forgot about it wasnt real sure i liked peanut butter its been so long. but it was very yummy. i also have some bologna and i dont know if i ever had it before either lol. i was going to try it but ill wait to i have mustard or mayo
Click to expand...

im so afraid to try the bologna lol. as a kid i tried orange marmlade and i still get sick to the stomach if i think about it to long. ewwww it was so bad

Many times my trial and error food sucks. I mean, it's edible and all but bleh, yuck. But this time I was pleased with the outcome. 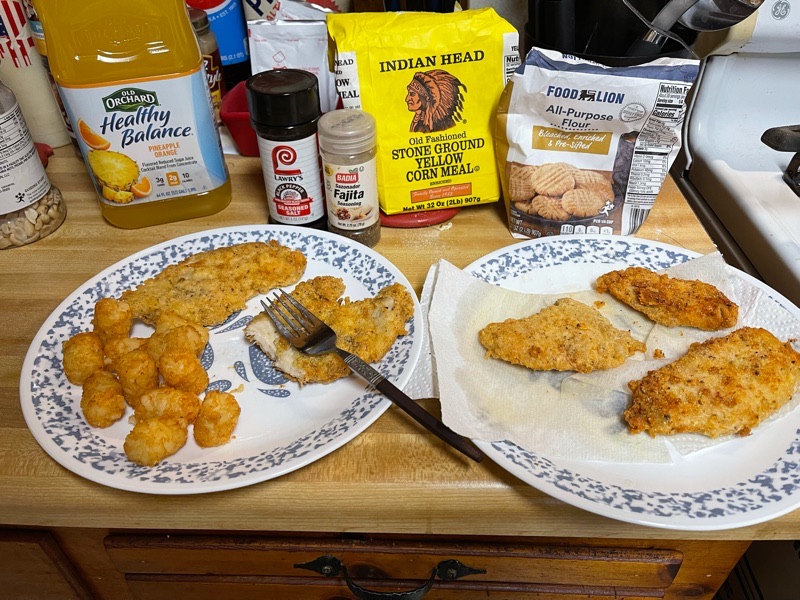 Thin sliced chicken breasts were on clearance at the grocery store so I grabbed a pound. Stuck in a ziplok in a Lawrey's black pepper seasoning salt marinade for a week in the freezer for flavor. Then thaw in the fridge overnight.

Prepare a batter of 60% flour, 40% corn meal, give or take. I added fajita seasoning to the batter. Coat chicken pieces with egg, shake in a sack with the dry batter, place in a frying pan with enough oil to cover the bottom. I heated at 8 of 10 on a gas stove. It took about 7 minutes per side.

For a side dish I deep fried tater tots for about 8 minutes. Now all I had was "vegetable" oil, which is a blend of different oils so the tater tots lacked a great flavor like sunflower, corn or peanut oil would provide. 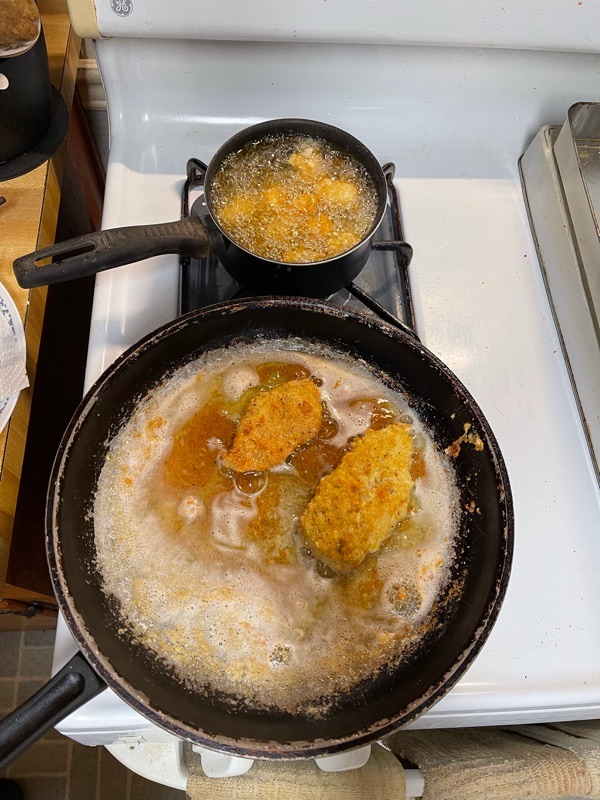 I drank cranberry juice with it. Not bad overall. I liked the marinade, the batter being 60/40 and the fajita seasoning was cool. But next time I'll try corn oil.

Two nights ago we did Chinese take out. I ordered Ginger chicken, or chicken in ginger sauce.

Covid almost put them out of business, and they must have changed hands. Certainly not the same chef.

The meal tasted like boiled chicken with a starch and water sauce, with a little ginger powder mixed in. Blah Blah Blah!!! I ate half of it and put the rest away.

Tonight I pulled it out. Rehydrated the rice, and threw it into a frying pan with some olive oil, butter and a wee bit of water. I then poured off the ginger sauce, and put the chicken, onions, green things, and whatever they had in there, into the pan. I poured over some Teriyaki marinade and cooked it up.

A new concoction: Teriyaki Ginger Chicken. ... As good as it sounds! Tonight was beef stroganof by Hamburger Helper (with ground chicken) for Mrs Fixer and rabbit food for me. I did eat some of the entre' but have some spinach and carrots that have been hanging around several days. Steamer-time.

I believe carrots can last as long as twinkies and moon pies, however I've been munching on sliced carrots a lot lately.

I also had about 1/4 of frozen brocolli so I added that to pan full of spinach and carrots. For consistant tenderness I cooked the carrots 5 minutes, added the brocolli for 8 more minutes, then the spinach for 3. The spinach shrinks to nothing cooked any longer.

Anyway, add a little bit of butter (or buttery spread) to the hot veggies in the serving dish and enjoy low calorie, high nutrition rabbit food. 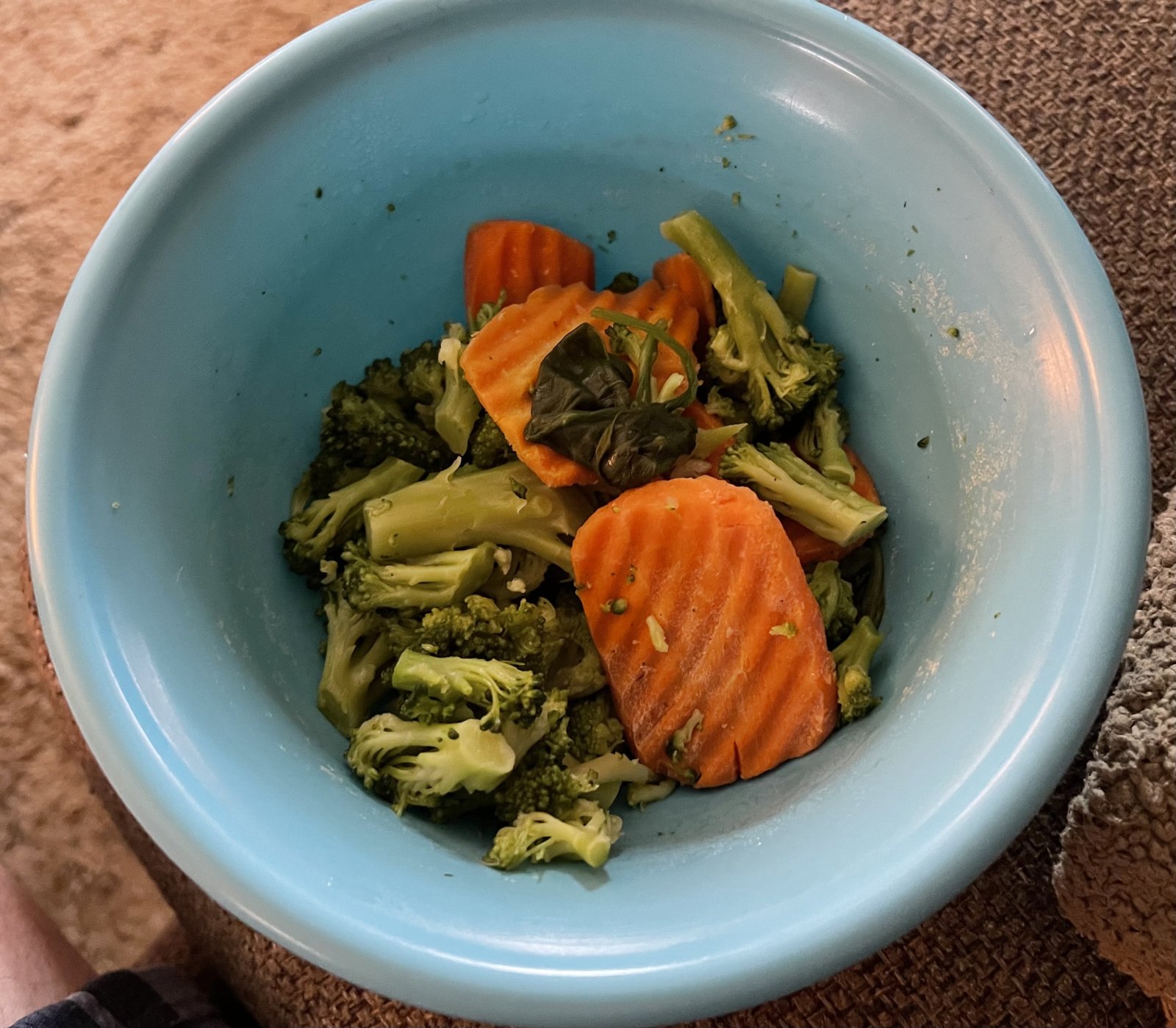 After eating nearly all of it.

I have a couple of big bags of frozen broccoli, carrots and cauliflower in the box freezer. It's a great pairing of veggies, and goes with chicken any way I choose to cook the chicken. I often add onions to whatever I am cooking.

I agree... part of the challenge of cooking is to have everything come off of the stove at the same time. It takes some pre-thought.

I have mad respect for fry cooks at greasey spoon joints like Mels Diner or Waffle House. Getting the hash browns, bacon, pancakes, eggs over easy etc all ready at the same time? Hour after hour?

Last night home alone with the dog, I cooked up some 80-20 ground beef for us. I added cheese to his, but seasoned mine up a bit.

I mixed in some Montreal Steak seasoning, and diced onion. I wiped some olive oil onto my pan to prevent sticking. Then I fried both patties up. When finished, I applied some Sweet Baby Ray's BBQ sauce on mine, and then covered both with some three cheese mexican shredded cheese.

I added some diced onion to a can of beans, and a tablespoon of Sweet Baby Ray's.

Gotta love me some blue cheese, 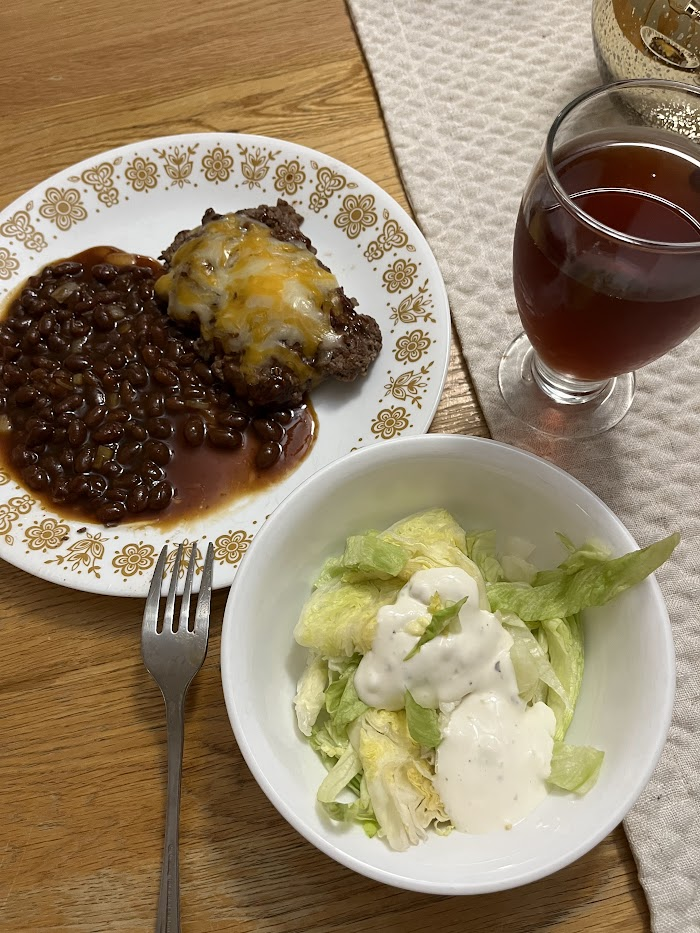 bykfixer said:
I have mad respect for fry cooks at greasey spoon joints like Mels Diner or Waffle House. Getting the hash browns, bacon, pancakes, eggs over easy etc all ready at the same time? Hour after hour?
Click to expand...

If you've ever watched those cooks work, they use long spatulas and move like master brick layers

You know who are fun to watch? Those Samurai chefs who cook at your table.

Our little dog is getting tired of eating his kibbles.

Last night, I made some Southern fried chicken: a chicken breast filetted, pounded, dipped in seasoned flour and fried in olive oil.

I cut up the larger piece for him, and added some water to the pan to make a little chicken stock, which I poured over his kibbles.

When he was done, I think he had a smile on his face! 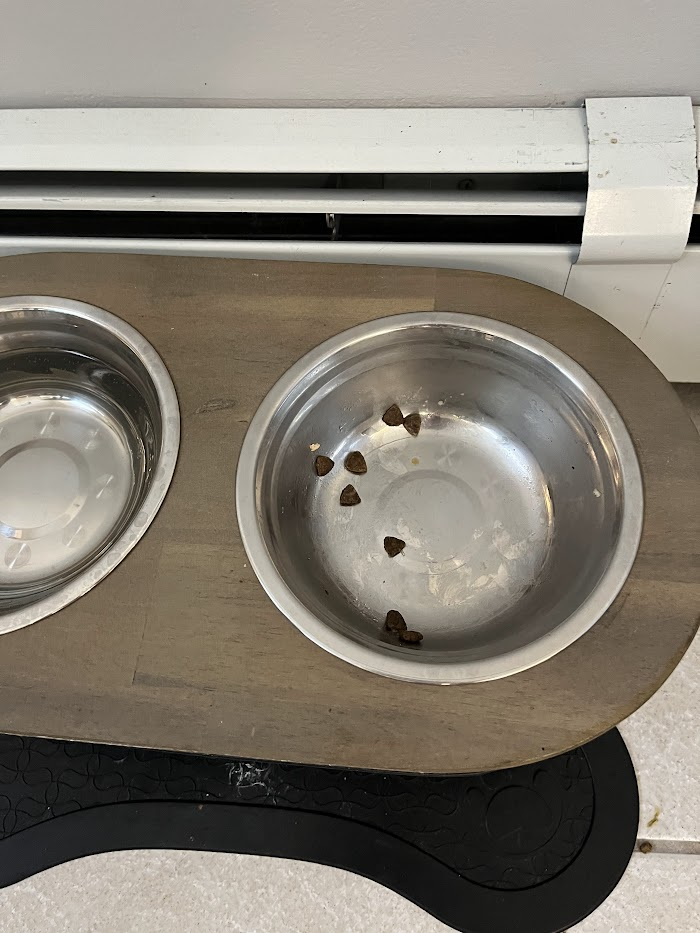 i dont do pics my food is ugly lol . tonight i ground my own beef for a hamburger it was amazeing

raggie33 said:
i dont do pics my food is ugly lol . tonight i ground my own beef for a hamburger it was amazeing
Click to expand...


What did you use for your beef? 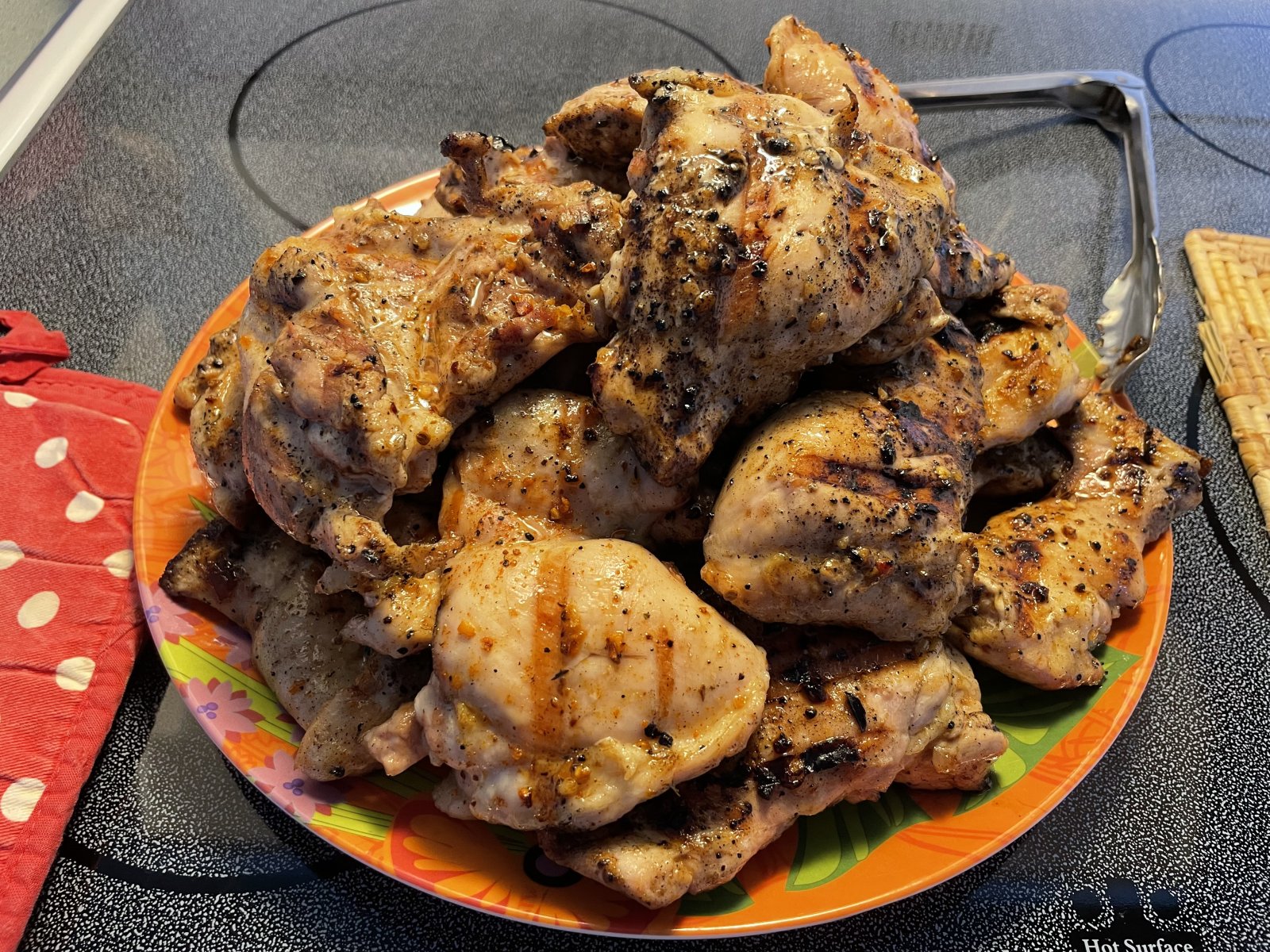 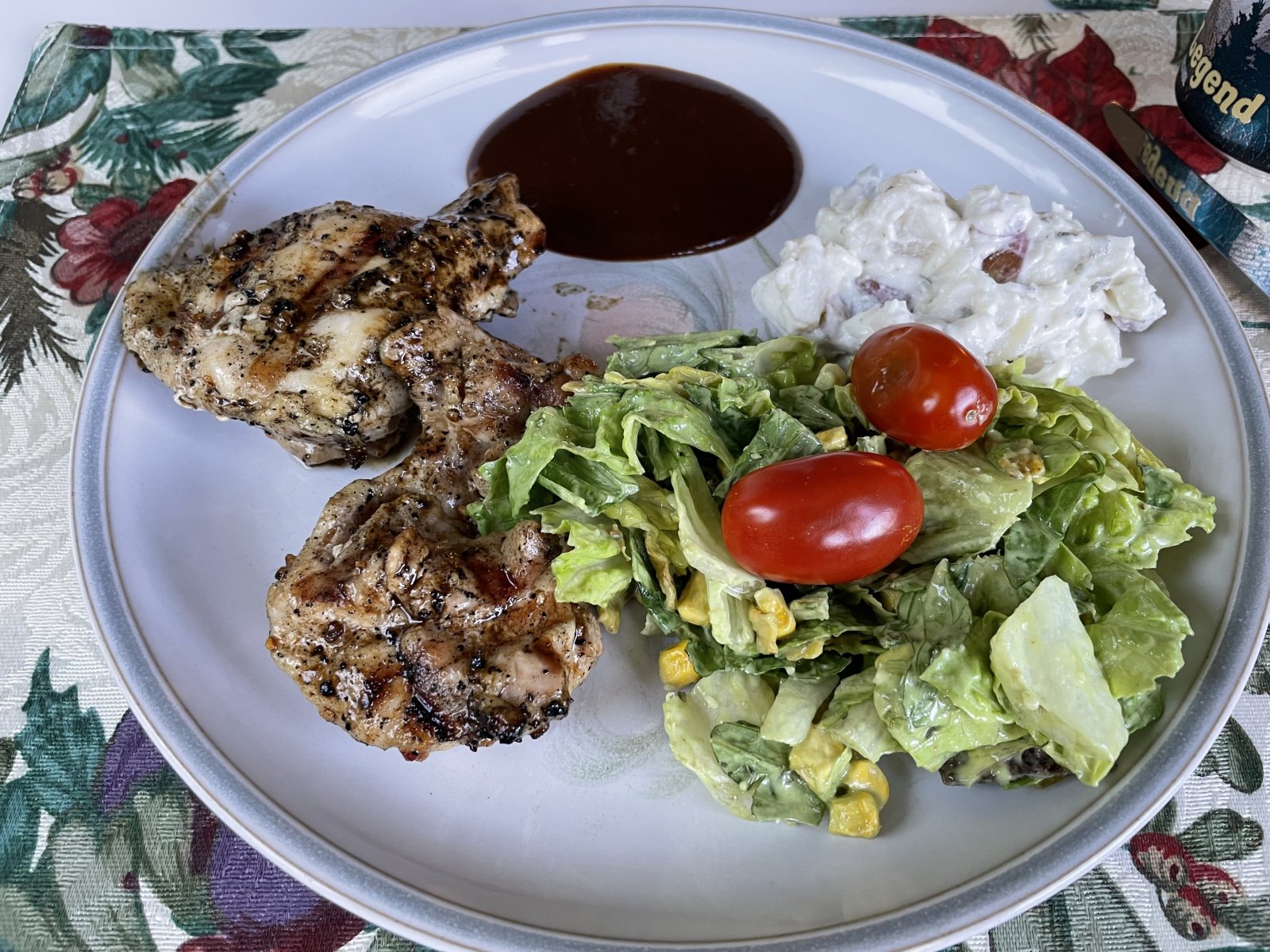 Chauncey Gardiner said:
What did you use for your beef?
Click to expand...

some cheap beef from the local mexican market. made sure not to waste the fat distrubted fat thru burger , best burger i have had
P

Poppy said:
Yeah, it is hard to cook for just ONE, and it is relatively expensive. But it doesn't cost much more to cook for four. Therefore it really makes a lot of financial sense to cook enough for four, eat one portion, and separate and freeze the other three portions.
Click to expand...

For the past 40yrs+, that's the way I've cooked most meals. The first time around, it's a 4-6 people ... but, just me and perhaps a guest. The rest gets stored in small, airtight, 1-2 serving containers in the freezer. Easy to pop one into a casserole dish or microwave, heat it up, reconfigure some of the spices/herbs ... and, voila!, a new dish. Often, at least with many foods, the flavors have melded since the first cooking and it can taste better.

I do my own spice blends, from the corns/seeds. I do my own soups. I make most dishes from scratch, other than pre-made noodles or pre-made bread (which is a rare item for me). Much prefer fresh produce, natural foods, unprocessed and unpacked foods, then putting it together myself. In the end, costs quite a bit less, eliminates most of the salt and preservatives/chemicals that processed packaged foods typically have, and it's simple enough to skew the flavor profile to however I prefer it.

A few times annually, I create a bone broth from scratch. Spiced and herbed a bit, then stored into small-ish freezer containers. Healthy and rich, and it can easily be added to a range of dishes for added savory flavor and "zip."
You must log in or register to reply here.
Share:
Facebook Twitter Reddit Pinterest Tumblr WhatsApp Email Share Link