Wow, cranberry jelly in August? At my house that would be like fruit cake in June.

I have a small stockpile of chicken products I'm saving for cooler weather. Prices recently have been through the roof. I'm all over that rice-a-roni. Mmmmmm

I had seedless red grapes for the night time snack. At 34 calories per 10 with lots of stuff thst's way better for people than a snickers bar. I ate about 20. They have lots of water too.

bykfixer said:
Wow, cranberry jelly in August? At my house that would be like fruit cake in June.

I have a small stockpile of chicken products I'm saving for cooler weather. Prices recently have been through the roof. I'm all over that rice-a-roni. Mmmmmm
Click to expand...

LOL... yeah, isn't it funny that we hardly ever eat certain foods, but always have them during certain holidays?

IDK when was the last time I had baby onions in cream sauce, or brussel sprouts either broiled, or in cheese sauce (yet I love them either way!). I was thinking apple sauce would go great with the chicken, but didn't find any in the pantry, but I spied with my little eye, three cans of cranberry sauce. They were probably there since Thanksgiving.

bykfixer said:
I have a small stockpile of chicken products I'm saving for cooler weather. Prices recently have been through the roof.
Click to expand...

Yes, I agree. There are two competing supermarkets near enough to each other I can go to either. I check their online flyer to see which has chicken for less. I can usually get boneless breasts for $2.99 a lb if I buy the family pack, at one place or the other. The family pack has been about 5 lbs. A few days ago, the family pack was only 3lbs. So I bought two of them. I find it interesting that they have downsized them too!

Chicken prices when not on sale however can be upwards of $3.99 and even up to $5.49! Yesterday I bought a dozen eggs for $3.99. I went to that store because eggs are usually a little less there, than at the other. I guess there is an egg shortage coming? They certainly had plenty in stock.

We decided to prepare these for last night's family dinner -

Fresh off the grill - 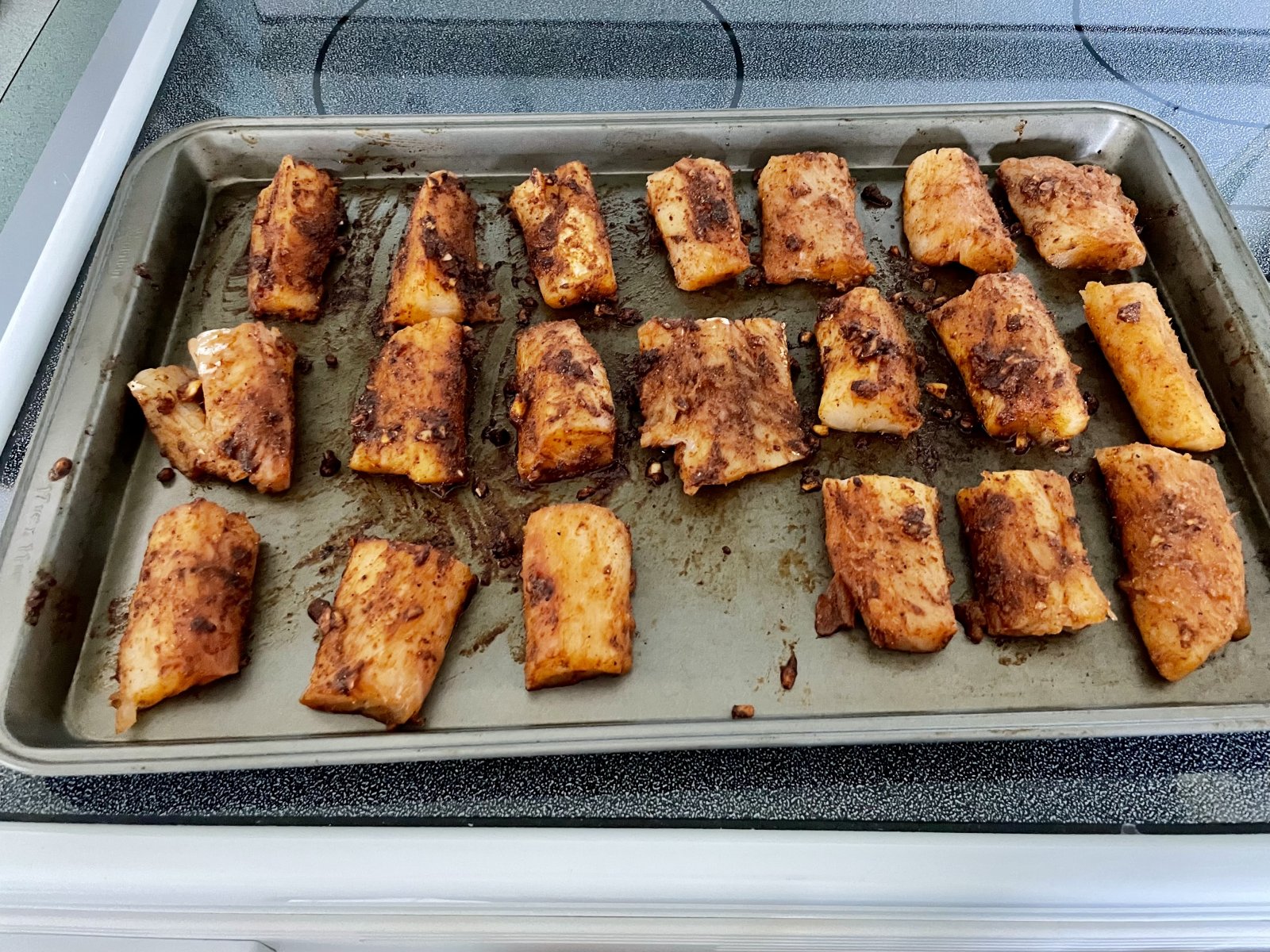 Try them. They were the best fish tacos I've ever had. 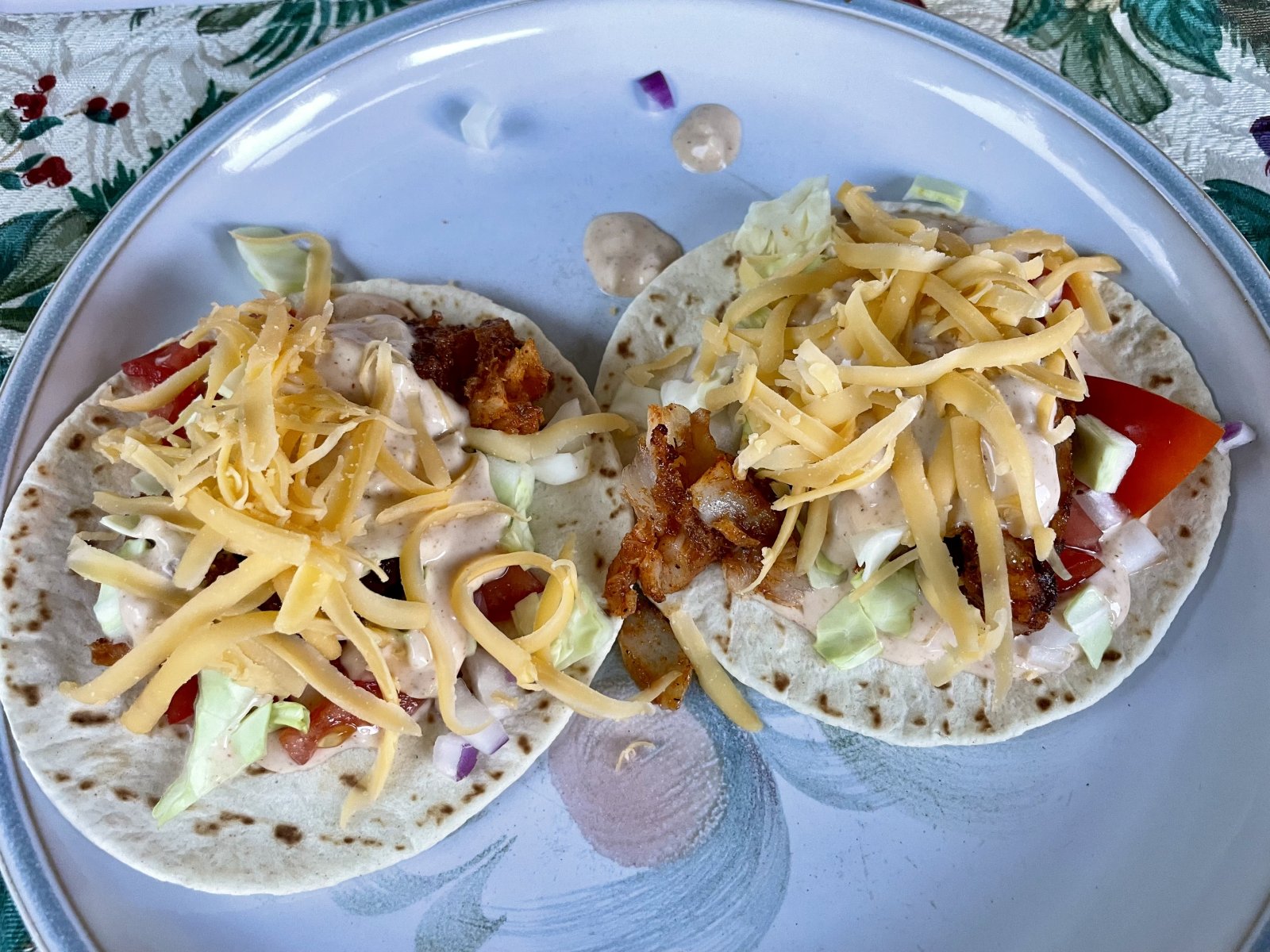 Anybody got any tips on turning bananas into beverages? Any other ways to eat them?
Doc (and friends) say eat bananas. I just don't like bananas. But I'm willing to try them in a smoothie or some other form.

there illegal here since around 2004 due to the invasion

bykfixer said:
Anybody got any tips on turning bananas into beverages? Any other ways to eat them?
Doc (and friends) say eat bananas. I just don't like bananas. But I'm willing to try them in a smoothie or some other form.
Click to expand...

Bananas are more palatable frozen. Be sure to peel first before freezing (-;

Two nights ago we had one of those chicken cutlets each, left over peas and rice a roni, and some sweet potato gnocchi. That was a little different. 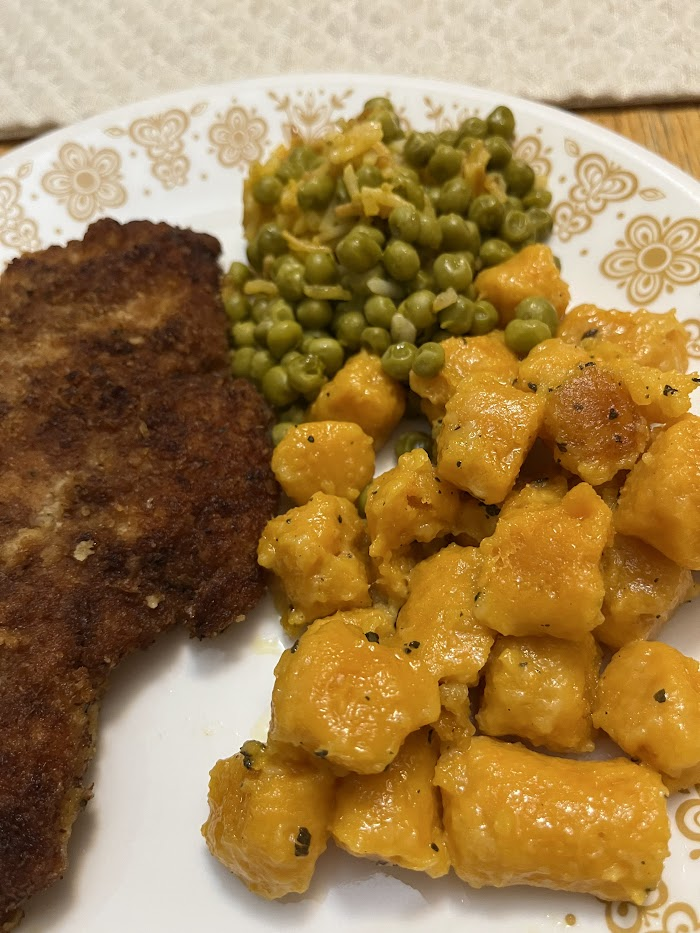 And then last night we had a bag of frozen chicken, pasta, and vegetables, to which we added a cut up chicken cutlet. Without that additional cutlet it would have been more like a bag of mixed veggies. It was sprinkled with grated parm cheese. 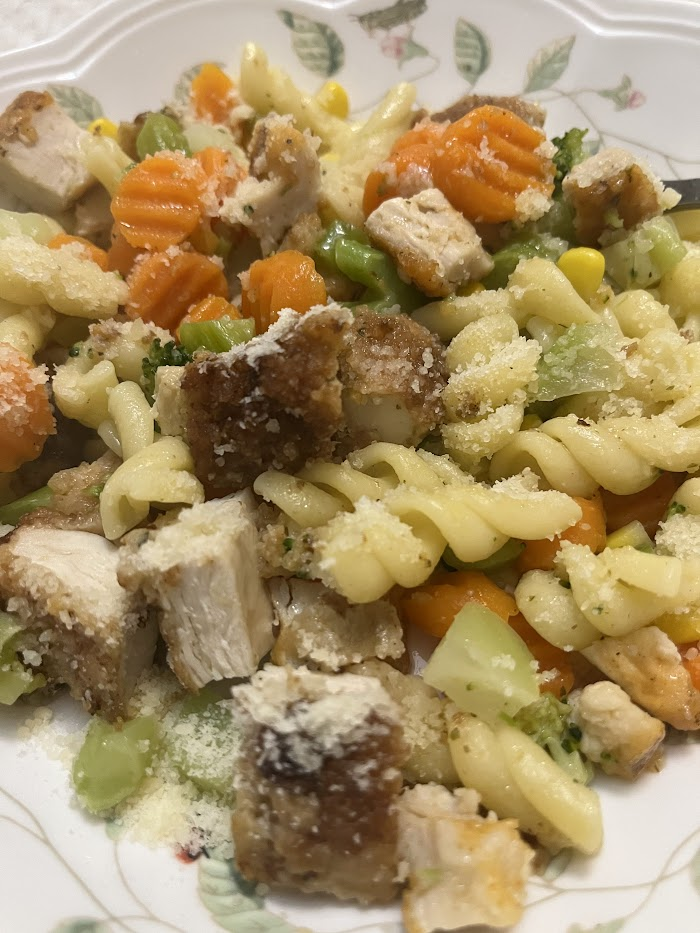 There is one more cutlet left for the dog, so tonight is either take out, or I'll have to start cooking again.

I see that top round for London Broil is still on sale today for $2.99 lb.

They probably only sell it in a package of two, so I'd cook one and freeze the other.

It was tasty. Real simple to make, just grease a pan for easy cleaning, then dump the bag's contents in with 1/2 cup of water. Cover it, and Let it steam up for 12 minutes, and done.

My 87-year experienced mother prepared a Tex-Mex meal for us. The casserole was a little on the wet side, but nonetheless delicious. 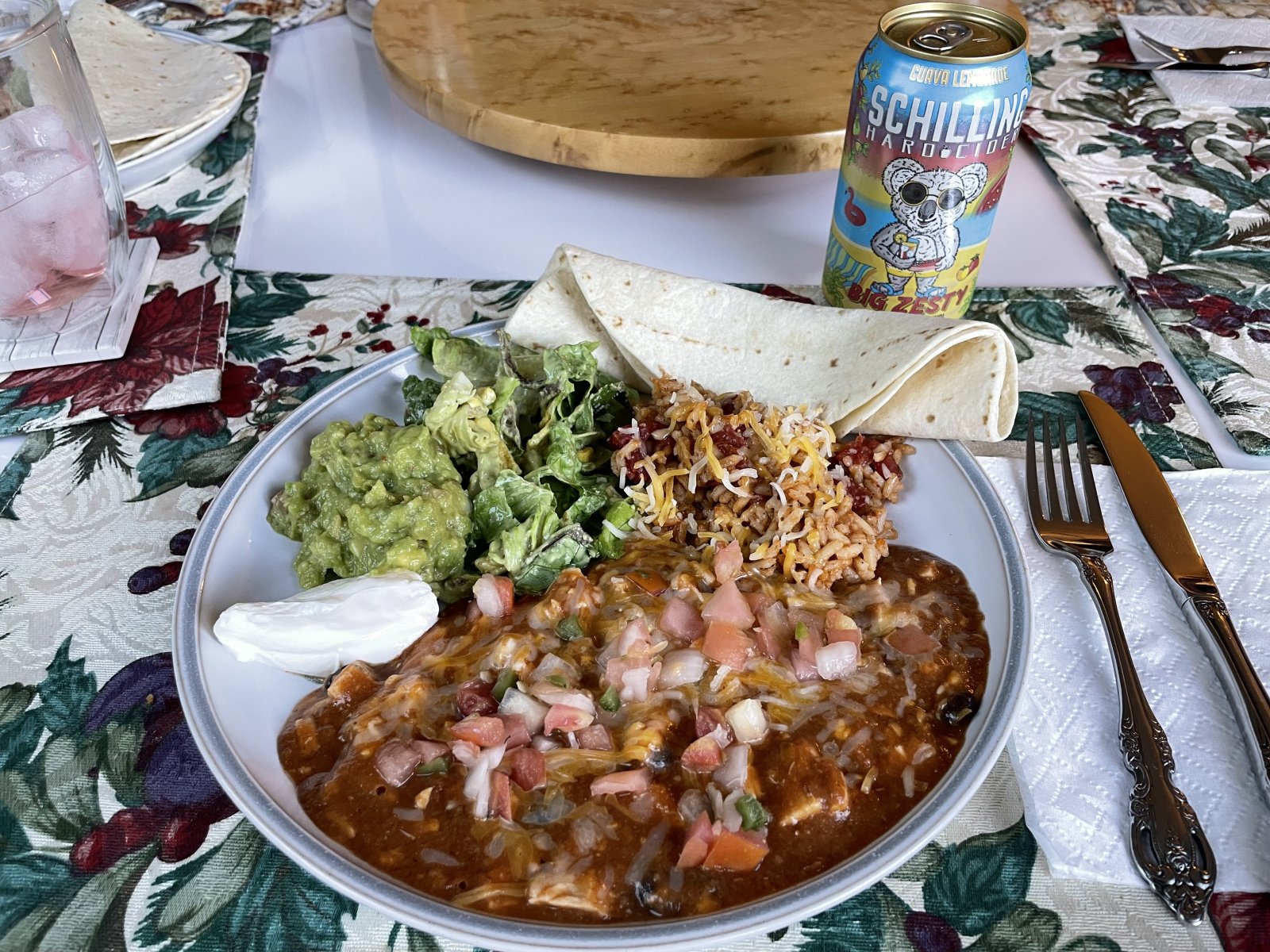 Chauncey Gardiner said:
My 87-year experienced mother prepared a Tex-Mex meal for us. The casserole was a little on the wet side, but nonetheless delicious.

Ah... she puts love and experience into her dishes. God Bless her.

Poppy said:
Ah... she puts love and experience into her dishes. God Bless her.
Click to expand...


Indeed! At 87 years of seasoning you can imagine how meal preparation (and eating) could become somewhat monotonous for a person. Mom had indeed grown weary of both tasks. Then during the COVID years, she and her grandson, my nephew, started joining us for family dinners three or four nights a week. Most of the time our sons man the kitchen. Sometimes my Better 3/4s and I would, and ever so often Granny, would cook. At first it was obvious mom was only doing so to help out, not because she enjoyed cooking. I, who she refers to as her Good Son, being sometimes honest to a fault, mentioned to her that there was something missing from her meals - Love. Then whenever Granny informed me she was going to cook, I'd jokingly remind her to not forget the love.

Poppy, your post made me smile because love has again become the main ingredient in all of Granny's meals.

Chauncey Gardiner said:
Poppy, your post made me smile because love has again become the main ingredient in all of Granny's meals.
Click to expand...

Chance,
Making you smile, made me smile

Somebody told me Wawa has good club sandwiches. They were correct. I had a turkey, ham, bacon, lettuce and mayo with extra meat on whole wheat for about $8. Best dam club sandwich I've ever eaten. 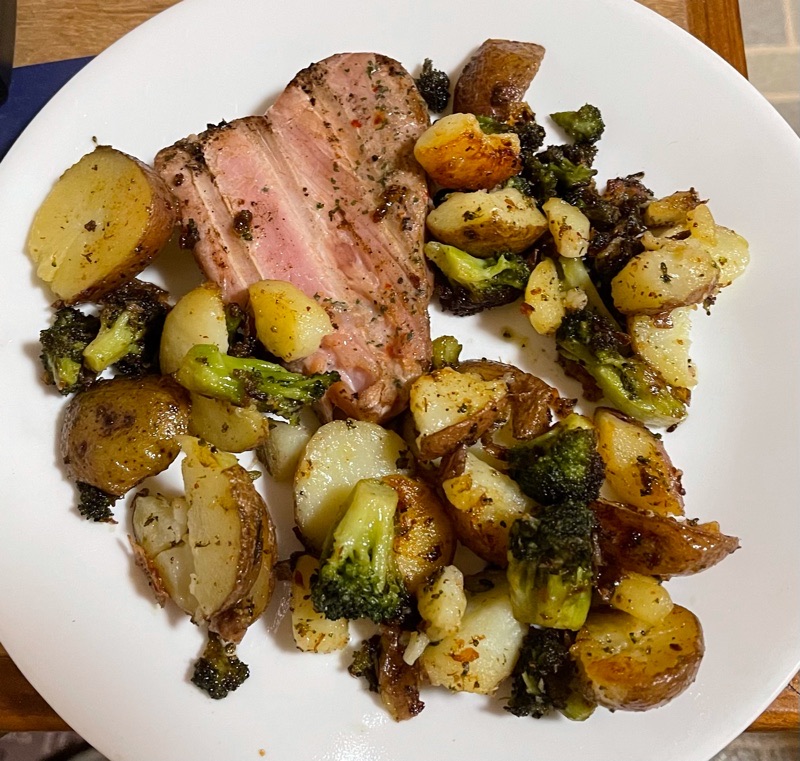 Here's one I am proud of.
Another experiment that turned out awesome. Start out with 2 -5oz tuna steaks marinated in a mixture of Italian dressing and lemon juice. Two days in the Italian dressing then drain that and added three tablespoons of lemon juice on top of them this morning. Taken out of the fridge 15 minutes before cooking on a gas grill at 350 degrees for 5 minutes per side. Corn oil was brushed on the grates as a non stick agent.

6 baby russet potatoes were cooked in the microwave for 4 minutes to soften. In an alluminum skillet (non teflon coated) a 50/50 mixture olive and corn oil was heated to #7 of 10 on a gas stove. Slice potatos, being careful 'cause they're hot. Placed the potatos into the heated oil like fried potatos and onions only instead of onions I used frozen brocoli florets. Once they had thawed I melted a half stick of butter. In about 10 minutes the potatos were really soft, the brocoli soft and butter was sticking to everything.

Mrs Fixer added salt to her potatos and brocoli mixture. To me, the tuna was spicey enough. I don't know that I could duplicate this dinner but I sure am going to try next time I see tuna steaks on sale.

Lunch and dinner post
Lunch was a turkey and ham club from a Wawa gas station on multi-grain bread, hold the tomato. They put just the right amount of mayo on it. A little less than $7 plus a drink. (Fanta orange soda btw) 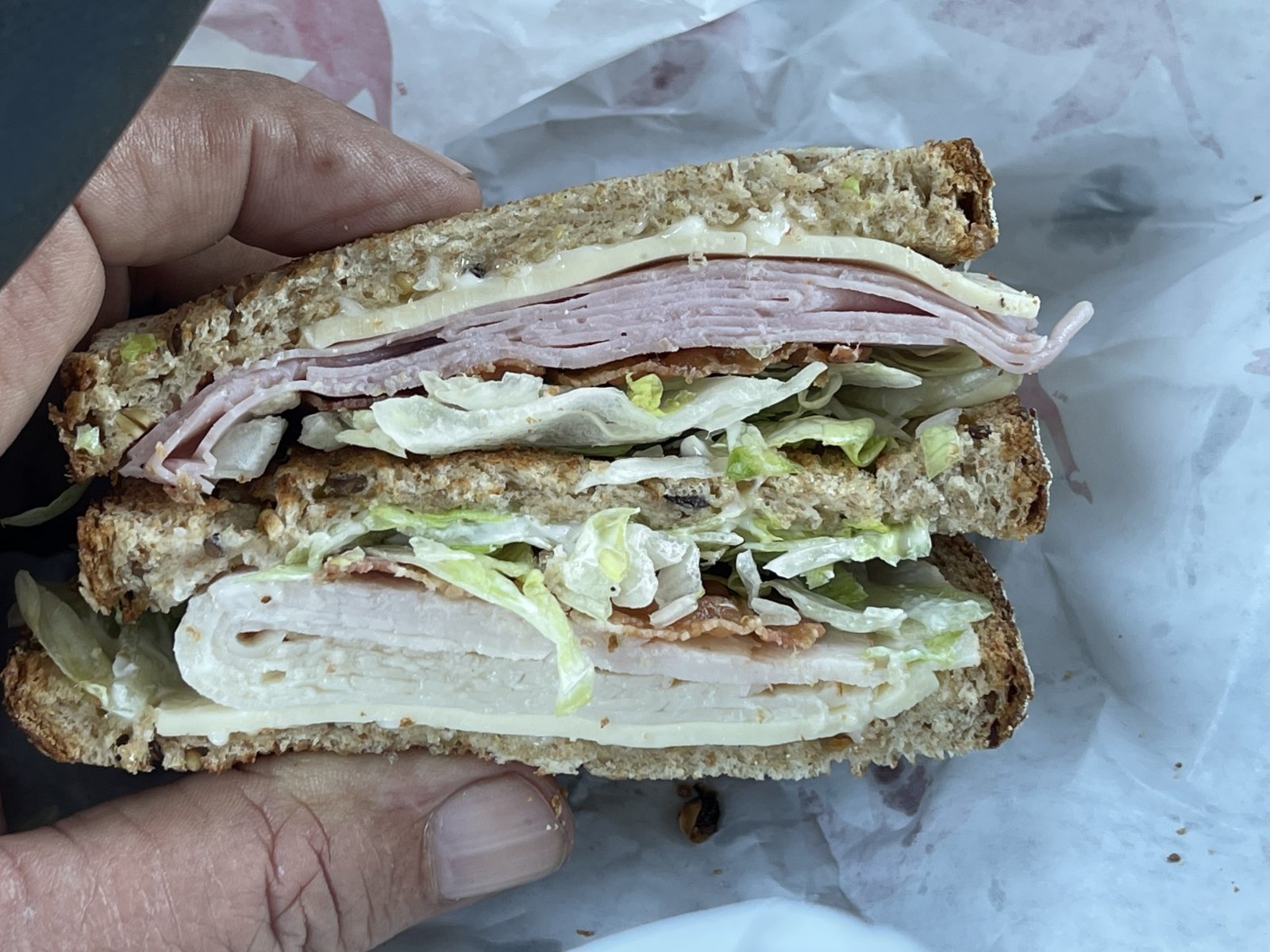 Dinner was fried flounder using a 80/20 mixture of panko bread crumbs and corn meal. A pinch of cracked black peppercorn and a dash of sea salt. Cooked in a skim of corn oil. Peas on the side and spring water to drink with 22 red grapes for dessert. 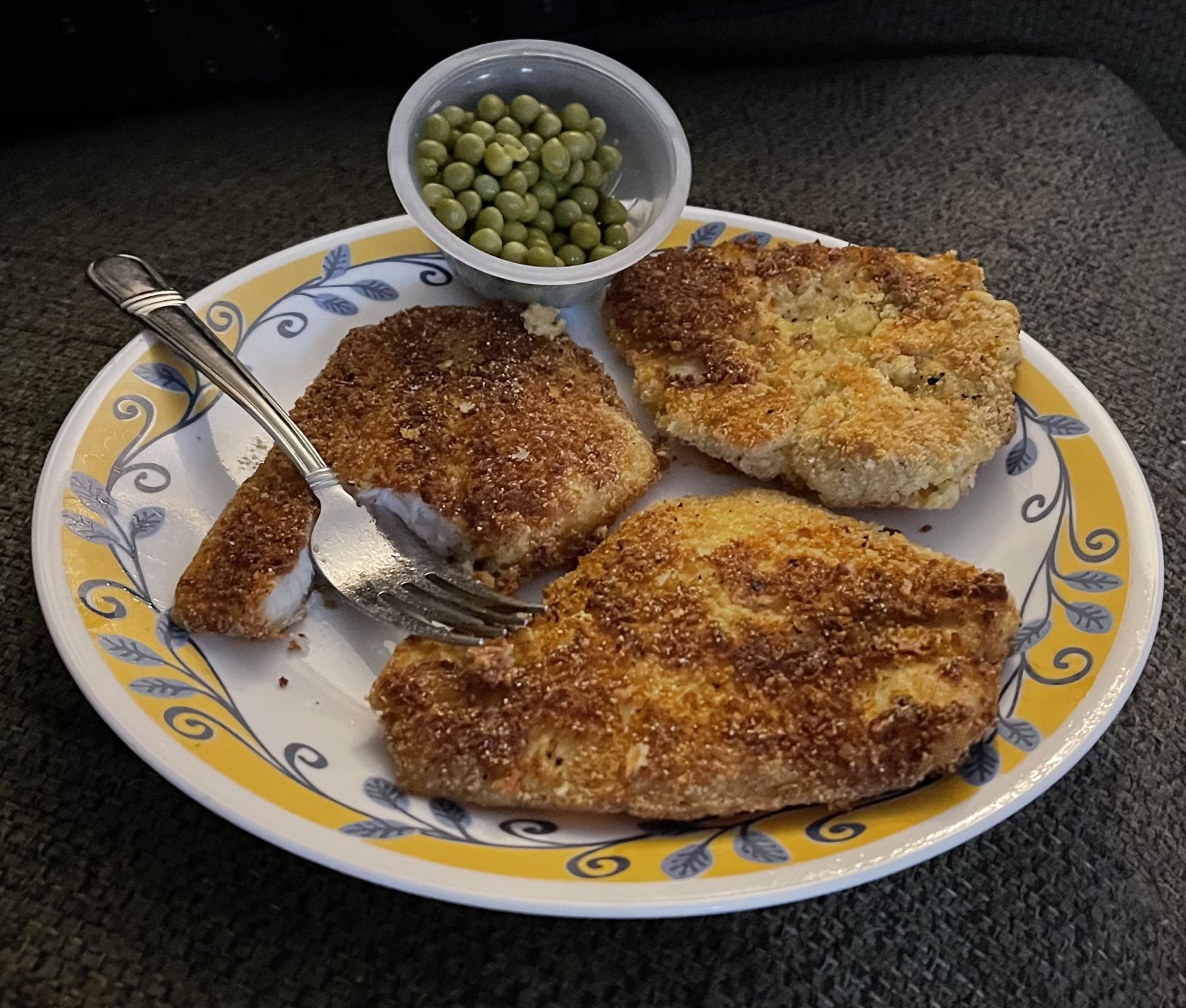 Since June the scale likes me more each time I step on it because it strains a little less each time.