Solid Lifters said:
How is Brown Shugga'? Sounds like it would be too sweet.
Click to expand...

A slightly stronger Hop Stoopid with a red/dark streak, very balanced and polished, something you could drink with your granddad.

StarHalo said:
A slightly stronger Hop Stoopid with a red/dark streak, very balanced and polished, something you could drink with your granddad.
Click to expand...

Pulled Pork Hickory Smoked Sandwich with a side of homemade baked beans. (Much better version of the McRib.) 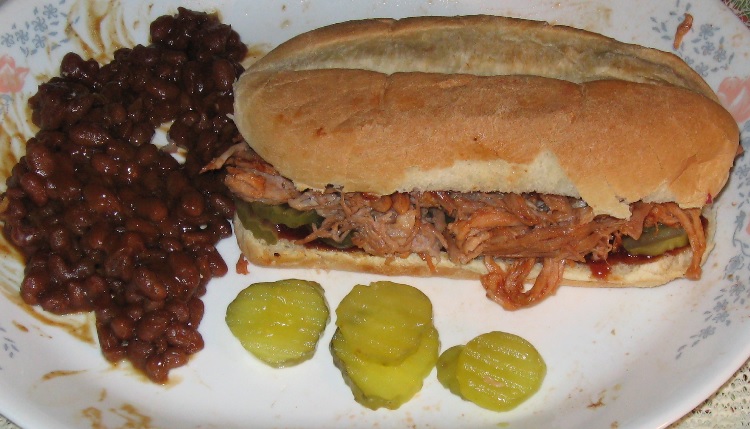 Location
below polar circle.. in country which used to make

happy to see this thread still alive. and you guys too. (i was cured of flashlightholism, or so i thought, now i bought one or few again. so i had to come to cpf to say hi to other junkies.)

Welcome back to the light side :devil: 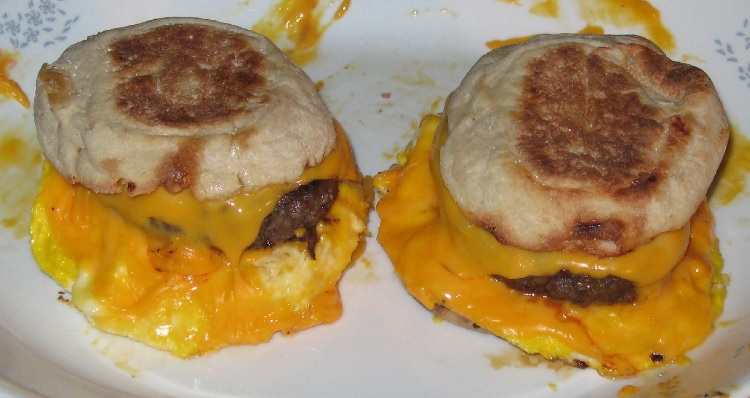 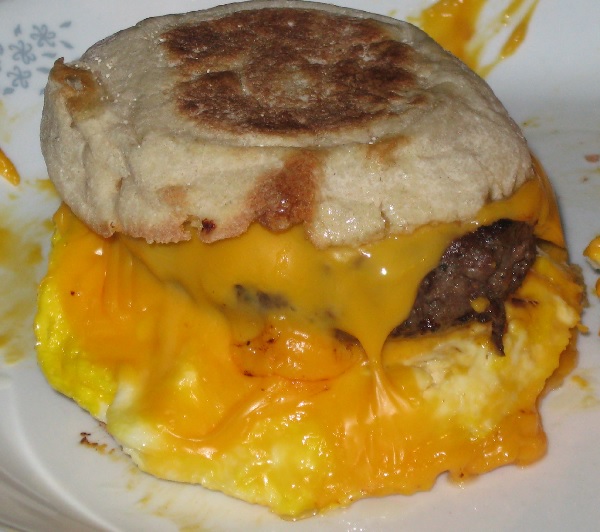 Wow, nobody posted in a whole week?

Nothing but spinach salads, diet frozen dinners and celery sticks with fat free green onion dip. However, I did it proper today.


Bacon Cream Cheese on an Onion Bagel! It's good, but needs more bacon flavor and larger bacon chunks. Jalapeno is still my favorite. 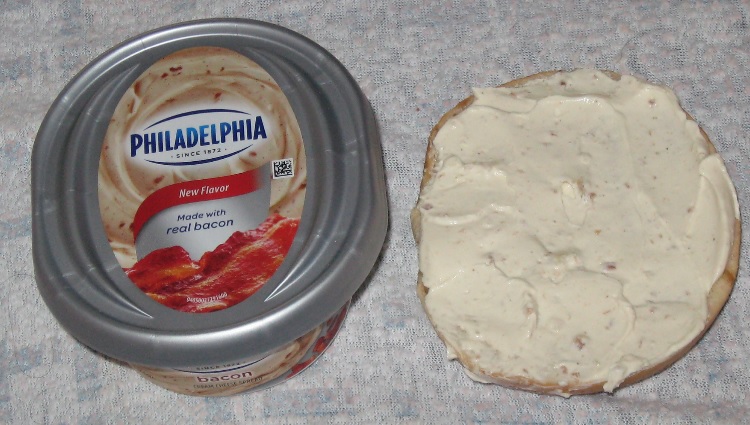 Solid Lifters said:
Wow, nobody posted in a whole week?
Click to expand...

Took my camera to the secret location.. 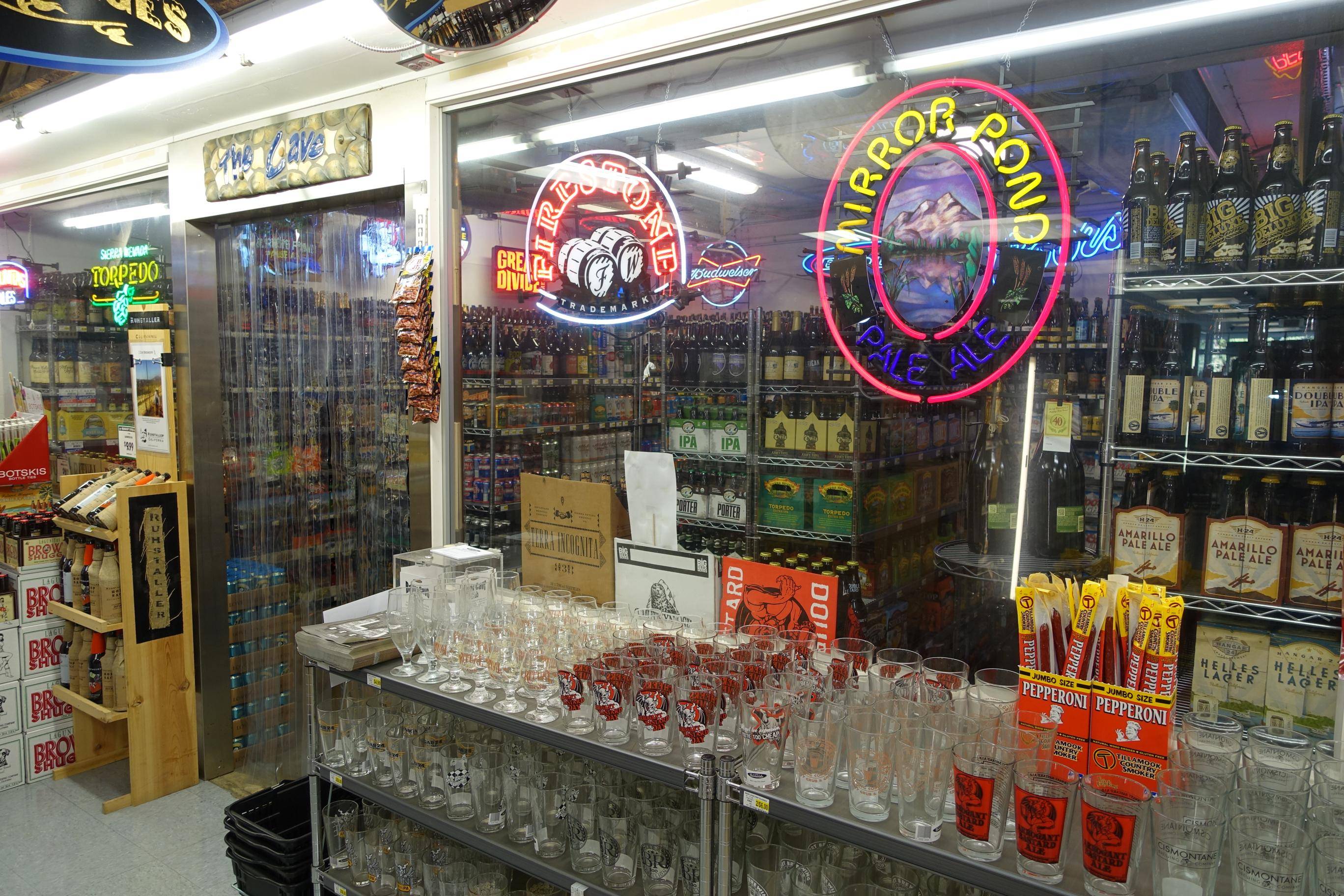 StarHalo said:
Took my camera to the secret location..

Indeed; cases of Brown Shugga on the left next to the Sumpin' Wilds, quarts of Sucks next to growlers of Dead Guy under the Firestone sign..

StarHalo said:
Indeed; cases of Brown Shugga on the left next to the Sumpin' Wilds, quarts of Sucks next to growlers of Dead Guy under the Firestone sign..
Click to expand... 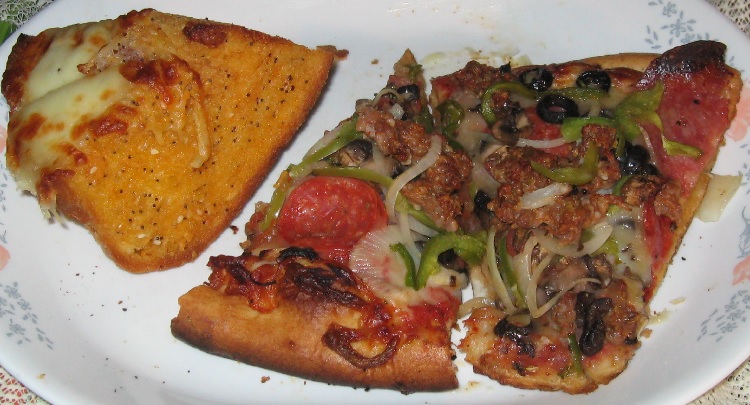 Everybody was home together, so I made a quick dinner. Polska Sausage dinner. 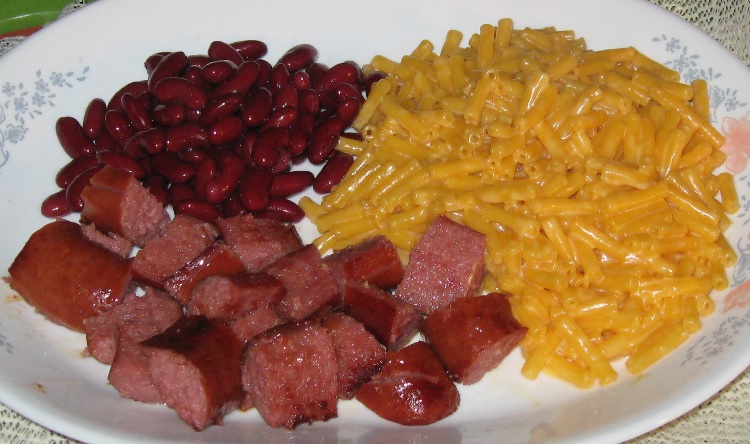 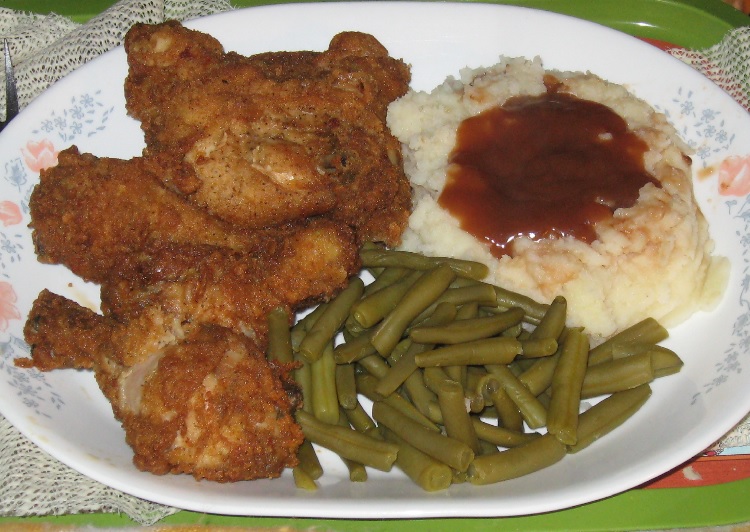 Fruit and fruit with extra fruit on the side:

I'm new so I have no idea if I've missed a five-page discussion on this, but who else makes their own bread? Only with a bread machine, but I still love experimenting. Mostly I make sourdough, there's a starter in the fridge called Herbert. Here are some I like making:

Wholemeal - a bit of barley flour for moistness, then half and half brown flour and wholemeal flour for the rest. This is my main bread base, and the sourdough starter is usually fed with brown flour.

Saffron bread - the recipe is a white bread base, but by now I make it sourdough and /or with brown flour. And with walnuts. Heaven. My partner eats it with cheese and pickles, which is one if the times when I ask if he's sure he's not pregnant. I should get pecans and try them in there.

Walnuts are awesome in bread generally. Sometimes I put in sesame seeds, or occasionally sunflower seeds. I've only tried pumpkin seeds in a blend of other seeds, I should try them on their own.

Rye bread, with caraway seeds naturally. After the brown flour sourdough starter is in, I like a third light rye flour and the rest brown flour. I'm having trouble getting hold of anything other than wholegrain rye flour, though, so I might try having that with white flour to balance it out.

There's a recipe for Indian spiced bread with chickpeas (not a sourdough) I trot out occasionally. It smells out of this world when you're cooking it. The top tends to collapse for some reason, though.

I have made the odd sweeter bread with tea, spices and/or raisins, that sort of thing, though I'm not in the mood as often. Banana bread was unexpectedly lovely, I should make that again. Apple bread was nice, you cook the apple pieces with butter and sugar first, but not all that exciting, I don't bother with it often. Generally I just make saffron bread if I want a sweeter one.

I have just acquired poppy seeds, so today I will be trying those! I've never had them actually in the bread, just sprinkled on top. I might try a lighter bread with them, either all white (after the brown sourdough starter) or half white and half brown, to let their flavour stand out. I suspect they'll be a good addition to saffron bread.

Welcome to CPF. Perhaps when you're not too busy, you might post a picture of your bread. It all sounds so wonderful.

Location
below polar circle.. in country which used to make

picture yes those are good. recipes better i bet there might be few around in one of these threads.

tomorrow if i have the time i will be making some karelian pies/pasties. have to try out my new pastamaker on that dough. (funny i bought it few days ago, with intent to use it to start making my own lasagne few days ago and it seems that first time it will be used will be something it was not designed to do like karjalanpiirakka. hah.) if i dont have the time tomorrow. then i need to buy some from stores, then i will be making some on the 26th or something.. after xmas anyways.

I like the idea of walnuts in the bread. I had some bread recently that had nuts in it, though the type of bread escapes me at the moment. It was very good. My mom made these popovers last week and I had a crack at 'em and they were really tasty. Very light, fluffy, a little flaky. Dad and I shoved butter and jam inside. Nom Nom Nom. Like these.

Can't bake worth a darn! Welcome to the best thread in this place! 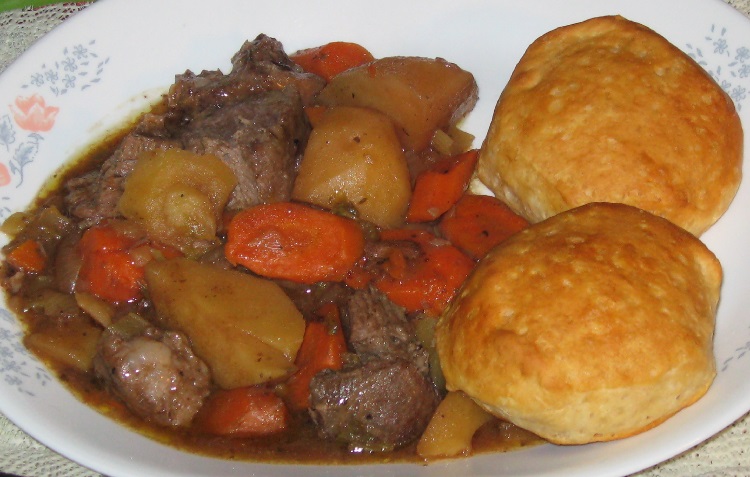 I started with some oblong patties of fresh-ground 80/20 from the local QFC.

Then placed them on some sourdough bread with two kinds of white cheese, some sautéed mushrooms & onions, then toasted the whole sammich in a frying pan. 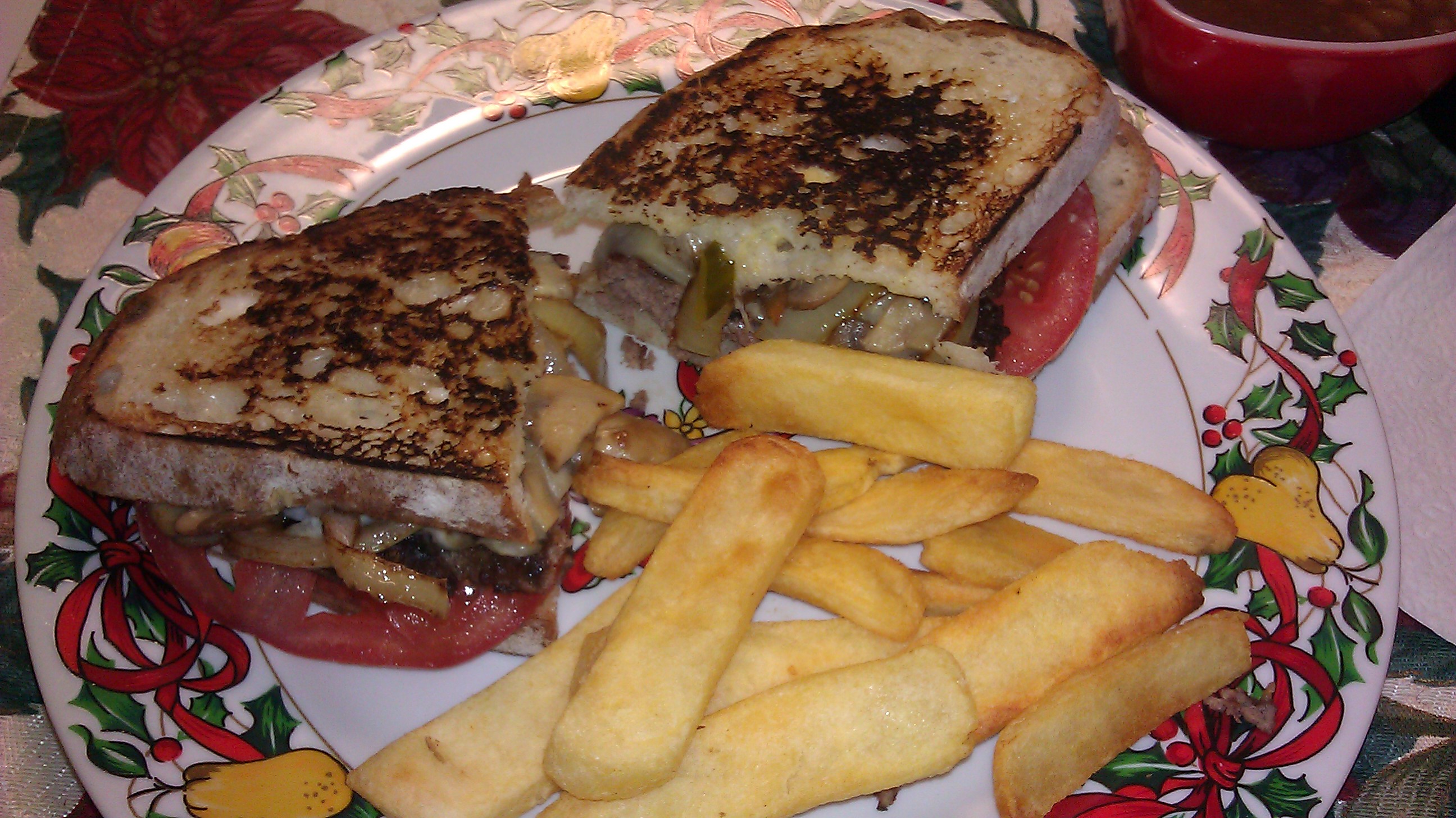 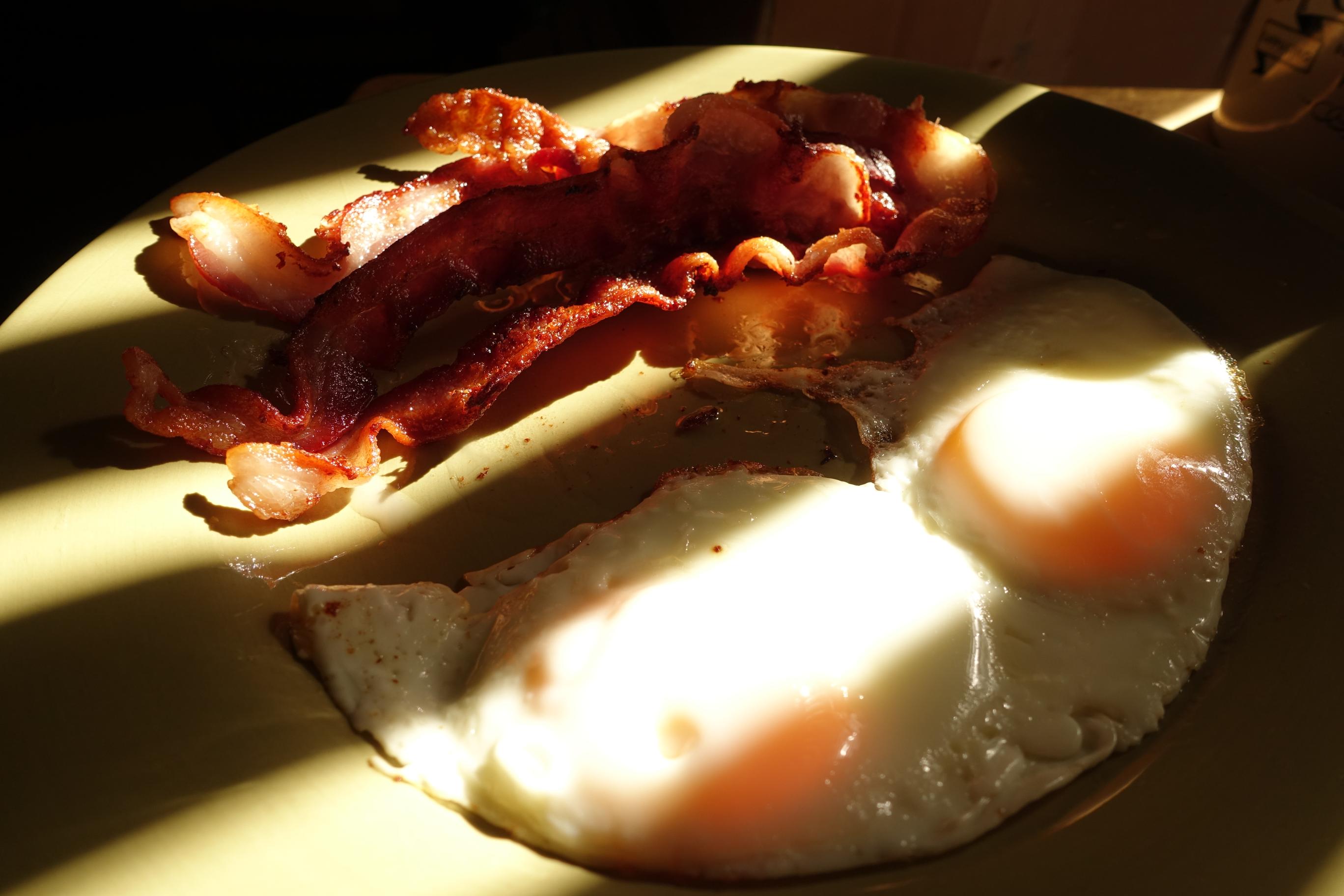