correct
our eyes are not very sensitive to differences in lumens
HDS uses a ~44% increase between each of the 24 steps (one of the levels goes from 4.6 lumens to 6.6 lumens on my meter, for my Rotary)
that percent increase is required to "notice" the change from one level to the next

Also not only differences in color temperature, but also differences in hotspot focus, add to the confusion our brain has to sort through.. for example comparing the Fenix beam to the Yuji beams

disclaimer, my light meter is just a homebrew affair.. it tends to read about 15% low, but you can rely on the numbers I posted, as directly comparable, since they were on the same meter. There are also small differences in lumens, based on which battery I use, which is why I decided to use the same battery for the comparisons.

Im very happy to have both Yuji LEDs, and very happy not to use the angry blue Fenix.. but no offense to anyone that is happy with their Fenix.. when a light is needed, any light is better than no light.


Im pretty much done with the purple tinted Fenix after this pic.. but in parting I will say, it throws much farther than the Yuji LEDs..
otoh, the evenly floody Yuji beam is fantastic as a reading light or arms reach headlamp. I prefer the 3200k Yuji after dark, and I prefer the 5600k Yuji when my brain is whitebalanced to daylight.

Hotspot overexposes part of the pic: 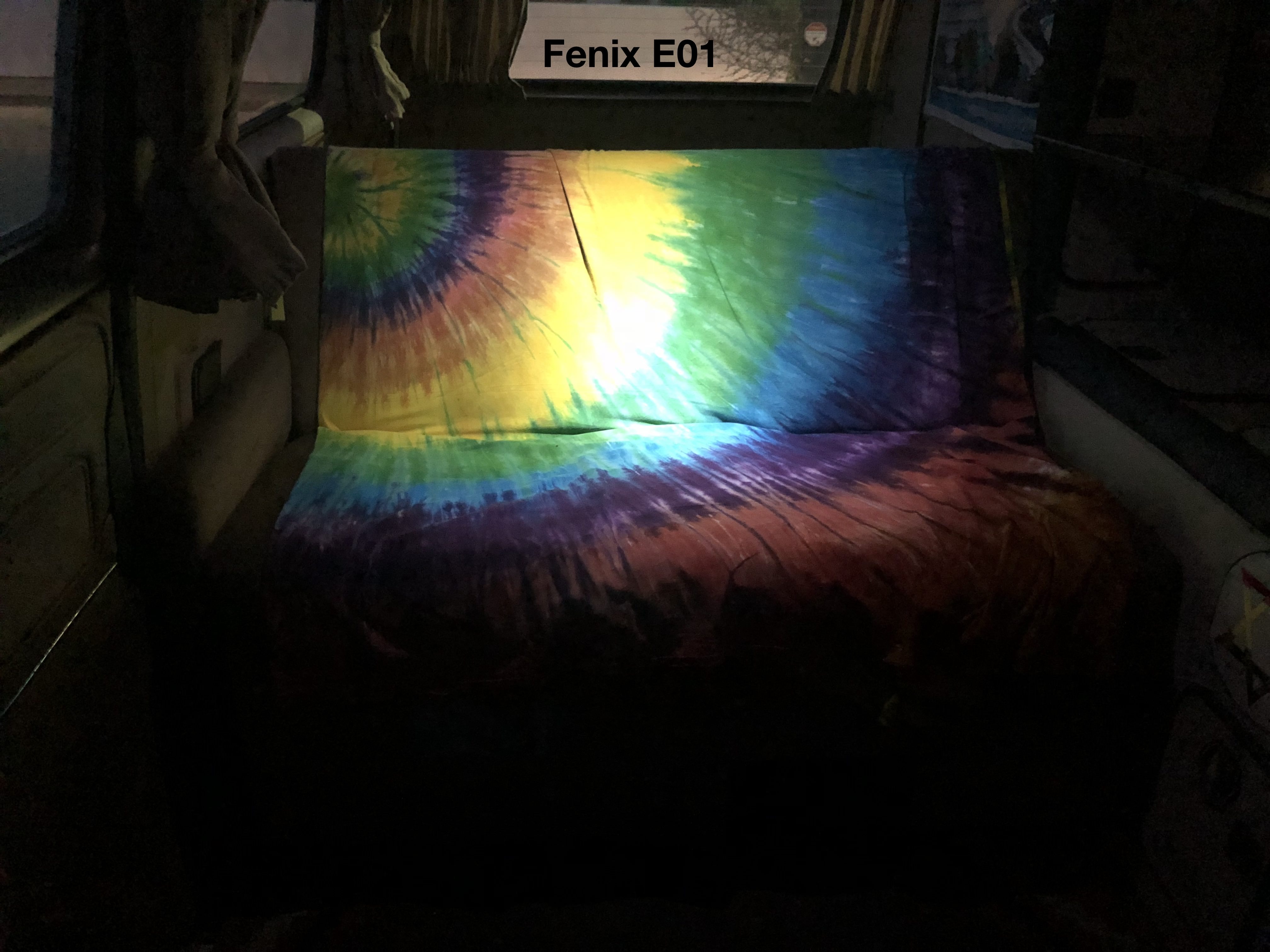 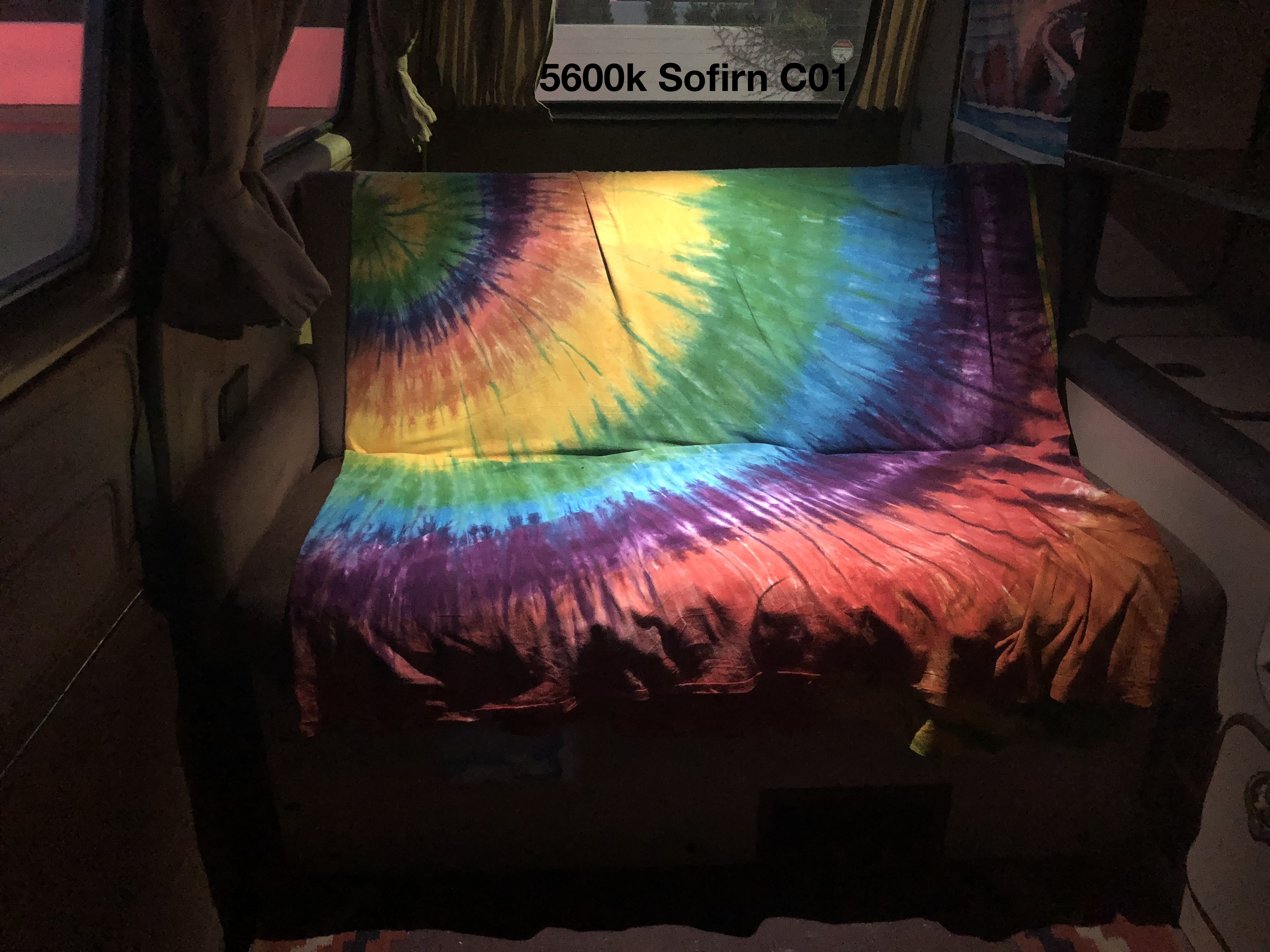 Gotta Love the Warm Yuji when its time to get mellow: 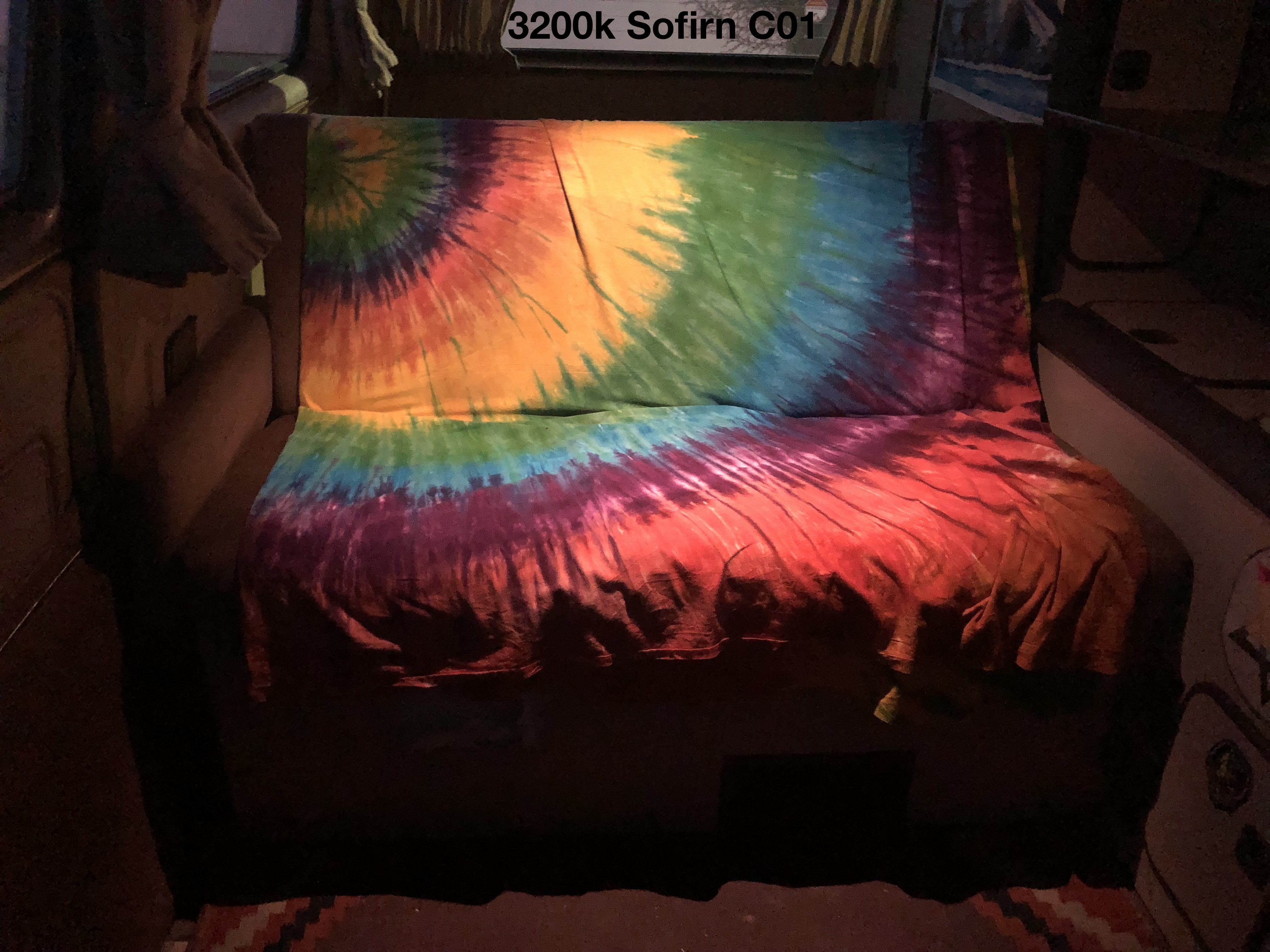 damn I knew I should have bought a 5600K as well. for close up work it is amazing compared to the E01. I think I will still really like the warm but that last pic really shows what the 5600 is capable of!!

Jon, those three photos of the sunburst tie-die quilt are perfect. The most useful and accurate depiction of the differences between the three beams that I could imagine.

That E01 beam -- it's ugly, it washes out the colors, and it does not even illuminate the entire quilt. But it has more throw, that's for sure! If you need to deal with things 10-15 meters (30 - 50 feet) away from you, and you don't care about color-fidelity or peripheral vision, then it is the best choice.

The Yuji beams are just beautiful. Smooth, even, lustrous and flattering to the colors. If you are doing a photo-shoot and you want your product to look good, this is the light to use. Your food will look more delicious, your artwork will look more beautiful, your human model will look more alive and vibrant.

Even in these two pics I have a preference for the warmer color, but the cooler tint is very nice, too, and perhaps gives slightly better articulation to the green-blue-purple band on the upper-right.

Honestly, this is an amazingly good record of what my eyes see in real life. Now you have it, folks: here's why you buy a light with a Yuji emitter in it.
J

Warmcopper123 said:
thanx for taking the time to putting up such an informative entertaining post
Click to expand...

lampeDépêche said:
If you are doing a photo-shoot and you want your product to look good, this is the light to use. Your food will look more delicious, your artwork will look more beautiful, your human model will look more alive and vibrant. .
Click to expand...

thank you both for the very kind words of support

the versatility of having Both Color Temperatures is Vantastic!;-)

fwiw, the inside of my Van has lots of places to stick a magnet, and I keep several in different spots. This allows me to place a Yuji, and aim it as needed, without having to permanently attach a magnet to the light itself.

These Yujis are perfect for close range applications.

It is amazing to me that the C01 in both tints 3200K and 5600K have the same CRI. They are very different to me. Very fascinating indeed.

People often associate CRI = "rendering a color in its most true shade". When you have two different tints having the same CRI, yet colors look so slightly different. The human eye is so complex and wonderful that something as simple as a green leaf to 'person A' could look different than how 'person B' processes it.

The uniqueness only the LED brings to us. We would not normally see this as the incandescent bulb only really has one small tint temperature range determined by how hot the wire gets.

Actually, if you look at the spec sheet, the CRIs are close, but not identical, IIRC. But when both are above 90, the difference in CCT probably has a greater effect than any difference in CRI
S

Can someone post a physical size comparison between the two lights please? I'm interested in length and thickness.
V

Lengths are almost identical (71.1 vs 71mm) probably just a rounding error.
Not sure about thickness but read heads are interchangeable.
S

Looks like the C01 is a wee bit heavier. maybe slightly thicker walls? that would be nice!!
J

My guess is the fenix weights 7% less because of the flat sides, which makes it thinner wall at those locations
I dont have calipers, but to my eyes and hands, the length and diameter are essentially identical, as is the thickness of the exposed battery tube edges when I remove the head 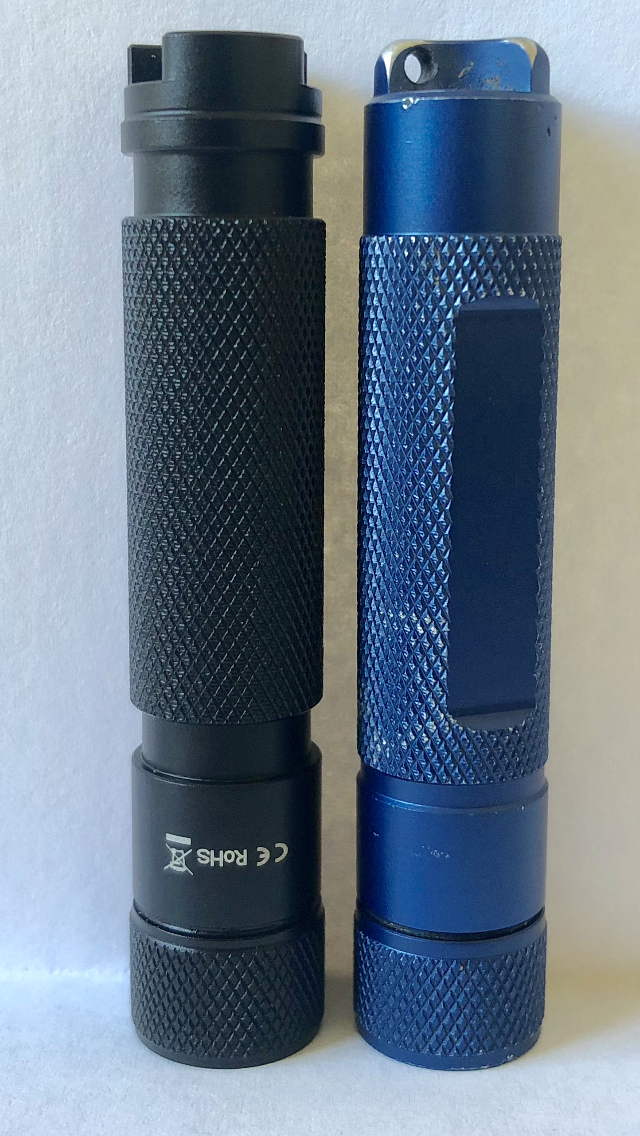 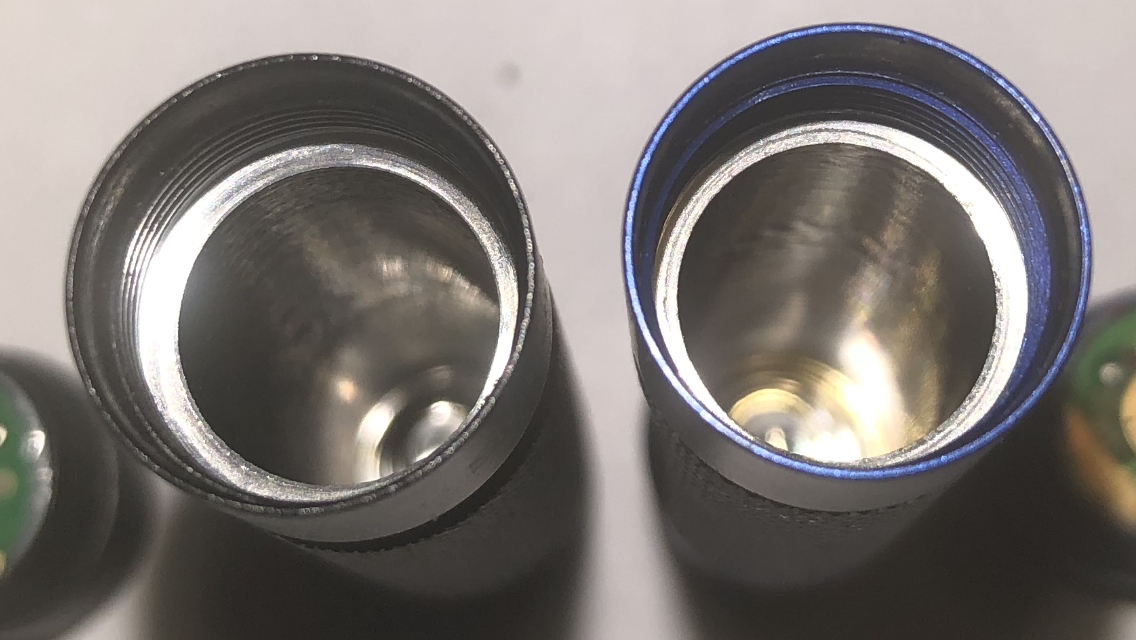 I dont think the tailsculpting accounts for the weight difference 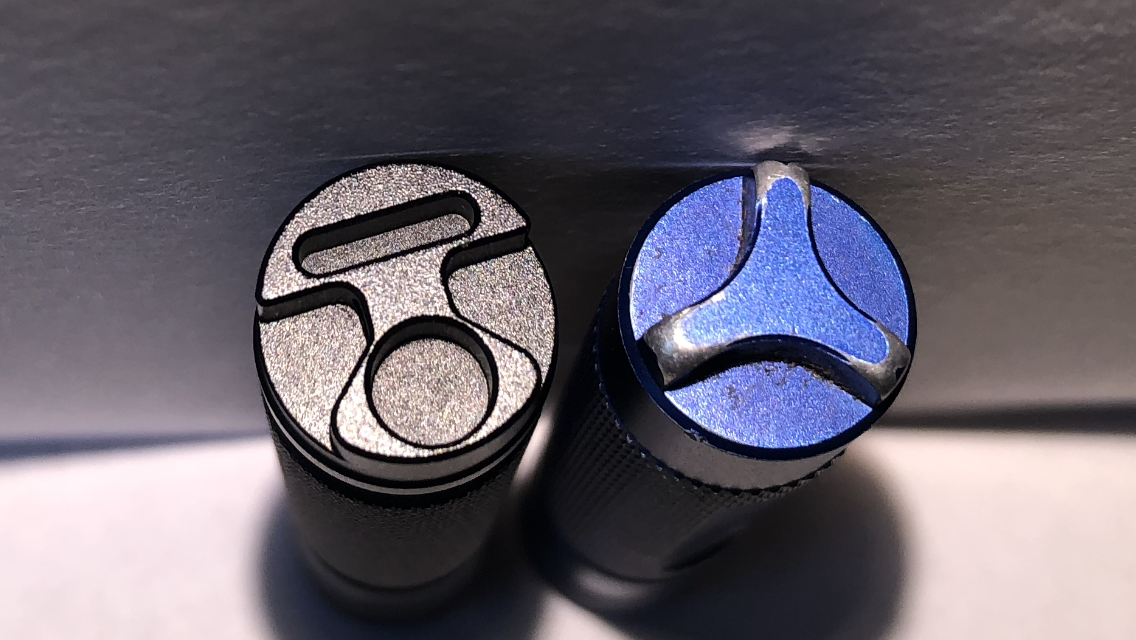 Note the Sofirn C01 hanger hole is centered, so the light hangs straight. The E01 does not hang straight, since the keyring hole is not centered. Its a little hard to show in a photo, but this will give some idea 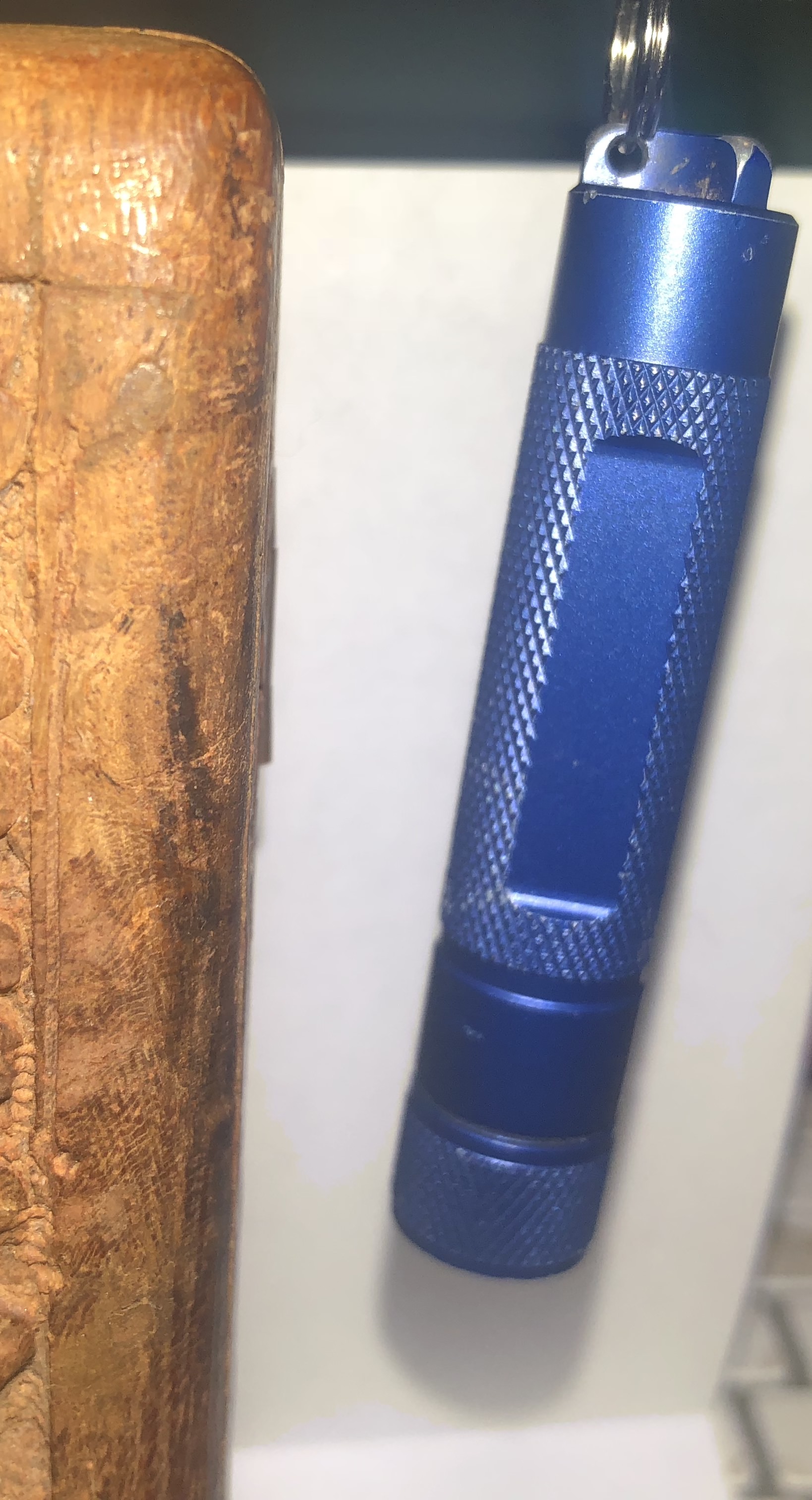 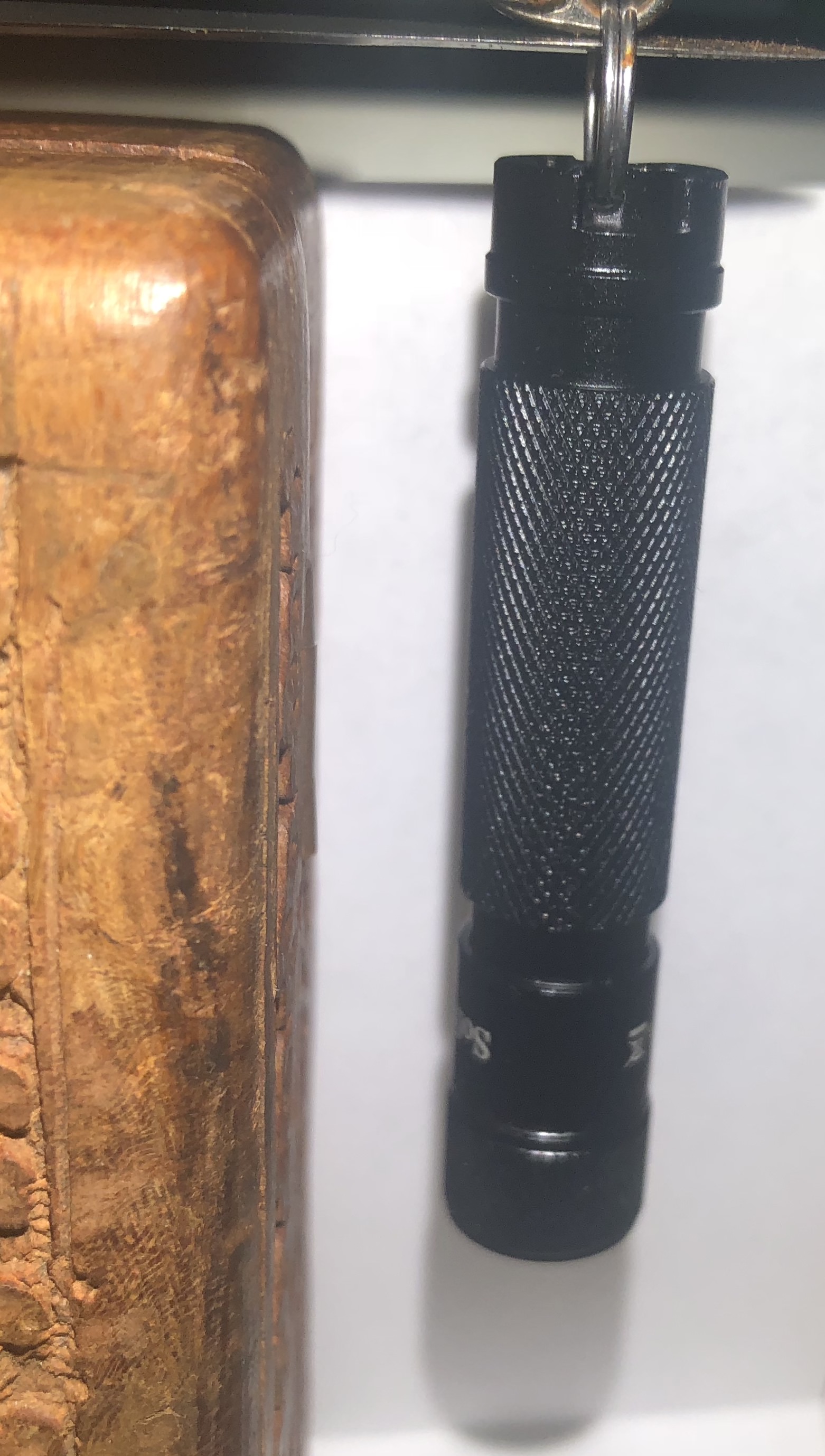 Thanks for the replies. I really can't offer anymore opinions without actually having one.

That being said, where can I order a 5600k version?

this_is_nascar said:
Thanks for the replies. I really can't offer anymore opinions without actually having one.

That being said, where can I order a 5600k version?
Click to expand...

The Sofrin Store on AliExpress.

centered keyring alone makes it all worth while !!!!
B

10 years from now people will all be posting how the sofirn is the greatest cockroach light of all time. Haha
D

Now that these C01s are into more people's hands, it's time to ask the tough, million dollar question. In a real, emergency situation, with only 1 light in your posession, what real advantage(s) if any would these Sofirn's have over the Fenix and it's more efficient LED? If the Sofirn's driver is supposed to be just like Fenix's, that would technically make the E01 brighter and therefore more useable for longer.

Which light would you all choose of these 3 and why?
J

defloyd77 said:
Now that these C01s are into more people's hands, it's time to ask the tough, million dollar question. In a real, emergency situation, with only 1 light in your posession, what real advantage(s) if any would these Sofirn's have over the Fenix and it's more efficient LED? If the Sofirn's driver is supposed to be just like Fenix's, that would technically make the E01 brighter and therefore more useable for longer.

Which light would you all choose of these 3 and why?
Click to expand...

If the Fenix is more efficient, its because it is Low CRI.
Efficiency favors low cri and high color temperature
I do not prioritize efficiency, I prioritize CRI, that is what the Yuji LED is all about

so, I would not choose a Stock Fenix E01 at all, it is not in the same CRI league.
The other Yuji lights are the McGizmo Sapphire, for people that like titanium, and dont mind paying USA manufactured prices (no hatclip though). And the Vinh Fenix E01 w Yuji LED, the same LED as the Sofirn, but in a Fenix, if someone wants that brand, for whatever reason.

I choose the 5600k Sofirn C01, because CRI is high priority to me, and I wanted to experience a High CRI Cool White (I consider 5600k Cool). If you want to gift me a Sapphire, I would like it to be the cool Yuji please.

Im very impressed with the Yuji LEDs.
I never carry my Fenix E01 because of the blue hotspot and low CRI.. Im a snob


I think these High CRI Yuji lights are especially good for learning about CRI and color temperature, and what ambient light favors 3200 vs 5600. 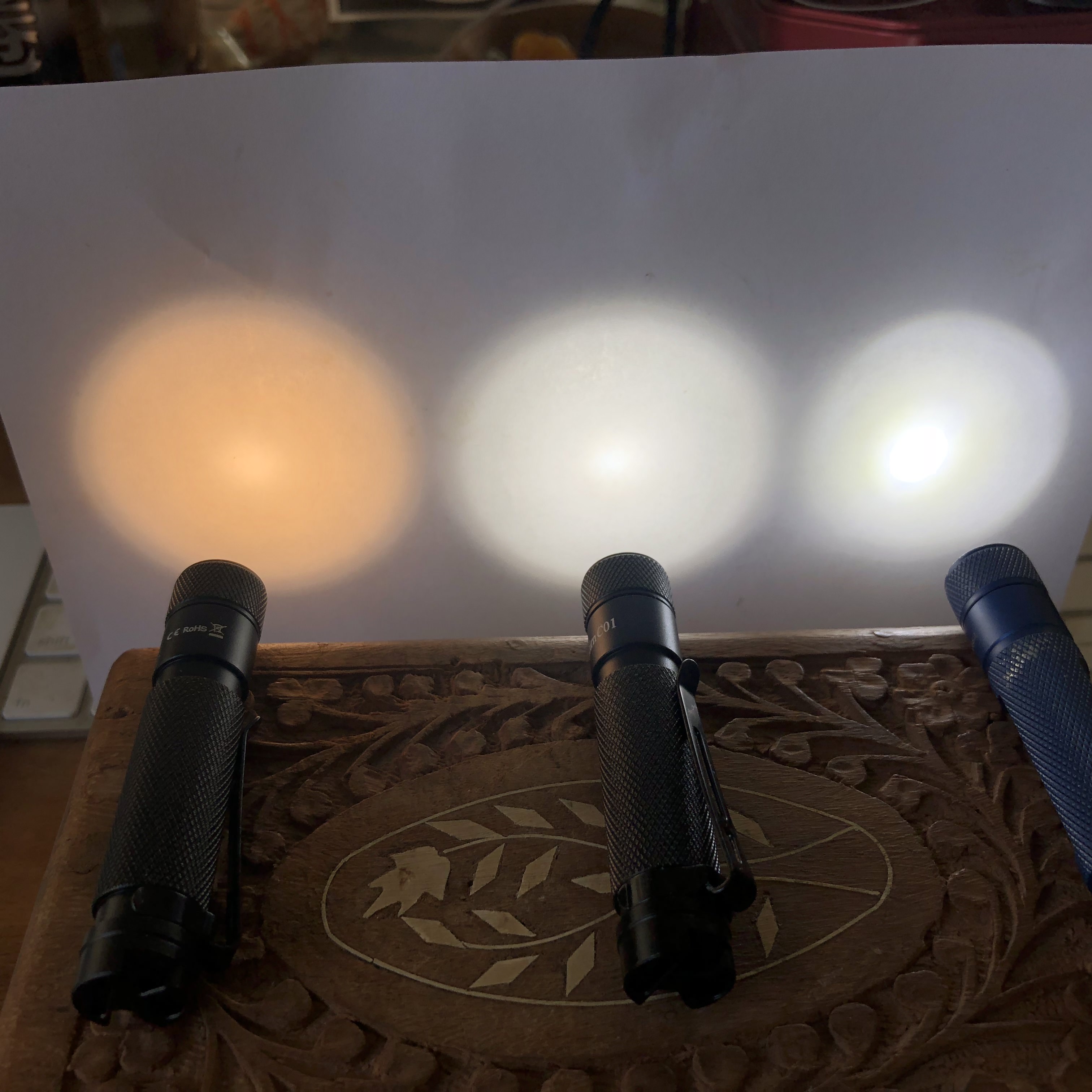 The Red and Blue have large hotspots that I did not want, I may have to rough up the reflector cone.. 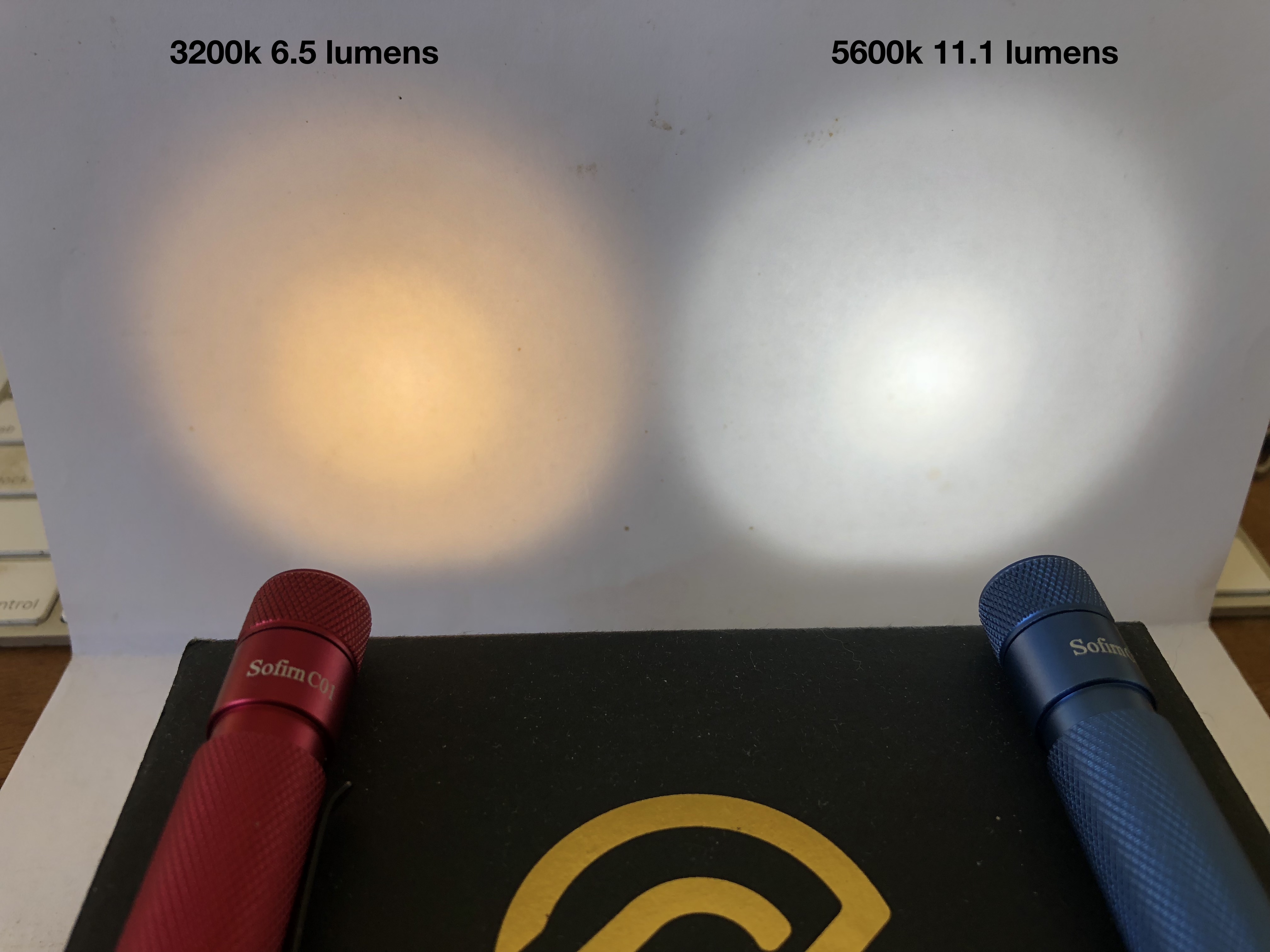 Beamwise, the McGizmo has the nicer beam imo 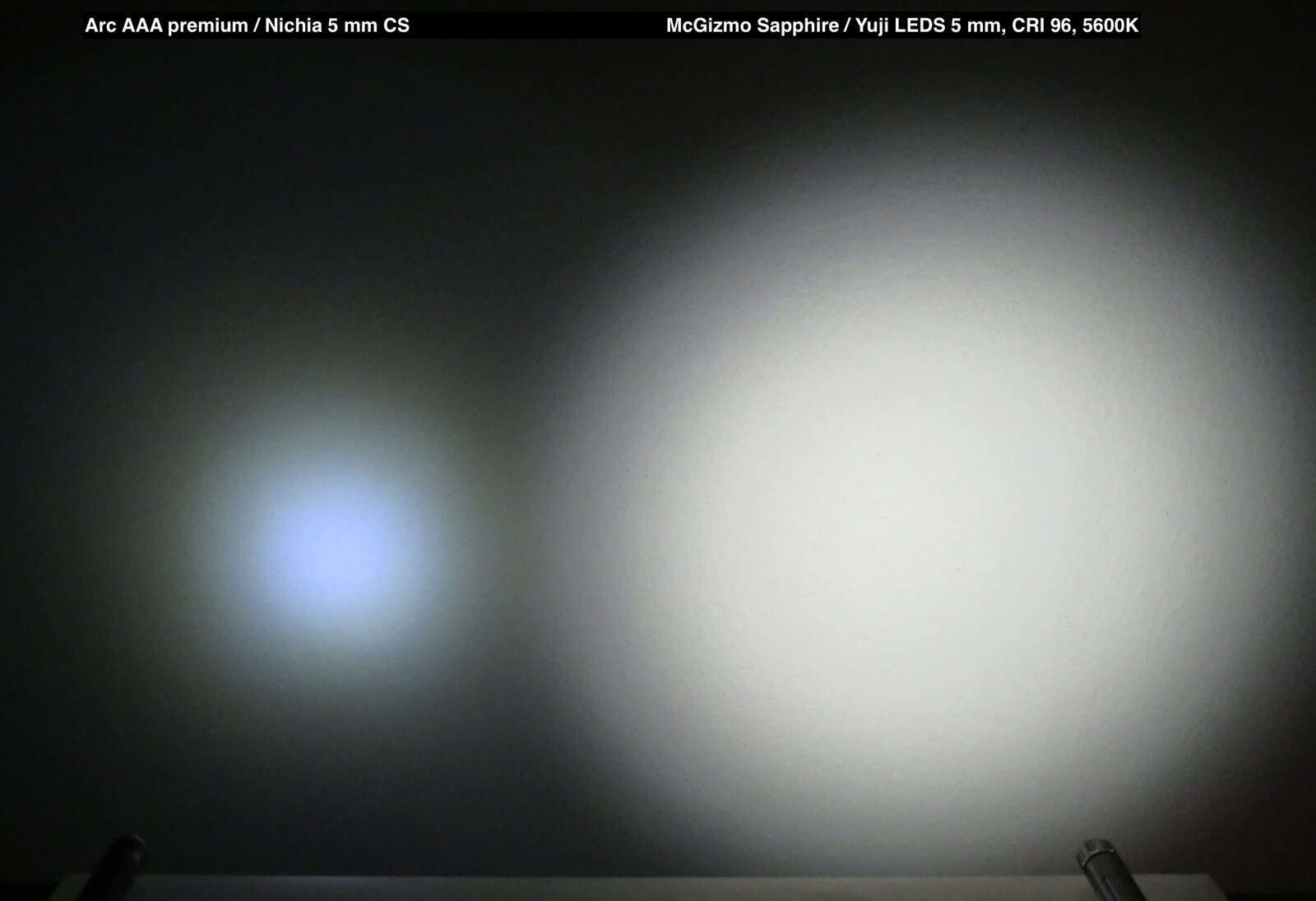 the McGizmo uses no reflector, preserving the Aspheric beam built into the Yuji LED

Has anyone posted a direct run time test between all three lights? Don’t mistake brghtness for run time. Is the underlying LED nearly identical and the increased lumen(s) from the nichia from converting less phosofor to different colors? Is the Yuji actually superior working down to a lower voltage and despite losing a lumen to the nichia, talking a lumen here or there, actually run longer?
You must log in or register to reply here.
Share:
Facebook Twitter Reddit Pinterest Tumblr WhatsApp Email Share Link

Is the EZAA and Expensive Fenix E01?