It was two months ago today that I approached Fred, seeing if he'd ever considered a small light with a 1/4-20 socket, so it could be threaded onto a tripod, or more specifically for my purposes, a worklight for the third hands setup in post #22 of this thread.

The qualifications were as followed (described by Fred in the thread he started here about this light as a work-in-progress):

Two months later, the light has made its way to its new home, and I couldn't be more pleased. :twothumbs

The machining couldn't be better! Perfect diamond knurling, excellent fit and finish, threading cut so precisely that it's scary, buttery smooth twisty action, and assembled so intricately that I'm beginning to wonder if Fred truly is 100% human.

The full-body checkered knurling is there to provide grip, and to hide fingerprints. The "dimples" make for a great look - they're perfectly drilled.

When screwed into some flexible tubing, the light operates just like I'd want it to. It integrates perfectly into my third hands setup - accompanied by three third hands made by GRS Tools and a flexible magnifying glass made by Donegan Optical (see the above-linked thread for more photos of that setup). When attached to the flexible tubing, the operation of the light is outstanding - just what I wanted. The on-off twist doesn't budge the position the light is in - so you can turn it on, point it at your work, and then adjust the levels or turn it off, without it ever moving.

The stippled Khatod reflector throws a super-useful floody beam - but with the FluPIC's burst setting, this sucker doesn't have to be just for close-up work. She's bright.

The 1/4-20 socket is awesome - so useful. :thumbsup: And after I'm done using my third hands station, I can unscrew the light in about 1/2 second, and put the light in my pocket, as an EDC light - it's O-ring sealed, which is a plus for a city bicyclist like me, who's about to get bombarded with lovely Chicago snow, salt, and grime, :green: on the ride home tonight.

I'm a bit of a perfectionist, so I know to keep my expectations in check when I get a new flashlight. However, this light hasn't just exceeded my expectations - it blew them away. oo: Wow. I couldn't have asked for a better light.

Thanks Fred for your awesome work, great photos and explanations, cool attitude, and AMAZING light! :twothumbs

I'm glad it will be joined soon by a big brother Blocky Boy and ninja cousin the Luce de Notte, and anything else that comes out of the Photon Fanatic Factory! :naughty:

wow that is REALLY sweet! looks like an uber mini blockyboy

I Really do like that flex tripod mount you have too!

Working with John was a pleasure--he actually read and considered what I sent to him.

And he was in no hurry, which is good for procrastinator Fred.

where is the gap between head and body? AKA what part do you twist?

The junction between the two pieces is right in the middle, there are four blocks on either side: 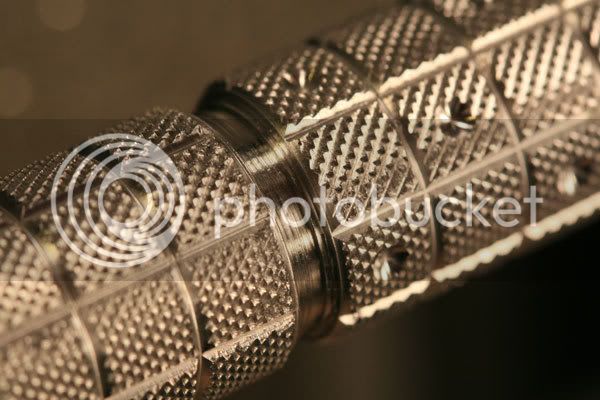 You twist the head, where the light comes out, to turn the light on/off, or to select the output level that you need.
Last edited: Mar 27, 2008

Location
Outside the Matrix

Sweeeeeeeeeet! Any hints of offering up some for the rest of the world?

matrixshaman said:
Sweeeeeeeeeet! Any hints of offering up some for the rest of the world?
Click to expand...

LOL - I guess I could've said how it worked! I was too anxious to use it when I was taking pictures - I meant to take a disassembled photo! :shrug: Thanks for steppin' in, Mr. Fanatic!
:wave: john

If you decide to make any more of these,
I am a definate YES for one!
P

If you decide to make any more of these,
I am a definate YES for one!
Click to expand...

I am definitely giving some consideration to have a run of, say, fifty pieces made. First I need to find a machine shop that can do cut knurling. I have a candidate firm in mind and will send the files to them next week for a quote.

If they are made, I would then have them EN plated.
W

I would be in for 2 if it goes forword

Very Nice Fred :thumbsup: I am not normally a fan of knurling, but with your added blocks & dimples it looks really
P

Put me on the list for 1 please!
really love it
L

Put me down for a couple as well.:thumbsup:

I am definitely giving some consideration to have a run of, say, fifty pieces made. First I need to find a machine shop that can do cut knurling. I have a candidate firm in mind and will send the files to them next week for a quote.

If they are made, I would then have them EN plated.
Click to expand...