Hey all, Had this nice piece of alum sitting around. Thought I'd build myself a nice field use work light. Thought I would pop up a few pictures for some second opinions.

You guys think there is enough heatsinking? will be running at 2100mAH, about 8400lM. 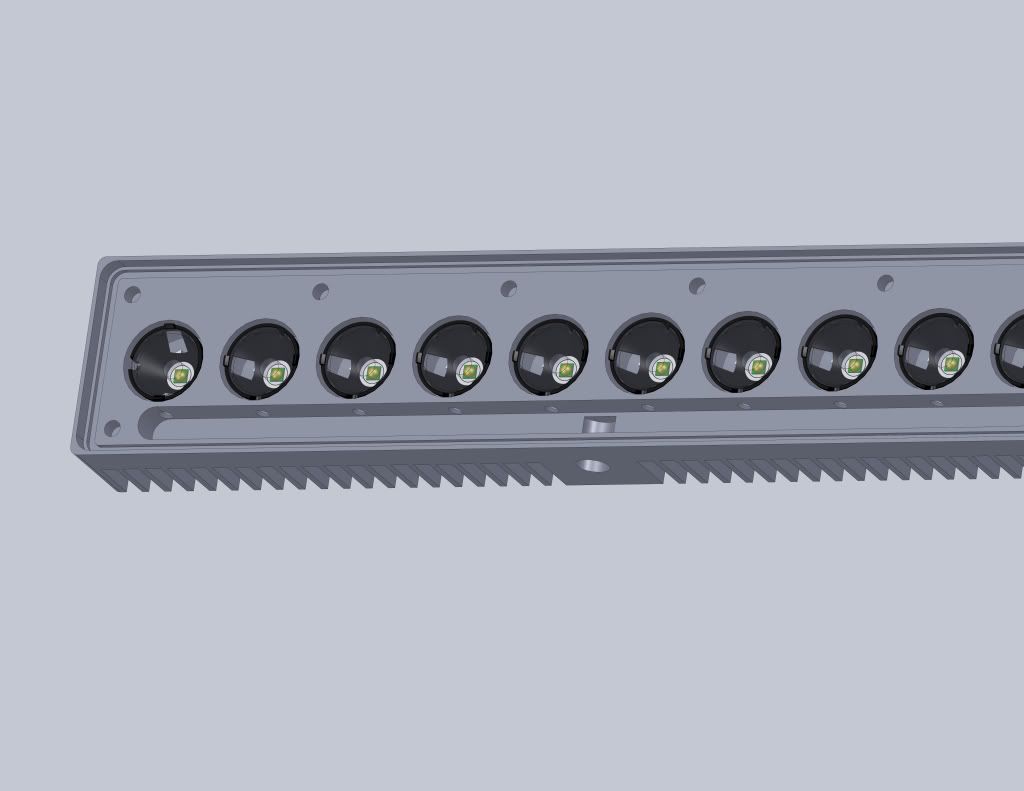 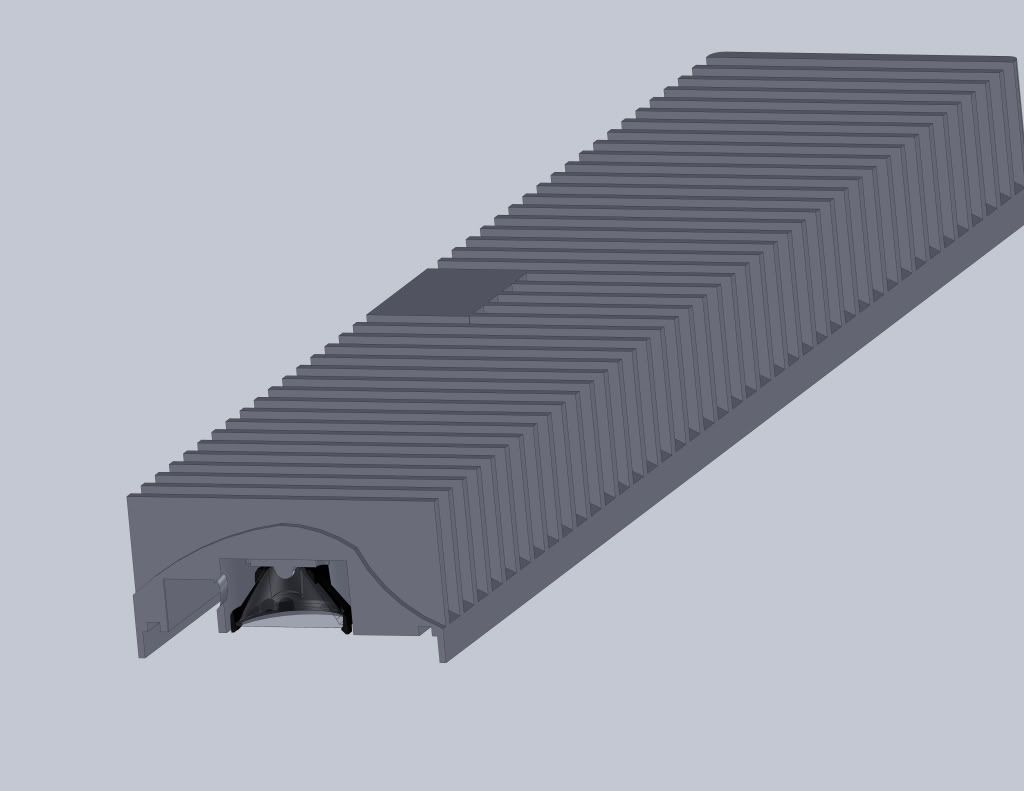 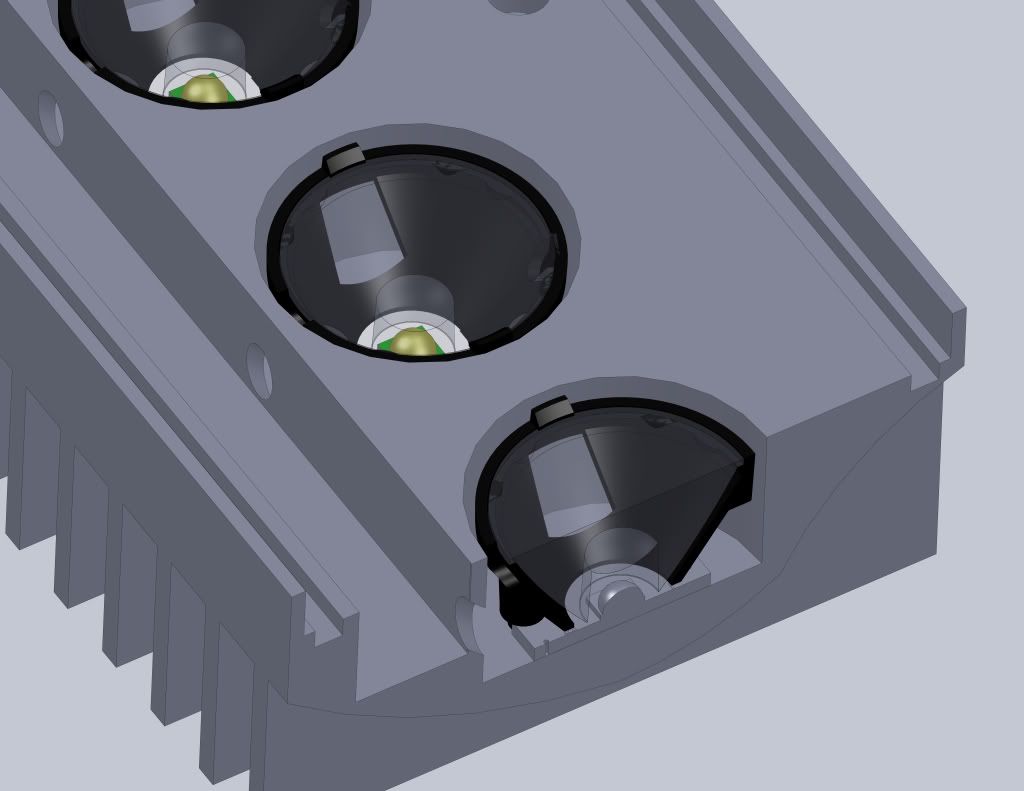 I'm tring to replace this, Too noisy and heavy.

I was thinking of using a BuckBlock. I have one also for 2100mAh running my christmas lights. Seams to work nice.
S

You guys think having this anodized would effect the its ability to dissipate or transfer heat??
C

Black anodizing would increase the emissivity and more heat would be lost via radiation, but im pretty sure people generally overestimate the effect that radiative heat loss plays in flashlights on here.

The layer of anodizing would be so thin that other effects would be negligible. By all means get it anodized to increase corrosion resistance
Y

Thats some very nice modeling. I think it will be pretty awesome and bright.

"will be running at 2100mAH, about 8400lM" did you mean it woudl be running with a currecnt of 2100mA or that the battery that woudl be powering it had 2100mAH capacity? i'm not trying to be a **** i was actually wondering what you'd be usieng ot power it and assume you were going to run it at 2.1 amps.

heatsinnking: 60 or so watts over a finned bar that si 9-12 inches long? More is alwasy better but I think it would likly be ok.
S

Yep, Didn't even notice I typed in mAH. Lol, spent yesterday looking at rc batts. Yes, would be 2100mA per led. This will end up being an all in one unit built into a Pelican case. Set the case down, open the lid, extend the 8ft pole and flip the switch. As such need smaller batteries. Was thinking about 2 of the 58000mAh 10S 25C Lipo's. Should give me at least 5 hours of runtime. More if I take advantage of the dimming ability of the BuckBlock.

You guys think there is enough heatsinking? will be running at 2100mAH, about 8400lM.


what is the surfice area or the heatsink? how far apart are the fins?? someone said 10sqin per watt. don't know if it is thru but sounds reasonable. i never mesured or calculated heatsinks, i just guestimate, so far it worked, have good and bad experience, but if drawing is correct scale, i'd say it should work, looks big enough.

but that takes care of heat transfer after heat came from base of the star, the biggest bottleneck is the star itself, not all stars are made the same, 99% have thin layer of insulation between led's heatpad and the star itself, the led itself sits on layer of copper foil, some stars have thicker insulation, some thiner, (better heat transfer), some have large foil area, some small.

the best stars as of now is 16mm stars from ledtech.de they have heatpad sit directly on copper, with no insulation between, also xml stars from led supply, seem to have large foil area, can't say how thick insulation layer is, but i have not had any of them fail yet, so i'd say they are good too. but at 2100ma, they should work just fine.
also, if you,ll be using carclo 20 or 26,5mm lens for your flood light, use frosted, the lenses show a square around hotspot, and it is a bit off center, with clear lenses. carclo holder works great with 20mm star, it also works great with german 16mm star, after simple minimal filing.
S

Also, Here is another view: 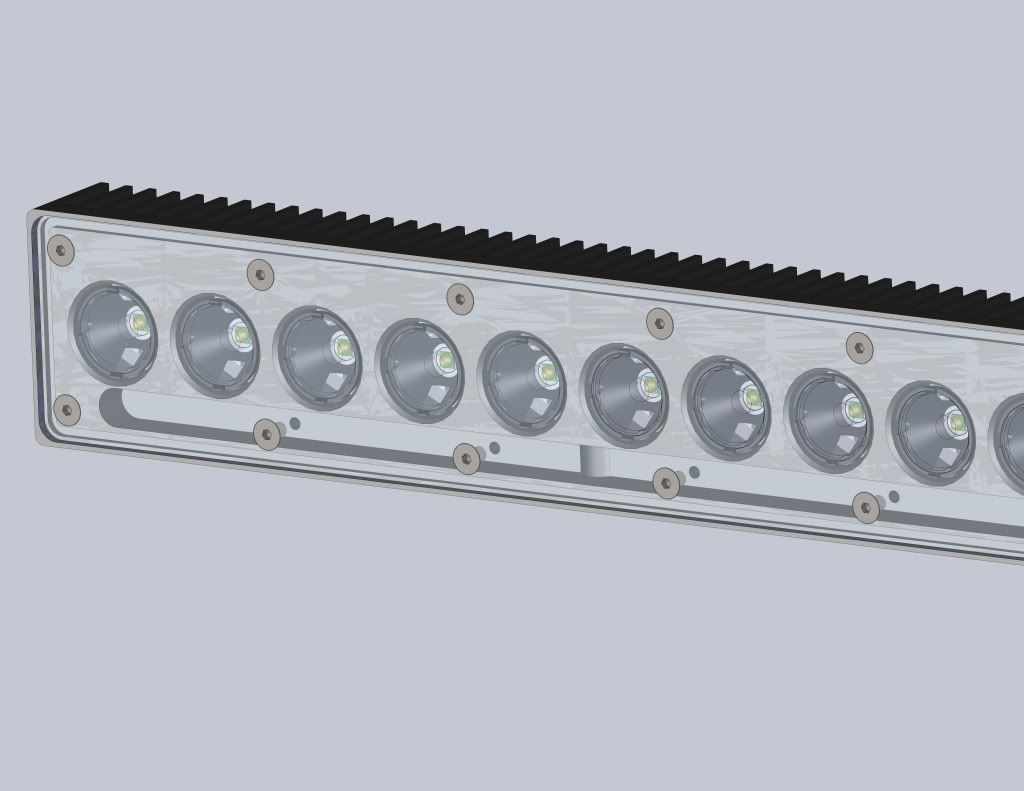 there is got to be more dissipating power in that chunk of aluminum than 15watts, something wrong with that number, imo.
A

Looks good, I'm thinking of making something like that too for under my cabinets. How are you wiring it? I would like to see pictures of the real thing. In series or parallel? What are you using for Vin?


alpg88 said:
there is got to be more dissipating power in that chunk of aluminum than 15watts, something wrong with that number, imo.
Click to expand...

That chunk would only be good for ~2.5 leds then. Our flashlights would need wheels. :nana: But you also have to measure all the surface area of the fins.

Nice build but I think your screw holes in the plexi should be outside the gasket ring or does each screw have an oring?

is that a vent channel along the leds? is there a valve?

this is actually a pretty nice setup you got there.... I could use something like it for outdoor events, although it would most likely be built into a Honda EU

If you want to increase driver redundancy... I suppose this could work
http://www.cpfmarketplace.com/mp/showthread.php?269770-1-8A-Circuit-Boards
Last edited: Apr 11, 2012
S

The channel is for the wiring. There is a cross hole drilled from the slot to each led. Like I said, the Surface area of the fins is 152. And thats only the fins. will be ran parallel on 32 volts.
A

How is this coming along? Would like to see running
S

Curently going through some design changes. Completly spaced out and ran the oring OUTSIDE the bolts as Nien66 pointed out. Hope to start machining it this week, depends on how busy the CNC is. The machining itself is pretty easy, the fins will take some time. Going 5x deep with a 1/4 endmill will have to take it easy. Lexan is ordered and will be here later in the week.
P

Location
Sitting' on the dock o' The Bay...

Any particular reason for using Lexan (polycarbonate)? Acrylic allows more light to pass through. Polycarbonate is tougher, though. They're about the same as far as scratch resistance.
S

Toughness. This will be intended to be a work light. Ie, thrown in a truck, tractor, loader, getting knocked over, whatever.
D

Acrylic scratches so retarded easily Merely wiping it gently with a micro fiber cloth will put scratches on it.

I am doing a similar project with 2 housings holding 9 XML emillers each. Also it is vehicle mount. I am looking forward to seeing how yours turns out. I am going to use glass as my front lens.

One of a kind: Streamlight SL20 custom XM-L drop-in
2