Disassembly of some UltraFire batteries 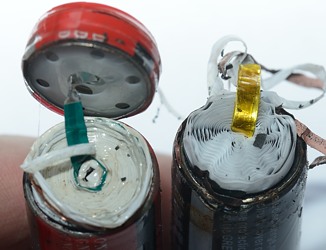 I wanted to check the construction of some more cheap batteries, this time it is 3 UltraFire batteries.

The specified capacity is not possible, but what does the battery contain? 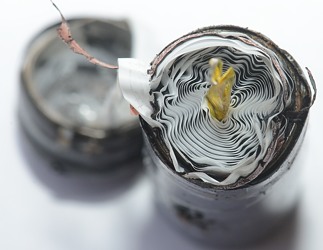 It looks real enough, this is the way a LiIon battery is made. 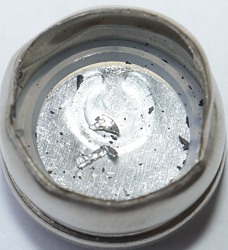 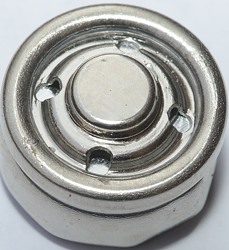 Lets look a bit closer on the top of the battery. 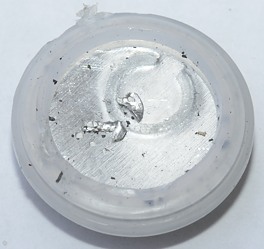 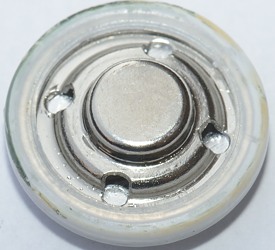 The plastic around the top is to isolate it from the can of the battery. 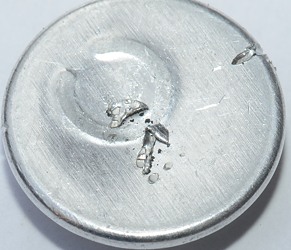 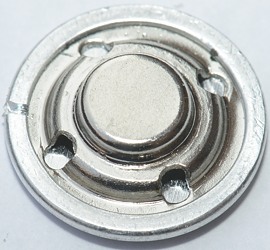 The metal foil below the button top is the pressure vent, but it does not contain any mechanishm to break the connection when the battery vents.
The button top is part of the top, not added later, this makes me suspect that this cell is special made for consumer useage and it is made very cheap without PTC and CID.

But on the battery it says it has protection and that the circuit board (PCB) will last for 10 years (Not the cell). 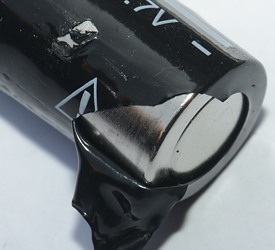 This type of protection is usual placed at the bottom of the cell, but there is no protection present here and as we saw above the top is also without protection.

During my battery test this cell failed completely, why? 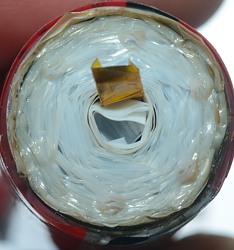 It looks like this cell is better filled than the above cell. 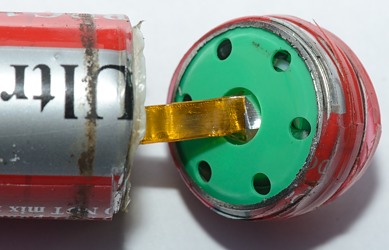 It looks like there is some more build into the top of this cell.

On this cell the button top is added, i.e. it is probably a regular LiIon cell. The washer around the button top hides the real vent holes, but I expect that it will easily blow away if the cell vents. 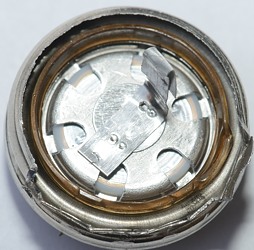 Here are the parts from the top, from left: Top with extra button top, PTC, CID, washer.
There is an X in the CID, this is where it breaks if the cell vents and when the X opens it will break the connection. 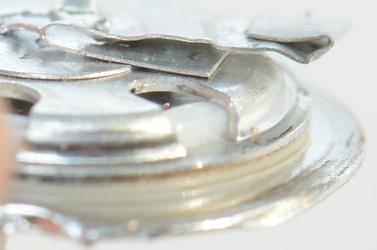 Between the two surfaces of the CID is a plastic washer (The white part).

Here it say the battery has over current and short circuit protection, that is partely correct when it has a PTC

And here it says it has a protection circuit, lets check the bottom. 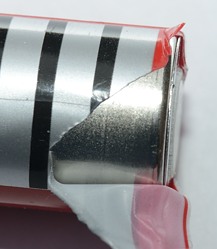 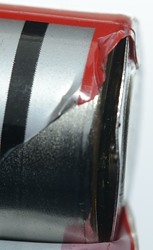 No trace of a protection circuit, but it looks like there is a metal plate on the bottom. Using a knife it can be removed. 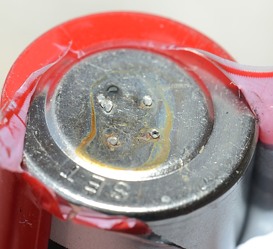 Looks like there is some corrosion on the bottom and 4 marks in a square. These marks shows that the cell is from a battery pack and with the corresion and a not working cell, it is probably from a used battery pack.

I decided to do one more of the 3000mAh cells, it is from the same order as the one above. 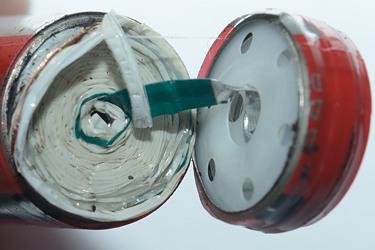 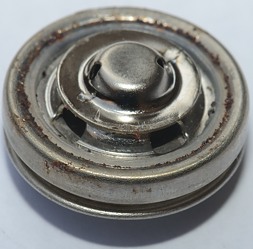 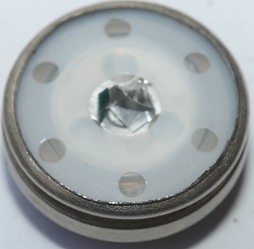 The cell does not look new.

It is again with a added button top.

Here is a PTC and probably also a CID, but with another construction than the above cell. 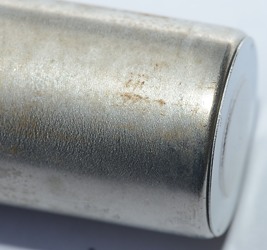 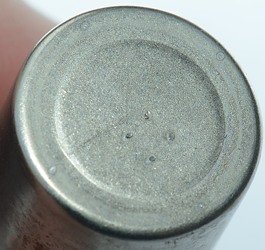 There is also the extra metal plate on the bottom, hiding the marks from usage in a battery pack.
The battery do also looks corroded.

Both types of UltraFires are bad cells. The 6000mAh is made to be a cheap/fake cell for consumer usage with minimal protection, the 3000mAh cell is made from old battery pack cells and when you buy multiple cell they may be different, even if they have the same wrapper.

At the top of every battery web page on ebay, there should be a link to this post. :thumbsup:

Thanks for this "revealing" information.

I have made it a sticky so it doesn't fall off the front page of this section.

SilverFox said:
I have made it a sticky so it doesn't fall off the front page of this section.
Click to expand...

PS: I will publish reviews of the cells.

Thanks HKJ for all the useful and fantastic work you do, for all of our benefit:thumbsup:
R

Another huge thanks for verifying the risks and warnings around this brand and other cheap, but dangerous cells.

Isn't there some sort consumer protection agency in the EU (and US) that have these taken off the market given their real danger?
S

HKJ said:
…….the 3000mAh cell is made from old battery pack cells and when you buy multiple cell they may be different, even if they have the same wrapper…………..
Click to expand...

Here is an interesting short article about these "recycled " batteries:

"…….. These recycling operations sort through many different electronics. One barrel is marked "18650 Batteries". If the battery can still hold a charge, it passes. Battery rewrapping assembly lines often associated with the *fire* brands then take these cells and put new PVC wrapping over them and sell them as if they were new. There have been Ebay and Amazon sellers doing just this - so remember to always buy 18650 batteries from a reputable source…………"
M

Thank you HKJ for performing this teardown and revealing what we all suspected. It saves me from attempting a teardown in here and setting fire to something

Well done! I've purchased UF cells in the past and found them lacking power for bright lights. Don't buy them anymore. Not worth the risk! Thanks for your work!

Mileage said:
As someone fairly new to these more exotic battery types please could someone share a link to reputable safe battaries so as to be able to avoid the dodgy fake brands

The best general advice is to stick to big name cells. Sony, Panasonic, LG, Sanyo, Samsung and the like are good. Stay away from cells whose names end in "fire."

edit: I forgot to mention that this does not apply to Surefire, who I'm sure use decent cells under their wrappers.
Last edited: Apr 13, 2015
Z

G. Scott H. said:
The best general advice is to stick to big name cells. Sony, Panasonic, LG, Sanyo, Samsung and the like are good. Stay away from cells whose names end in "fire."
Click to expand...

Now to toss a spanner into the works, one of us here ought to setup a battery business that uses authentic brand new cells from reputable manufacturers and labels them "TrueFire".
S

Some interesting info about Ultrafire:

The Ultrafire name has been in a legal battle for years while several factories battle to win legal control over it. Shenzhen is China's first and most successful special economic zone and the law is taken seriously there. However, with no one winner declared, it is a free-for-all, and anyone can print their own Ultrafire batteries without legal repercussions
That might all change in the first few days of 2015 when a decision is supposed to be reached. But for now we will have to wait.
How easy is it to make your own Ultrafire 18650 brand

A 18650 re-wrapping "factory" can be run efficiently with as little as six persons. Or you don't have to do it yourself - you can contact any number of OEM suppliers that will gladly do it for you. Ultrafire cells might be used, re-salvaged, or new. They might have correct specs, or exaggerated specs. It is usually the worse option in my experience.
How many different companies make Ultrafire 18650 batteries?

There are at least ten different companies producing them………….."

Mileage said:
As someone fairly new to these more exotic battery types please could someone share a link to reputable safe battaries so as to be able to avoid the dodgy fake brands

If u are living in the USA, do try Illumination supply or Mountain Electronic..
They are reputable sellers.
C

UltraFIre shrink wrap already sold on fasttech and similar sites, so you can make your own

As long they do not try to counterfeit the reputable brands.

zipplet said:
Now to toss a spanner into the works, one of us here ought to setup a battery business that uses authentic brand new cells from reputable manufacturers and labels them "TrueFire".
Click to expand...

How about "Nofire?" Or for added truth in advertising, "Lesslikelyfire?"

I also edited my post above. I totally forgot about Surefire, and I don't want to lump them in with the rest of the "fires."
Last edited: Apr 13, 2015
R

Excellent!! This should be required reading for all those unsuspecting people getting ready to click "add to cart" on Amazon or eBay.

It is truly amazing what companies will do just to make money. They endanger every one of us. Should be completely and totally illegal. They have no morals.
A

I've read the various "Fire" brands (FirePeak, UltraFire, TangsFire, HouseFire, ApartmentFire, etc.) are reclaimed laptop battery pack cells or factory rejects that fail spec in some way (not neccesarilly capacity). The most frightening part is that some of them have rated capacity (don't mix!).

They are very commonly conterfeited too. WaFat Technological which owns the brand has a blacklist on their web site and Amazon.com is at the top of the list.

I never bought one but I have one that came with a flashlight. I only use that cell alone and put the charger on by garage concrete floor with nothing within a couple feet
That flashlight was only bought because the LED head fits the end of my "executive size" expandable baton. One of the these days I will add a coin cell and some kind of switch mechanism to make it actually work