Submitted for consideration for the review forum:

The EagleTac T100C2 is, in its broadest generalization a souped up P100 series light. Electronically identical to the P100C2, at initial glance it is difficult to see beyond the extra bulk, however this light does offer enough individuality under closer inspection to clearly differentiate it into its own distinct entity.

As with the other EagleTac 100 series lights, quality knurling is the order of the day here. Enough of it to provide a grippy surface without becoming overly aggressive. As a matter of fact it appears very similar to the knurling common to several Nitecore branded lights. The result is an understated light without over the top machinework complexity. It makes its entrance as a no-nonsense duty light designed more as a professional tool than something to beautify a collection sitting on a shelf.

The EagleTac T100C2 takes the much praiseworthy regulation of the P100C2 and adds to it, most notably, a body with support for 18650 Li-ion rechargeable cells. This allows the end user complete customization as to their preferred power supply. One of my biggest concerns with flashlights is that when I push the button to turn it on, I want reliable output no matter what state the batteries are in. I want to be absolutely assured of what light level I am going to get every single time. The EagleTac T100C2 offers that no matter which battery type you decide to feed it.

The T100C2 uses the same Q5 bin Cree XP-E LED found in the P100 series lights. This time however the reflector has been retooled to accommodate the increased diameter of the lights head. This results in not only a tighter spot as expected, but also surprisingly it provides a broader transitional corona to the beam. The longer I use this torch, the more impressed I am with how beautiful the light it puts out is. This is very nearly enough for me to recant my previous position regarding the use of textured reflectors.

The T100C2 is the first EagleTac light to be given the removable Tactical Grip ring similar to offerings by Surefire and Fenix. This ring does accomplish it’s goal of providing solid retention and anti-roll features. It appears to be made from a high quality plastic that has been given a nice matte finish. This ring however ends up rather narrow and inflexible and therefor digs into your hand unnecessarily when using any grip other than the cigar grip. I would suggest that instead of plastic, some semi-rigid rubber would be used and the corners be rounded a little more to provide a more comfortable user experience. Personally I have decided to remove the ring for long term use.

As much as I profess the T100C2 to be more of a tool than a shelf decoration, it doesn’t hurt to have the finish continue to look good for as long as possible. The anodizing on the T100 appears to be of the same quality as that on the P100 Series before it so that makes long term observation a little easier. Those lights have been in my possession in regular use for a while now and have already begun to show considerable wear to the finish. None of the damage they have sustained over their use is anything but cosmetic and they continue to function as well as the day they shed their packaging, but quite a few wear spots have appeared, especially on the sharper corners of the knurling and bezel, where the anodizing is likely the thinnest. I personally don’t mind if a quality tool looks like it receives a lot of use, but a thick durable finish would better maintain the professional appearance that this light initially gives.

During my time thus far with my narrow sample set of this model, I did experience one minor operational defect. For a short time the low mode seemed to diminish to a very small portion of the threading making it rather difficult to obtain, especially in a hurry. briefly even it appeared to disappear entirely. Further inspection revealed that the spring loaded mode-selection ring inside the head of the light was sticking in the compressed position, severing electrical contact when it would normally be expanding into general mode. This was fixed with some careful reshaping and light lubrication to where it is back to operating like brand new. I just would hate to see a light like this succumb to simple issues that could be circumvented by tighter control in manufacturing.

I began my review of the T100C2 at the same time as the EagleTac M2XC4 and as such at first it seemed to hide in the shadows somewhat by comparison. It is a much simpler light destined for a completely different purpose. The longer I used this light however, the more I came to appreciate the quiet competence it exudes for it’s intended tasks. I am very pleased with the overall product and once again find myself impressed with EagleTac for producing such quality at a very reasonable price.

Provided for review by PTS-Flashlights
Last edited: May 24, 2009

And size comparison between them? Thanks.

I'll see what I can do about both. Dinner time now. Dark later...

I'm interested to see the larger transitional corona you mentioned vs the P100C2.

Just grabbed some beamshots, but I don't know if they show anything. I'll process them tomorrow and grab some comparisons in the morning sun (if it shows).

:twothumbs Another plesant read that I happily agree with.

This light is a true bargain that is so simple anyone can manage to pick it up and use it properly.
T

I'm curious how the output would be compared to a Malkoff M60. I've been thinking about getting another M60 +body, but if the Eagle Tac here performs as well, I'd be interested in saving some money and trying something new.

Also, since this light has the "standard" diameter, would it fit in a Surefire V70 holster like the 6P does? If it does, I think I'm getting one for sure.

I'd lean towards the Malkoff because I am very used to them but you would certainly not be making a bad choice by going with this one instead.

The T100C2 has more throw. The Malkoff has a more utility type beam.
Both are well regulated. Total output is really close.

I'd say it depends on your intended use because of the beam profiles. The T100C2 has decent spill but it cuts off more abruptly than the Malkoff's gradual fade. If you have a host standing by Malkoff's a very good and safe bet. If you are working from the ground up on your next one the price on the EagleTac's hard to ignore. The Malkoff would probably survive drops better, it's host however may be another story depending on what you use. Also at this time you only have one tint choice with the T100C2. That may or may not matter to you.

Just grabbed some quick and dirty pictures. Don't know if they really show what you are looking for... 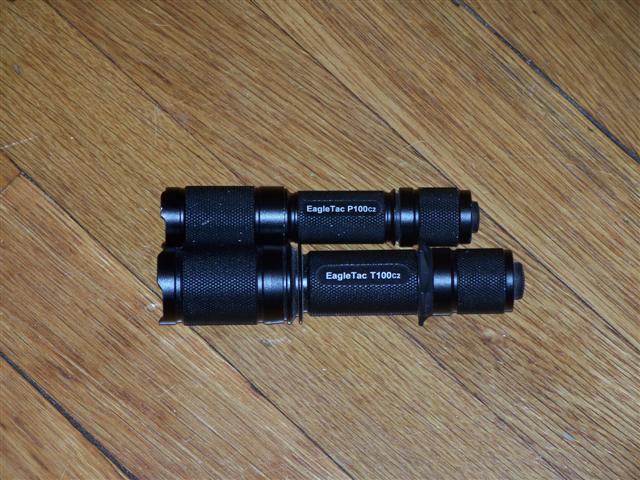 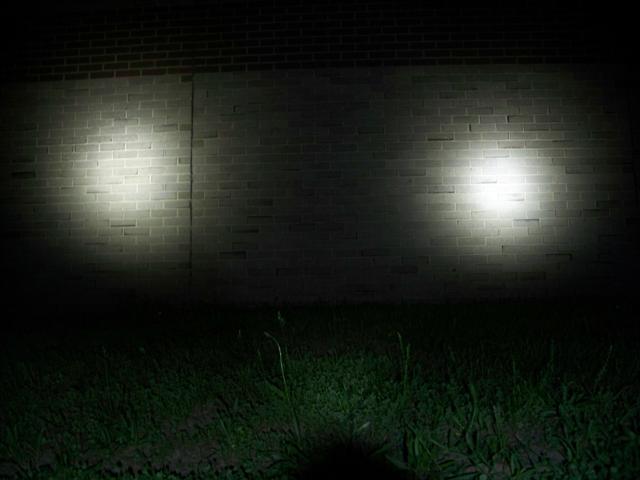 Wow !! It looks like the T Series have much more throw.
1

Great review!
And thanks for the beamshot,wow i thought the P100 had a tight beam but looking at the hotspots side by side i can clearly see that the T100 can throw a beam well over 200m.
Impressive..
Is the side spill the same as the P100?

Yeah, the T100 series definitely has a noticeably better capability for throw but I am quite surprised at how it doesn't really appear to affect short range stuff much. The spillbeams on both 100 series lights appear to me to be basically the same. I don't have a lightbox at all so I can't vouch for actual numbers, but the appearance is identical.
H

toasterlocker said:
Also, since this light has the "standard" diameter, would it fit in a Surefire V70 holster like the 6P does? If it does, I think I'm getting one for sure.
Click to expand...

toasterlocker said:
Also, since this light has the "standard" diameter, would it fit in a Surefire V70 holster like the 6P does? If it does, I think I'm getting one for sure.
Click to expand...

TL, the T100C2 does fit into the V70. I have been carrying it at work for over a week with no problems.
H

djblank87 said:
TL, the T100C2 does fit into the V70. I have been carrying it at work for over a week with no problems.
Click to expand...

Thanks. Does it work bezel up and bezel down, or only one way?

AardvarkSagus said:
Just grabbed some quick and dirty pictures. Don't know if they really show what you are looking for...

Thanks. Now I know I did the right thing, not buying one...
H

phantom23 said:
Thanks. Now I know I did the right thing, not buying one...
Click to expand...

"Size isn't everything" as they say!