bykfixer said:
- The OS is high/low/beacon. But, you can half press to get to any of the modes. I did not time it but after a couple of seconds it returns to high. 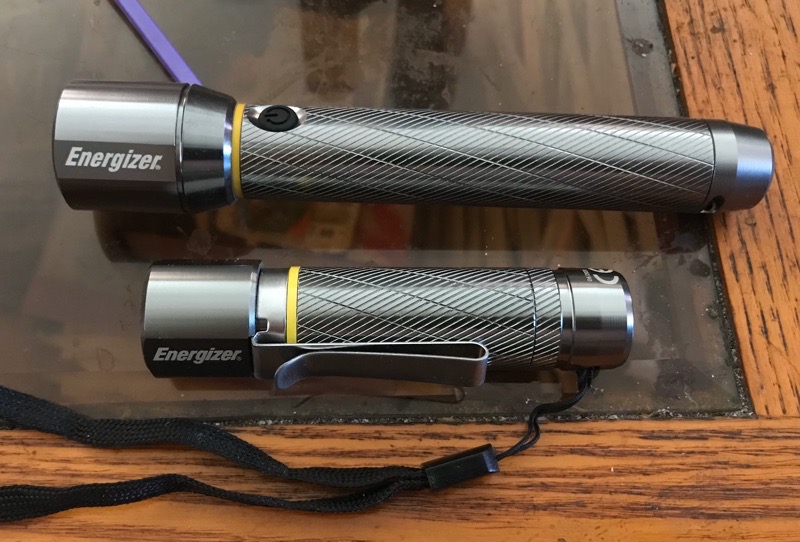 I like their design, they look pretty nice. Does the 2AA also start in high mode ? Also is the power button mechanical or electronic ?
F

The 1AA light definitely has a mechanical switch. It behaves like a forward clickie except that the difference between momentary on and clicked on is so small that it's very hard to reliably turn it on without clicking it on. Not at all like the forward clickies I'm accustomed to using on other lights.

I like the 1AA even though I wish it had a more standard switch. I do not really care for the 2AA because of the annoying UI and strange beam profile (even when you shift the output balance to the focused emitters, this light still doesn't really have any throw).

I find the 1aa version much more practical. I think the 2aa was meant to companion with the larger (3aa?) that touts 1300 lumens or some such thing where the 1aa kinda stands off to the side by itself.
V

I don't think anyone has mentioned the Convoy T2 yet. At $16, it's not the cheapest light out there, even for Convoy's lineup, but I'd still consider it a budget light.

- AA and 14500 compatibility, with low voltage protection.
- Good brightness, with a decent spot size and spill brightness for general use.
- Really good hand feel. The body is solid.
- It on the large side for 1xAA EDC, although I find the size ergonomically better in use than my smaller lights.
- 4 well-spaced modes. It does have mode memory, though. I'd prefer this kind of light always start on low.

This is the starter light I gave my older kid, and I'd recommend it to other casual users, too.
Z

Another vote for the Convoy S2+ here. I think it might be the most flashlight per dollar spent that I've gotten in a while.

If one did a budget light poll I predict that over the last, say 3-5 years the Convoy S2 would probably have garnered the most votes.

If they could be found at places like Best Buy, WalMart, Lowes etc I'd probably have one by now. Because that's where my assortment of budget lights have come from over the years. Drug stores, grocery stores, ma-n-pa hardware stores in tim-buk-too etc.
V

Agreed. Here in Ontario, the only lights in box stores are coast lights and those crappy zoom "security" lights. Neither of which I have any interest in
D

Man, I've been prowling around for 1xAA format lights lately; how did that Energizer Vision 130 light never come up?!

Probably because the Amazon search has become all but worthless. Whatever I type in just spams me with a bunch of generic junk copy-of-a-copy-of-a-copy that usually isn't very relevant to what I was trying to search for. I finally stumbled on it when searching (of all things) for the Olight that Monochrome mentioned earlier.

I looked at Energizer's site for the 1aa and "where to buy" but it only showed a few Ace stores ~20 miles away, and they all showed out of stock anyway.

I'm guessing maybe this light isn't sold in this region?? I did get the 6xAA Energizer light at Lowes a while back, so I would think they'd be carrying the 1xAA also.

Anyway, it's about 12$ at Amazon so if I don't see it on the shelf at Lowes or H.D. then I could always just order it.

This light's simplicity (and low cost!) appeals to me because all the other stuff seems to have 5(!) modes, or dual switches, and/or other stuff I don't want to deal with.
D

vicv said:
Agreed. Here in Ontario, the only lights in box stores are coast lights and those crappy zoom "security" lights. Neither of which I have any interest in
Click to expand...

Princess Auto has been a good source of cheap but good lights, although their selection seems to have narrowed in recent years. They have increasing selection of worklights some of which may have a flashlight function. They used to sell metal lights running off one or two 18650, but no longer; and they don't seem to sell the cells and chargers either. However they have periodic "special buys" including recently two-pack of 3AAA 5W LED "zoomies" which happen to take an 18650, for around $7.

Other mainstream OTC retailers around here include HD, Lowe's, Rona, Canadian Tire, and Home Hardware. Sometimes a good sale comes along, otherwise many products are overpriced and nothing special.

Last note, Home Hardware carries a nice little magnetic 3AAA flashlight/COB worklight plus red flashing warning light, usually around $13 which is not unreasonable; but I got one a while back on sale for $5. Product number is 5325-049, "Reactor" brand. Regrettably it does not take an 18650 but works with 18500, in my case LiFePO4 with lower voltage and somewhat reduced brightness as I appears to use direct drive.

Added a lanyard to the Coleman with slider switch. 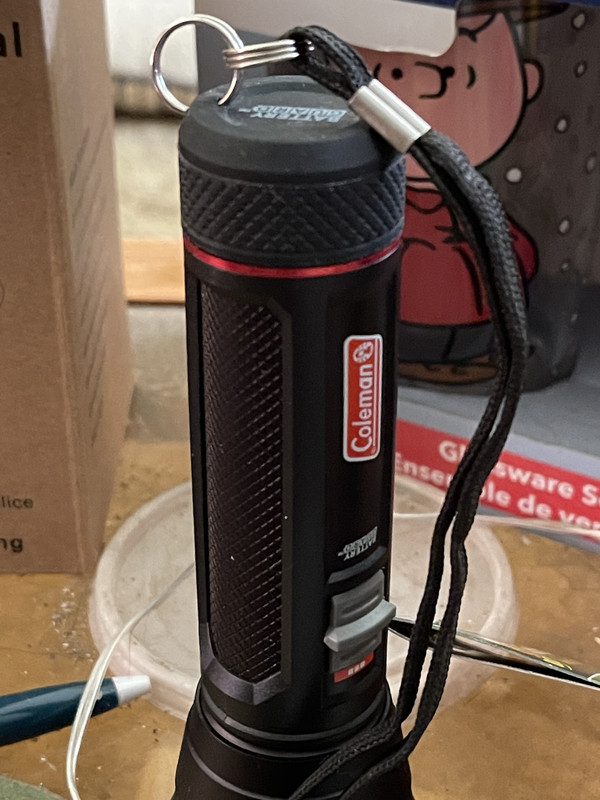 Well I went ahead and bought the Energizer 1xAA off of Amazon since I was already placing an order anyway. Only 12 dollars for this light, so I figured why not?

Actually this light ticks a lot of boxes for what I was looking for.

* 1xAA format for simplicity and pocket-sized, no messing around with multiple batteries
* Just one switch, in the tail, mechanical and not electronic battery-draining type (which the 6xAA version has, unfortunately)
* 2 or 3 modes (third mode is a flasher here, but if it's ~2 Hz like the 6xAA, that's actually more useful than strobe would be); No 5-modes-modesets-memory-hybrid memory-Anduril-firmware-ramping-BS stuff
* Reasonably throwy beam profile and not a pure flooder like most lights are now.
* Low mode is bright enough to be more useful to me, instead of only having a 5 lumen / max lumen setup like some lights.
* Terrific price! (No $300+ customs for me, thanks)
* Neutral white is a bonus!!

Anyways, I wish I could've found this in a local store, but neither Lowes nor H.D. had it listed on their websites, even though they sell the bigger brother versions from the same family.

I don't expect it'll replace my Quarks so long as they're still running, but the Energizer light should make a good general knock-around "hazardous duty" light that I won't mind too much if it gets trashed.

Got the Energizer light today. Not bad overall for 12 bucks. The emitter is off-center but it doesn't really affect the beam. The beam profile and color temp reminds me a lot of the AAA Sofirn C01s with the SST neutral LED and TIR optic. Very nice.

The bad news: after 10 minutes maybe, it subtly ramps down to the low level, or maybe a bit higher, 40 lumen or so. I know they do this to meet the advertised "4 hour" runtime, but that's kinda disappointing.

The other bad news is that when the Eneloop I was using got down to about 1 volt or less, the light wouldn't re-fire after being turned off. Had to wait till the voltage increased a little more. So, be warned. There was no obvious indication that the battery was depleted; I thought maybe the switch was acting flaky when I tried to change modes and it wouldn't come back on.
----

Now to get weird!!

The tail of the body is female threaded (recessed), so I started looking around to see if maybe another flashlight body would screw into it to allow multiple batteries (the threads are bare, so it only has to make contact, not screw all the way in).

A Fenix L1D would just go in one thread, as I think it's different pitch. I stuck two AA Eneloops in there and checked the current flow with a multimeter: About 0.4 amps! (vs ~ 1 amp with a single AA). Interesting. It appears to be regulating the extra voltage.

Then I tried THIS: 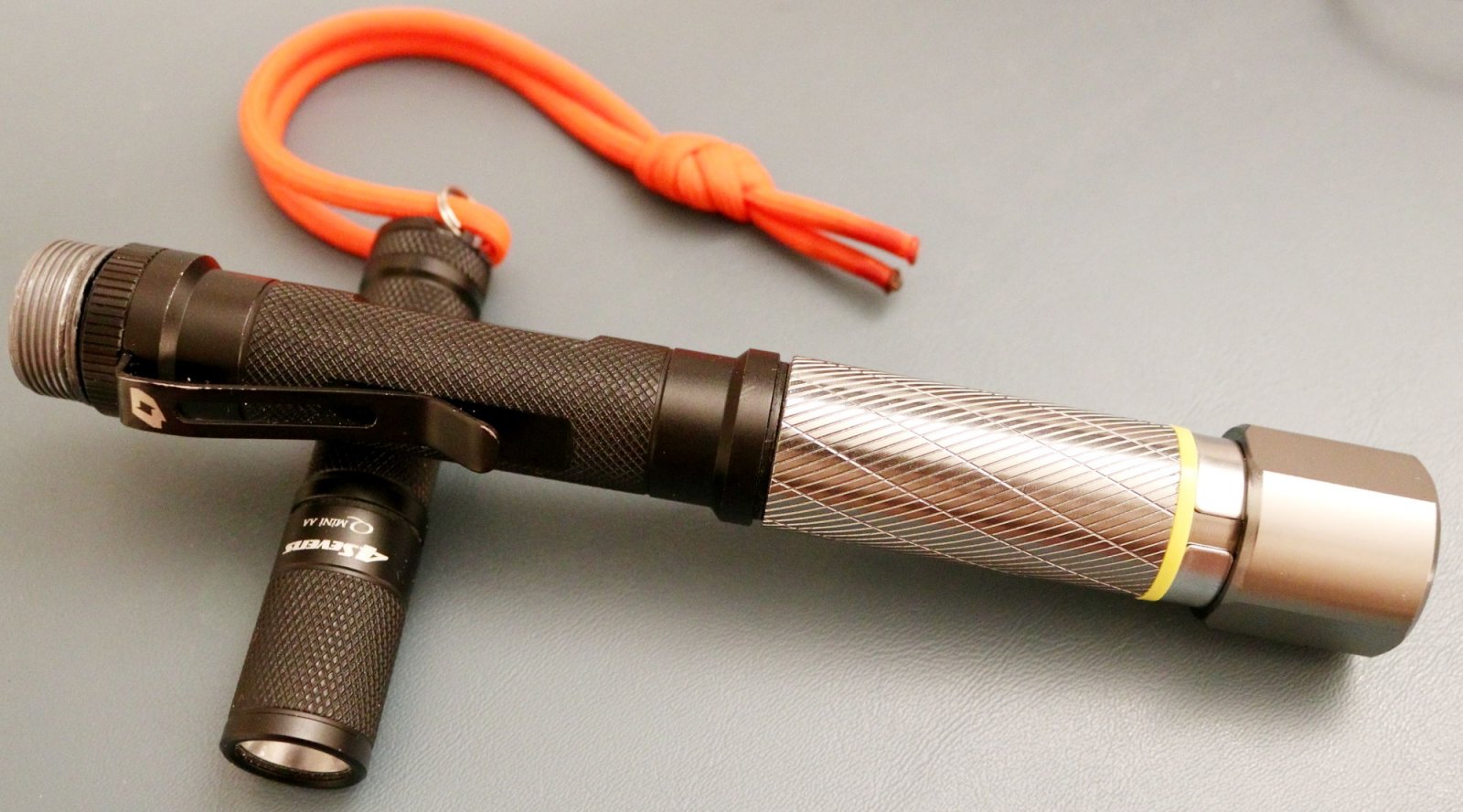 The Quark 2xAA body screwed all the way in, but the threads are loosey-goosey. Like they are same pitch but slightly different spacing. Now before I go on, I should mention that the tailcap on the Quark won't screw on because the three batteries protrude out too far. So this isn't actually functional, this is just for science!

I put in 3 AA and put the meter in series: About 1.3 to 1.4 amps! It seemed to be holding fairly steady there for a short time anyway. Maybe it was going direct drive since the amp draw was greater than before??

I don't remember if anyone has tried yet, but it looks like this light might work on a single Li-Ion cell. It would need to be protected though to avoid draining it down too far by accident. Try at your own risk however!! I don't have a Li-Ion in the AA size so I don't know if that'll fry it or not.

They are not high end lights by any means, but they are lightweight and mostly well designed, a great value at $3.50 per light. One will go in my glovebox and I might disassemble the other one just to see what's inside.

I have a few other lights on order that should be better but I won't favorite them until I actually get them .
J

Early in 2019, @jon_slider pointed me to the Sofirn C01, but by the time I was able to find one, I ended up with the C01S (several), which has become my all-time favorite , go-to "budget light."

Before that, it was the now defunct Fenix E01. I've been leery of any other light costing less or offered in stores and stick with the C01S as the least costly light/smallest form light I keep on hand for emergencies and daily pocket-carry/use. It's no search-light, but if it's dark, I can use it to get to one of my more expensive/brighter lights. So far, it has proven to be a great value.
D

For me the best headlamp is cheap, expendable, simple to operate, does not use custom or expensive cells, and does the job. My demands are light and sporadic. No need for exotic brands/names and high price tags here.

I just picked up a 2-pack of iGlow 3xAAA COB headlamps for $1.25 at Dollar Tree (Canada). No brightness spec'ed but good enough, flood pattern and neutral tint. Sturdy build, and strap is comfortable. It has usual high/low/flash modes. Draws about 0.4A on high mode from fresh zinc-carbons (supplied).

I think the wowtac w1 is awesome beginner EDC light
3

A 2nd light I'd bring up as a budget deal is the Sofirn S11c. Got 2 for the total cost of $20.75 w/batteries. Been using them daily with no issues of any kind. Great indoors light, an OK outdoors light. Has a ML & turbo shortcut from off. It is a zoomie which works as a pro & con. For normal uses around the house, walking the dog, taking out the trash, changing a fuse, etc it works fine. Added plus the magnetic tail cap frees up both hands when needed. Not a bragging right light but a useful one never the less. Cheap enough that everyone in the house could/should have their own
Share:
Facebook Twitter Reddit Pinterest Tumblr WhatsApp Email Share Link