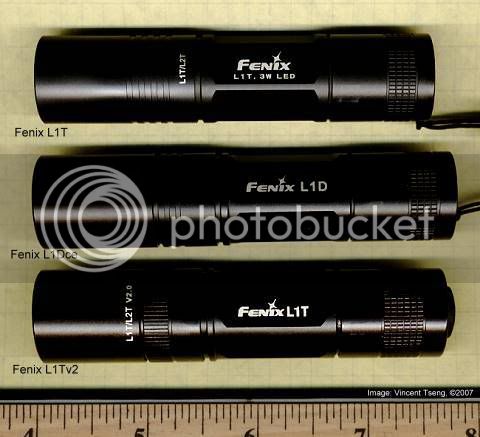 about the same size as the Fenix L1D-CE if you take in the protruding rubber-boot of the L1Tv2 - both these are longer and wider than the original Luxeon III based L1T.
Note that protruding rubber-boot for the tail-switch on the L1Tv2 -
this is the good news - that's a normal forward (or "tactical") clicky - with a momentary on by half-depression - then full depression to click fully on. Since all 3 are in the "L" series the tailcaps are fully interchangeable - but the heads, and bodies are only interchangeable between the L1D and L1Tv2 - the original L1T head and body (at the head) are a different size/thread.

The Fenix L1Tv2 is like the original Fenix L1T in operation - where there are only two brightness levels selected by twisting (ie: tightening or loosening) the head. 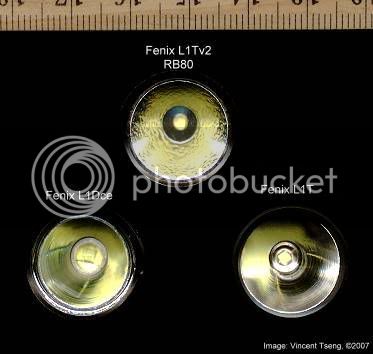 shows the LumiLEDs Rebel LED is smaller than the Cree XR-E and even the Luxeon III. The Rebel edition uses a reticulated/orange-peel reflector and the what looks like a black surround to the LED is actually mirror/silver finish. 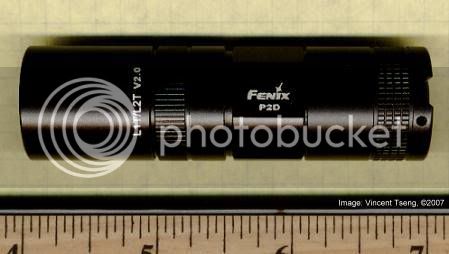 However because of the voltage spec'd range the L1/2 heads should not be used on the P3D body even if it will fit as 6V is too high.

Like many I really welcome the forward clicky - even if it seems that the tail-standing ability is lost.

However it is not all "good news" - for me the forward clicky is not as convenient/positive on the L1D/L2D - and I never thought I'd be saying a reverse clicky was "better".

Although I can get the forward clicky to work with the L1D/L2D - it is not as positive as the reverse clicky.

The operation on the Digital interface is to momentary switch (kind of tap - but needing more pressure/depression) to reach the wanted mode then fully depress to latch/click on.

However, this is easier said than done - as I find myself often jittering between release and momentary depression - probably because of the pressure needed for the momentary on - which sometimes misses/messes up switching between modes.

I'm sure more practice may make things better - but for me the forward clicky on the Digital series (L1D/L2D) is just not as positive or convenient as tapping the switch on the reverse clicky to change modes.

So maybe that's the reason Fenix held off introducing the forward clicky that the majority of CPF had been clamoring for almost from day 1 - and only used the new forward clicky on the L1Tv2 where one does not have to use the switch to change modes.


With that out of the way, how does the Fenix L1Tv2 RB80 perform?

vs. original Luxeon III based Fenix L1T both using NiMH on High - 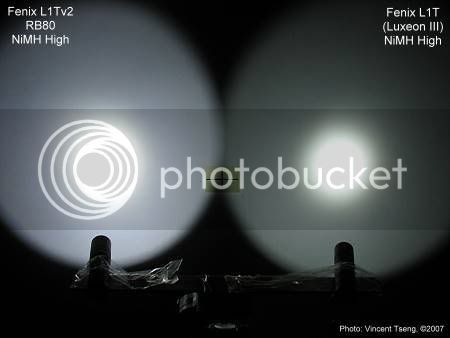 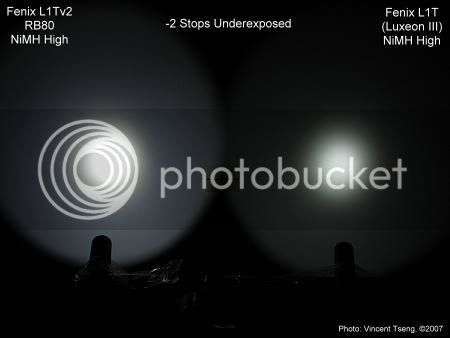 pretty obvious that the new Rebel edition L1Tv2 RB80 is brighter - and perhaps with slightly better/smoother beam characteristics due to the reticulated/orange-peel reflector? Both tints are good.

vs. original Luxeon III based Fenix L1T both using NiMH on Low - 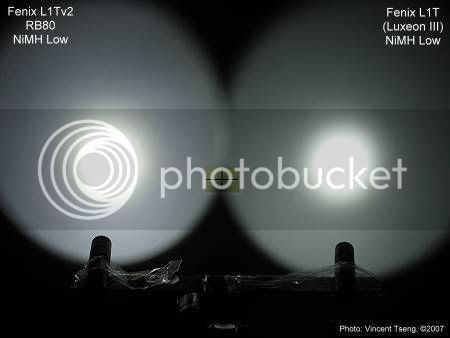 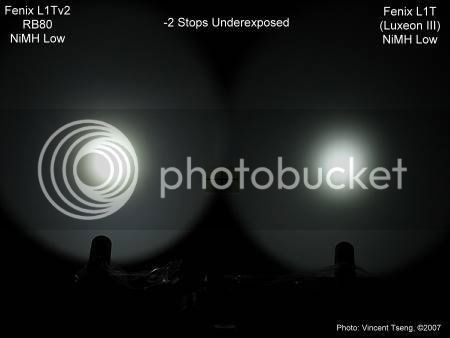 the Rebel edition L1Tv2 RB80 is a bit brighter - but that was the compalint about the original L1T - its low wasn't really low enough - I think people expressed they'd prefer a lower low with longer runtime.

OK, not really fair comparing a current LED with a previous generation - how about the Cree XR-E version -

High vs. Fenix L1D-CE on Turbo/max brightness both using NiMH - 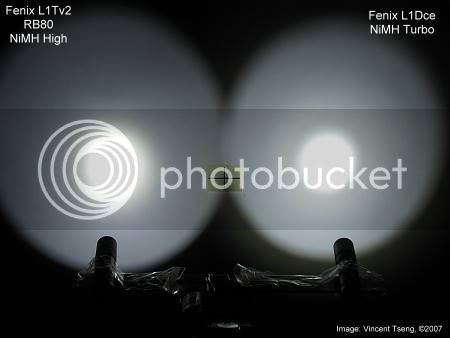 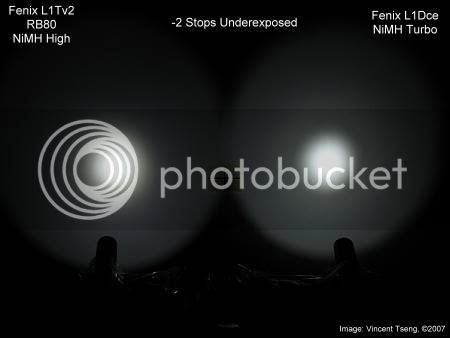 hard call to make - probably comparable in total output - but the Fenix L1D-CE has a smaller side-spill - therefore more concentrated beam - so shows better in the -2 Stops exposure.

vs. Fenix L1D-CE both on Low 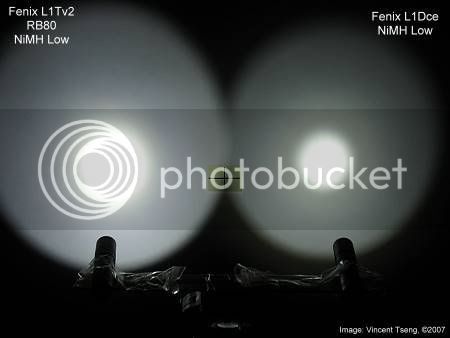 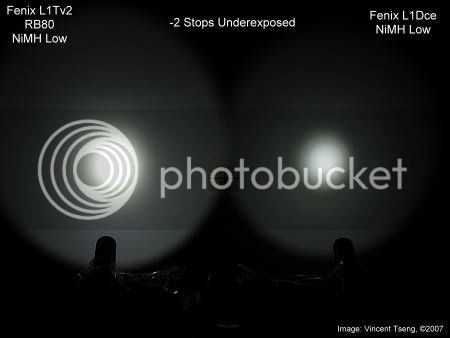 The low on the L1Dce is noticably lower than the low on the L1Tv2 RB80 - this is actually a good thing giving a more practical low level, and longer runtime on low.

Low vs. Fenix L1D-CE on Medium 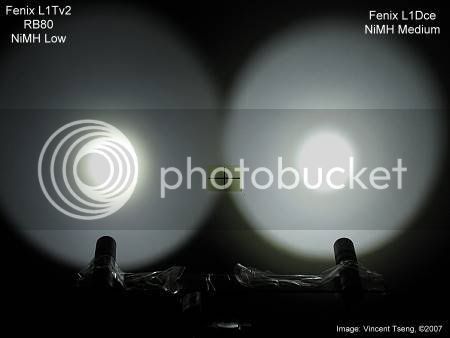 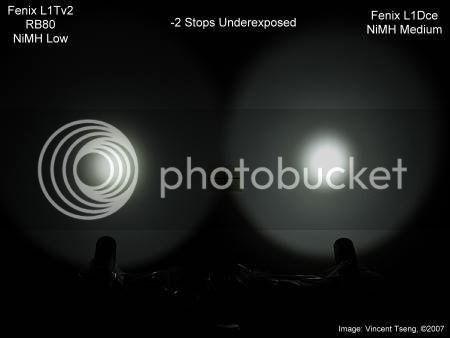 This Rebel edition L1Tv2 RB80 - may well be what a lot of people are looking for - a simpler 2 level light like the original L1T - updated to a higher efficiency Rebel LED. The forward clicky is a significant and welcome enhancement.
Last edited: Dec 11, 2007
W

Im not so happy with my forward clicky. The tailcap is a bit longer than the original one. I scratched my battery tube with it. Yours seems to fit well
M

I totally agree on the part that fenix xxD series UI works better with reverse clickies, LxT series UI are more natural for forward momentary clickies, tried some legos with my fenix lights and the characteristics of the momentary forward clicky make it very uncomfortable for changing levels and modes on the xxD series (for me at least).

I do like more my l1tv2 (than my l2drb100) for a couple of reasons, other than the different target uses planned for them: i can signal from a distance with the momentary and that doesnt changes modes, i can have total control of making my light blink with no hassles. The other reason is that the l2drb100 emitter has a very green tint, and the led or the reflector are very uncentered, the flat dish that fills the gap between the led dome and the reflector has a lot more space on one side than on the other .

I will ask 4sevens if i can send it back for a replacement/fix, but i have read on the dealers corner that he is swamped with orders and has recently moved his warehouse, so i will send him a mail later this week, and if its possible to change the light i have a friend that will buy some lights in his store so will take that opportunity and maybe he saves some shipping, if he thinks its reasonable to exchange the light (dont know his policies about returns).

I dont have more flashlights to compare with, my only decent ones are those 2 fenixes - l1tv2 / l2drb100, one for edc the other is maybe for camping or other uses that require more light, as it was originally intended for the house but they dont want to hassle with energy cell types and originally wanted to use rechargable nimhs, since l2d uses 2AAs i dont want the batteries to reverse charge, and it will happen since the light was supposed to be left for anyone to grab and survive with minimal maintenance (as opposed to now that i take care of both myself).

Thanks to Relojero!! (new member of CPF also), who had the generosity to send me an inova X02, i think this light will fit the bill for a dependable, quick grab family light perfectly:
runtime seems good, and uses 2 cr123s, although they are rarer and more expensive here, the shelf life will be longer and hassle free, not to mention that they seem to be tough built, of course all those are assumptions from reading reviews and posts, since the light will arrive soon, and i will post impressions and pictures of it.

Adding to the Rebel Alliance