I have seen a bunch of the same plastic flashlight mounts on various retailers' websites. which of these would be reliable for riding technical singletrack with,m say, two lights on my handlebars? i might have to find a creative way to fit one on my Giro Hex though. 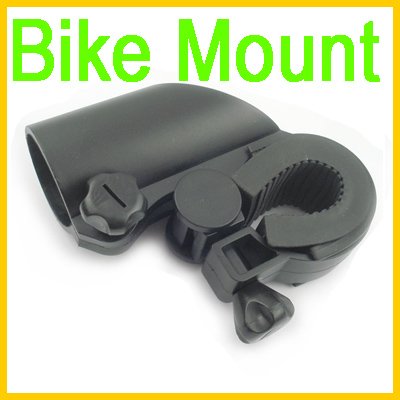 I recently picked up a pair of Fenix AF02's but am not overly impressed with the build quality. They seem a bit flimsy when tightened and the rotary joint has me worried as well about their longevity. From my experience with plastic parts on a mountain bike is they are inevitably going to break and I'm reluctant to mount my newly built custom moodoo 9P's in them and have them hit the pavement. I'm shuttering at the idea as I write this post. I'm very much interested as to what others here are using for flashlight mounts?
R

I use two metal hose claps to hold my lights on my handle bars.

<--Very fond of Twofish
i am using Cyclopblocks

I have a 5. Fenix pictures there. I have it mounted on my mountain bike and have used a variety of lights in it. Most of my riding has been road or trail, with a out a lot of jarring, and the light has been great on it. I have wrecked a few times and the light easily turned out of the way a prevented most of the damage to the light. I think if the lights had been in rigid holders they would have been hurt much more.
M

CPFBiology said:
<--Very fond of Twofish
i am using Cyclopblocks


I planned on picking up a couple of Twofish Cyclopblocks to mount my Lezyne Mini Pump since the plastic mounting bracket broke last year, I'll give them a trial ride on my bars with lights mounted. I guess it's time to break down and buy lanyards for my 9P's. Thanks for the input.

I never found anything that was very solid...
I now make them: http://www.rigidmount.com/torch_mount.html

I've got all of these.

The first two work quite well if the size of your bars and lights are just right. Most 18650 based lights are in the ballpark, but anything just a bit too big or small and they don't work at all. Neither mount has the ability to rotate right-left. The older version of #1 supported larger lights and only worked with standard bars. I used them with some narrow C-Cell lights that I have. The newer one in the picture has a narrower section for the light, but can go on a wider range of bar sizes. I have one of those also, but never used it. I use 2 #2's with Brinyte PD08's on a standard sized flat bar for my daily commute in winter. The ability to quickly remove the light from the mount is handy. #2 only works with normal size bars. I've never had an issue with the mount rotating up/down or with the light coming loose on either of these mounts. If you don't need left/right adjustment and only want to use 18650 size lights either of these is worth trying.

#3 appears to be junk to me. I opened the package handled them a bit, and never even bothered to mount them to any of my bikes. They just feel too flimsy to me to trust them for anything. I can't see them working.

#4 works well. I do get some bouncing over rough terrain when used on the bars. I have never lost a light with them, but have had them rotate around the bars (up/down). Using them on the helmet allows for less direct vibration to the light and works great. They support a wide range of light and bar sizes, but cannot swivel right-left. In addition to using them as a helmet mount, I use them as backup/loaner/temporary/AA light bar mounts. Very handy/flexible, but for the bars I prefer #1, #2 or #5 for cases where I'm willing to leave the mount on for long periods of time.

#5 Works very well in a wide variety of applications. I have one of the version shown and one of the updated model. They rattle, but hold the light firmly. They swivel left-right and support a range of light and bar sizes. I use these on my mountainbike when riding trails at night. If you have a bar that requires left/right adjustment, this is the only acceptable solution I've found.
M 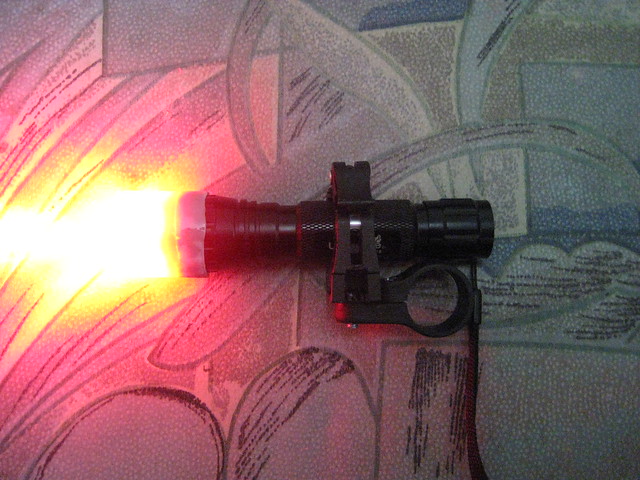 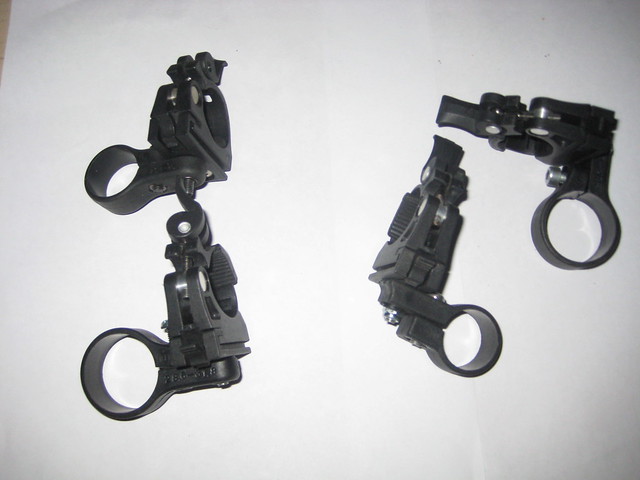 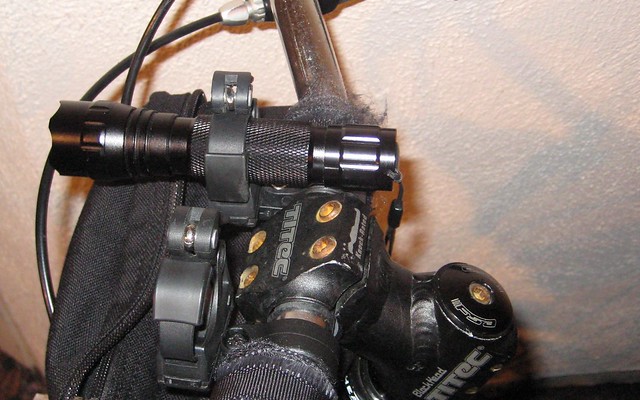 Been using twofish to hold my fenix on the helmet for years now with ZERO issues. Some helmets work better than others in this regard. I have a Giro Xen with the 90 degree twofish.

As far as handlebar mounting goes, I'll let my buddies barrow an extra light for night riding and they typically bar mount with the twofish successfullly. If you keep your bike clean- especially with pledge/armorall/bike polish it may not stay well but otherwise it tends to work OK. I suppose worst case is you replace the velcro strap with something more sustantial like a band clamp.

I have mine mounted via a DIY project on "cheap *******s"website.The pic only shows one mounted on the DIY mount(left,white mount) and the other one a store bought mount that broke within 2weeks...Now I have 2 matching mounts that are currently getting primed and painted to match the bike.These things were cheap and easy to make,and have even survived a very hard fall without the mounts or lights themselves coming out... 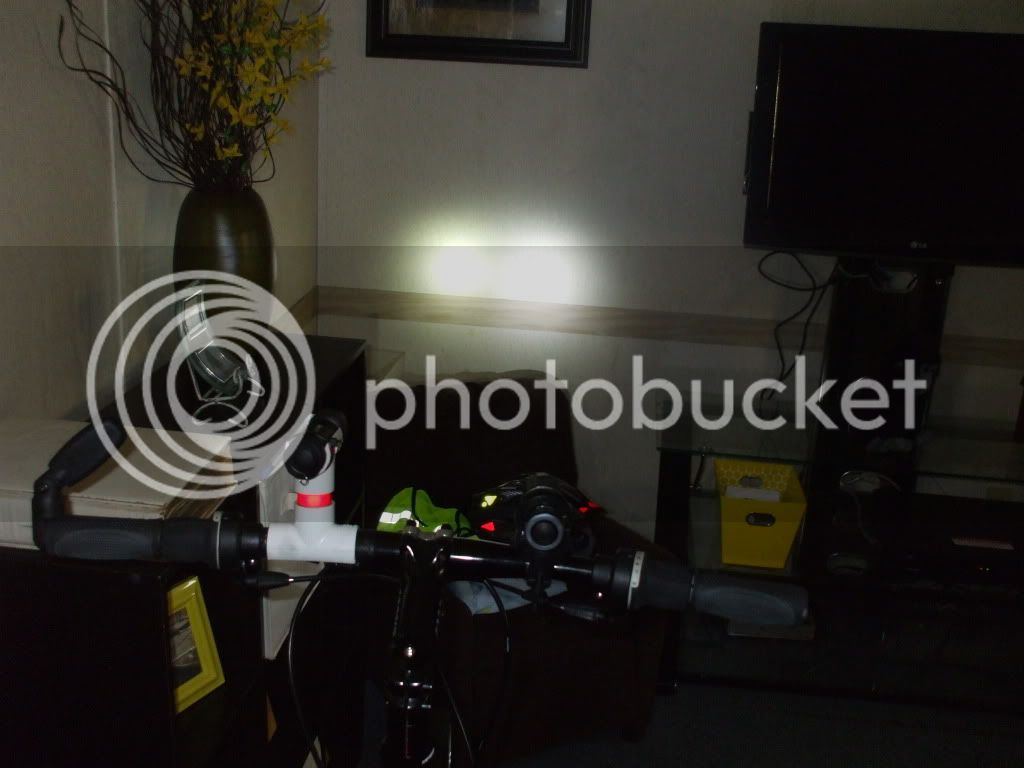 I was trying to think up ways to use this mount from DealExtreme. A family member actually came up with the best idea--to combine it with one of the Planet Bike mounts.

The 25mm clamp fits my UltraFire 18650 flashlights like a glove. Unfortunately, this is my rear, red light, so this mounting is better used only if you can clamp it around your seat post or are using it with a white light as a front light.

If you look closely, you'll see the plate under the thumb screw is not stock. It was made to clamp on to a picatinny rail that's larger than the width of the Planet Bike mount. So, I made a custom plate that reduces the clamped width to solve the problem. Also, you may be thinking, "What's stopping it from sliding right off?" Well, the bolt that the thumb nut tightens down on is not flush with the bottom of the flashlight mount. I used a round file to carve a channel into the top of the PB mount to clear the bolt and prevent the mount from sliding fore/aft. Finally, I put some rubber on either side of the bolt to prevent the flashlight from rocking when attached, as a slight air gap would be present otherwise.

It took a bit of work, and the custom plate is not something I want to mass produce, so I've ordered some other flashlight/laser mounts for guns that have a narrower clamp on the base. I'll report back on how well it works.

I had number one with MTE SF-15 and it was rock solid. But it was difficult to change batteries. The flashlight is short enough that I could not get a good grip on the body to unscrew the back cap. The front came unscrewed instead. So I got a number two and I have been happy with it. Very easy to remove the flashlight when I want to ride on the weekend. I recently got a Dashboard Genie (www.bdopcycling.com) that is AWESOME! The number 2 mount fits well.
Last edited: Jul 30, 2011

While I have not had the inevitable 'crash' test yet, this mount here from the same place I bought the lights has been holding up rather well. Although my riding has really mellowed out over the last few years.

I have a similar one that holds my I-Phone for GPS tracking of the rides. I have crash tested that one and it's held up fine. I am more worried about the phone flying off and landing face down in the leaves, plus I may not even notice it right away. The light mount has been very faithful and the price was pretty good.

Back in the 90's I had a rather expensive (for the times) wireless bike computer that calculated altitude gain and loss as well as temperature and the usual stuff. I had it for about 3 rides until I hit a log "funny" went over the bars, smacked it off the mount with my knee on my way over and it was lost forever. I looked through the leaves and dirt for about 40 minutes with no luck. The small black plastic box really blended in with the leaves & dirt.

I had the Fenix clamp and removed it due to the incessant rattling noise. I got a bunch of TwoFish clones off DX and have 4 lights mounted across my bars. I usually run one bright light and one set to dim so when the main light's battery hits the protection limit, I'm not left totally in the dark.

Just got one of the Cree "1200 lumen" bike lights off DX with the 4*18650 pack. When it eventually gets here, it will take the place of 1 of the lights. Can you ever have too much light when riding at night?
D

I've used the twofish for almost a year now with zero problems.
H

I have tried 1, 2, 4, and 5. Number 5 rattled, and it's too big and wide. I got rid of the rattling with cable ties. I no longer use it. Number 4, the two-fish blocks, works OK except sometimes it moves a bit out of position for big bumps. You can easily move it back in place. I use it on the front. I wouldn't use it in the rear. In the rear I use a hose clamp. The rest are garbage.


Nate said:
I never found anything that was very solid...
I now make them: http://www.rigidmount.com/torch_mount.html

Mar 1, 2008
Shadoxhurst
S
Z
Deal on flashlight mounts from China - has anybody tried these before?

B
show me your fork light mounts
2