I am looking for advise with a new light. I used to carry the Sunwayman V11R every day at work and loved it for the quick access to the highest settings and the ability for it to fit into my everyday carry. Unfortunately, it fell one day and no longer works. Since then, I tried several lights, but none have held a match up to the V11R. I am currently carrying the Acebeam TK16, but I hate it. The light defaults to medium so as a tactical edc, its not that great. The UI is kind of clunky, but it is bright. I need something that has the back button to use as a tactical light, but I want it to default to the highest setting for the startle factor, but it also be adjustable lower for practical use. I would like over 1000 lumen. I am currently looking at the Jetbeam RRT01 Raptor. The Olight Baton does not have a rear switch so that one is out. Are there any other 16340 or 18350 lights I should be looking at? Thanks for all your assistance.

IDK about your budget, but my favorite rear switch 16340 light is the D3Cvn by Vinh at Skylumen, but the stock Eagtac D3C versions aren't too bad either. I believe both will be able to provide you with what you are looking for in a 16340 format.

presently available lights with tailswitch and rotary dial include the RRT-01, and the HDS

each have pros and cons compared to the V11r

the RRT-01 has a fatter and heavier head.. and the control ring resistance may be less than on some V11R

the HDS is a larger, heavier, and considerably more expensive option. There is a large fanbase on this forum, and a lot of them get resold thru the classifieds..

HDS recently sold a bunch of new lights with a selection of different LEDs, so I expect we will see a lot used ones coming up. The HDS is potted, and will not break if it gets dropped.

your tactical needs could also be served by a light with a shortcut to maximum, there are many.. I suggest you look at the Noctigon KR4, which uses the Anduril UI.. It is extremely versatile, but complex. These lights are capable of brief outputs that are in the thousands of lumens.. 5 to 10 times brighter than a V11r, RRT-01, or HDS...

I personally prefer the simple UI of the V11r and RRT-01, over the more complex HDS and Anduril options...

Thank you all for the replies. I will probably opt for the RRT-01, but will look at the HDS. And this is why I love this forum. Helpful people shining light on the unilluminated.
M

I’m an industrial electrician and my newest worklight is the Stinger 2020, really like the selector switch UI, it has low medium high and strobe, a good grip, two switches, one on the back one on the side, and is durable as heck.

I’ve dropped it on the concrete from about 5-6 ft a couple times already and it barely has a scratch.

One notable issue that bothers some people is there is a small yellowish artifact in the center of the beam, not too sure why but a lot of new streamlights seem to have it. But it’s not noticeable unless you’re looking for it, and as someone who likes decent beam quality it still is pretty good.

Thank you, for the recommendation, but the stinger is way to big. My original stinger served me well until it finally died of old age, starting me on my quest for new lights. I just picked up a Fenix PD36 for everyday field use as it charges with USB-C, but this light will be carried while wearing slacks, so a big tac light is out, even one as small as the PD36 is out. So what I am looking for is a miniature version of the stinger or the PD35.
J

The Lumintop FWAA uses 14500 LiIon (AA size), and claims 1400 lumens, but they are in a flood beam from a triple LED arrangement, not focused tight from a single LED in a reflector

it is the smallest Anduril light I know of
I mention it for the wow factor (novelty toy),
though I hesitate to recommend it for serious tactical use
because it must be carried locked out, to prevent burning holes in your leg

to unlock requires 4 clicks.. I dont consider that a serious tactical config

some info by someone with direct experience:

Some other impressions:[/U]
* excellent tint and crit on the SST-20 version. This light includes some of the best SST-20s I've seen yet.
* Incredibly high output... but can't be sustained. This is an acceptable compromise for such a tiny light. It's the price paid for getting high output in tiny pocketable size. Want sustained high output? ... get a bigger light or run at lower power.
* The light is absolutely tiny. Consider the Eagtac D25C, a relatively small 16340/CR123 light. The FWAA is smaller! It's the same width as the D25C, but a few mm shorter.
Click to expand...

@rb765 - The tk17vn is a fantastic 18350 with a mechanical tail-clicky. It’s what I carry most of the time. It comes on in high then has 5 lower modes. It’s not the cheapest option, though

Here’s the setup I have:

If your TK16 is anything like my TK18, to get to Turbo you have to do a relatively slow double tap. Too fast and it doesn't register it. The slow Turbo double click also complicates matters if you use the on-off technique that some do with flashlights that have momentary.

I recently purchased a Fenix LD30 (it has momentary). Although it has a mode memory, it is easy enough to keep it on the high or Turbo setting. The side switch does not work when the light is off so you shouldn't have to worry about it switching modes in your pocket. The Turbo is advertised as 1600, and the high at 800. I keep it on high, and added some DC-fix for a slightly larger hotspot and spill. It's barely bigger than my SL Macrostream 14500, but weighs more (as it is an 18650). Other than not having a moonlight mode, for me, this seems like a great "do-it-all" pocket light. It's also smaller than my SF EDCL1, which is a single CR123 flashlight.

Another option is for a 14500 light. I use a Streamlight Macrostream for work duty (500 lumen Hi, 50 Lo, tail switch) and was looking at one of the Klarius 14500 flashlights that advertises 1000 lumen (tail mode button next to tailswitch). The 14500 lights are sometimes thinner and a hair longer than the 16340 ones and have similar capacity. The only reason I haven't picked up the Klarus is that I'm afraid I will activate it with the mode tailswitch when in pocket.

There are a few nice options in the 500 lumen range. The SF EDCL1, Lumen Factory CR123/16340 parts, etc. The EDCL1 has similar brightness and beam profile as the LF, but the SF's spill is larger. However, the LF head is noticeably thinner (since this is for pocket carry), and is spec'ed to work with either CR132 or 16340's. Malkoff also has some options.

Eagletac offers some 18350 lights that advertise at over 1000 lumen, but you have to check their spec sheet for "momentary" or "forward clicky" as some are reverse clicky, some are twist head for on, etc. I like the UI on their Tactical D series line, but they are 18650's and 2xAA's. The non-tactical D-series are reverse clicky IIRC.

I have no experience with Jetbeam, but might pick one up in the future.
Last edited: Jun 24, 2021
R

Olight Warrior Mini or Warrior Mini 2, both have tail switch to direct turbo and both over 1500 lumens and as low as 1 lumen.

Side switch to change outputs and turn off/on, again the tail switch can direct access to turbo. My favorite carry lights are below from the Baton 2 to the just released a couple days ago Warrior Mini 2.

The Warrior Mini's are the only two or the four with tail switch and side switch combo, the Baton II and Baton Pro are side switch only. All are magnetic charged 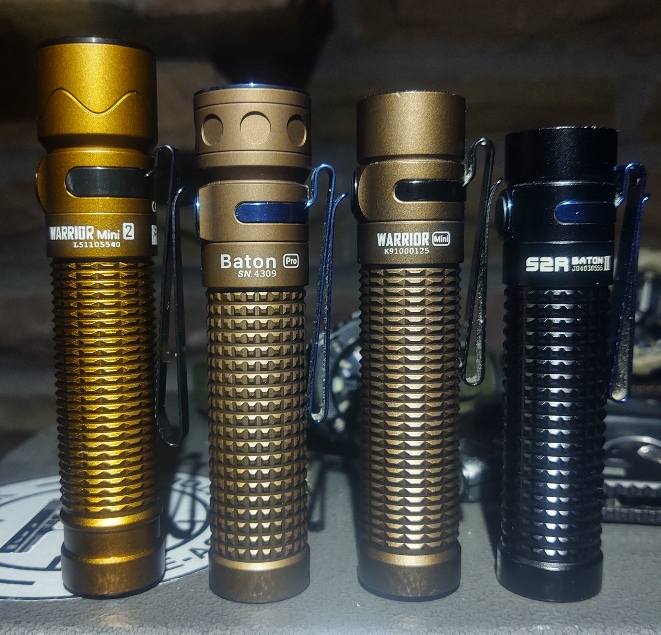