The Klarus XT11GT was send to me for an honest review by Fasttech. I make no commission from links or sales. Product page link. Coupon code “MAP” for nicer price.


This review is of the 2nd generation of this flashlight. The original version has a XHP35 HI (instead of HD) emitter, which had more throw (40,000cd), but less lumens (1600lm). Only the 2nd version should be available to purchase.


The Klarus XT11GT is an 18650 battery based flashlight, with a Cree XHP35 HD D4 LED. It has a wider head than the tube, allowing for approximately x2 to x3 more peak beam intensity/candela than most 18650 tube lights. The head, at 34.9mm diameter is compatible with all commercial light painting connectors that I’m aware of - Light Painting Brushes Universal Connector, Herramientas Cone, and Liteblades KYO.


The XT11GT has three switches, a side switch near the head, and two tail switches. This allows for mode memory functionality that is not available on the otherwise excellent XT2CR. The XT11GT is also compatible with the TRS1 remote pressure switch. The user interface is explained in the next section.


Build quality is very good, as is expected from Klarus. The XT11GT has a crenelated bezel, and thankfully this can be removed. The light includes a pocket clip, and tactical/anti-roll ring. The light also comes with a holster, 18650 battery, micro USB cable, lanyard, and spare O-ring. 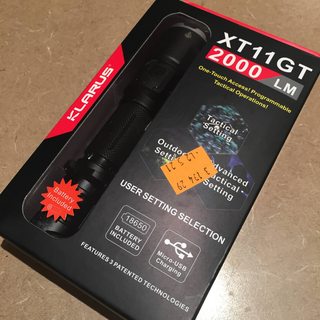 The XT11GT has micro USB recharging, and also comes with an included 18650 battery. The micro USB port is protected by a rubber plug, which allows to the light to maintain it’s IPX8 waterproofing. The included battery is a 3100mAh high drain battery with added protection circuit. The USB recharging and included battery makes it very attractive to the consumer market. This is useful for those who do not own li-ion chargers, or for example don’t want to a bring a charger when travelling (I’ve even used it to charge 18650 batteries from other flashlights with no internal charging) . I tested the charger to terminate charge at 3.16V, which is at the lower end of acceptable. A crude battery charge indicator light (<30%, 30-70%, >70%) in the side switch can be useful so that you know when to recharge the battery.


The battery tube has a spring at both end which means that it is compatible with flat, raised, or button top; unprotected or protected. Be aware that only high drain (able to handle 12A current) batteries will work in this light. I successfully tested this light with the included Klarus 3100mAh protected battery and a Sony VTC6 unprotected battery. 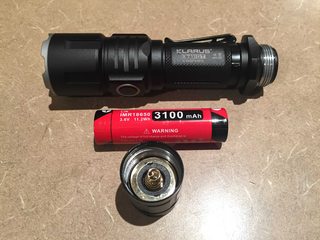 
The Klarus XT11GT has three mode groups - Tactical Setting, Outdoor Setting, and Advanced Tactical Setting. There are also three switches - the primary (button) and mode (paddle) switches at the tail, and a side switch.
Due to the considerable options in the user interface, I won’t cover every possible user interface option, but will provide an overview of what can be done in each of these mode groups.


Advanced Tactical Setting (3) only allows for turbo and strobe modes, with momentary for both.


To move between modes, the user needs to hold down the side switch for 10 secs, and then use the mode switch to change between modes - the light flashes out the mode number.


The user interface is quite complex, and a read of the manual and a play is definitely required before using it for the first time! However, the user interface covers most requirements that a light painter requires. The major omission is lack of momentary functionality on medium and high modes - this is available on the Nitecore P10GT, Thorfire TK15S, Thrunite TC12v2, and Wowtac A1S. It is also a little bit fiddly to exit single frequency strobe back to turbo on the fly (you need to hold, release, then click again). Due to the wide head and location of the side switch, the side switch is easily accessible when using the Light Painting Brushes Universal Connector, which is a bonus.


The Klarus TRS1 remote tail switch (optional extra) allows for extra flexibility in control as it can be placed on the outside of light painting connectors. This is very useful for changing between modes on the fly during light painting scenes. The TRS1 can also be used on some other XT series lights such as the XT12S and XT2CR.


Due to the large head, Cree XHP35 HD emitter, and smooth reflector, the beam is more throwy than most compact 18650 tube lights, with a relatively intense hotspot (25,000cd). However, the beam is still reasonably balanced between flood and throw, and the beam angle is even slightly wider than it’s peers. 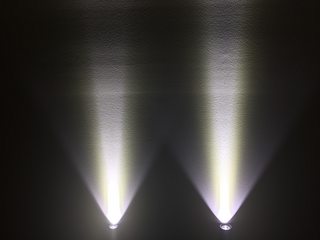 
The initial lumen output is impressive for the light’s size, and was tested at 1940lm at 30secs. This can provide a 1 stop photographic advantage compared to 800-1200lm 18650 flashlights, making this a great light to use in relatively high ambient light conditions (e.g. under street lamps). As a consequence of the heat produced, the XT11GT starts stepping down from maximum output after 90secs. This is much better than most other 1500lm+ 18650 flashlights suitable for light painting, but most 800-1200lm 18650 flashlights can maintain maximum output for at least 90 more seconds. The light’s ITS Temperature Control adjusts the output to 970lm by 3 minutes, and 750lm by 9 minutes where the light stabilises - this is pretty impressive for a light of its size! Lower modes of 400lm, 100lm, and 10lm should be used for for when constant output is required. There is no true moonlight or firefly mode.


The Cree XHP35 HD D4 emitter is cool white (around 6000k). The hotspot has a slight yellow tint, and the spill beam has a slight blue tint. The colour rending index (CRI) is in the low 70s, good enough for most purposes, but nothing outstanding. I would like to see this light available in neutral white as well.


Despite claims of a constant current driver, the XT11GT has visible Pulse Width Modulation (PWM) on low (10lm) and medium (100lm) modes. This creates a stuttering effect, most noticeable on the low (10lm) mode which can be used with artistic flare by light painters. This is not a good feature for non-light painters who generally don’t like PWM. As previously mentioned, it is possible to have a single frequency strobe (whilst holding down mode switch) or dual frequency strobe (when mode switch is released). There is also an SOS mode for people who can’t find their way home. 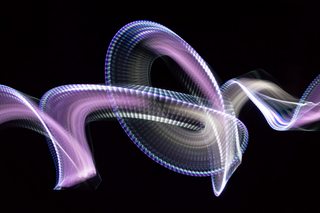 
It is obvious why the Klarus XT11GT is popular. The light has a wide range of features that include high output, mode memory, single or dual frequency strobes. Lack of momentary in medium and high modes is an omission, as is lack of neutral white option. Included 18650 battery, and internal USB charging also make this flashlight a great choice for consumers. It could be described as the “swiss army knife” of flashlights. 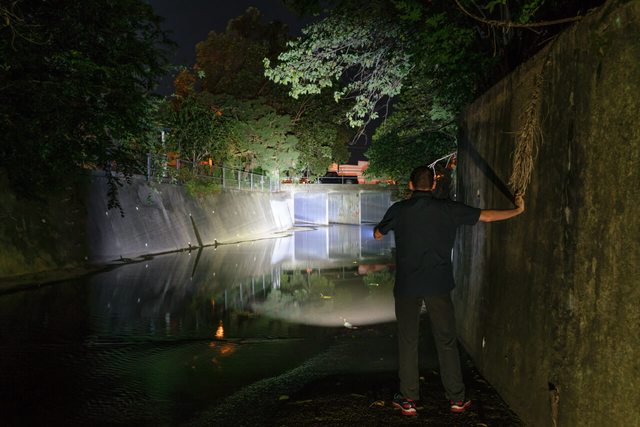 I've had this light for a while and really like it. The only complaint I have is that paddle on the tail cap. I carry the light clipped inside my pants pocket and every time I bend over or stoop down the paddle gets pressed and the light goes on. Do you think I would damage the light if I removed that paddle?
Share:
Facebook Twitter Reddit Pinterest Tumblr WhatsApp Email Share Link