I've always wanted a flashlight that performs the way Hollywood's flashlights work. They go investigate a dark basement and whip out a tiny key-chain light that has a beam as strong as the Bat-Signal. Obviously, this is in part due to movie-magic but as flashlight tech improves these High-output small profile lights are beginning to match Hollywood.

There have been several shows/films that have used lights in them that intrigued me. I'll just list a few here and let others comment on ones that they remember. It would also be nice if some more senior flashaholics could throw in on what they think the modern day equivalent to that light would be. (Also, this thread is not about if the movie/show itself is any good. )

Tron Legacy: Sam investigates the old arcade with a smaller-than-palm sized flashlight. When he sets it down on the computer at the end of the scene it is all black and about 1 in diameter and 2 in length. (The simplicity of the design makes me thing of some of the HDS pictures Ive seen on here.)

X-Files: Their flashlights were decades ahead of their time. I remember scenes where their handhelds rivaled helicopter searchlights.

Pandorum: Sci-Fi film wherein main character has an extremely small handheld light capable of a strong beam. When he holds the light it is so small that it is encapsulated by his hand as if the beam were merely coming out of his fist.
Last edited by a moderator: Oct 7, 2011

z_SecretStash said:
Tron Legacy: Sam investigates the old arcade with a smaller-than-palm sized flashlight. When he sets it down on the computer at the end of the scene it is all black and about 1 in diameter and 2 in length.
Click to expand...

It's a 4Sevens Quark 123 regular without clip
P

No way 4Sevens....are you serious or are you joking?

I miss Hotlanta. I used to live there and feel that it would be a good city to live in again.

The movie Sanctum was basically a feature-length advertisement for Petzl headlamps and climbing gear. Petzl pretty much made the same claim in their Tweet. :laughing:

We should probably have a post with links to the previous parts of this mammoth thread for continuity...
M

Here are the images I snapped
http://imgur.com/a/25h0q
W

Matrix0191 said:
I was wondering If someone could identify this flashlight from a episode of fringe

Here are the images I snapped
http://imgur.com/a/25h0q
Click to expand...

Size15's said:
We should probably have a post with links to the previous parts of this mammoth thread for continuity...
Click to expand...

In a very recent episode, Jay uses a 3D Maglite to investigate possible prowlers in a development home belonging to a client. Turns out a couple of satanists were getting ready to conduct a ceremony. The girl whom they planned to use in the ceremony was a willing partcipant. The two guys tried to run. But Jay and his team caught them. Case closed.
U

One Flashlight you'll never see on Ghost Hunters is the Fenix TK35.......

It's awesome that you brought up the x-files, it's the first show I thought of when I saw the title of this thread. While I agree with you for the most part, some of their lights were total dogs. I remember saying something like, "Aren't you glad that flashlights have improved so much since the 90's?" I expected a blank stare from my wife, but she said something to the effect of "No kidding, honey. Your flashlights are awesome and so bright and it really turns me on!"

Ok, maybe not that good, but she is definitely starting to come around.

In the first few seasons of the show, I think I remember them using a few incandescent mags, with the dim yellow/orange beam. Then they got the ones with the lens that kind of threads over the head of the light, causing the whole head to light up. I'd like to get one of those just for the cool factor. They had what I'm assuming must have been HID searchlights in the episode when they found that the underground cable run by the military had caused damage to the inner ear of several locals and animals. If they didn't head west at increasing rates of speed their ear would explode like a mini bomb and blow the side of their head out.

What an awesome show. Anyone know what the lights with the illuminating heads were?

anyone know what light this is in stargate universe? yellow with a cut away piece on the side of the bezel..

Image tags removed see Rule #3 Do not Hot Link images. Please host on an image site, Imageshack or similar and repost – Thanks Norm
Last edited by a moderator: Jan 23, 2015

I recently re-acquainted myself with a film I used to love when I was a boy (Looooong time ago!). It is William Wyler's "How to Steal a Million" starring Peter O'Toole and Audrey Hepburn. I'm sure most of you reading over a certain age - maybe about forty? - will remember it for pretty much the same reasons. Basically Peter O'Toole plays a burglar enlisted by Art Forger's daughter, Hepburn (never lovelier IMHO), to steal back her Father's forged statue from the museum before the insurers get a chance to examine it and find out the forgery.

Lots of ingenuity ensues and has furnished me with a lifelong love of Flashlights and magnets (You have to see it ).

Here are some screen grabs. 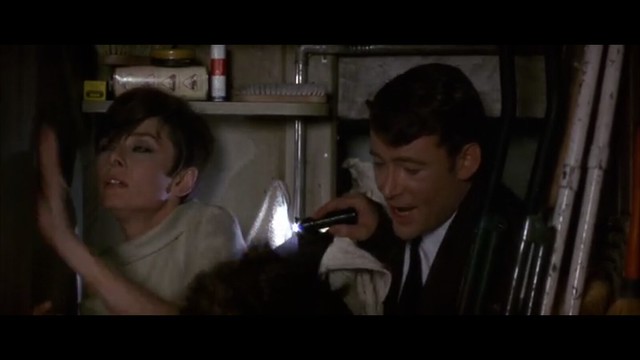 The scene has them both locked in a cupboard at the museum. Very cramped, but this small black torch he produces from a pocket, stays on bright and white for a long time - drama time of hours. Certainly to my child mind, I had never seen something so small and bright like that. My dim orange bulbed torches that I had were very inferior in comparison. 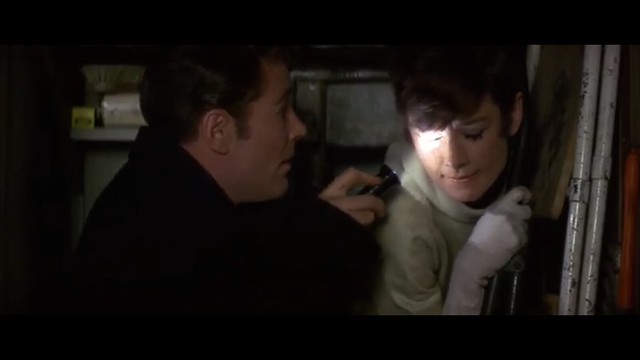 You really shouldn't shine a bright light like that into a beautiful ladies face, Peter! 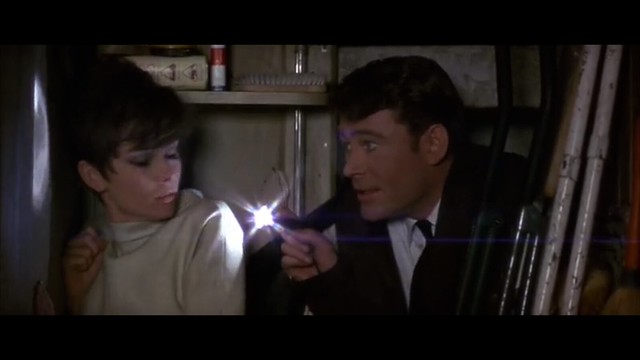 Sadly my adult eyes now see what my childish ones couldn't, and my logic also confirms my suspicions. I had never seen such a light because they didn't exist in those days. The light is clearly a metal tube with a bright bulb - probably a car headlamp bulb - made to look like an ordinary torch. you can even see the flex going down his arm. 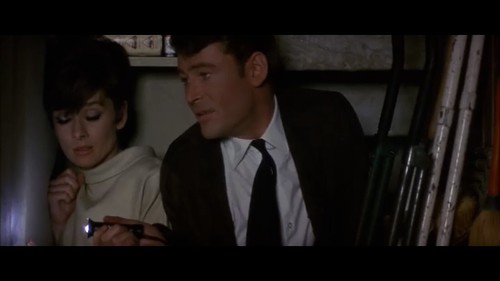 Here's a better shot of the flex.

Just like my Surefire 6P round body with Malkoff M61 - which it seriously resembles!

The film is wonderful in every literal sense of the word. Seek it out.

pounder said:
anyone know what light this is in stargate universe? yellow with a cut away piece on the side of the bezel..
http://www.gateworld.net/news/wp-content/uploads/2011/03/sgu_213_wray.jpg

Image tags removed see Rule #3 Do not Hot Link images. Please host on an image site, Imageshack or similar and repost – Thanks Norm
Click to expand...

onetrickpony said:
... Anyone know what the lights with the illuminating heads were?
Click to expand...

I believe they were made by Tekna.

Numerous flashlights used by the young folks as they inspect the decaying hospital that they're stuck in. Recognizable among them are a black 3D Maglite, 4AAA Energizer double barrel flashlight with blue body and a larger version (C or D-cell) with silver body.

I just saw the movie Insidious, and at one point the guy goes downstairs to investigate some knocking, and he opens a drawer and pulls out an SF M6 Guardian. What I don't get, is why later on, he goes around turning on all the lights in the house looking for an intruder, instead of grabbing the M6. Then even later in the movie, he uses a kid's fluorescent lantern to see in the creepy darkness, when he knows he has SF awesomeness just sitting in a drawer by the front door. :shrug:

Movie 'Paul'.
2 Limey geeks saw an accident in front of them and decided to investigate.
The 'Men In Black' under the command of the not so mysterious lady boss used hand held flashlights when they got to the scene.
D

I remember seeing the icon 2AA on the show call "Storage War". The most hated guy (Dave) was using it.

S
Flashlights in TV and Movies

Y
Can you name the flashlights used in movies/TV shows?