I've been needing to update this OP for a long time as the design has constantly been changing since we started using our own CNC machinery (quicker to prototype new ideas). So here is the current offering. First a pic of the 3 lights - The Lumenite 18650, Tiny Nugget 18650, and Tiny Nugget 18350 from left to right: 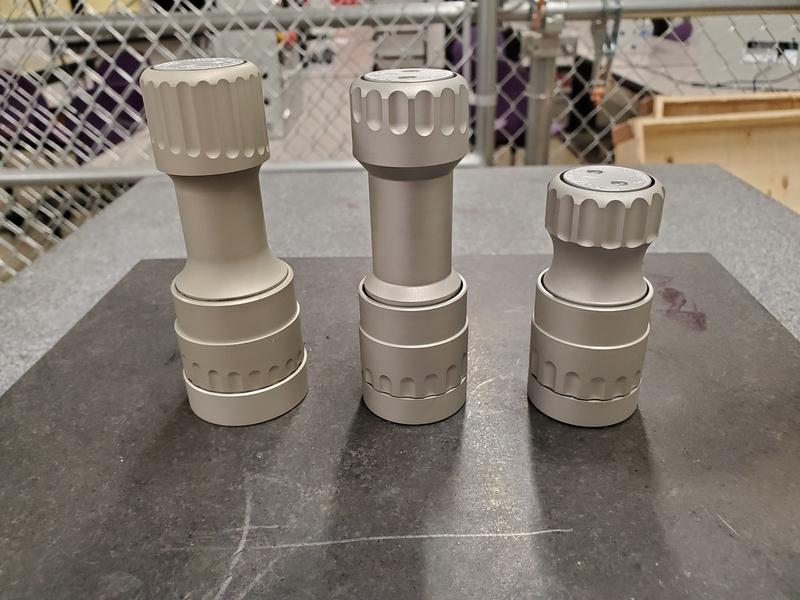 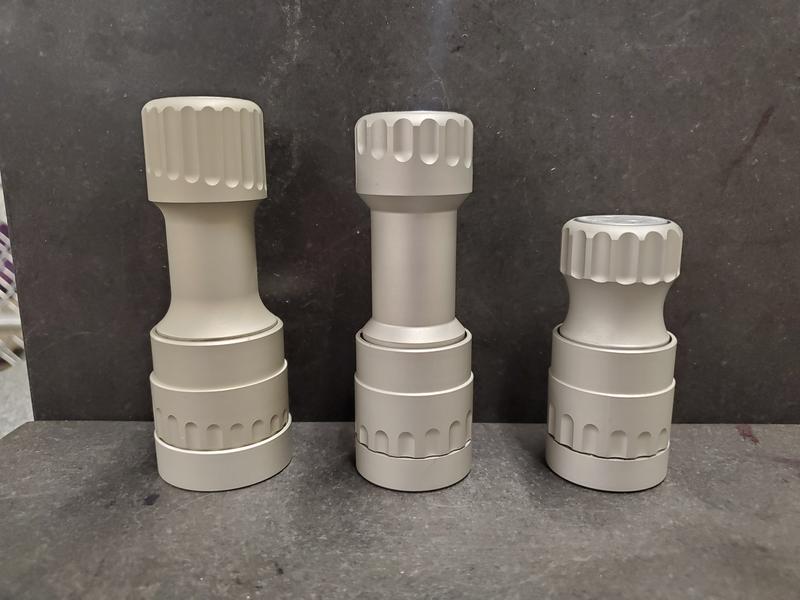 When I started developing the lights (the old generation of lights that eventually become the lights pictured above), there was a vision to design a very durable, very simple light that eliminated the 'bells and whistles' of most modern light design. Something that went the opposite direction of most current technology. I wanted less bells and whistles, no strobe. Simple, rugged, reliable, and compact.


I've always liked the simplicity of QTC (https://en.wikipedia.org/wiki/Quantum_tunnelling_composite) and have always been driven away from drivers and PCBs in LEDs, so around 2011 decided to try and build a light based around QTC. The problems with QTC were that it was vulnerable to shearing force as well as overcompressive force, which would limit the lifespan of the material. All the flashlight design from other manufacturers and modders back then was 'battery crush' which placed the QTC pill directly beneath the battery which would lead to these shearing forces and could also damage the battery with hard compression. This also did not allow the use of springs to keep constant battery contact. Over the course of a year of design before the first model (and finally a patent several years later) we were able to do away with battery crush and implement a piston system to house the QTC and keep it protected from these forces, greatly increasing it's lifespan and making the light extremely durable with no electronic components to break.

We constantly strive to eliminate parts rather than add them in an effort to eliminate failure bottlenecks. These lights have no circuit board to fail. And a very simple user interface...simply twist to brighten. These current designs have also eliminated all wires from the system.

Pictured below is the 'wireless' internals of a 21700 Lumenite. The contact leads also secure the LED very firmly to the Engine of the light which acts as a heat sink. 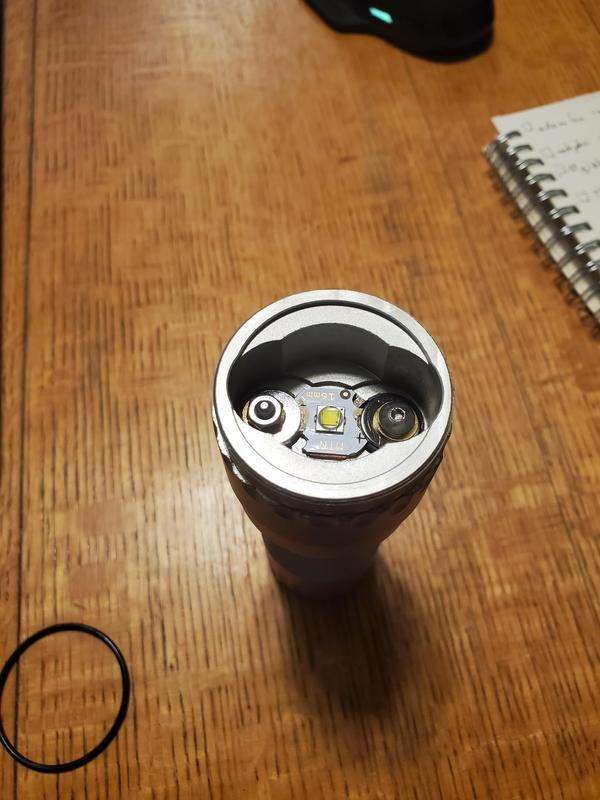 And here is a video showing the function of one of these lights vs. a traditional clicky light:

There are additional models/options, but as these three are most available currently I will update this OP again when others become ready. I will also occasionally offer small runs of things like the Tiny Tank or 18500 BlasterNugget on a first-come-first-serve basis for now.

These lights all operate on a proprietary and patented non-battery-crush engine that uses QTC or other pressure-sensitive smart materials instead of Electronics to brighten and dim the light. They are also completely free from wire-solder-point connections to break. This wire-free design allows the quick-change of 16mm MCPCB boards (with a little practice).

Continuing shortly with update while videos and pics are put together...
Below this point is old information and older models:


It feels great to post in an actual sales thread again. Finally some new lights are ready to go. 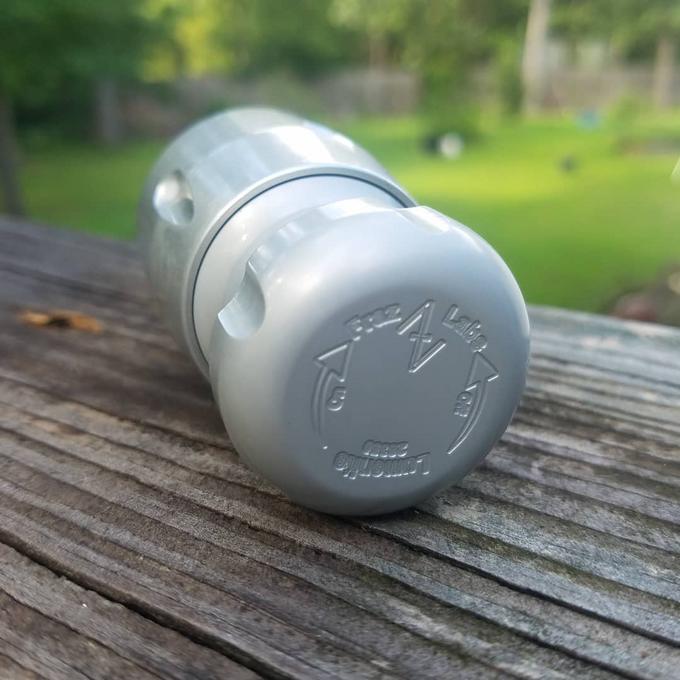 Here is a little background on the project if you are interested. The original project I documented here: http://www.candlepowerforums.com/vb...C-flashlight-from-scratch-(non-battery-crush) in the homemade section of CPF. The design developed and grew into better units which went on sale in the paragraphs below.


The following is a description of theQzark26350, a flashlight from my previous thread. It was the foundation for the new design that will be available in this thread. The idea behind this light remains the same and the parts in bold are edits to the original post:


Around 4 years ago(close to 10 now),I decided to design a light that went the opposite direction of most current technology. I wanted less bells and whistles, no strobe.Simple, rugged, reliable, and compact.

So I came up with this design. It is a very minimal, QTC-based,flashlight using an XM-L2or XP-L neutral. I eliminated all the parts I possibly could to try and reduce failure bottlenecks. It only has 2 solder points (on the LED pads), the LED sits firmly on the heat sink attached by machine screws. No printed circuit board to fail. And a very simple user interface...simply twist to brighten.

I also wanted to eliminate as many pieces of the traditional flashlight body as I could, so this only has 3. The engine, bezel, and body. It only has 2 moving pieces, which are the body and bezel. The light is very overbuilt and feels heavy for its size. The light is small.I measured the current draw at between 3 and 4 amps at the light's highest level (direct drive at full), depending on which battery you use. I recommend a safe chemistry or protected cell. The light can reach lows that are hard to detect and can slowly drain the battery.The light is in the 'off' position when the lip of the body is outside of the bezel lip.


Through the sales and use of this light I discovered the inevitable aspects of the design that I did not like, but more importantly I found the failures in the supply chain that I never saw coming. I had to learn how to machine all the parts in house and make the design and assembly as efficient as possible. I think this makes for a better light and also allows us to keep theprice down while making the parts here in the US.


Over the next few years I eliminated the parts of the design I didn't like (or combined them into a single piece with CNC) and experimented with making various models. Also we implemented the use of other smart materials in addition to QTC and made it possible for anyone to change these materials out (one of the biggest hiccups of the original design).


Being forced to redesign the light from near scratch, I tackled all the issues that bothered me about the Qzark 26650 design. The piston wear, non-replaceable QTC, and small bits and pieces of epoxy or other bothersome parts to keep things in place.

Here are the new designs in various stages of assembly (tumbled but no anodization on left, anodization on middle two, and raw aluminum before tumbling on right): 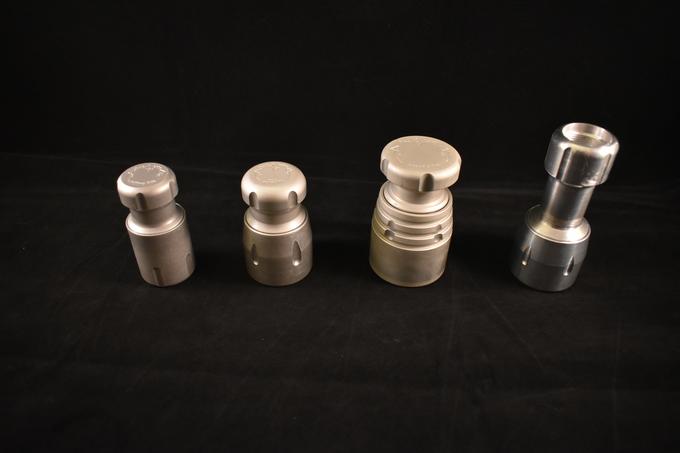 It uses a much improved piston system that allows user-replaceable QTC or any other smart material that behaves like QTC.

Here are a few other pics of the design: 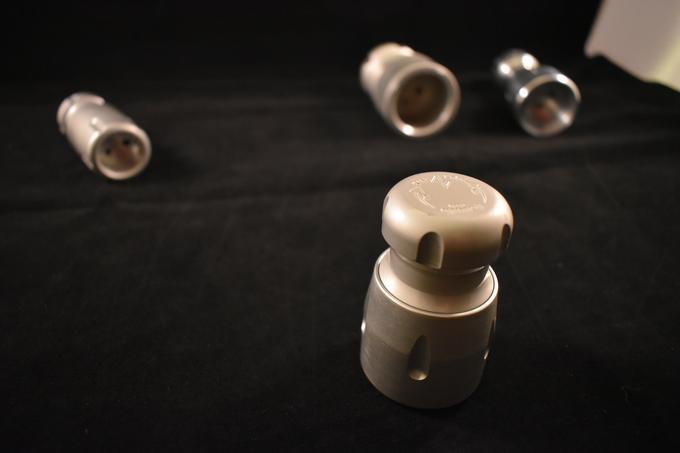 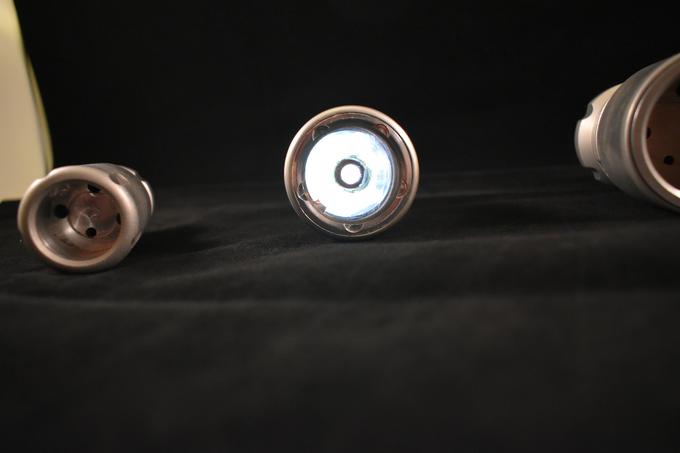 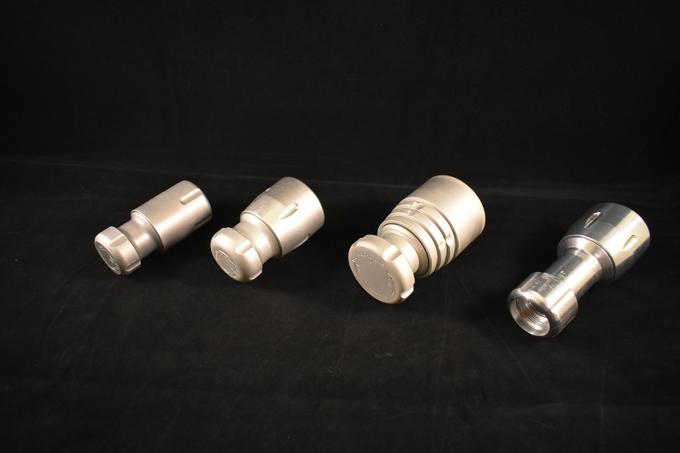 We design and machine all these components from scratch to make this system work and protect the QTC far longer than the older models of lights: 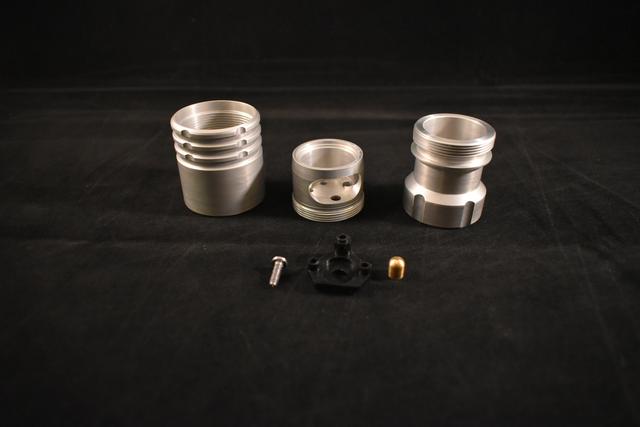 These lights are also tumbled, deburred, and natural anodize coated by us.

Right now I have only one unit for sale, a Lumenite 26350. I made a video of the exact light for sale here:


Notice because we do some hand processing on these and do everything in-house, these first units will have some minor blemishes on them.

The Lumenite is $125 shipped and comes with a 26350 battery. The charger is not included.


I will update this thread as we assemble the other models seen above. If there are particular models that interest you, let me know and I can make them in higher numbers accordingly. To see progress of these lights you can follow us on Instagram here https://www.instagram.com/frazlabs/?hl=en and/or youtube here: https://www.youtube.com/channel/UC221683jG_oP9uSUF-D2RAw?view_as=subscriber

I will update these channels often as we work to make the design better. If you are interested in the Lumenite above, please mention so in this thread or PM me.

Old information. Out of date as of 12/20/2020 (this post will be used to update with new design information)


Some tech details about the Lumenite: 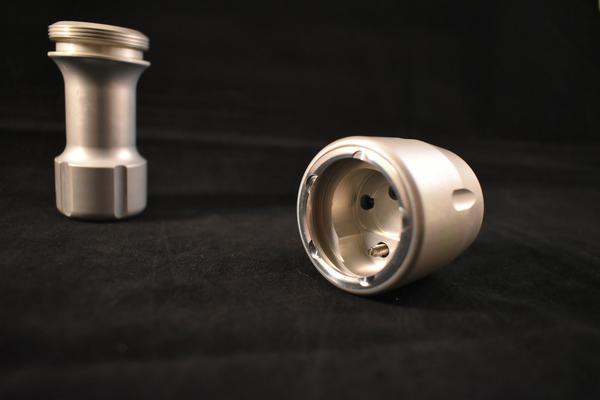 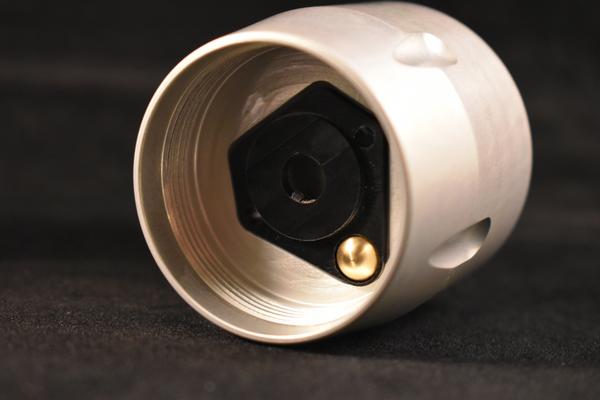 It is a proprietary design. All one chunk milled from a single piece of 6061 aluminum. I believe this gives much better heatsinking.

Some pieces we make here in Arkansas that go into the light: 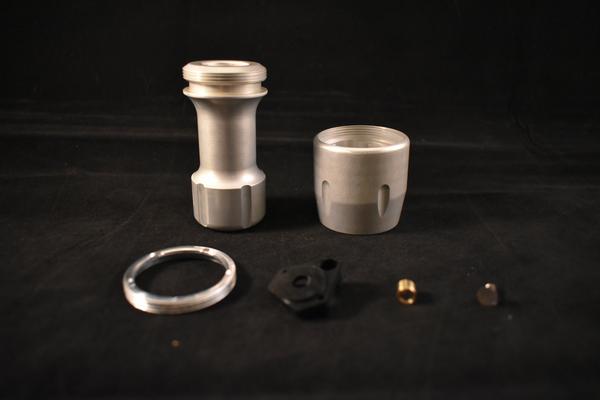 These pieces go into making the light easier to assemble and more importantly better performing. 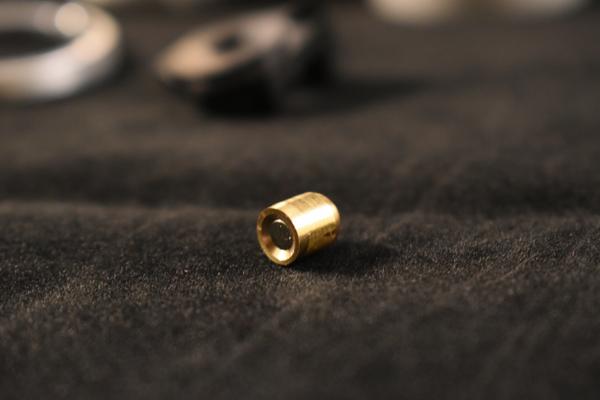 This piston system is what makes the QTC or other smart-materials effective. Protecting the QTC. 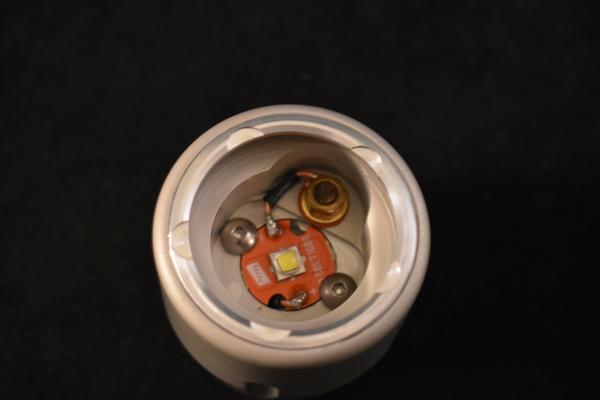 I like the engine to be a clean look/design. The fewer points of failure the better.

This will be updated with more detail shortly (on my phone at the moment...). Also, I will double check this list and make sure I didn't miss anyone.
Last edited: Dec 20, 2020

I'll be in for a Big Nugget too!

In for tiny nugget please

Thank you for the order NBP! It shipped today, and I've taken note of all these requests and will fill them ASAP. I'm back in town Sunday and in the meantime, Felicia is anodizing and getting everything ready. Again, thanks so much.

Yikes, I've been trying to log in all day! I'm sure I've missed out on the first batch but please put me down for one of those 26350 "Big E" lumenlite or whatever will be available in the future. Thanks, alex
Last edited: Aug 24, 2019
S

Awesome thanks! Can’t wait to try it!

Back in town and I'm back to work assembling the lights. I'll let you know what is available when they are finished and I'll try to get lights to the people in order of request first. I'll notify the thread and the potential buyers when they are done.

Thank you so much for your interest and patience.