I went down to a park next to the elementary school in my neighborhood and met someone who was flying his RC planes there. Anyway, we chatted together and he showed me a few things.

Well, he had a 2 cell 7.4 volt LiPo (couldn't tell the brand or capacity since the label was ripped off but it had red shrink wrap around it) sitting in the bottom of his tool box. He said it was probably a "bad" one since he remembered one of his batteries not accepting a charge and gave it to me saying I could keep it or get rid of it for him. Before I left, he told me that if I decided to get rid of it by exploding it, I should make a video for him. (he's blown one up on his driveway before) :naughty:

I took it home and was removing the JST connector from it when I "accidentally" shorted the pack for a split second and made a big spark. I had though the pack was dead since that was what I was told but I put my multimeter on it and read that it was still at 7.8 volts. With a little load (a 10 watt halogen bulb), I measured it at 7.73 volts.

Is this battery still good or should I try some more load testing ? If it is, I'll get myself a Triton charger and try using it for a project. If not, I'll "get rid" of it and make the requested video.

Li-Polymer battery's are the most dangerous of the bunch. Unless you know what your doing things could get bad fast so be carefull.

Check the battery for signs of damage such as dents (minor dents are ok if there are no other signs of damage), punctures, swelling, etc. Also see if it has an odor coming from it (if I remember correctly a sweet smell), which would indicate a leak. If it doesn't have any visual or olfactory signs of damage, it has a chance of still being usable.

Based on your measurements it sounds like the battery already has a full charge, so I wouldn't stick it on a charger right away. Discharging at a low rate is probably safer than charging it, and will give you an idea if it is actually holding it's capacity or just registering a voltage. Don't let it discharge to less than 3v per cell (6v for your battery) as it may cause damage otherwise. Check it periodically to see if it is getting hot, some warmth is normal but if it is too hot to hold then you are either discharging it too fast or it has some damage. If it lasts awhile and doesn't explode (oh yeah, put it in a fire proof container like a ceramic pot during testing!), then charge it at a moderate rate like .25c - .5c, again putting the battery in a fire proof container. You might also want to test on the porch or in the garage, somewhere that won't be damaged if the battery goes poof. Be sure not to overcharge it or charge it too fast as both can cause explosions. If if fully charges safely (watch for swelling and excessive heat), then I would say you have a good working battery. Did I miss anything?

As Mac said LiPo are dangerous and when they go poof, it vents like a rocket engine for a few seconds. Cool to watch, but not when you aren't expecting it.

Aside from scratches and dirt/grease on it; I think it looks ok. No funny smells from it as well. I already know what can happen when they vent so I'll take some appropriate precautions. I'll do some more load testing on it with light bulbs to see if it is actually still usable. 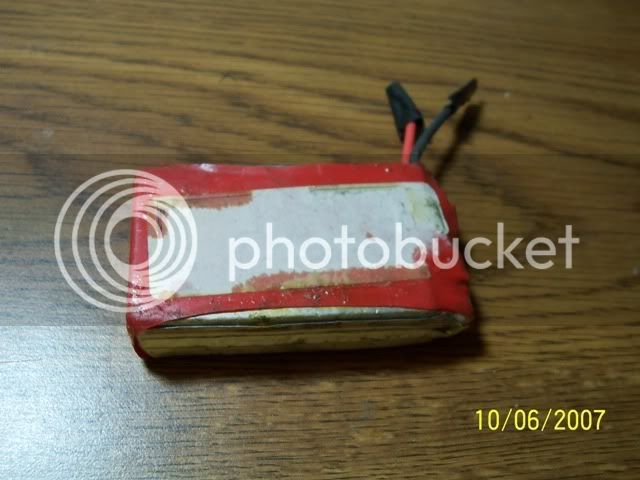 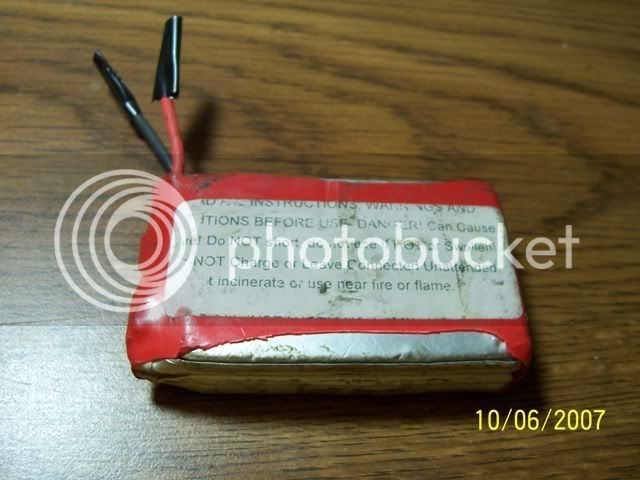 I turned off the light and it jumped back to 7.47 and seems to be going back up slowly. Guess this pack may still be good. Now what is a good, inexpensive charger that can do Lithium Poly cells ?

The guy I met at the park uses a Triton II.

Looking at your pictures, I see what appears to be some "road rash."

Li-Po cells tend to form crystals, over time, at dents and "road rash" sites. These crystals puncture the separator and cause micro shorts. As the shorts clear, the cells will slightly puff.

It is not known how much is too much and how long all of this takes, but you can ruin a cell by simply creasing the outside of the package with your finger nail.

Most of the problems with damaged Li-Po packs occur during charging, so make sure you attend to the charge and take the proper safety precautions.

I should add that many RC people use apparently damaged Li-Po packs for quite a while before they puff. "Road rash" does not mean the pack can't be used, just make sure your safety provisions are in place. I have tested some packs after they have puffed, and they are OK for lower current draws, but fall on their face under heavy loads. The problem is that they are unstable, and it is unknown how they will perform during charging and use.

The comments by SilverFox were correct. Swelling is the first sign of a problem I have noticed.

Another important consideration is the voltage matching between cells. See if the indivdual cells match in voltage to a tenth of a volt or so.

That would tell you the probability of overcharging in the past.

Since he had a good charger, matched cells should have been charged acceptably.

What if the cells were not balanced, can you balance them without a lithium batt balancer?

I did a Google search and found something about charging the cells in parallel and they will balance their selfs out.
Last edited: Oct 7, 2007

With Li-Ion or Li-Po cells, charging them in parallel will balance them, or you can charge each cell individually.

Please note that parallel charging will not balance NiMh or NiCd cells.

Do i need a special parallel charger, or can i use a normal li-ion charger?

You hook your cells in parallel and charge them on a normal Li-Ion charger. You set the charger to charge 1 cell and set the capacity for the sum of the capacities of the cells you have paralleled.

The major difficulty with this type of charging is that you frequently find the need for high charging currents to complete the charge in around 2 hours. These are usually not available until you get into the hobby chargers.

For example: If you had 6 2000 mAh cells paralleled and wanted to charge at 0.7C, you would need a charger capable of around 8.5 amps.

Very childish, selfish and irresponsible IMHO. Looks like it's popular these days to explode batts making a movie and showing it off on youtube. These people don't seem to think more than one second about what kind of substances are released in the air during the process or about the most evironnement friendly way to dispose cells. Certainly not that way. :sick2:

yuandrew said:
Before I left, he told me that if I decided to get rid of it by exploding it, I should make a video for him. (he's blown one up on his driveway before) :naughty:
Click to expand...

tino_ale said:
Very childish, selfish and irresponsible IMHO. Looks like it's popular these days to explode batts making a movie and showing it off on youtube. These people don't seem to think more than one second about what kind of substances are released in the air during the process or about the most evironnement friendly way to dispose cells. Certainly not that way.
Click to expand...

Eh. The world is not exactly full of people popping LiPos. I don't think the few that do are contributing in any significant way to global pollution.
Also, I don't think it's irresponsible.

I've had a somewhat heated argument about this over on RCGroups.
My usual suggestion to people having problems with puffed LiPo cells is "take them in the middle of a deserted place, triple-check that there are no flammable materials around, ready a fire extinguisher just to be safe, then apply 12vDC with a long extension cord, sit back and watch the fireworks".
In my opinion this is the safest way of disposing of a faulty LiPo cell.

There are ways of disposing of them that don't involve flames or deserted places, but they aren't 100% safe. Even if you use the popular method of discharging a LiPo and/or dunking it in saltwater, it still has the potential of going up in flames in the trash.

But if you blow it up in a controlled and safe fashion, you are then 101% sure that it very definitely won't blow up later when you're not expecting it to.

Note that I'm in no way suggesting or condoning stuff like "hey, we're drunk and stoned, let's blow up my old LiPo in the back yard for fun". That's the fastest way of making your insurance company unhappy. (the driveway counts as a stupid place to do it.)
I'm suggesting doing it in the most rational way possible with the purpose of preventing further problems. The fun that can be had in doing it is just a byproduct.

Location
Between keyboard and chair, in the US Midwest.

That's not free! It could cost you an arm and a leg...

You can justify just about ANY non-environnemental-friendly practice with this argument, because on a individual basis, your contribution to the global pollution seems extremely small. But it's all these small contributions that built-up and in the end, it IS significant. Stop thinking at your individual level, it's a bit too easy.
I get your point about what is the safest way to dispose a lipo cell. That said I've never heard of problems occuring with the salty water method. Assuming it's properly done. Another thing with your method is that it is a "violent" method. You can't forecast eveything, and not everyone lives close to a desert. Sooner or later, one way of another, an accident will happen with your method. There are many kids in RC community, you should think of this twice before giving such advice.

Fallingwater said:
I don't think the few that do are contributing in any significant way to global pollution.
Click to expand...