After returning some flashlights to their owners I decided to defenately go for the SR-90 from Olight.
I was really tempted to buy a TK70 wich is absolutely a very good and nice flashlight BUT:
a) I like te integrated charger of the SR90 battery more
b) I don't like hassling with separate batteries (I can charge the SR-90 in my car with the optional 12V charger)
c) I REALLY LIKE the super concentrated beam of the SR-90 :naughty:
d) I find the SR-90 a bit more solid and idiot proof: with only three modes even my wife and children can use this flashlight and hey, who needs more than low, high and strobo?? :thumbsup:.

At outdoor4you in the Netherlands (where I bought this SR90) I also had the possibility to compare the ST92 and the SR-90 and what struck me was the HUGE!!! concentrated beam of the SR-90. I bought also a fandyfire and both the dealer and I were amused that both the flashlights (usning 3 x XM-L led) had about the same output!!!!.
The difference was the more tighter beam of the SR92 and the up to 3 times longer operation time of the with 6 x 18650 equipped SR92.
Another difference was that the fandyfire was only 17% of the price of the SR-92....oo:.
Still Quality pays off!!

Looking for a nice place to fool around with this lights I drove to the farmlands in the neighbourhood and put down my Nikon D200 on a tripod at the top of a small hill (next to the road).
Aperture fixed at F4/F5,6 and shutter time at 1 sec.
Here are some pics all made with exposure 1 sec and F4 / F5,6 tele 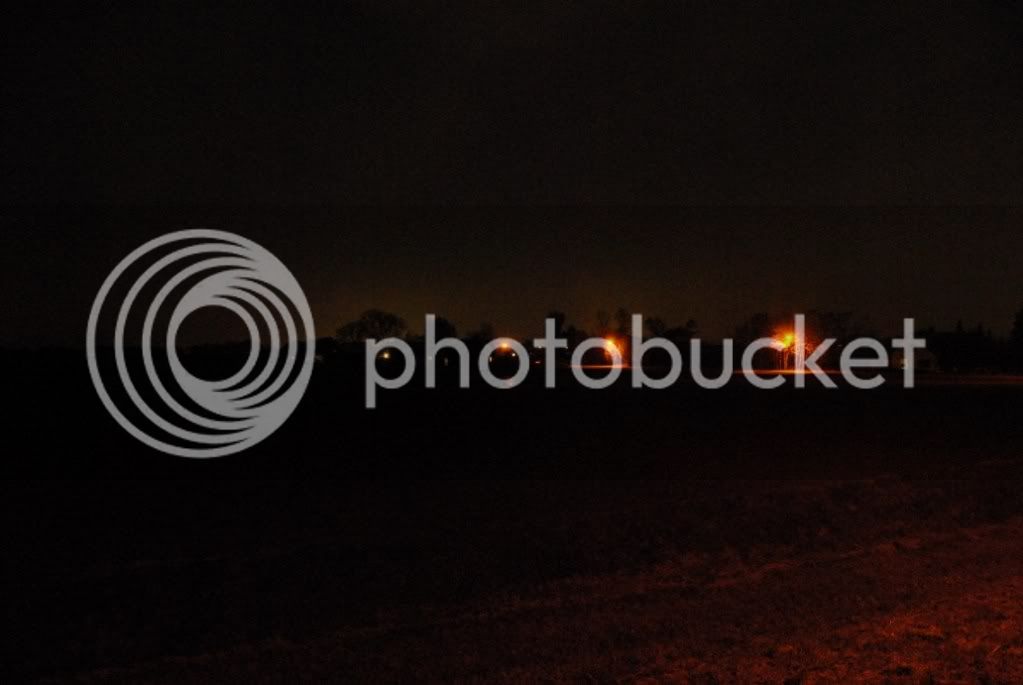 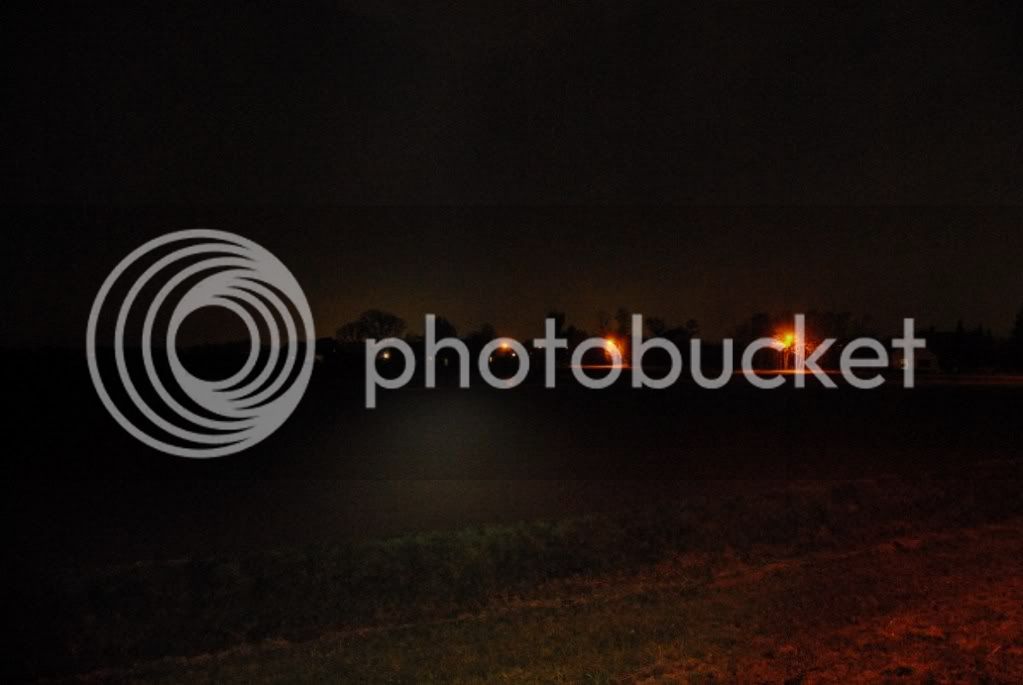 The fandyfire 3XM-L on high, not bad for an only € 50 flashlight oo: 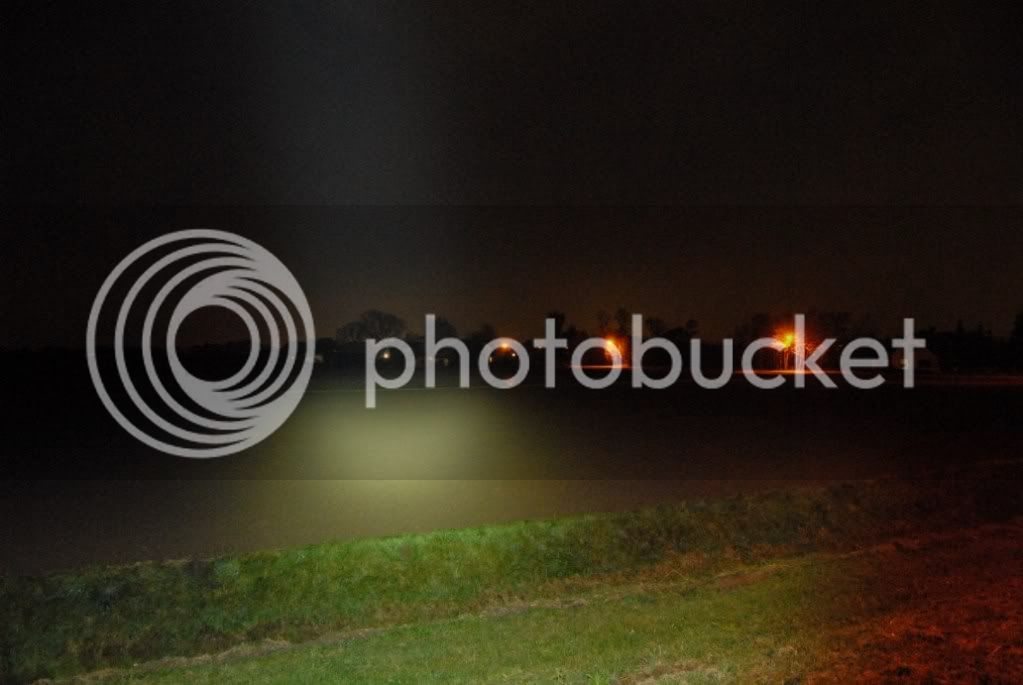 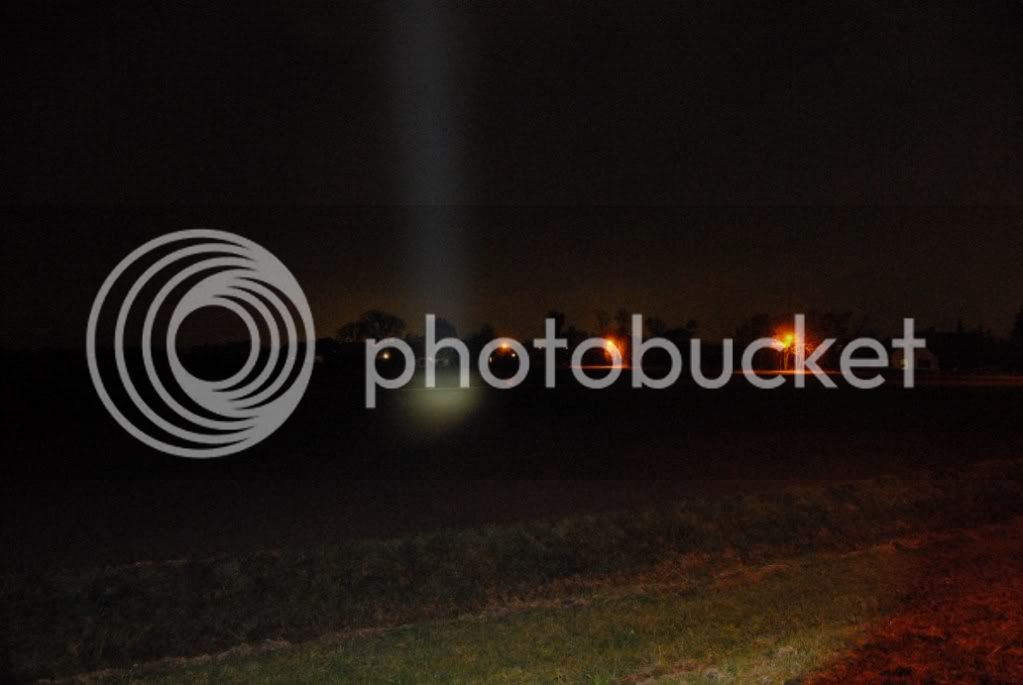 and the Olight SR-90 on high. What a huge concentrated beam!! 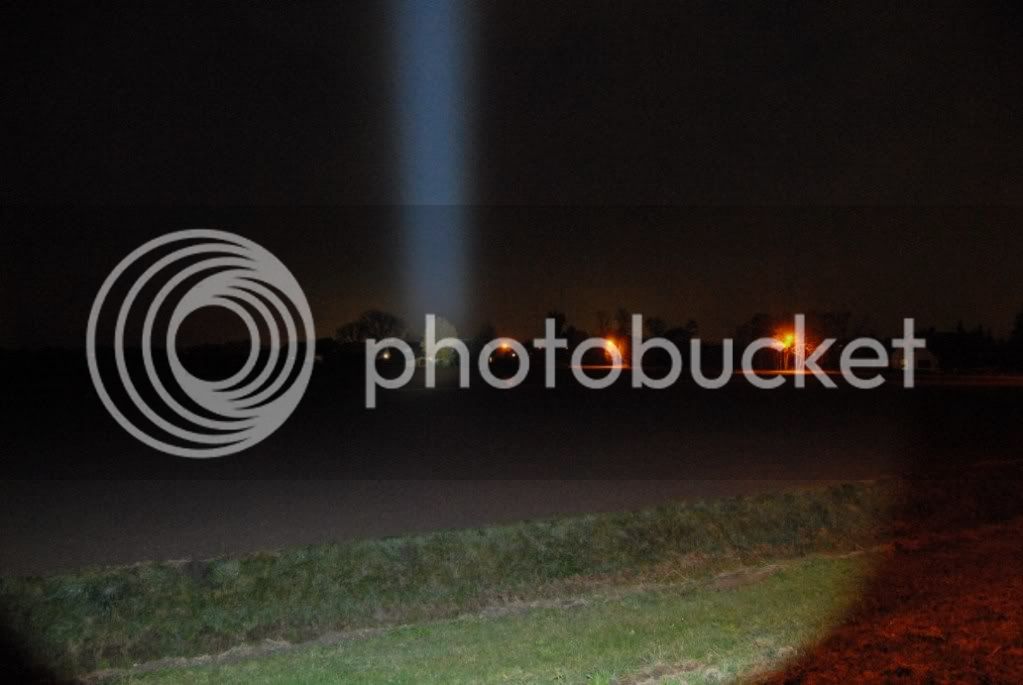 Having some fun with a longer shutter time: 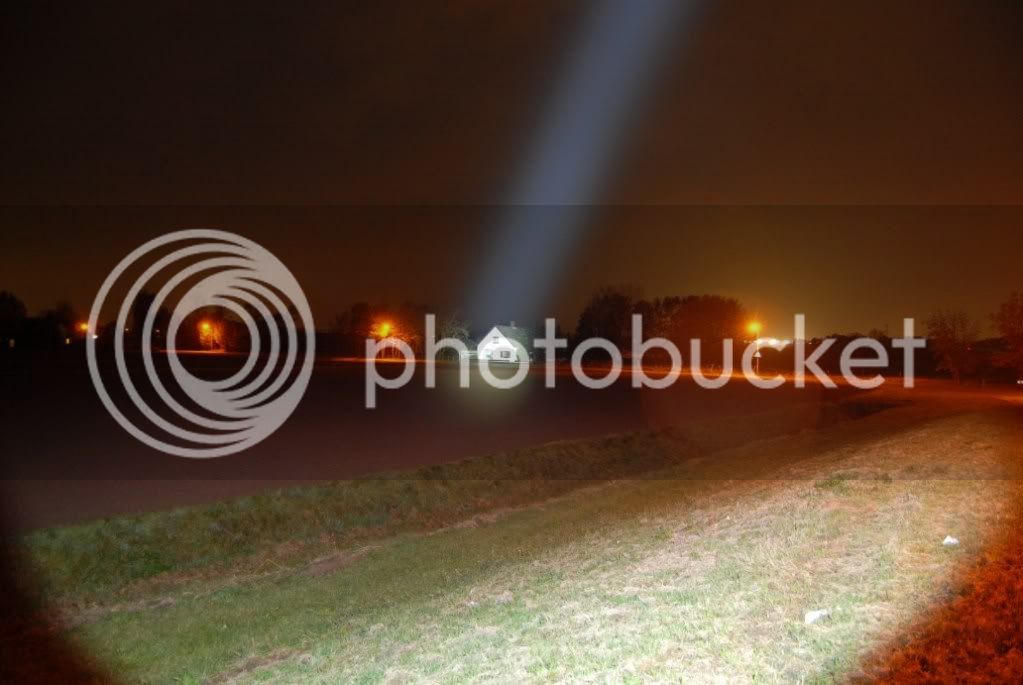 Walking around with such a portable beam feels good! :naughty:

Today I went to the golf court and remembered that these people placed very handy boards with distances written on it .
Keep in mind that at the moment I took the pictures, darknes was falling very rapidly, with some light difference beteen the reference picture and the other ones.
If you look at the distance between the 150m and 200m mark, it seems to be smaller than the distance between the 50 and 100m mark, this because of the use of a telelens.
The end of the driving range is at leat 300 meters away, one of the pro's told me.
All pictures made with exposure 1 sec and F4 / F5,6 tele

At first the picture, taken in daylight: 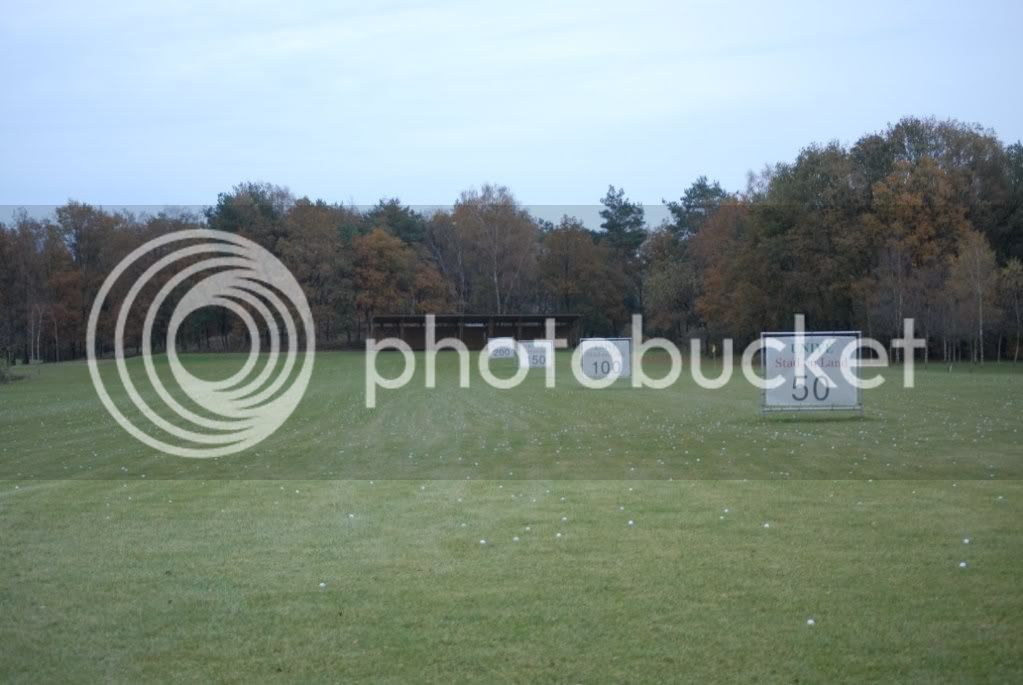 Then the ultrafire P7 wich barely can be seen (imagine that it outperforms the maglite 4D with two fingers in its nose :naughty 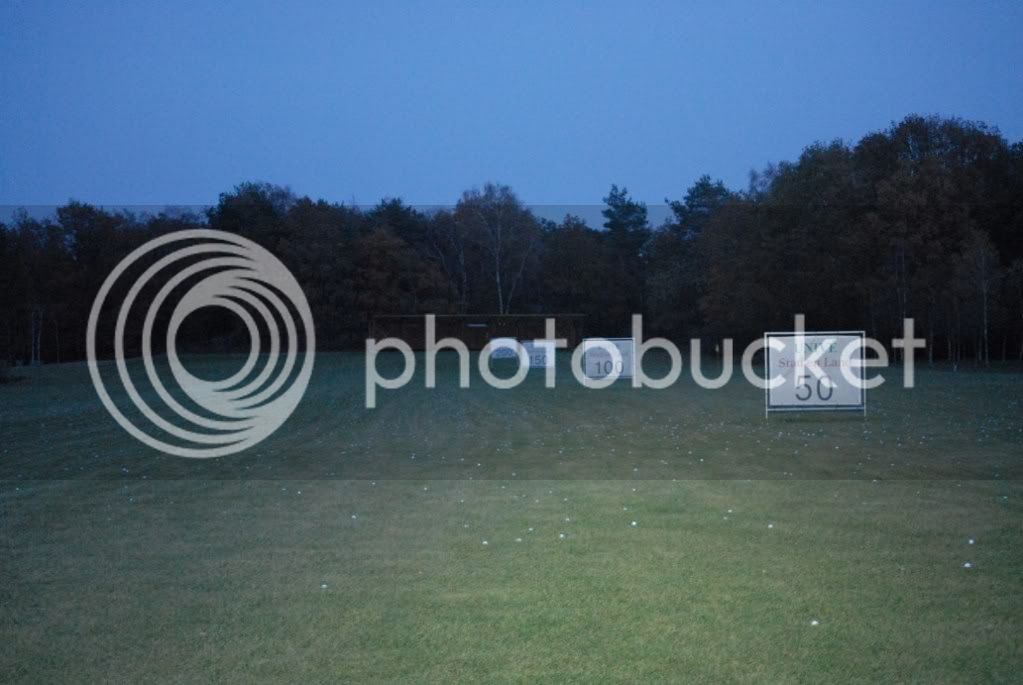 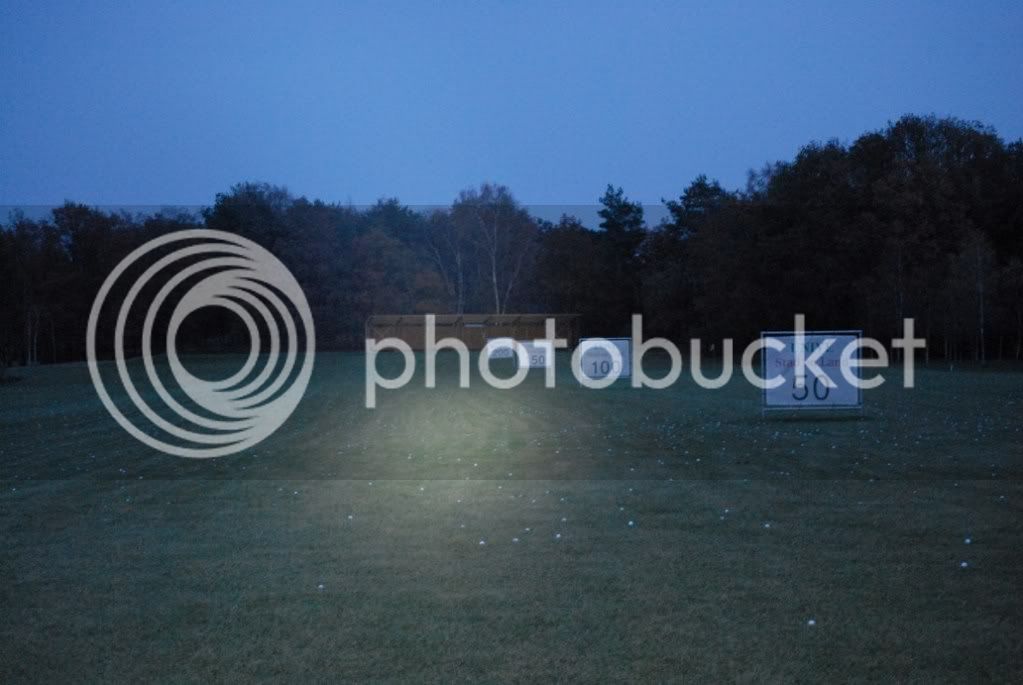 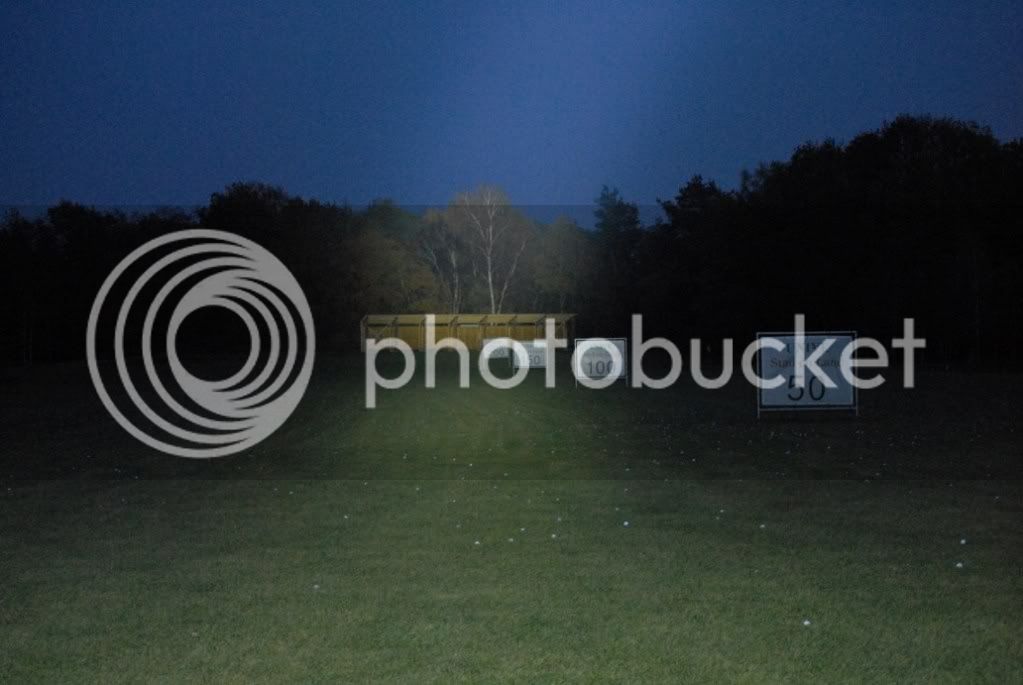 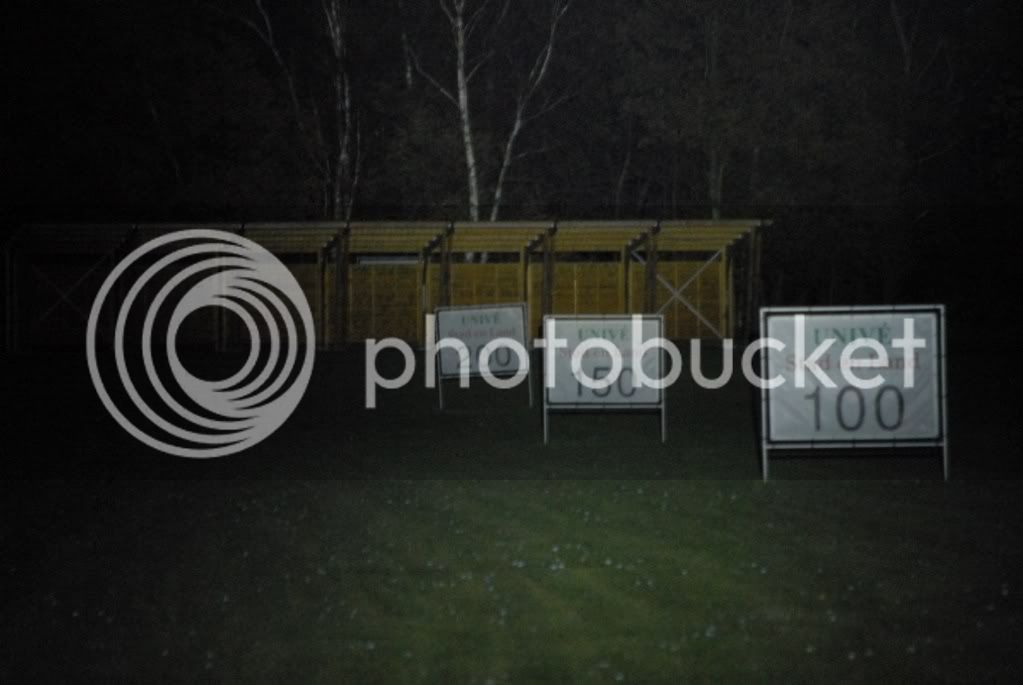 After this I went home very satisfied with a new buddy in my car :buddies:
Last edited: Nov 5, 2011