Well, i want a new blinder, I don't even own a cree or SSC based light so I have been looking around. my main criteria are:

45-55 dollar range
must accept a Li ion 123
Small, But:
Has really good THROW(for size).
Would like 2 levels at least
Prefer a switch vs twisty

I have looked at the fenix, P2D, and P1D, the Lumapower Incendio,(love the size and look of this) but REALLY want some CPFer's that own these and other's to help me pick one that throws well. I would go with a D-mini Q5 if i could afford it since i don't think the std D has two levels.

Could someone that has compared these and other lights I may have missed help an ol' CPFer, who hasn't kept up on the new stuff find a new lil' light that will out throw my old HDS B-60? VG
Last edited: May 11, 2008
D

I've got the p1d q5, and the p2d w/ clickie should act the same. rechargable 123's just make the 5 mode go to high. this light is a very nice light, but I have worn through 2 by the keychain holes essentially failing. Other than that, the beams/thow are good for everyday usage, and I use low and medium alot.

The P2D Q5 is at the top of your stated price range. I doubt you're going to get any better unless you shovel a couple more sawbucks on your price range. If you do then look at the new JetBeam II IBS. I have the III but I read the review of the II at it looks awesome. It even has some focusability.

A lot of people here like the Olight T10 also. It seems very similar to the Fenix in features and size and output. I almost bought that instead of my P2D but I went with the Fenix because I liked the UI in it better.

EDIT: Just saw your lion requirement. The P2D will take it but you might lose lower settings. Me thinks you're going to need to up your price range or shop on DX.
Last edited: May 11, 2008

I'm modding mine...I shaped a strike bezel, took off the tailcap protrusions, putting in a glass lens, and getting reading to Duracoat it. When thats done I have a Q5 I got from Datiled thats going in it. The finished product should be pretty sick! 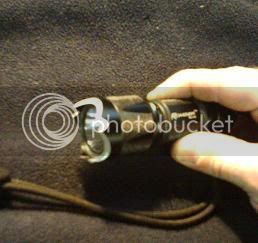 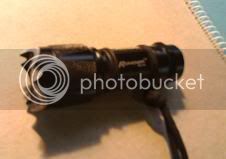 PS: They have them on DX, but you have to search for them. For some reason I can't find them anymore by browsing. It's a VERY easy light to upgrade.

keep 'em coming! I am gonna reseach the JetBeam II IBS, olight T10, and the RC-V4.(that's a mean looking light Delta!) soon as I post this. I really appreciate all the suggestions. If I bump up $$$ some whatnot and other's, what would you recommend? (In same vein, roughly what is the brightness difference between a Q2/Q4/Q5 ?)

Yes I really like the Brightness of the P3D but am firm on a one cell light. Also, anyone own an Incendio and could compare the throw to any mentioned light's?, I love the look and size of that little thing, but have enough knowledge that it likely doesn't have enough reflector depth to throw well. would dig a new SF E1 backup but, a little over my budget, and I would like around 100 Lumens. VG

If your budget gets bigger, you might just LOVE the Surefire L1 Cree (it doesn't say "Cree" on it but the latest version has it). It's phenomenal.

Another light that is well loved around these parts is the Novatac and that one takes RCR123's without ANY problem. They have 3 versions that put out 120 lumens and the 4th version is an 85 lumen model that lists for $99. However, even the 120 model can't throw as well as the P2D and the P2D can't throw as well as the L1. Indoors they are all similar with the Novatacs having the nicest beam.

Both of those lights are double or triple your budget but I've seen some L1's go in the marketplace for under a hundred lately. Breaks my heart! One that had a little wear went for $75 IIRC. That is a freakin steal. But, I don't know how well the L1 takes to rechargeables. There is another thread discussing that but this site is hobbled without the search function.

An L1 is up there fo' sure(fire) I really like the E1B but for now I need to keep it on the front side of 70$.(although SF and HDS are my fav brands) Sorry, novatac can go on without my $$ EVER. After they would not honor the repair contract in the HDS buy out and will not repair my light or replace it,, never.
My HDS B-60,my main EDC, #100 after many yr's of hard use has a problem with the emitter, it's either popped up from the slug or is going out, making the hot spot look sorta maglite'ish. Henry of course has implemented his repair
policy so I an going to do that, but i really want a new cree/SSC light and understandably henry is repairing the lights to original (LuxIII) status.

(I originally was gonna have milky mod mine to SSC, but it is one of the first ones made and has the integral reflector, so the slug has to be backed out
and this something that according to henry, can be delicate, and/or even break the back off the electronics so i don't want to chance it being rendered useless, since there is no way to buy a replacement module)

I looked at all the lights mentioned and there are many cool ones, I did stumble on the D-mini "digital", and am looking at it hard. I want a light with throw in a 1X123 size because my new dwellings are lit pretty well but not great, so i need punch. Still want a incendio just because it's small and cute, and i'm a flashaholic, but untill someone says "it throws like nolan ryan" I will save it for later.

Now that I am a little less in debt i have three light's i want for sure (the EDC/thrower this thread is based on, a fenix LOD, and an incendio) but need to do up keep on my others: get a new batt stick, power supply, and WA bulb for the MC, a couple new li ion 123's, new lumens factory lamps for E1e and E2d. Man i wish someone made a killer 100+ Ln head to fit my E1e and VG bodies!!!

Keep 'em coming, and any opinions on the D-mini digital, from the threads I read on the Olight It's on the short list too BTW, the thread starter even recommended it for throw. VG

Another vote for the P3D Q5. One of the handiest lights I own.

Patriot36 said:
Another vote for the P3D Q5. One of the handiest lights I own.
Click to expand...

I wouldn't mind , looks like a great light, but there are issues for with 2X123 lights most of all li ion support, and still want a little shorter EDC. VG

For the price I would go for the Fenix

I am on a similar quest myself, although I don't think the light you want can be had for that amount of money.

Have you considered the Wolf Eyes Angel series? That's at the top of my list right now. www.pts-flashlights.com

Anyway, I'll be following this thread with interest.

Here is an alternative that hasn't been mentioned. Great light, my current EDC, awesome output, nice size and runs with RCR123, what more can you want

EDIT - seems it was mentioned as i was posting :twothumbs
B

Yup, great minds and all that...

Kudos to Wolf-Eyes for leading the way with rechargeables in a high spec and affordable package!

BTW can you give us more info and some piccies of the light? Not much info from PTS at present.

Buffalohump said:
BTW can you give us more info and some piccies of the light? Not much info from PTS at present.
Click to expand...


What would you like to know? I have half written a review but work is busy at the moment so it won't be finished for a little while. Here are some pictures, hopefully they are enough to wet the appetite

Well, the pictures have answered my most important question - whether its a clickie or twisty. And I like the answer very much!

My other question was in regard to dimensions. It looks about perfect for EDC from the pics, but I know pics can be deceiving.

The clip looks like a real winner. Lord knows other manufacturers have really battled to get this fundamental little detail right. Why I don't know.

Looking forward to the review!

Here is probably the best way to answer your dimension question.

The Angel C is only a touch longer than the E1E, whilst it is about the same diameter as the body of the E1.

The switch is a reverse clickie, which i am sure will turn some off, but after using it regularly i like it. I wouldn't use it on duty, but for a EDC light it works fine.
B

Reverse clickie is OK with me.

One more question: which version do you have?

I was gonna go with the 3 level one, but now I think the 2 level will be sufficient...

I have the 4 modes in both lights, wasn't really a choice as that was the lights that Quarterflash got into the country.

Maglite came out with a new tactical light
2 3

Manker MC01 - Awesome little EDC light. Really like this one!

O
Fenix E18R got a little too cold?

My next buy I want a monster thrower and flood any recommendations?
2