Have You Ever Met Your Favorite Celebrity?

Here is what I think is an interesting topic, of which there are a few parts.

1) Have you ever been able to meet your hero in person? And if so, who and how was it?

2) And if not, whom would you most like to meet?

3) If you could only get a picture with them or an autograph, which would you choose?
T

When I was a child, yes. I met William Shatner and Leonard Nimoy at Toys R Us. not both at the same time. They were promoting the release of the Star Trek action figures (little boys don't play with dolls, right?

They were both very nice, of course. Shatner's hands (we shook hands) were very strong, but not he wasn't iron gripping anyone. Nimoy's were softer. I don't recall if he did the Vulcan nerve pinch or no, or if he did the "live long and prosper" thing either. I don't have the toys or the boxes anymore, I played with the toys and though the boxes were attempted to be saved, they did not make it.

I can't say that I'm dying to meet any celebs now, but I wouldn't mind running into Angelina Jolie without Brad Pitt!

I'd go for a picture, but even that would not be high on my list. I've never really understood autographs, though I know that personalized ones are worth less, they don't sell as well on Ebay and the like.

Hobnobbing (sp?) with the celebs is not something I'd really care to do. If that's your thing, fine, but it doesn't do much for me. Kinda reminds me of South Park when bystanders in the background of news stories start screaming "I'm on TV, I'm on TV!"

And I'm sure that if Jessica Alba thought there was even a chance of that happening, she would get a restraining order sworn out against me this very instant.


Not really into that celebrity thing though...

I did have an opportunity a year or two ago to meet two pretty famous actresses that I always 'really really liked' at a local charity thing, but decided it wasn't worth being among the crowd (even though it was a pretty small crowd for a small charity in a small town).

Kind of regret not going though, because people that went said that they were both really friendly, nice and chatted with everyone like they were old friends.

Have met a few celebrities and a few U.S. Senators, several Congress people and Governors, but none of them were 'favorites' or anything like that.
Last edited: Apr 19, 2006

Sixpointone said:
1) Have you ever been able to meet your hero in person? And if so, who and how was it?
Click to expand...

Certainly not a hero figure for me, but did chance upon some fellow named Brad Pitt once while I was sitting outside a bar and grill waiting for a friend. That was 8 years ago or so.

This person (B. Pitt) came out of the restaurant with (3) guys. I was thinking to myself, well he must be somebody. Everyone around me kept calling his name, which did not sink in just yet. I sat there wondering to myself that he looks familiar, but could not put a name to that popular face. I did not want to stare at him while he waved to the people sitting around. He tapped the table I was at and initiated small verbage—"Hey, how you doing?" Told him I was fine and asked the same, and he responded, "I'm doing alright. You take it easy now." A car approached and he and the three men he was with got in and drove away. Again, his name did not register until he drove off. I should have paid more attention to what the others were saying when they called his name.

No one in particular.


Sixpointone said:
3) If you could only get a picture with them or an autograph, which would you choose?
Click to expand...

Again, no one in particular.

Location
The Land of Baked Beans and Red Sox

Absolutely!!! Dubbaya and I are Tight like that!!
:buddies:

I have had the pleasure of meeting face to face several times with the "Cool Daddy Administrator" and forking over large sums of money to him....

Over my life I have seen up close and talked to quite a few , most were very nice but the hero distinction is reserved for my mother, father and a select few.

I've met Garrison Keillor on two occasions and I got his autograph once. Also met Tom Keith (his sound effects man at his home stands) and spoke to him briefly.

I met Richard Dawson many years ago at at NATAS dinner although I'm not particularly a fan of his. Also met George Harrison's sister although she's only sort of a semi-celebrity. It was cool nonetheless, and she's a sweet lady.
Last edited: Apr 18, 2006
G

In the 80s, Kevin McHale at Logan Airport. You don't realize how tall these guys are until there are surrounded by normal sized people. He was with a group of people but they didn't appear to be bodyguards or anything like that. Although I didn't talk to him, quick pleasantries were exchanged between he and the friend I was with.

I met William H. Macy, while waiting in line to see the Keenan Ivory Wayans show. Met Keenan...total jerk. Didn't even bother to ask for an autograph.

I had the pleasure of meeting and hanging out with Kyle Cook from Matchbox 20 while he was on tour in San Juan Capistrano with his own band, The New Left. This was at the Coach House, and if any of you have been there, I was sitting in the back next to the bar. After he tuned his guitar, he came over to the bar to get a drink. I talked to him shortly, asked if I could get a picture with him, he told me he would be glad to after the show. After the show, he came right over to where I was sitting, and we started talking. My friend invited him outside to see his limo (it recently had some very nice mods done to it). We sat in the limo and talked for about a half hour, took some pictures in front of it, and he invited us back inside. It was cool when the bouncer told us we couldn't go in, and Kyle said "They're with me".

He invited me to PM him on their board anytime, and he even went to my website and listened to my demos...said he was, overall, impressed. Very cool and down to earth guy. Not to mention he is one TALL MF. My buddy in the pic below is 6 ft.

My friend with Kyle: (STILL haven't received MY pics with him) 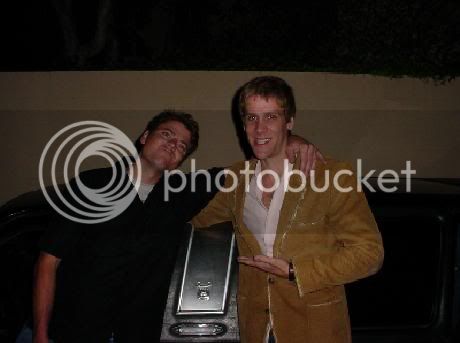 Christy Canyon sat on my lap for a photo...sorry, guys, but don't think it would be appropriate to share here.

my name is fake

I went to college, and did college radio, with Ashley Judd. She was very laid back, and prettier in person than she is in movies or pictures.

I met all the guys in REM, except Michael Stipe, briefly. They were very chilled out. I've met several punk/alternative musicians. Basically if you are into underground music and hang around the small venues you will probably meet some of the band, especially if they are on the way up.

I met some guy from an old TV sit com in a mall several years ago. I can't even remember his name or the show. I was with a friend that knows amazing amounts of trivia and he recognized him and was very excited.

I helped Joan Baez in a store that I worked in, John Michal Montgomery too. They were both extremely nice.

The Governor of KY, Ernie Fletcher, used to be my physician.

I'm actually happier to not meet a lot of people. If they are huge jerks it is just a let down. I met a sci-fi author whose books I really enjoyed and he was such a miserable human being that I never read any of his books again.

I was waiting for my sister to get off a plane when I lived in Sacramento. The first person off the plane was CHUCK YEAGER! I said to my 14 year old son "That's Chuck Yeager!" he says "No it isn't!" But it was.

I try not to bug celebrities, but this was too much.

My sister got off, and instead of saying "Welcome to California!" or anything, I said "DO YOU HAVE A PEN!!"

I got his autograph and told him how much of a hero he was to me.

Great evening. I'm sure he had no idea what it meant to me.

It must have been almost fifty years ago that I met Moe Howard (Three Stooges) who was making an appearance at a shoe store in Pittsburgh. Not really a favorite, but more recently met Brian Jacques (author of the kid's book series, Redwall) at a Barnes and Noble book signing. Caught sight of Richard Dreyfuss and Herbie Mann in an airport about twenty years ago.

I met Jose Canseco once.. He was playing independant ball for the bears.

wasn't really a "meet" but I froze as he walked by me face to face...lol

met robbie benson have a pic somewhere he aint fameos anymore when i was a kid ran in a race he was in.would like to meet ricky willams from the dolphins

Just remembered, I also met the former drummer for Ronnie Milsap. He was a nice guy.
Last edited: Apr 19, 2006
L

I met my boyhood idol, most here probably will not recognize the name or know who he was, but it was Fred Bear. Owner of Bear Archery, and a Michigan legendary archer, one of the original greats with the likes of Glen St Charles.

One year when dad and I went up bowhunting the tip on one of the limbs of my bow got caught in the trunk and snapped. We went to Grayling to the Bear Museum and factory and picked me out a new bow. I got a new Bear Grizzly and Fred Bear happened to walk through at that time, he stopped and talked to dad and I for probably a half hour about hunting and bows. It was awesome, he even signed my bow which I still have. He was a very nice man, and damn nice to an awestruck kid.

Alloy Addict said:
I met some guy from an old TV sit com in a mall several years ago. I can't even remember his name or the show. I was with a friend that knows amazing amounts of trivia and he recognized him and was very excited.
Click to expand...

D
Have You Ever Met A Fellow Flashaholic ?

Have You Ever Met a Fellow CPFer's In Person?
2 3

Have you ever flashed your friends?

How many states have you visited? Your favorite? Still want to see?
2 3