I'd often considered adding a microcontroller core to my existing hyperboost driver, but never had the time or saw the need. With several 7 and 8 XML based Star boards appearing on the market, I figured there might be a use for a boost driver that could do justice to some of these LED arrays.

So, took my existing hyperboost driver and merged it with my flex microcontroller core to create the HBFlex driver. I normally prototype drivers but in this case since it was based on two proven cores I decided to risk straight to production PCBs.

So, here's the first assembled board prior to applying power to test. Complete with an assembly error I had R10 and R11 flipped, so even though the board programmed and the uC was running correctly, the LED array emitted darkness... R10/R11 set the maximum open circuit voltage (to protect the boost driver if the LEDs aren't connected) to 49V. With R10/R11 flipped it was turning the driver off before it could boost... 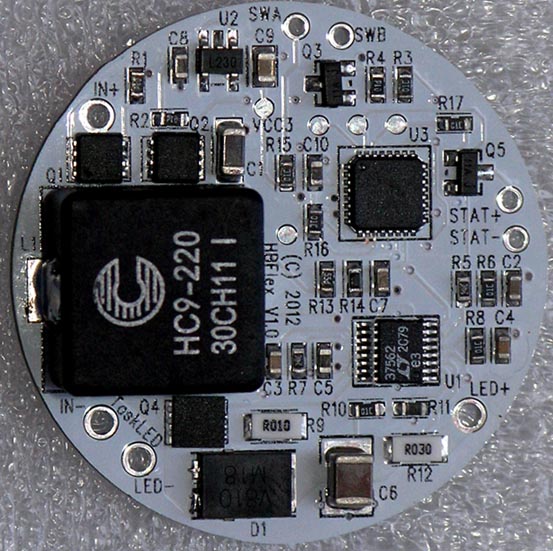 A bit of probing and I caught my assembly error and switched R10 and R11 and the board fired straight up. 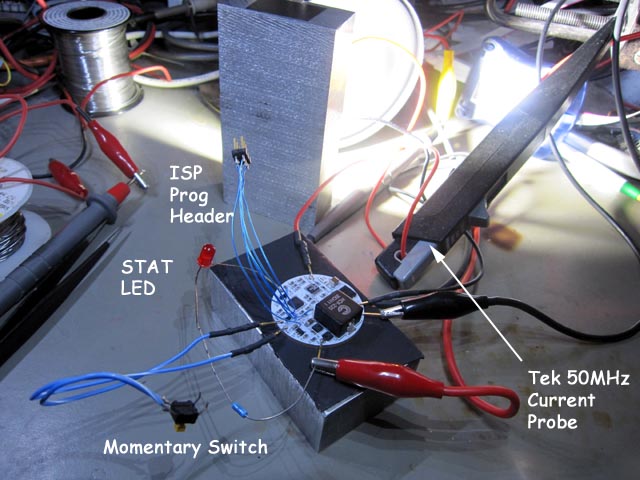 To perform dimming below 500mA I've implement a 400Hz PWM scheme. This works well and allows dimming (1:10 duty cycle) down to 50mA average. A benefit of the PWM dimming is that the LED never operates below 500mA, so the Vf will never be lower than its 500mA value. This is important for a boost driver where a fresh battery and low drive current can cause the Vf of the array to be low enough to allow direct drive until the battery voltage drops. This would mean lack of dimming range until the battery voltage drops.

Above 500mA and the HBFlex uses current control for dimming. The user can select one of 6 current tables (700mA/1000mA/1500mA/2000mA/2500mA or 3000mA maximum output). Once a current table is selected the firmware will provide a number of dimming values from 50mA up to the maximum selected. The number of dimming steps depends on which UI the user has chosen.

Now it was time to start pushing the driver harder. Here's a picture showing the power feeding into the driver from one of my bench supplies: 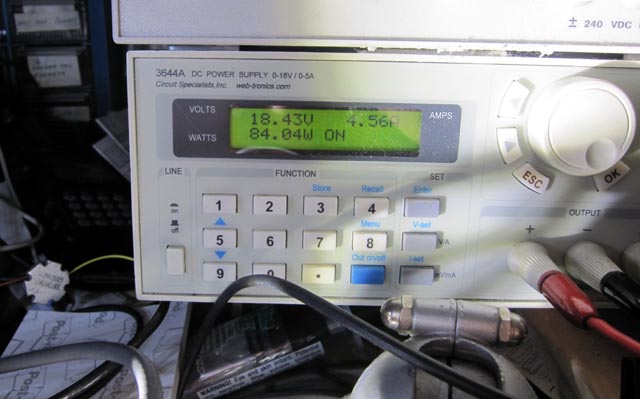 Yep, 84W going into the driver (which is only 1.37" in diameter). The driver is pushing nominal 2.5A at around 30V into the LED array. Measured efficiency (volt meters right at the in/out pins of the driver) around 95%.

Here's 2.5A (accurate measurements performed with a meter) on the scope: 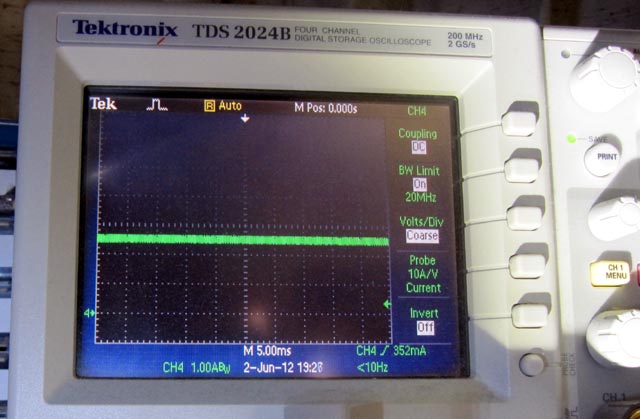 That's basically the limit of this power supply, it has a max of 18V at 5A that it can drive. So, to test the 3A capability of the driver I moved to another power supply. So, about 100W going to the driver and about 95W going to the LED array. Again, measured efficiency of 95% - 96%. 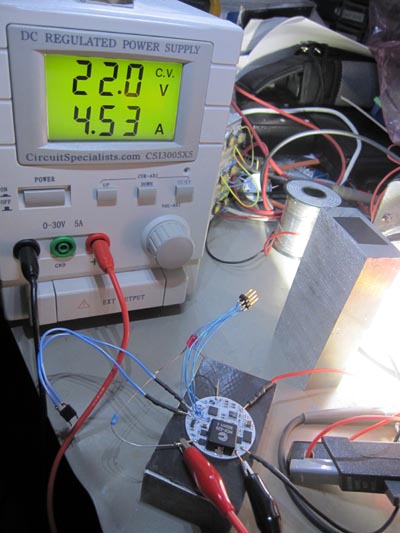 To do a longer runtime test to verify driver operating temperatures I had to cool the LED array, 95W heats up a block of aluminium pretty quickly. So, I used the same method as when testing the array at 100W with a hyperboost driver... dunk the aluminium block in some water

That allowed me to run the test for 15 minutes, plenty of time for the HBFlex to reach steady state. So, with nominal 95W driven to the LED array, after 15 minutes, the hottest area on the HBFlex was 47C and the heatsink bulk temperature was 30.6C. So, about 17C differential which confirms a good thermal path for the hot components to the heatsink. The driver is just "sitting" on tacky thermal pad, so with the thermal adhesive tape I now use the performance can only be better.

Basic specs of the driver:

I'm still testing the driver operation and firmware so this is a preview.

Man, what an awesome LED driver. It is quite neat that you need a water cooled heatsink just to test the output power capabilities :bow:

Will almost certainly build a light around this driver if funds permit . What an awesome driver . Was waiting for a 3A boost driver for some time .

Can it drive 3 XML from single 26650 in series to 3 or 3.5A?
Will this be a driver that doesn't require the mag momentary switch mod?

No, and you likely will not find a boost driver that could do that with anything approaching reasonable efficiency. You are asking to boost from nominal 3.7V up to 10V. With 3.5A drive current you would be drawing 10/3.7 x 3.5 = 10A or more from that single cell (especially with the likely poor efficiency)...

This driver like all my flex drivers, requires a momentary action switch to access the various modes/features. Modifying a mag switch for momentary operation AND to not carry the input current is already well documented. The advantage is the switch no longer needs to carry high current.

The HBFlex needs a minimum of 7V, though bench tests show it will operate correctly at 6.5V. The conservative spec is 7V for the full output current rating.

The issue with a low input voltage driver (i.e. single li-ion) is that you only have around 3.7V (or less) and that isn't sufficient to fully drive power FETs that have to be able to run at 50V. i.e. to get high efficiency at high current and higher voltage requires higher gate voltage for the FET (7V or more).

This driver is aimed at larger number of series LEDs or LED arrays, so can't cover the single cell end of the spectrum.

Nice Driver
why not send to Italy?

flinko said:
Nice Driver
why not send to Italy?

Italian Postal and Customs service is one of the worst in the world. Just google Italian Post etc and you'll see a lot of vendors will not mail there since the risk of package loss or delay means that many customers (I've had it happen) will lodge a complaint with paypal etc for shipment loss.

I do ship to Italy, but only if the customer agrees that the risk of package loss/delay is something they'll accept...

I've had shipments to Italy (simple padded envelope) take 5 weeks to be delivered and a package shipped the same day to say Germany is delivered within 1 week.

Connecting a driver and P60 Shell