How Do You EDC Your Aleph?

For those of you that EDC your Aleph light, which method are you using?
K

EDIT: I corrected the above to read that a Aleph3 works with a RipOff CO-130 but the flap barely catches.
B

Aleph 2 on E2D Defender body with McE2S in a Z54. Clipped to L front pocket. I replaced the short clip with a long (M2) clip for a more secure hold.

Location
Land of Tulips and Philips

Aleph3-1x123 on swivel belt clip. Aleph2-1x123 in pocket. And a bunch more all over the place! /ubbthreads/images/graemlins/nana.gif

Pockets in jackets or wests on the opposite side of my cigarrettes ...
bernie

Swivel clip on belt. The only way to fly.

I have been thinking about Super-gluing one to the side of my head for convenience though.

My EDC is a Special Aleph1 NG-1000 HA-Nat + some tritium , using the swivel tab and belt-clip. 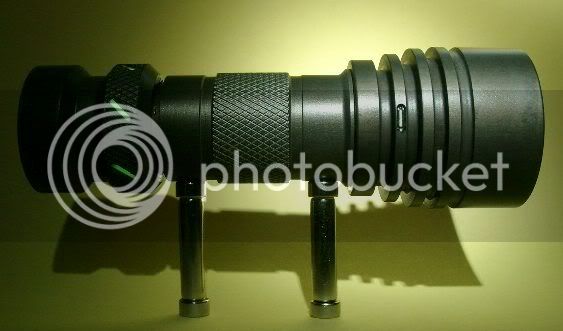 You are a lucky man, Marco. That is one VERY nice light. I EDC my Aleph 3 RA in a tube on my shelf /ubbthreads/images/graemlins/frown.gif until November 14th.

That's a kick-butt light Marco. What kinda runtime you get on high-power with one cell?

Ray,
As I recall, that light has a NG1000 so on high, I think Marco would get similar performance to the graph below: 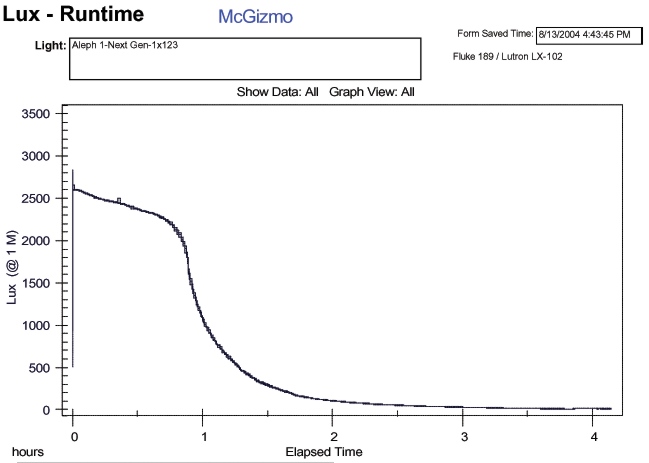 I never did a low runtime because they take to bloody long! /ubbthreads/images/graemlins/sleepy.gif

That particular light was "supposed" to be my light! /ubbthreads/images/graemlins/nana.gif

[ QUOTE ]
this_is_nascar said:
That's a kick-butt light Marco. What kinda runtime you get on high-power with one cell?

I'll do a run-time test ASAP ( as soon as i'll buy a new and more sofisticated Luxmeter , i hope tomorrow /ubbthreads/images/graemlins/grin.gif ).

you go on using the wrong light-meter /ubbthreads/images/graemlins/nana.gif ! You should use your 2nd light meter that one that give higher readings because i think that those are right , i think that your LX-102 is "pessimistic" i have 2 lightmeters that give me higher lux reading for the NG-1000 at 1 meter using one 123 batt.
Tomorrow i'll buy a more expensive light meter ( at my local electronic shop ) just to be sure of my theory /ubbthreads/images/graemlins/grin.gif

By the way i experimented ( using the same 123 batt ) higher current using the NG-750 then using the NG-1000 , how is that possible ??? /ubbthreads/images/graemlins/confused.gif

C
How do you carry your Aleph?

how do you use your Mule?
2

How do you use your PD lights?
2