How's The Weather There ?

SCEMan said:
Days in the low 40s, teens at night. Beautiful when the sun's out. View attachment 34724
Click to expand...

WOW! What a wonderful place to live!

Chauncey Gardiner said:
WOW! What a wonderful place to live!
Click to expand...

So glad we joined our daughter & family who moved here. Like turning the clock back 50 years from our life in Crimefornia!

Cold for this time of year, but oh so beautiful! 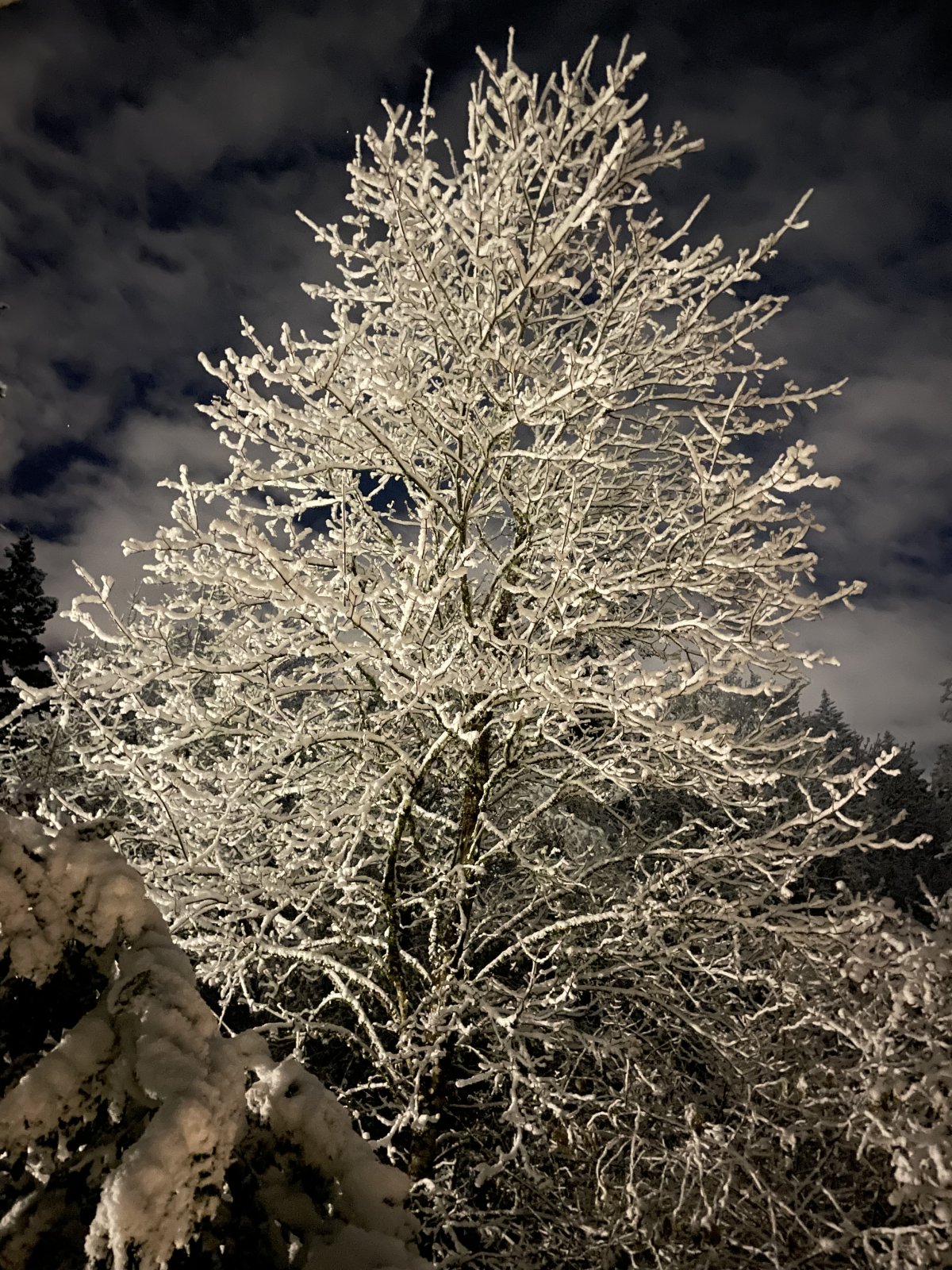 The picture was taken at 10:26 pm. The clouds were not visible. iPhone 12 is awesome. 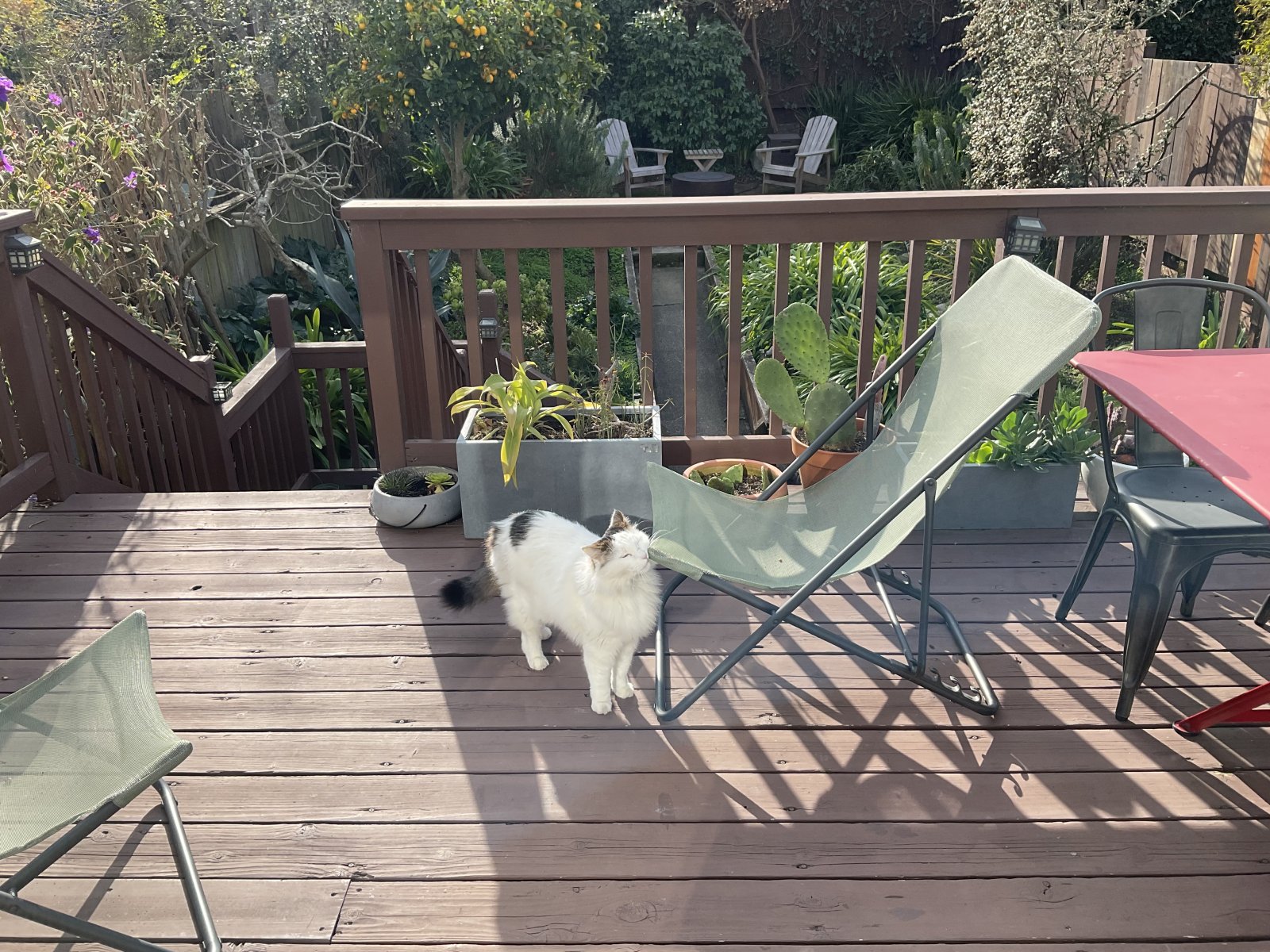 Took a drive around the neighborhood. Gonna be a white Christmas

Day 2 of the blizzard. 25MPH winds, blowing and drifting snow and reduced visibility. I'm glad that we filled the feeders earlier this week. It will help the cardinals, woodpeckers and juncos survive the storm. 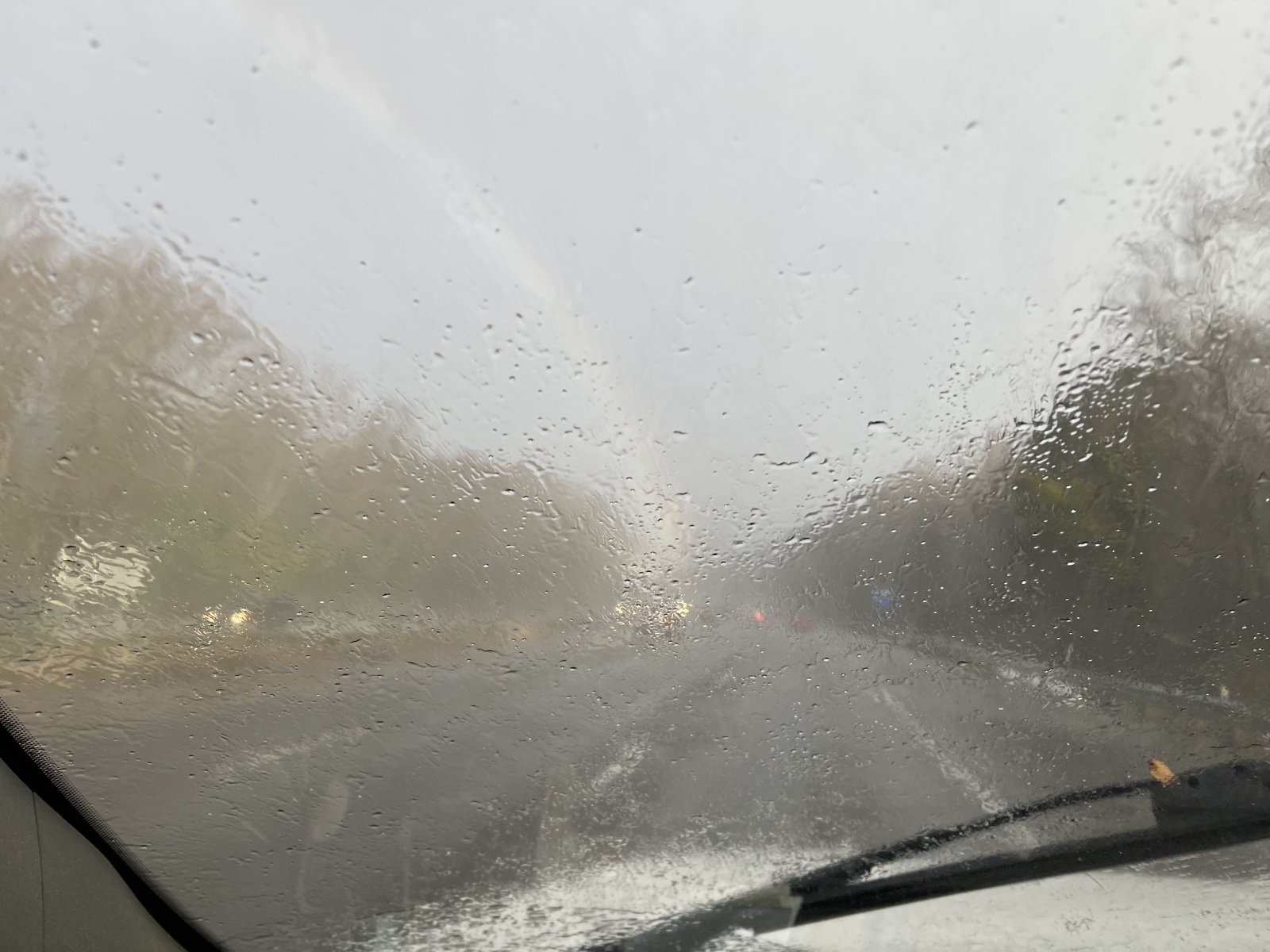 Morning commute involved a summer-like storm collide with Jack Frost's special forces when all at once a really bright rainbow appeared. It would have been sureal if it weren't so sketchy driving in it.

We got an artic front that moved through the PNW, so the roads are covered in snow and ice. 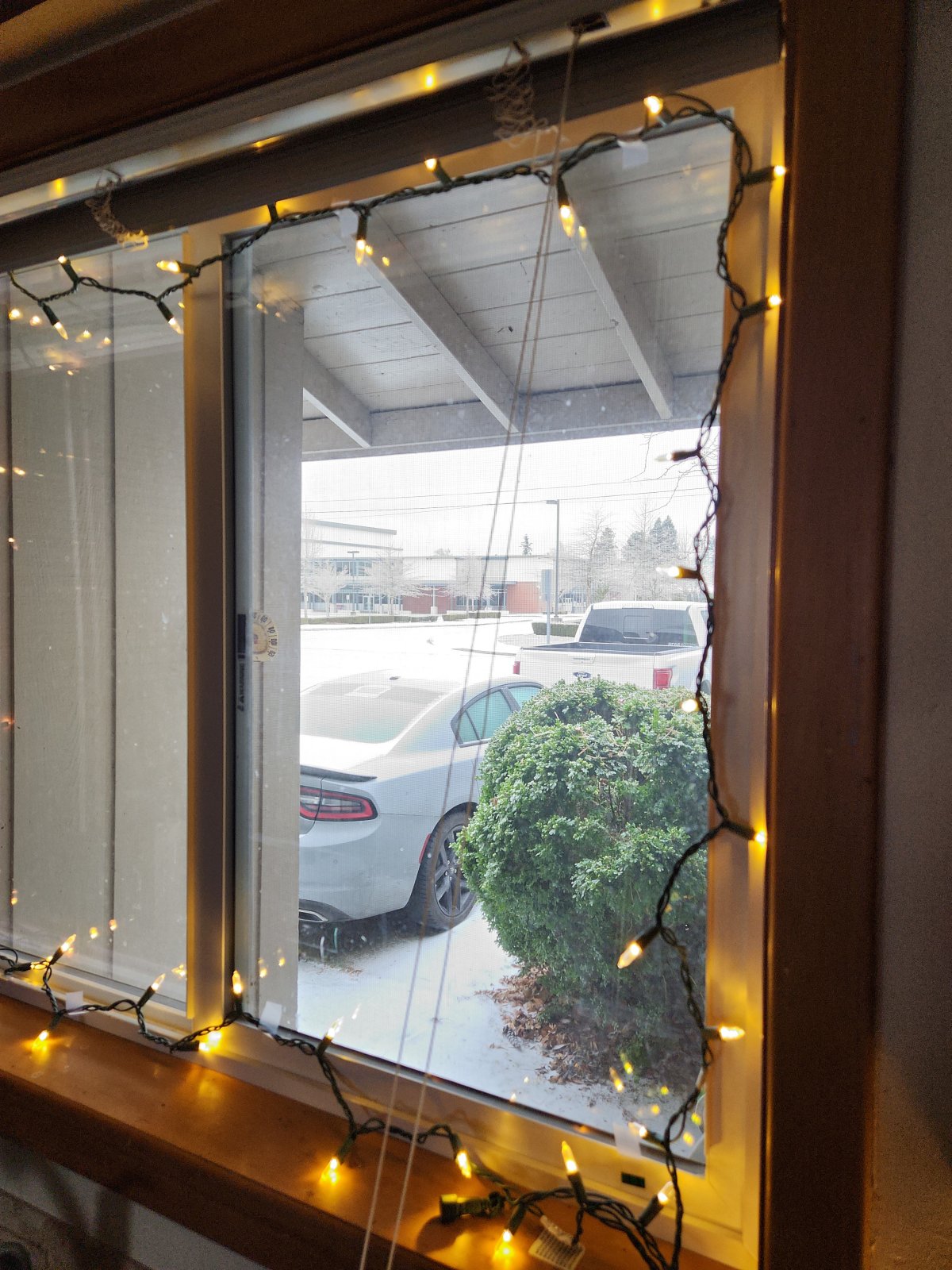 All I can do is pray for those who are in the mid west and suffering with -30 windchills.

I told my daughter, that if we decide to go to my son's house tomorrow, that we should all bring long johns, or flannel/fleece pajamas, incase we need extra layers, because we are stuck/stranded in our vehicle.

In this kind of weather one should dress like he will be walking in it, and take the layers off once in the car. 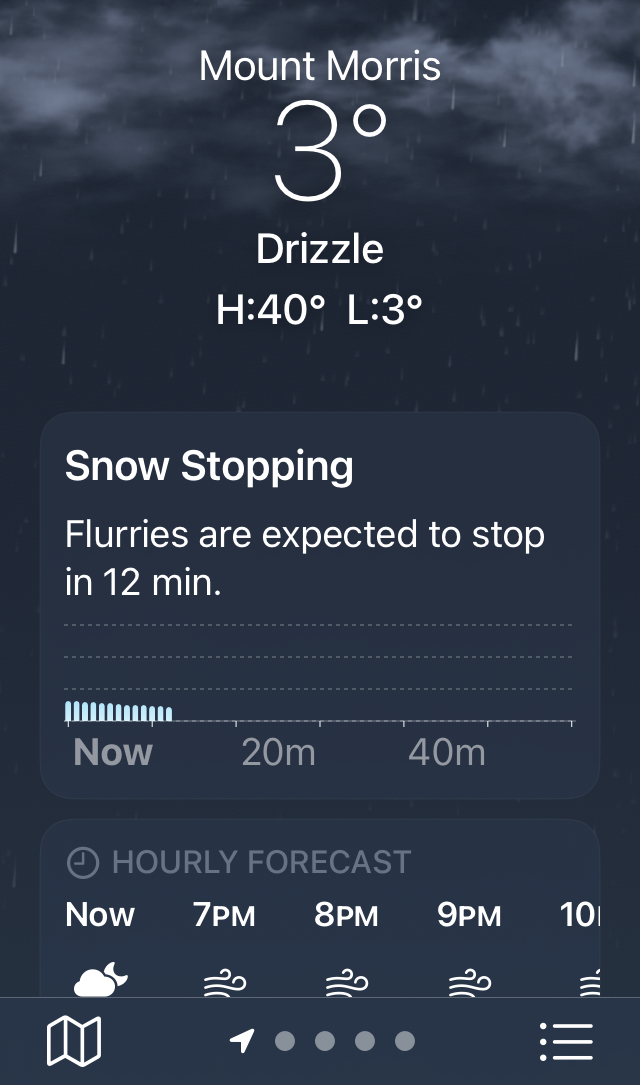 Very windy but thankfully the rainstorm stopped several hours ago.

NYC currently 16 F with 25 mph winds making for a windchill of -3 F.
I hope that all of the NYC homeless are able to get into a heated location.

We're dealing with a minor amount of freezing rain. 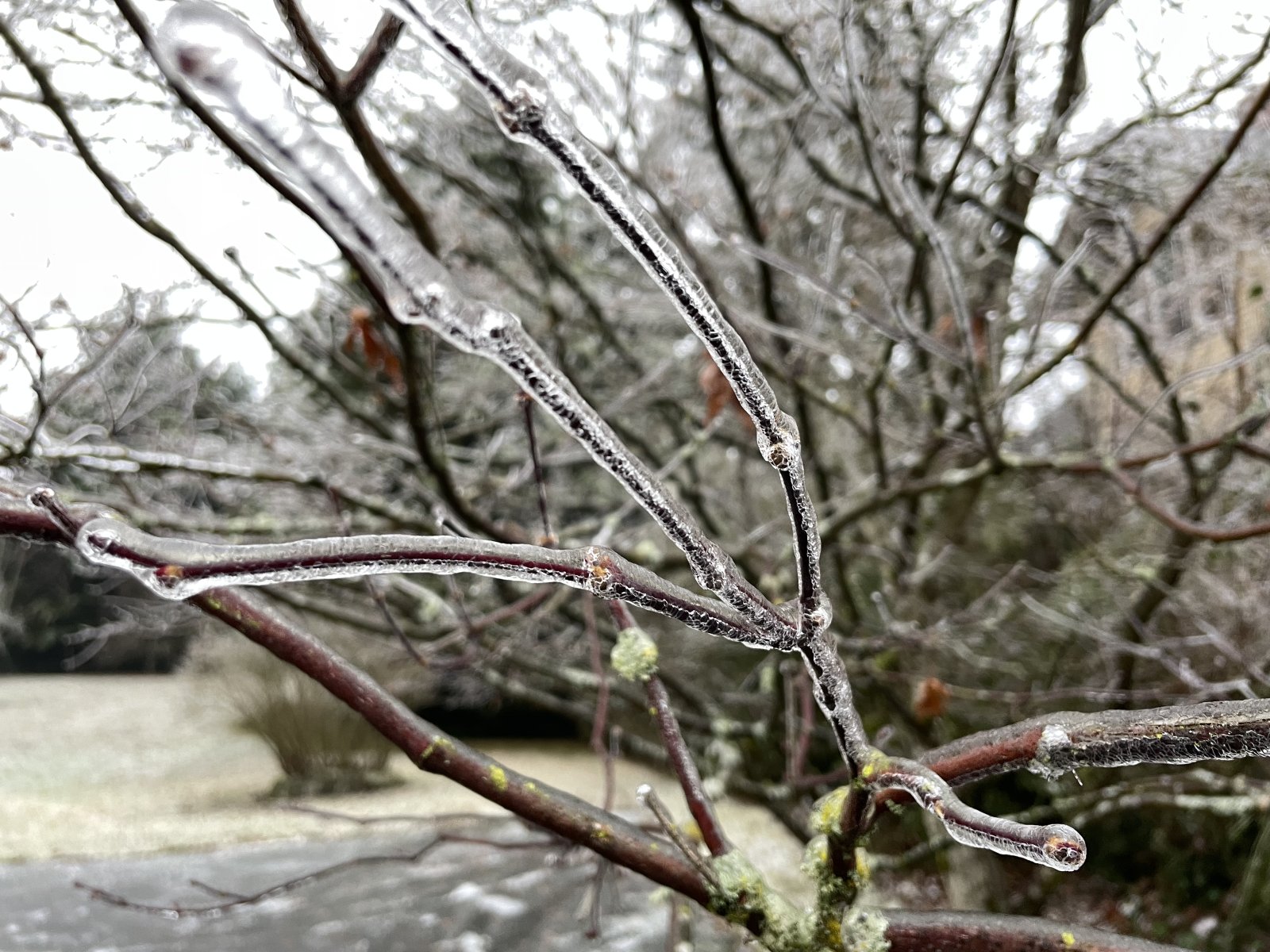 Hands down, my least favorite weather.

This was the coldest day we've had here that I can ever remember. I think it was about 5 degF for most of the morning, strong winds 15 mph but gusting higher. It stayed about 8 deg most of the day it seems, and now the local weather station is reporting 10 deg.

Last night when I went to bed, the electronic thermometer I have in the room said 58, and when I woke up, it was 52, so that room lost about one degree per hour from about 12am to 6am. (I normally don't use the central heating unless it drops down to 50 inside; small portable heater handles the bathroom). When I got home (early) at about 3:30pm, it was 49 deg inside so I put the heat on 51.

Wasn't bad at all in the car going to work, since we had a delayed start time so my car got a little bit of sun before I left. At work though I was getting the full wind blast in the parking lot. It was like walking into an industrial freezer with the blower fan on high. Actually, I have been inside of one of those before, and I think it was only 14 deg, so this morning was worse than that.

Any exposed skin hit by that wind felt like someone was pressing a block of ice against it. I would've needed a full ski-mask deal for my head rather than just the coat's hood if I was going to be out in that for any length of time. The wind forced its way in and around inside the hood unless I had my back to it. My upper body felt insulated enough, except that I hadn't tucked in my shirt, so as I bent down to pick stuff up, the wind got in even under my hip-length outer coat and felt like someone pored ice-water down my sides. I had long underwear and jeans on, but still could've used an outer shell layer for my legs since they still felt pretty cold.

All in all I would NOT have wanted to spend very much time out in those conditions today. Y'all that live with conditions like this every winter are a tough breed!

Hands down, my least favorite weather.
Click to expand...

Chaunce, biter cold is good for your dogwood and fruit trees.
Today we hit 67° Times like this across US, I'm happy to be in warmer climate 😎

knucklegary said:
Chaunce, biter cold is good for your dogwood and fruit trees.
Today we hit 67° Times like this across US, I'm happy to be in warmer climate 😎
Click to expand...

Oh yeah, that's why there are so many "Snow Birds"
It looks like this year, I won't be one, but perhaps next year. Fingers crossed.

knucklegary said:
Chaunce, biter cold is good for your dogwood and fruit trees.
Today we hit 67° Times like this across US, I'm happy to be in warmer climate 😎
Click to expand...

Our forecast for New Year's is about 67 also. This region tends to bounce around a bit as far as temperature swings.... but this is kinda ridiculous! 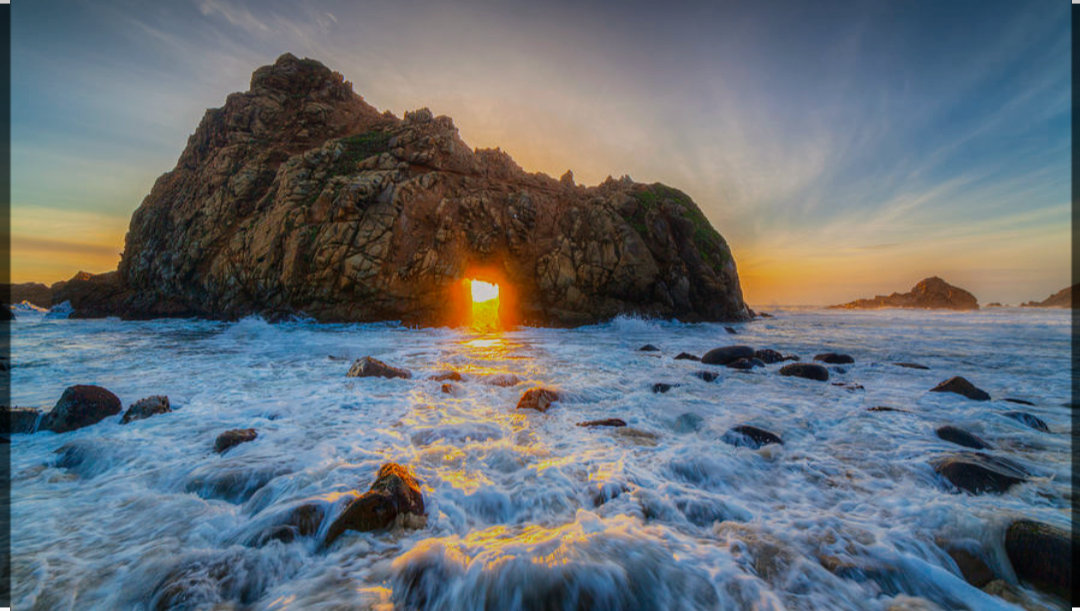 Alone, Abandoned, Anomalous. Have you ever “been there?”

anyone else here shave there head or cut there own hair?
2 3

health precautions to help a horder clean there home?
2