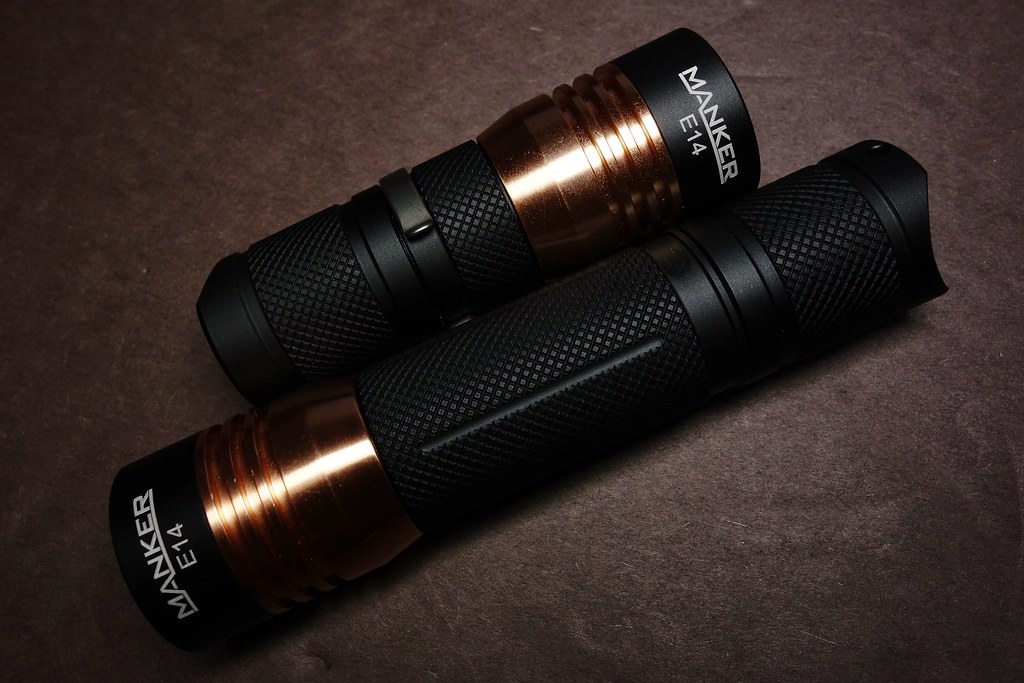 At the heart of a well-made flashlight sits the driver that provides the UI that controls the output levels and modes. More often than not, it plays a huge role in one's purchase decision and subsequently whether it's retained in the collection or flipped. Output matters little if the UI is clunky or difficult to use. To draw an analogy, you can have a V6 engine pumping out gobs of HP but if the transmission creates abrupt shifts or the ratios are not well spaced, it can totally ruin the driving experience.
One of the exciting features of Manker's latest release, the E14, is that it boasts four emitters (XP-G2 or Nichia 219B), however, just as equally (if not more) exciting is that it utilizes the well regarded A17DD-L FET+1 driver (AKA BLF A6). It's an advanced driver but easily mastered once one becomes familiar with it. It's also the first driver (in a non-ring control light) that I'm aware of that allows one to transition the output up or down obviating the need to cycle through all output levels.
Couple all this in a package that’s sized on par with most 1 x CR123 lights and touting a minimum output of 1400 lms for the 219B or 1600 lms for the XP-G2 (albeit for limited duration) and it beckons to be a shoe-in for the “Just buy it now!” category but might there be anything that could tarnish that recommendation? Let’s see shall we?

PACKAGING & ACCESSORIES
The E14 arrived nestled in ample cushioning within a cardboard box with a slip-off sleeve: 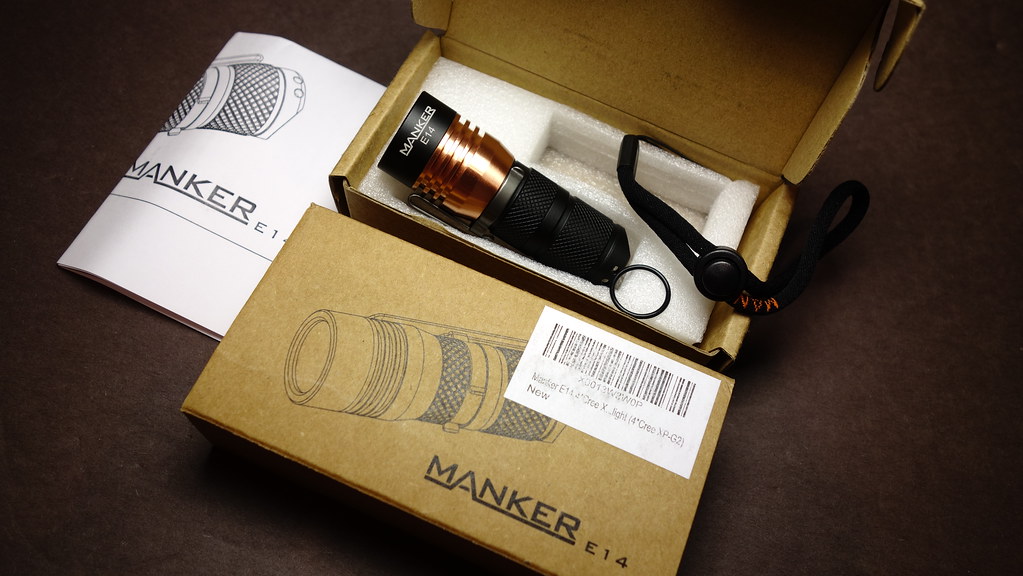 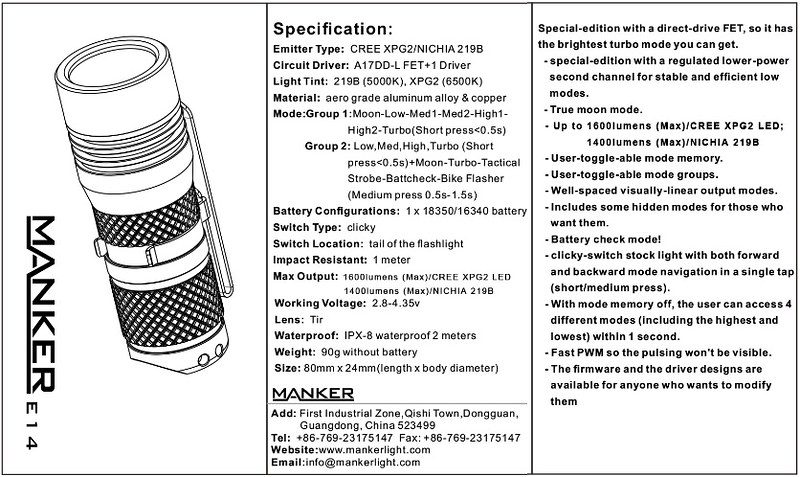 DESIGN & FEATURES
The business end features a TIR optic that is internally-formed like the 4-cell stage of embryonic development: 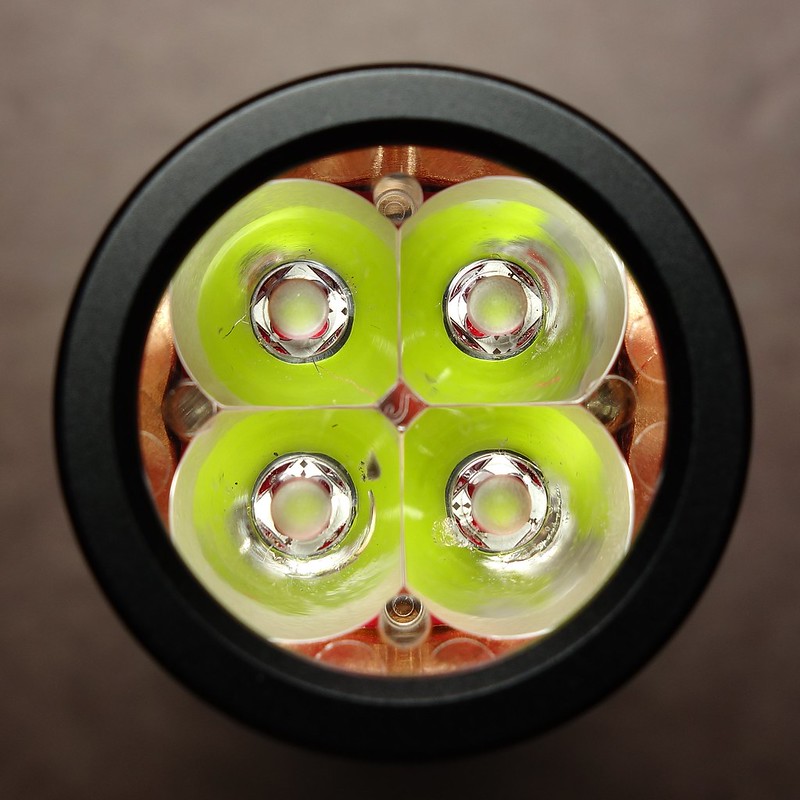 It hides the quad emitters that comes in two flavors and corresponding tint; 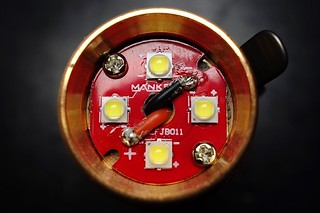 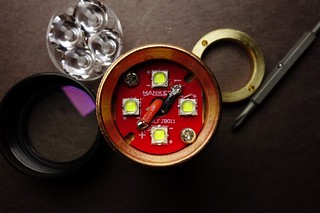 The bezel is flat with no crenelations and features the company name and model that is laser engraved around the circumference. There is nothing to denote the version of the E14 so if you own both, you'll either need to turn each on or find some other way to distinguish them. 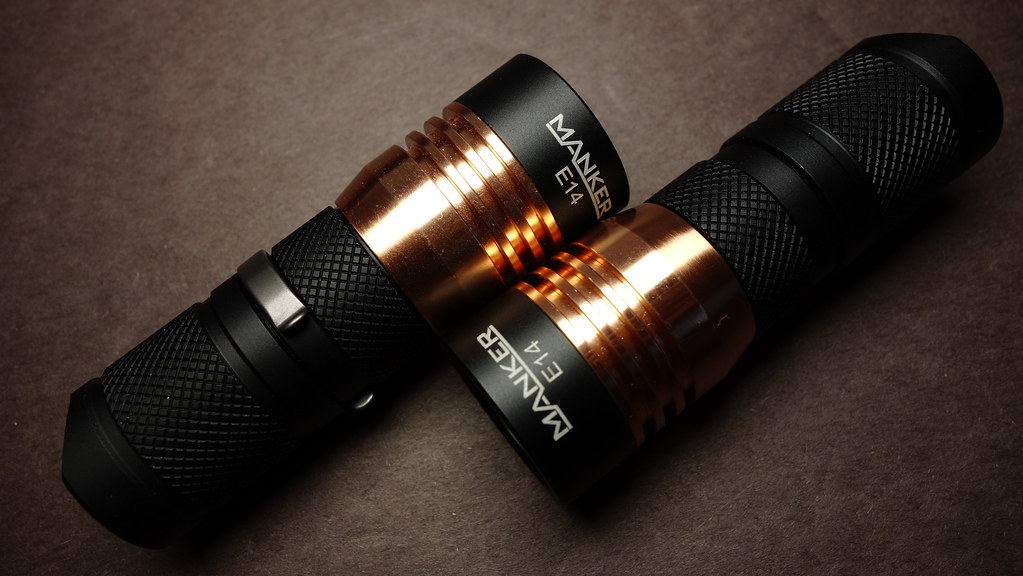 Aft of the bezel is the all-copper “throat” with two fins which provides much needed heat-shedding abilities: 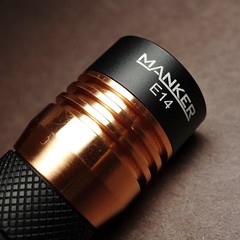 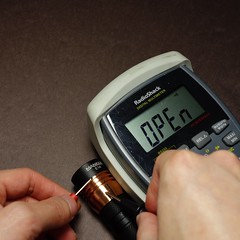 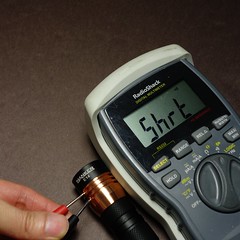 The outer surface seems to have a non-conductive coating applied as I get an OPEN reading when testing with my DMM but the inside of the fin isn’t and I’m able to get a SHORT.

The tube features mild knurling and a groove for the clip. Springs on either end allow it to accommodate a good range of batteries: 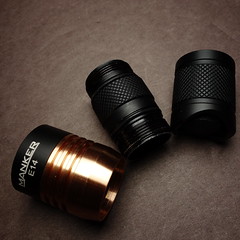 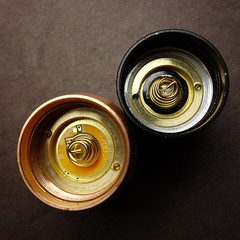 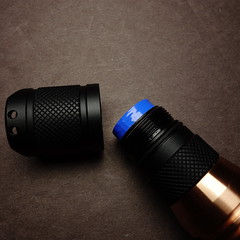 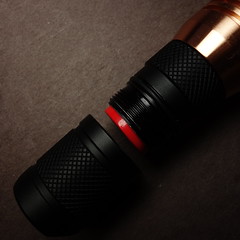 The threads on either end are fully anodized allowing the light to be locked out: 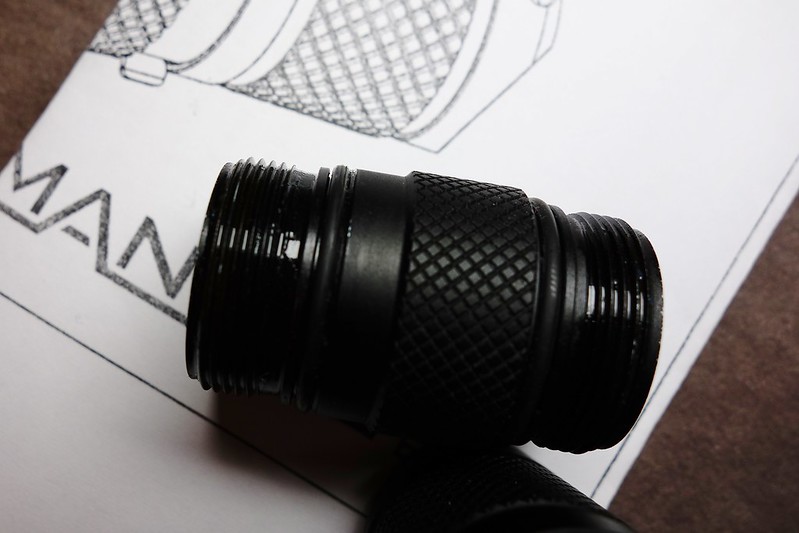 Though the threads aren’t square-cut, they came greased and operate smoothly. However, as is the norm in the industry, the underside of the o-ring wasn’t greased (if you don’t understand the significance of this, speak to me after class… ;o))

The tube is NOT reversible since the head side (side away from the groove for the clip) has about one less rung of thread and won’t be able to make contact w/the internal mating surface of the tailcap:
[2 PICS showing reversed and non-reversed] 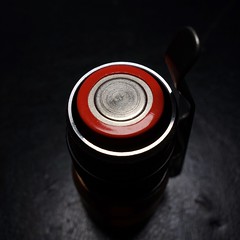 There is no spacer included to prevent R/CR123 batteries from rattling, however, I had to shake the E14 quite vigorously in order to induce any rattles. Furthermore, given the current the E14 can achieve, I wouldn't recommend using them anyways. You could go with an IMR 16340 but the runtime would be drastically short on the higher output levels.


The optional 18650 tube features 5 evenly spaced grooves carved on the side that are not found on the shorter tube: 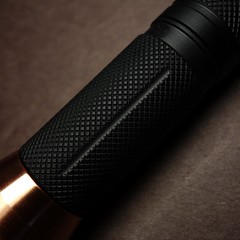 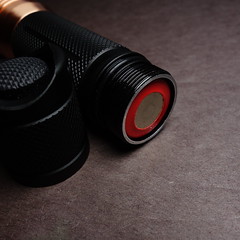 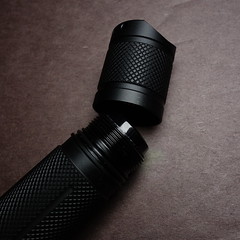 However, I feel the E14 loses its charm in this form factor and short of this review, I doubt I’ll be using it much: 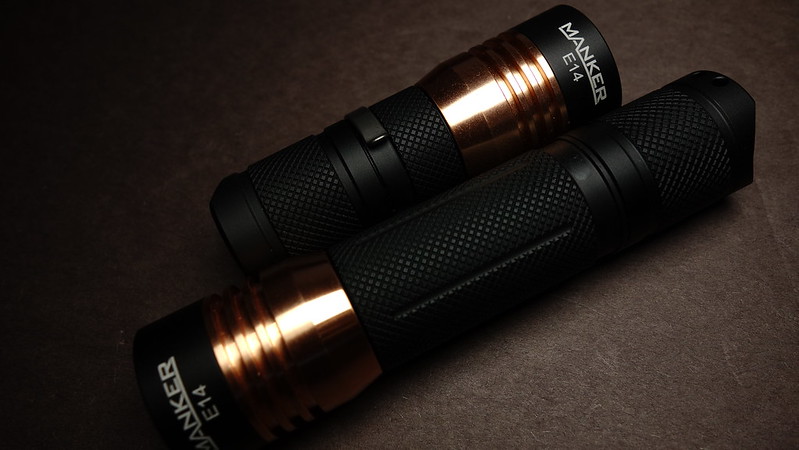 As with the short tube, you can NOT reverse mount it as the head side also has one less rung of threading:
[2 PICS showing reversed and non-reversed]
Finishing off the light is the tailcap that features two guards that help prevent accidental activation of the forward-clicky switch and also allows the E14 to tailstand and be used in candlelight mode:
[PIC: TAILCAP FLARE ] 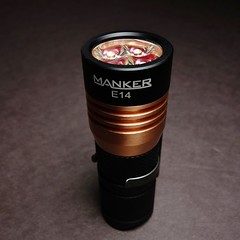 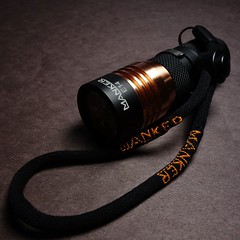 There are two holes that one can attach the included wrist strap to.


The clip allows deep pocket carry and is reversible so one can attach it to the bill of cap for use as a makeshift headlamp: 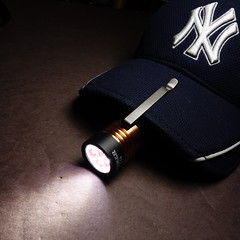 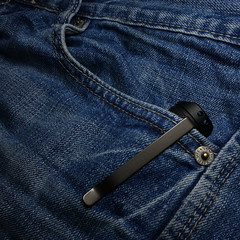 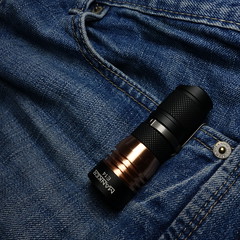 It provides decent tension force so should reduce chances of slipping off.

NOTE: Written review in progress, please check out in-depth vid above for now...
=======
Disclosure: 219B version provided by Manker for review, XP-G2 version purchased for personal use.
Last edited: Jun 18, 2016

Thanks! Looking forward to it.
H

Nice video review. I couldn't resist ordering the Nichia 129B version of the light when I saw that GearBest has them on a flash sale for $39.99.

Now I just have to figure out which 18350 batteries to get.

Great vid, thanks for sharing 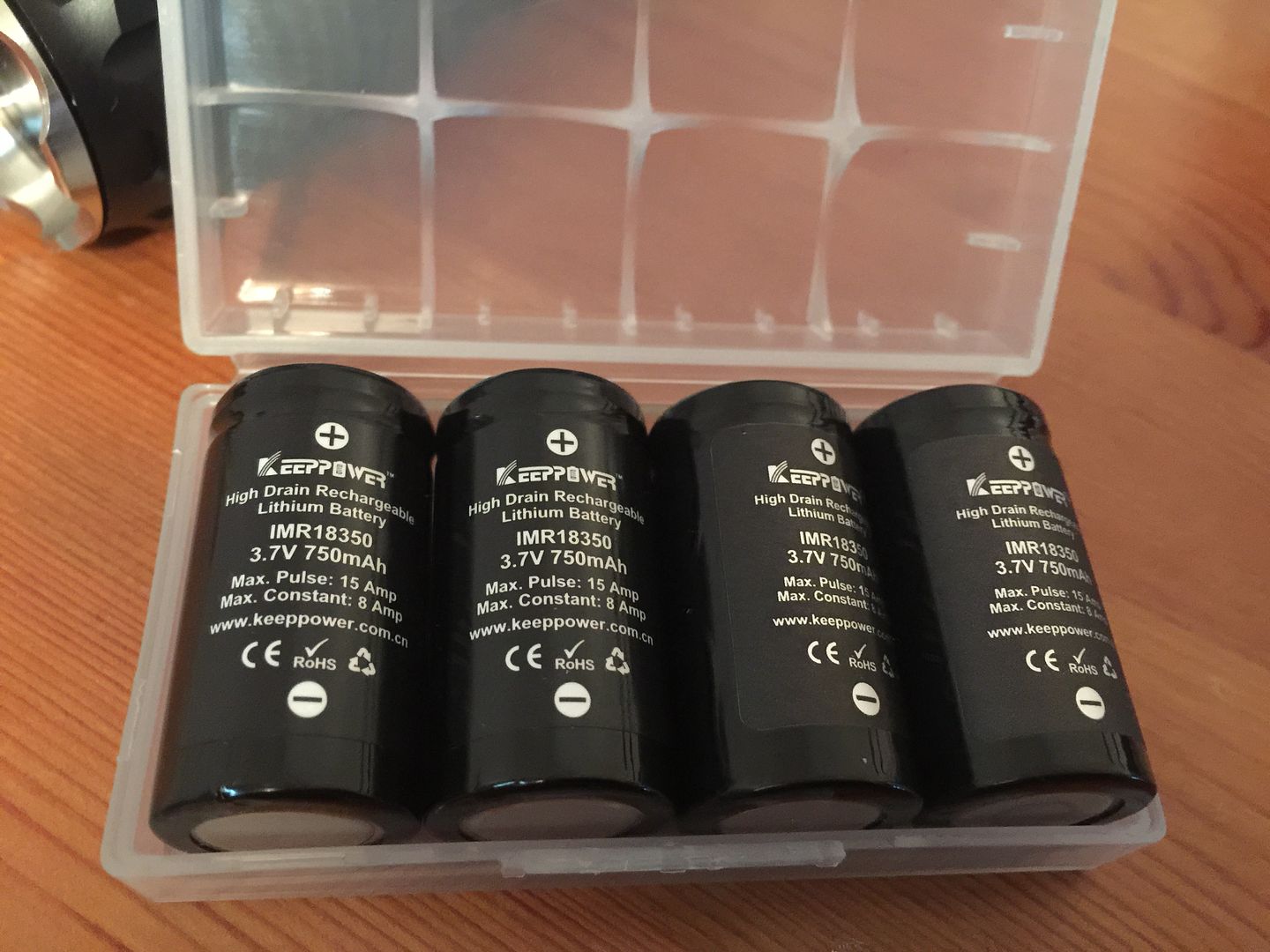 Thanks for the recommendation. I ended up going for the Efest IMR 18350 700mah 10.5A buttons top battery from Liion Wholesale.

I hope that that they have enough umph to run the light. If not I will pick up some KeepPowers. I have some KeepPowers in 18650 and they are great performers. I am going to pick up the extension tube as well so I can run it with some 18650's. I am really excited to see the difference in the Nichia 219B emitters and their color rendition.

Do you know if this light is exactly the same as the S41,which BG sells ?I ask,because I have already bought one S41 with XP-G2.
S

The Astrolux s41 and Manker e14 are the same light
A

This is very tempting! Really the only thing holding me back is deciding on whether to buy the one that rhymes with "wanker" or the one that sounds like a personal lubricant.

I have 2 of these. I broke my Lens, dropped it from putting in my Pocket. GEARBEST says that it will not replace. Also, they don't sell parts. Anyone know where to get a replacement Lens for this light?? might get 2 one for backup, if not expensive.

Blueman said:
I have 2 of these. I broke my Lens, dropped it from putting in my Pocket. GEARBEST says that it will not replace. Also, they don't sell parts. Anyone know where to get a replacement Lens for this light?? might get 2 one for backup, if not expensive.
Click to expand...

Try contacting Manker directly. They have been active on the forum and are coming out with some innovative lights. Good luck!
H

Thanks for the review.

How do you program to turn on at high?
A

hatman said:
Thanks for the review.

How do you program to turn on at high?
Click to expand...

I'm not aware of any way to do that other than enabling memory mode and turning off while in high mode so the next time you turn in on it's in high mode again.
H

Though the threads aren’t square-cut, they came greased and operate smoothly. However, as is the norm in the industry, the underside of the o-ring wasn’t greased (if you don’t understand the significance of this, speak to me after class… ;o))
Click to expand...

Hi, Nice review! I was wondering about this though, why?

Blueman said:
I have 2 of these. I broke my Lens, dropped it from putting in my Pocket. GEARBEST says that it will not replace. Also, they don't sell parts. Anyone know where to get a replacement Lens for this light?? might get 2 one for backup, if not expensive.
Click to expand...

Try flashlightlens.com. They carry a lot of different types, diameters, and thicknesses of lenses. They also have a nice table with most of the more popular lights listed so you can find which diameter and thickness to get. Good luck.
S

It's a lovely little light indeed - I have the Nichia 219B version, and I love it a lot, but Manker still has to learn from the biggies (Olight, Nitecore, ThruNite...).
The "oomph" factor is bigger with the shorter tube, but since I want to actually use it during my walks, I've ordered the 18650 tube, which would better be part of the package, not a separate order (like it's part of ThruNite's Neutron 2C V2).

turboBB's review is nice, and BudgetLightForum has a few more in-depth reviews (with lumen measurings, beamshots), but neither of them has runtimes measured using 18650 battery.

I had a few walks using the 5th mode of the 7 (high1 or MedHigh), and it took about 2.5 hours to deplete the battery almost completely (the light was still on, but it was a lot dimmer than before) - since I'm actually using it during my walks, I don't really care about the turbo, but I have to admit it's really-really bright.

On BudgetLightForum unknown00101 has made a nice review with lumen meterings, and he has measured over 2000 lumens using Samsung 30Q - and it's "only" the Nichia version, so it seems that the E14 doesn't really have too much regulations; if the battery provides more juice, it's a lot brighter. I don't want to kill mine, since I have LG HG2 batteries providing constant 20A discharge, and the turbo makes the E14 quite hot in a few (15-20) seconds, but it seems that I can use the high1/MedHigh mode for a while (over 1.5 hours), which is useful, since the med2/Med mode is a lot dimmer (according to unknown00101's measurings on 18650 the MedHigh has around 600 lumens, while 400 would be sufficient for me, and Med has around 170 lumens, which is too low IMO).

This flashlight has a lot of potential, because it has the BLF EE A6 firmware, so if you want to tinker with it, you can even adjust the brightness levels.

I love my Manker E14 with 4 Nichia 219B's, and I love the fact that it's so much different from any other lights I own (it's quite unique ), but a more precise voltage regulation would be better, as well as more evenly spaced output levels.
R