With the directions this thread has been moving in, I don't even know if this suggestion is OT or not, so I'm taking a chance.

I would be interested in trying to acquire more MN03, MN02, and MN01 lamp assemblies if there was a convenient way to use them on rechargeable cells. 1xLi-Ion is not driving them enough (except for being too much for the MN01), and 2xLi-Ion would flash them.

The thread seems to have a theme your suggestions coincide with very well, or at least to me it did.

Lumens factory has some good alternatives to the now rare SureFire modules.
Last edited: Jan 12, 2019
B

I use Malkoff's 2AA body with the MN01 and it works. A tight fit but able to screw body onto head.

I have seen you generously suggest such things before. What I don't understand, and with the greatest respect for you and your offerings, and with understanding you are only one man, only so much time, and speaking for everyone but supermod DM51 (who apparently has two handfuls of them), why don't you just make and sell more, like ten times as many as before??!What good can it do you now the extremely limited initial and only offering of Sunlight G4 P60 sockets has long ago sold out? Because I want one, or two. and I bet everyone with a 6P or compatible wants one or two. Exceptionally cool product! Please strongly consider starting a new interest thread and see just how many new customers there might be.
Click to expand...

While there is so much that I wish to say (and have in the past) regarding this exact feeling, I will tone myself down because I have inadvertently pissed off some members in the past with my thoughts on the matter... I'm not calling anyone out here...

I agree 100%, nothing aggravates me more than when people (esp. in the incan threads) recommend products that are literally 99% unobtainable; and have been for YEARS! Like why get our hopes up??

Now, specifically regarding the G4 D26 Sunlight.... I've been a member here since 2007(ish), I remember seeing the Sunlight when it was offered in 2009??? Man, I lusted for one... Had already spent $100's on FM parts, was saving up for one (or 2) in my lowly Security Officer job and knowing that there had been several runs of FM products in the past, did not worry about them selling out. Well..... Alas they did sell out, and were never made available again?!?! Such a popular product; still asked for in 2019!!!!!!!! Nope, never to be seen again....

I'll never understand it, and it's absolutely why I go ALL OUT on the few incan mods that are available today (THANK YOU TAD!).

But, that Sunlight man, just came and went so fast (at the time, today I would've been able to afford 4x as soon as they were available). What do I know though?? Seriously there HAD to be a reason from such a desirable product to just die off but I don't know it TBH.

My best guess, it was around the time LED was the new(ish) King and the demand at that exact time just went down the hole... Why sell something that has no demand (at the time). Yes, people were laughing at incan vs LED.

Anyway, I just wish when people suggested such things that they included a disclaimer like, "good luck finding one", just like an AW SoftStart... Still asked for today... Am I right??? LOL

And to end my rant I just want to say that it does seem like everyone that got a Sunlight is not letting it go, rarely see one FS.

But hey, now after all these years and with a pretty decent amount of incan fans; I think someone could make bank on another run of them..... I'd buy at least 3
N

1pt21,
I can empathize with your frustration; there are any of a number of former FM products that I wish he would make more of - and - trying to look at it from his point of view, he still has NOS of numerous custom parts that involved cost and effort that were made in very limited quantities, and have still not sold out. Trying to forecast the profitability of custom parts to an extremely small niche group has to be difficult as well, and even considering making more of them for what are now significantly discontinued items - I would not want to be in that position. Please understand that I am not trying to invalidate your opinion.

Oh man, i’ve got chills reading your posts 1pt21 and novice... everything i wanted to say, you said it. night.hoodie is also one of the few of us left who would sell a kidney just to get a hand on discontinued FM and AW parts...
Too bad nobody hear us

Bullzeyebill said:
I use Malkoff's 2AA body with the MN01 and it works. A tight fit but able to screw body onto head.

A 2xAA Rayovac Indestructable holds a P60 type unit very well. And dig this, a C sized head threads on it to. 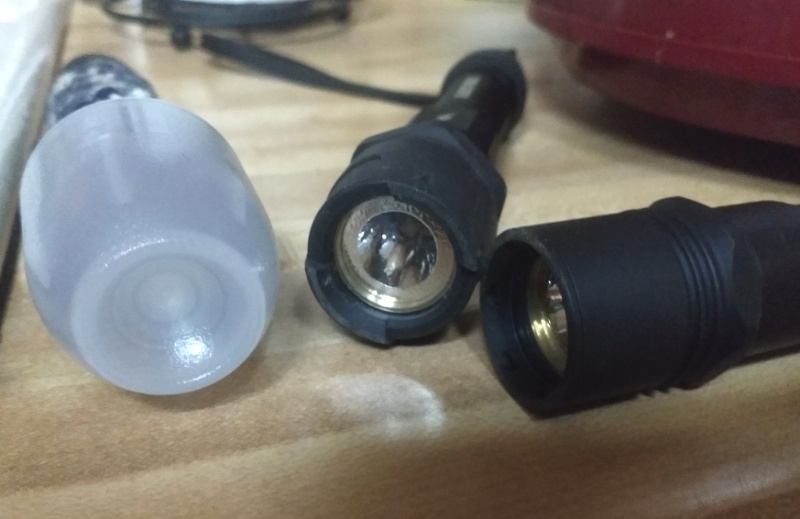 Left, a stock one with Fenix traffic wand, middle a stock head with an M31L and right an M31W in a SolarFarce 6P clone head. All work without any tricks or modifications.
No need for an E2C adapter.
Last edited: Jan 13, 2019

bykfixer said:
A 2xAA Rayovac Indestructable holds a P60 type unit very well. And dig this, a C sized head threads on it to.
Click to expand...

Where to get one Mr.Fixer? Not so simple here across the ocean...

Rayovac are called Varta in Europe.

Oh lord, so close and yet so far...with a lack of knowledge. Haha
Thank you! Never looked at them to be honest but since you mentioned that magic word “P60” my perspective is different now.

There was a thread here about the Indestructable when they first came out. I went to my local big box store and bought 3. Then went to the SolarForce site and bought an L2M kit with additional parts like a round 3p style head and some lenses.

When the order eventually arrived (that's a story in itself) I removed the Rayovac module and built a solarforce 3p looking contraption using half of the L2 body and round head. It was pretty ugly until Rayovac improved the Indestructable with a nicer colored beam. So it's now a 300-ish lumen number with a low setting that can be lego'd with a burnt P60 module using a Streamlight Strion bulb for a portable 6P looking output using a CR123.

The Rayovac got the oem L2M head and Malkoff M31W.

Now regarding those old really bright bulbs, in many cases they were not built for flashlight use but for microscopes and other scientific applications. So with enough perserverance they can be found at places folks wearing lab coats buy their stuff from.

novice said:
1pt21,
I can empathize with your frustration; there are any of a number of former FM products that I wish he would make more of - and - trying to look at it from his point of view, he still has NOS of numerous custom parts that involved cost and effort that were made in very limited quantities, and have still not sold out. Trying to forecast the profitability of custom parts to an extremely small niche group has to be difficult as well, and even considering making more of them for what are now significantly discontinued items - I would not want to be in that position. Please understand that I am not trying to invalidate your opinion.
Click to expand...

I can only imagine, ESPECIALLY being such a small operation.

Seems like I joined here at one of the biggest transitioning times of the flashlight world; incan stuff was still all the rage, and custom (cool) parts were being churned out regularly... Yet, LED's were also on the come-up something fierce; and here to stay this time.

AH well, at least we have this tiny little remaining sub-forum to vent

Say whattt? Did you desolder the blown bulb and plug in a Strion bulb or something?

I'm trying to figure out why I said Strion bulb when talking about a light I placed a Rayovac Indestructable module in but……a P60 module can be disassembled. The bulb is held in with a wee bit of glue. The bulb has legs that fasten one to one spring, the other to the other spring.

The Strion bulb comes with trimmed legs not long enough to fasten the the P60 spring(s) but if you can fasten about 15-20mm more wire to the legs you could conceivably work. Once you know what to look for it's not hard to figure out how to disassemble things.

Great, pic-- I see what you mean now, that doesn't look too bad.

I'll buy a generic P60 LA from the bay to see how it might be modified to host a bi-pin bulb. My only P90 still works thankfully.