We all want batteries that have the lowest internal resistance, highest capacity, protection, LSD / no SD, small, etc.

What we also need are batteries that can provide real time wireless info to external devices. This is not impossible. Think of a battery with a blue tooth (or other wireless connetion) to your PC or phone that provides real time info on:
- Current drawn,
- Current voltage,
- Capacity left,
- Low capacity warning,
- Average runtime left before protection cuts in,
- For car batteries, water level per cell,
- etc.

The info will only be transmitted while current draw is detected. Think of the endless review possibilities that will be in most of our hands. With appropriate s/w we can get real time graphs on our PCs and know how our lights are performing on the battery side.

in industrial SCADA control, these have been long in use through external sensor and controller.

TranceAddict said:
in industrial SCADA control, these have been long in use through external sensor and controller.
Click to expand...

Do we really need that?


Most of it you can know from the specs of the battery and the device powered by it. But an "average" user doesnt even want/need to know that. The tendency is to make things simple, not to over complicate them. So i doubt you will ever see that in batteries.

Will be great if we can generate standard test results for lights, graphs and all, without the need to connect test equipment. Some lights make it very difficult to measure.

Do you need a car full of sensors that can make it not to start compared to one that is very simple and mostly mechanical?

More thing that can get wrong and ruin the battery faster? I dont want lots of "features" in simple things.

SUDDEN DEATH!!! Not because of the light, but because the protection kicks in without warning. Some of these lights are highly acclaimed tactical lights.

I agree simpler is better, but in some cases there is merit in more complexity.

It all sounds possible to me. You just need to design the wireless hardware/software. Gathering that information has already been done before. Laptop batteries supply all that information using the SBS (smart battery system). Windows doesn't normally show you all the information...but lenovo's power manager does!

Check out this battery information: 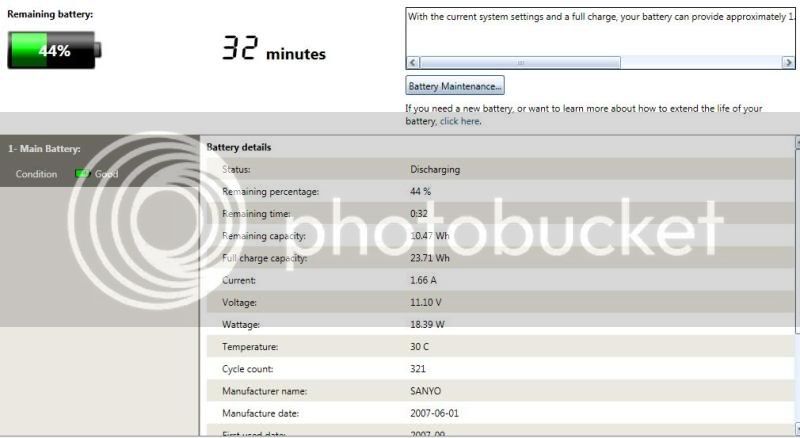 You cannot see all of it...but it also shows how much the battery has degraded since I got it. Used to be 56.16Wh....
It even shows time remaining to full charge! I don't know of any other laptop that predicts remaining charge time.

Since we're pretty much limited to standardized battery sizes, any space used for these features means less energy capacity for the cell. I'd rather see more advanced tech in the flashlights that can read the cell rather than losing capacity...and you'd only have to buy this expensive stuff once, in the light, instead of every time you buy a cell.


CampingLED said:
I have some lights that keep max brightness to the very end and then

SUDDEN DEATH!!! Not because of the light, but because the protection kicks in without warning. Some of these lights are highly acclaimed tactical lights.

I agree simpler is better, but in some cases there is merit in more complexity.
Click to expand...

I'd rather be able to tell the light which cell I'm using and then have it protect the cell instead of the cell doing it. Just my 2cent.
T

C-Beam said:
I'd rather be able to tell the light which cell I'm using and then have it protect the cell instead of the cell doing it. Just my 2cent.
Click to expand...

This makes a lot of sense. The device you're powering already has electronics in it, so might as well add one more IC for intelligent battery handling. By keeping the protection circuitry out of the cell, you lower cell resistance and maximize capacity. Plus, such a "smart" device can avoid sudden darkness syndrome by detecting the impending discharge state (since it knows what voltage or mAh usage point is discharged for that cell) and warning the user.

The question is, how do you encode cells so that devices know what chemistry they are. 35mm film cartridges uses a very inexpensive yet effective system by putting conductive patterns on the side of the film canister; contacts in the device sense these patches which encode the film type. Since cylindrical cells can be rotated, you'd have to use rings instead of squares but you could still use the same idea. Of course, if you want to encode more data then you need a lot of rings... too many rings and you won't have room for written words for humans to read.

Another option is a contact-ID. Wireless RFID is too expensive but you can do the same thing WAY cheaper using just two conductive rings on the cell body. Contact-ID can store several dozen bytes of ROM data that a device or charger can query the cell for: chemistry (NiCd, NiMH, Alk, Li, etc), total capacity (mAh), self-discharge rate, max discharge rate, cell resistance, and maybe a few other bits of information that would be useful not only for devices but also for chargers. I have to believe memory chips can be made thin and flexible (curved) enough to be embedded right into the plastic wrapper that's already on the cell anyway.

Add a couple bytes of NVRAM to your contact-ID and you can also record the number of charge/discharge cycles as well as track the most recent amount of mAh the cell provided on it's last cycle (which changes over time and is different from the rated capacity). Imagine the charger knowing exactly how many mAh it can cram in the cell, even as the cell ages and degrades! Probably too expensive for non-flashaholic consumer cells, though.

In reality a hybrid system would probably work best: passive ID rings for throwaway primary cells (to keep unit costs down) and contact-ID ROM for rechargables.

Nice thing about these smart cells is they would be entirely compatible with legacy devices and legacy cells could still be used in smart devices (the device will just have to guess, or default to failsafe).