UPDATE Aug 11, 2008:This light is no longer available, and has been replaced by a new IBS version of the 1AA Jet-I PRO. It is reviewed alongside its 2AA sibling in my review here. 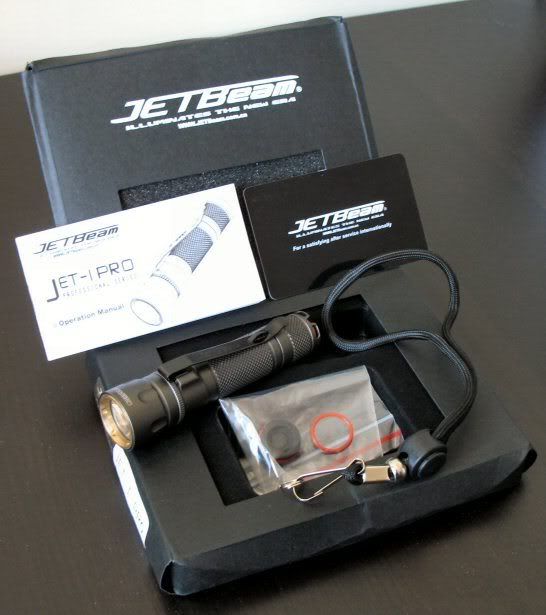 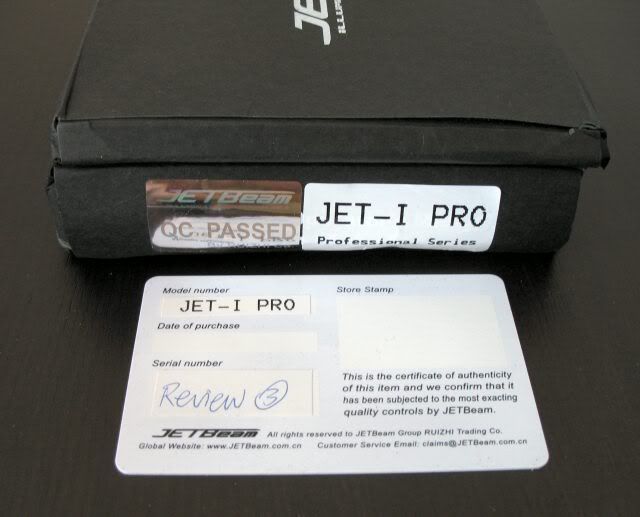 My review sample came in a thin cardboard box with JetBeam logos, and some light foam insulation inside (frankly, I’m surprised the box survived transport as well as it did, as it came packaged inside a regular bubble envelope).

Inside, you’ll see it comes with warranty card, manual, wrist lanyard, and spare parts (o-rings, tailcap cover) – and of course, the light. Quality of the lanyard seems pretty good. You’ll note my sample is identified as “Review 3”. 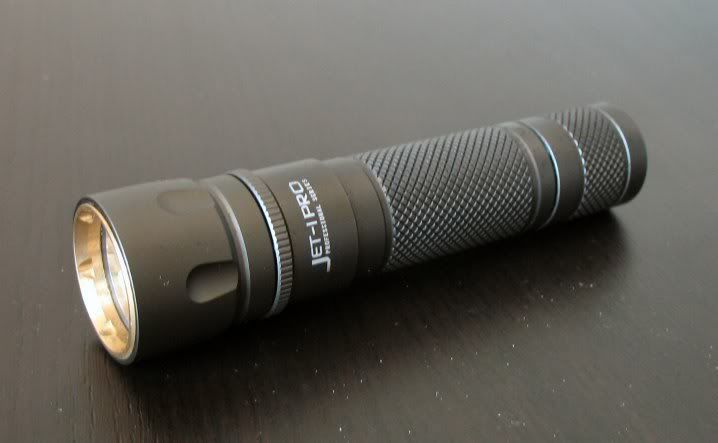 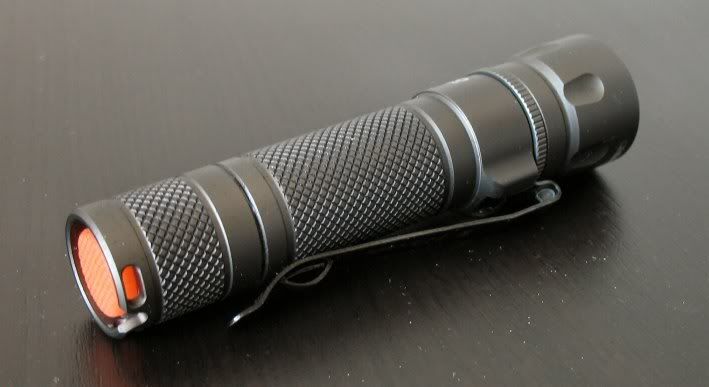 As you can see, exterior styling is very nice. Light comes in a dark grey HA (type III) finish, similar to the JB C-LE. The metal clip is detachable (with some force). Knurling is not overly aggressive, but it is slightly more raised than most Chinese-made lights. 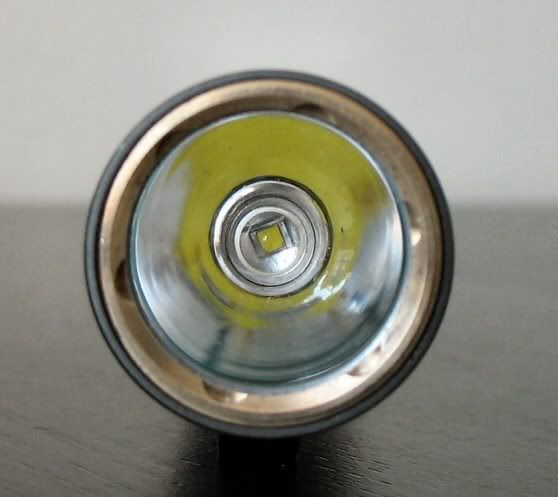 As you can see from the business end shot, the Jet-I PRO uses the “silver” version of the new Cree R2 emitter (i.e. the area outside central die is silver in colour, instead of the standard Cree yellow). My understanding is that there are no output differences between the silver and yellow versions, and these simply reflect different manufacturing plants. However, there may be some tint issues (see my Build Quality section further down for a discussion). 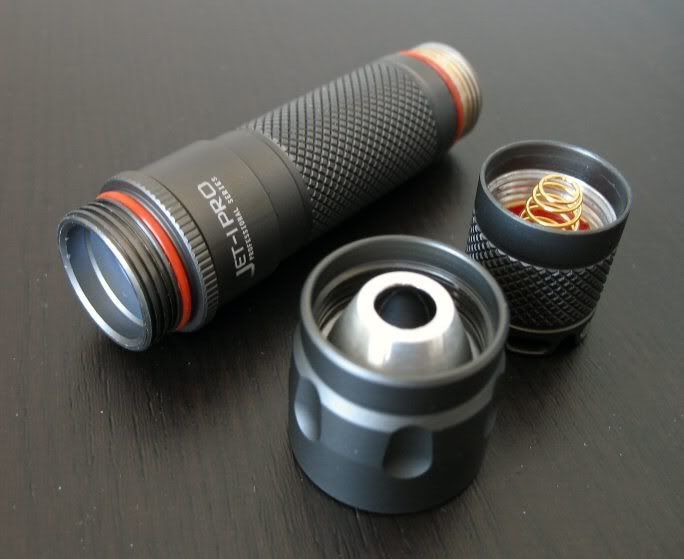 The light engine can easily be unscrewed from both the body and the head/reflector, opening up the possibility of easy upgrades (should JB provide upgrade modules). Like my JB MkIIX, there is a spring at the base of the light engine (i.e. at the positive battery terminal) so 14500s should not be a problem. Tailcap and switch are similar to MkIIX and C-LE v2. Note the presence of square screw threads, a favourite with machinists (and rare on flashlights). Note the brassy/gold-coloured coating on the inside battery tube and contact threads (apparently for some sort of anti-oxidizing effect, similar to the EDGETAC NiteCore DI). 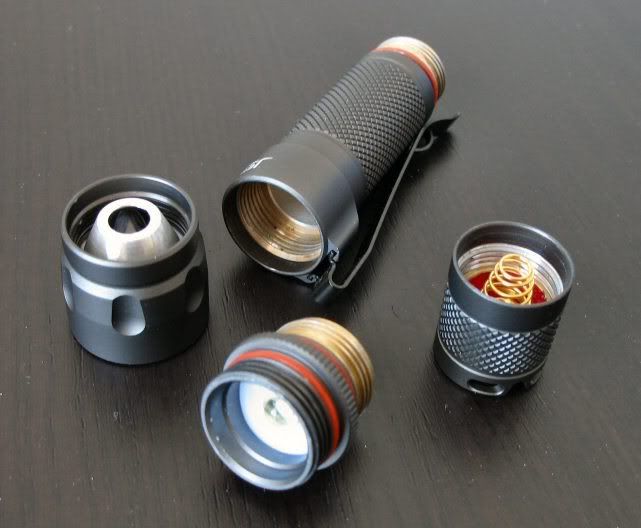 Testing Method: All my output numbers are relative for my home-made light box setup, a la Quickbeam's FR.com method. My relative overall output numbers are typically similar to his, although generally a little lower. You can directly compare all my review graphs - i.e. an output value of "10" in one graph is the same as "10" in another. Throw values are the square-root of lux measurements taken at 1m using a light meter.

Yes, you are reading the graph above correctly - Med mode has both lower output and lower runtime than Hi on 14500. JetBeam is aware of the issue, and plans to fix the circuit for the next batch of lights produced.

Although I didn't show it in the table, 2650mAh NiMH and alkaline have very similar initial output and throw as the Sanyo Eneloops.

JetBeam confirms that the light uses PWM, but the frequency is high enough that I can’t detect it with my setup, or notice it in everyday use.

User Interface:
I must say, it’s a welcome change to find JetBeam making the mode switching so straight-forward. No more complicated series of modes, much simpler in comparison to their earlier lights. :thumbsup: 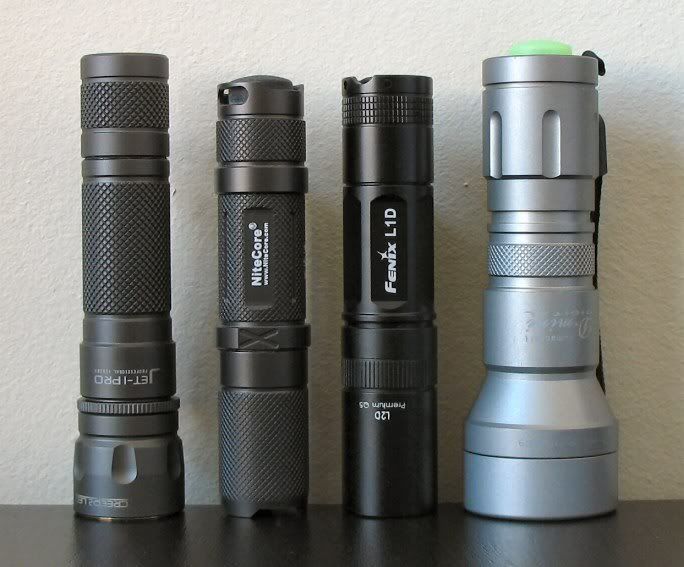 The Jet-I PRO has a tighter hotspot than the other 1AA lights, thanks to the bigger reflector. It is also a bit “ringier” due to its smooth reflector (for maximum throw). Tint on Hi is a premium white, slightly warm (but see discussion below for low modes).

Frankly, I think a better light to compare to is the CR123A-based LumaPower Dmini. Below are comparison shots to my Q2 version of the Dmini-D, both lights on AW protected Li-ion rechargeables (14500 for Jet-I PRO, RCR for Dmini-D) 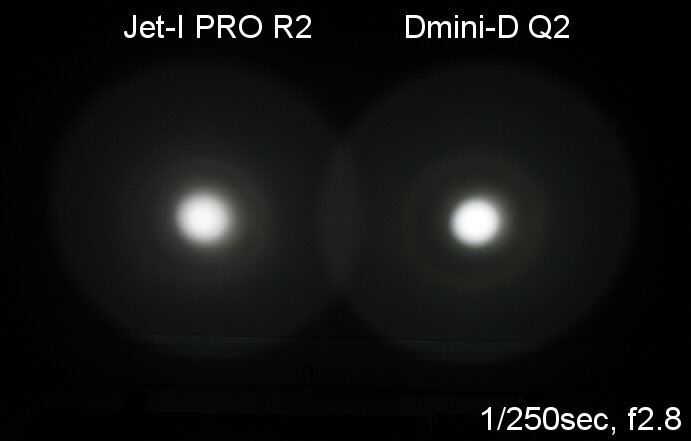 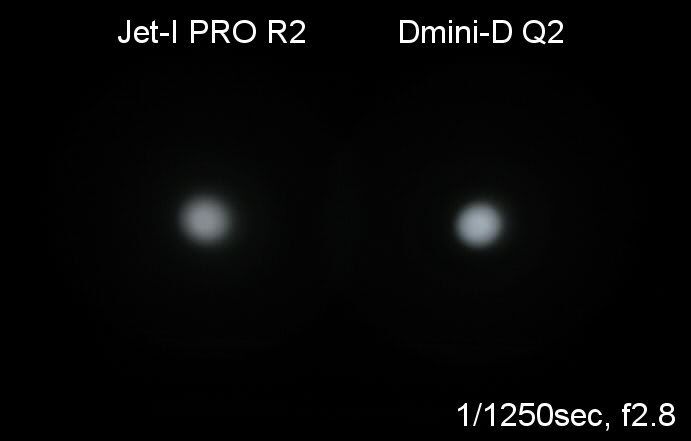 As you can see, beam profile is remarkably similar to the Dmini.

How well does it really throw in comparison? I’ll give you some lux @1m numbers in a minute, but I don’t think they tell the whole story. A picture is worth a thousand words ... here are some multiple-exposure beamshots of a "gremlin" at 50 feet in my basement.

While not quite as bright as the Dmini-D Q2, you can see it does a much better job at 50 feet than the more general-purpose NiteCore DI does.

Although the beam is fairly white on Hi (only slightly warm), there is a noticeable beam tint shift on the Med and Lo modes into the “pinkish” tones. I would estimate tint as a good WG/WH on Hi, WJ or a good WQ on Med, and definitely WQ on Low.

Although I’ve seen such tint shifts before, it’s usually far more subtle on Crees. I’ve checked with JetBeam, and they suggest the “silver” versions of the Crees are more likely to show this tint shift. I think we need to wait until more samples are out into other people’s hands to draw a conclusion. The effect is not overly distracting, but it is noticeable when changing modes (especially from Med to Hi).

Again, I think the Dmini is really a better comparator for the Jet-I Pro than any of the other 1AA lights.

For an alternate way to compare output, here are the results of a "ceiling-bounce" test in a small windowless room, with my light meter on the floor near the base of the light (which is shining upward in candle-mode), all on 2650mAh NiMH:

So despite the fact that my milk carton lightbox shows initial overall output is the same between the Jet-I PRO and NiteCore DI, the ceiling bounce shows a slight advantage to the Jet-I PRO. Note, however, that there is no difference compared to my pre-production NiteCore DI.

A final comment: there’s been some backlash about the output levels on Med-Lo for this light, and their relatively poor efficiency. I agree efficiency definitely needs to be improved, and I personally like a lower low mode. But it’s important to note that the Jet-I Pro is designed to be a thrower, and its output levels are not that far off from the classic pocket thrower: the Dmini-D.

IMO, this light is a step in the right direction for a 1AA thrower. However, it could use a lowering of output levels in Med-Lo, and more importantly it needs an improvement in efficiency on lower modes. Oh, and a tailcap lock-out feature would be nice.
Last edited: Jan 7, 2009

Wow, thanks for a wonderful review. This light intriques me. I read in a post that 10 minutes on high is all that is recommended, can anyone confirm that? My only big holdup is JetBeam's problems in the past, and the lack of good communication in the threads from JetBeam.
R

Selfbuilt, as usual, that is a great review. Great overview, accompanying pics gives a good view of the light. I like the fact you give details of the actual light and its functions, the follow it up with your observations and comments. Very thorough. :goodjob:

I was initially skeptical about the initial specs of the Jet-I Pro using the Cree R2 but your lux readings really opens my eyes. I thought the NiteCore was impressive but the numbers seem to support the Jet-I Pro as the thrower for 1xAA / 1x14500 lights. Just wondering, did JetBean provide any insight on why the high had such great regulation but the medium setting is so poor? Very strange.

It's too bad that I jumped on the bandwagon a little early and picked up both the CLE-V2, MII-R and Jet II as this light appears to beat them all in terms of output / runtimes.

Thanks again for your great review.

It's supposed to be a R2 WC tint right? I'm curious to see how mine performs with the different Cree process (silver) compared with my other Crees.

From all the data you gathered it looks like the Nitecore is the better light over all, as far as a more useful beam for EDC, better run times on the lower modes, etc. Shame there is a problem with the Jet I Pro with medium, seems like a defect to me. I wonder if they will send out replacement light engines to fix the problem.
Last edited: Feb 1, 2008
M

So I suppose that confirms the findings regarding the medium mode?

:wow: Thank you for the very thorough review. Excellent! :bow:

Location
outside of Austin, TX

Thanks, selfbuilt, for your excellent review, charts, beamshots, etc. Your reviews are setting a new standard for CPF, and I very much appreciate all the professional quality work you put into them. :thumbsup:

Thanks for a great review!

Maybe its just me but, the way a company ships, packs, and makes a box for their product tells me on how much they care about their business and how much pride they have on their product. (just my opinion)
L

AFAustin said:
Thanks, selfbuilt, for your excellent review, charts, beamshots, etc. Your reviews are setting a new standard for CPF, and I very much appreciate all the professional quality work you put into them. :thumbsup:
Click to expand...

Yeah, what he said.


Thanks for the wonderful review.

i read this review over and over again. glad i caught this before sleep. what a good bedtime story :thumbsup:

anywho, any measurements of what it's pulling on each mode at the battery? there was some weird measurements on a chinese website pointed out from another thrread. like 2.4a on high..err

they should just dump the med mode. i do agree that the NI seems to be a better overall light. perhaps with a r2 in it, it can surpass the jb.

the saga continues.. so much drama in the flashlight world

:twothumbs WOW!! Great review! Mine is in the post. Looking forward to the post man knocking on my door!

Got in early for the cheap sale on ebay!

Dogshund said:
:twothumbs WOW!! Great review! Mine is in the post. Looking forward to the post man knocking on my door!
Got in early for the cheap sale on ebay!

Yes, a great review, thank you too. :twothumbs
The medium-mode must be a j(etbeam)oke. It seems, JETBeam does not beta-test their flashlights. How is this possible??? :naughty:
But I'm in for $62, too.

Thanks for the pics.

Ouch that runtime vs output on medium and low are just killing the light.

One question for Jetbeam: Where is the 240 lumens?

Thank you for the great review, guess I'll wait for the next version (if it ever comes) cause this one is just not making the cut...especially with the current price tag.
J

That is unbelievably bad performance at medium and low levels. Shows exactly why PWM dimming should not be used.

Jarzaa said:
Shows exactly why PWM dimming should not be used.
Click to expand...

What is the technical problem with PWM? :thinking:
J

CandleFranky said:
What is the technical problem with PWM? :thinking:
Click to expand...