Fenix L0D-CE on left (bought at the Fenix-store.com several months ago, and my main EDC ever since), Jetbeam Jet-µ on the right (just received by air mail directly from JetBeam) 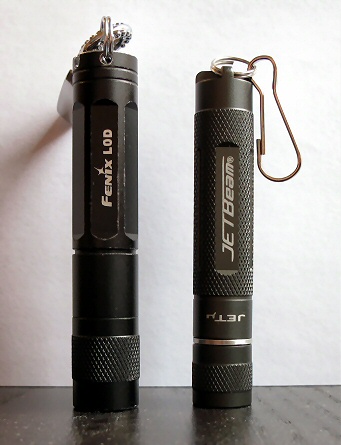 Home-made lightbox a la Quickbeam's FR.com method. My relative overall output numbers are typically similar to his, although generally a little lower. You can directly compare the runtime graphs - i.e. an output value of "10" in one graph is the same as "10" in another.

The relative output can be a bit misleading, given how the Jet-µ is almost all flood and the L0D-CE is a traditional spot beam with spill. Believe it or not, my lightbox reports the Jet-µ is brighter in most modes (see runtimes below). Relative output differences were confirmed by the “ceiling bounce” test in a small window-less room.

All beamshots below done on L92 Energizer e2 lithium batteries, at same exposure settings: 1/10sec exposure, F-stop 2.8, daylight white balance. Lights are about ~0.5M from the wall, to better show the spillbeams. 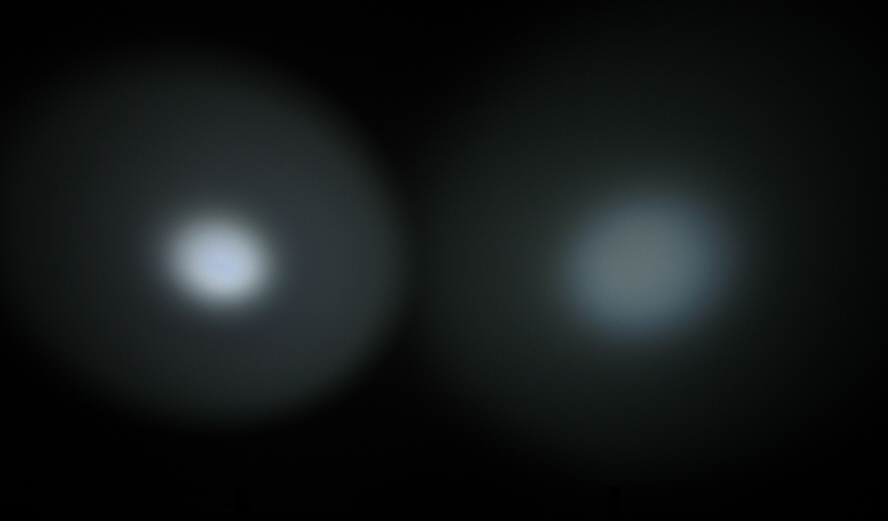 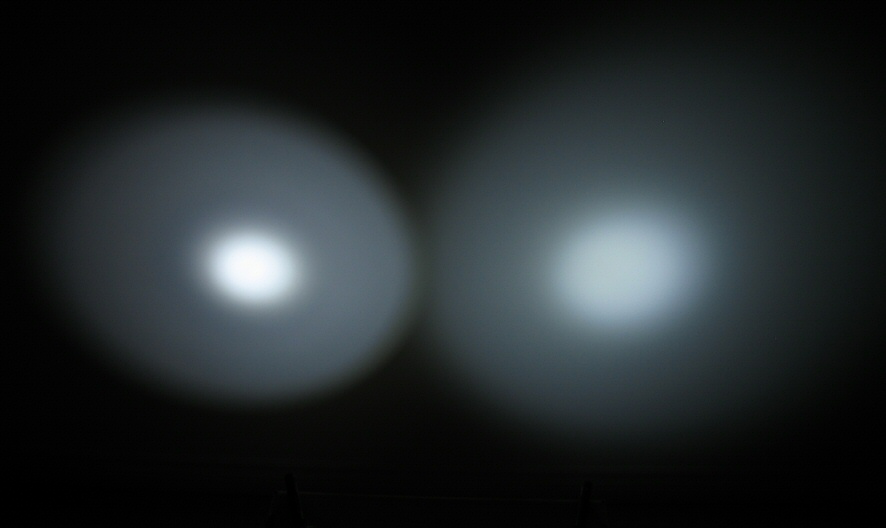 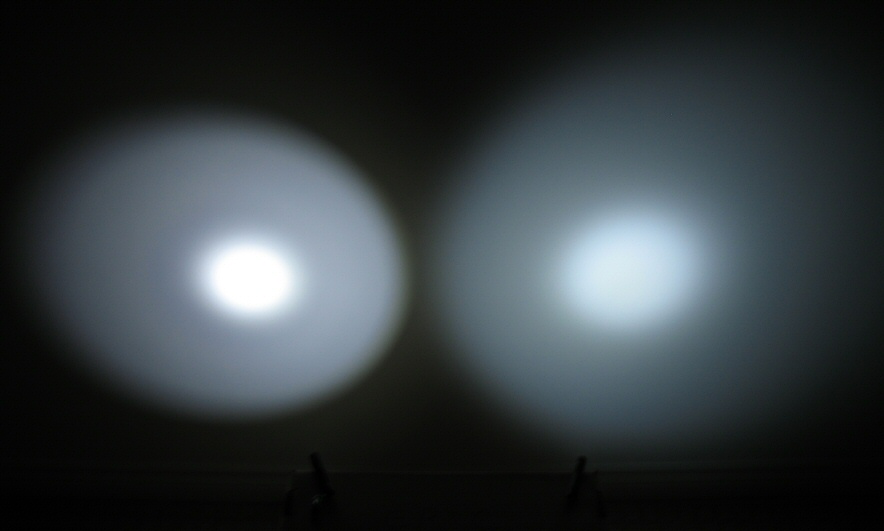 All runtimes done in my lightbox under a cooling fan, with the identified batteries listed below.

For the 10440 Lo mode run, I very briefly stopped the run at 1 hour intervals to verify the voltage on the 10440s (both 4.17V to start), and then continued the runtimes. Note that it's dangerous to run these down as far as I did (i.e. 75% initial output). In practice, I'd never let a light go below ~3.65V, because it's a rapid voltage "ski-slope" down from there.

Notes:
PWM: The L0D-CE uses 100 Hz in primary and low, the Jet-µ uses 314 Hz in primary and low. The L0D-CE strobes at 8.3 Hz, the Jet-µ at 7.6 Hz.
Mode Sequence: L0D-CE sequence is primary-low-hi-strobe-sos. The Jet-µ is primary-low-hi-strobe-standby. The Jet-µ also has a memory feature that memorizes the last mode used if you leave it in that mode for more than 1-2secs (a quick flash shows you memory is activated). When you turn the light back on, it will return to this last mode use (when the feature is working properly – see below for a discussion).
Li-ion 10440 compatibility: Although both lights can take 10440, running in Hi mode is not recommend for prolonged periods on either. In fact, the Jet-µ’s SSC emitter can’t last more than a few secs without turning bright blue (a sign of over-heating).

Here’s a few beamshots showing the Jet-µ on Hi on 10440 on the right, against my Surefire L2 on Hi on the left (all beamshots at 1/100sec exposure, F2.8, daylight white balance): 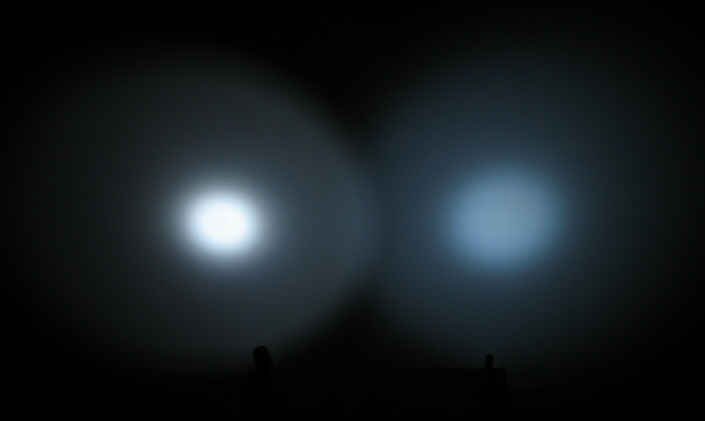 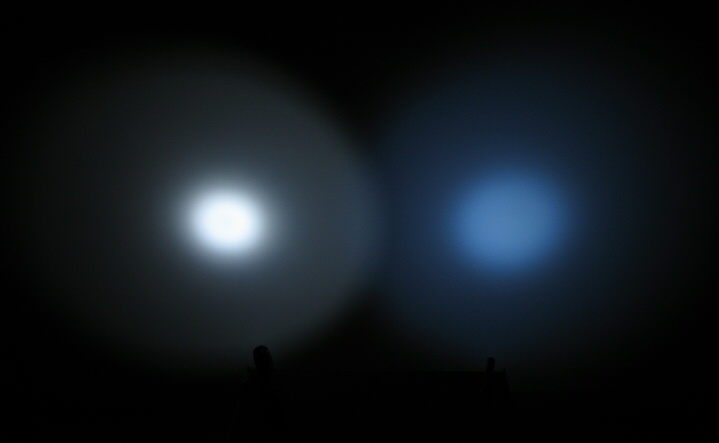 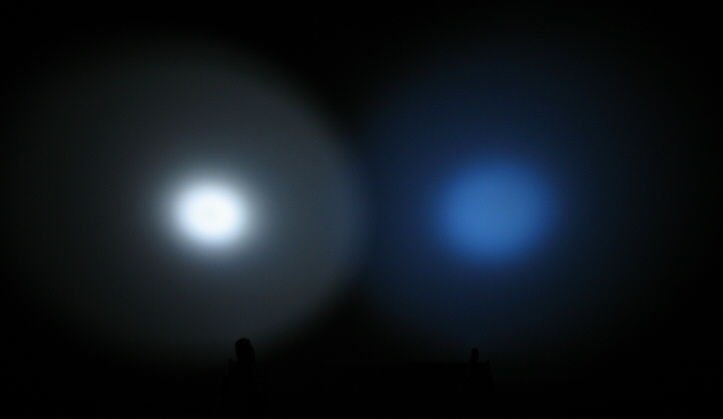 In real life, it doesn’t seem quite as blue as the images suggest, but you can tell it’s pretty bad!

I’ve done some temperature readings of the exterior surface of the head of the L0D-CE and Jet-u, both near the lens using a flexible temp probe taped down. No external cooling is applied for this test. Readings taken at 5sec intervals:

Frankly, I really risked destroying my Jet-µ emitter in the test above – WAY too blue after 45secs! And too hot to hold - very unpleasant unscrewing the head by hand above >50 C, let me tell you.

As always, your call what suits you best. Cheers!
:twothumbs
Last edited: Oct 1, 2007

I've been very interested in this comparison, since I was between these two lights.

I went with a JetBeam, which I should be getting any day now, and might be sorry. :sigh:

I really like the style of the JetBeam, but the Fenix seems to out-perform it in every respect (though the Jet puts out more actual light, the Fenix will still "feel" brighter).
T

Thanks for this great comparison! :twothumbs
A

Thanks for the detailed review.

I wish the runtimes were much better, especially for low.
Last edited: Jul 9, 2007
N

Another excellent review, selfbuilt. You are making yourself the new biblical reference standard for flashlight reviews....

BTW, you have once again confirmed my opinion that Fenix remains the current champion for battery efficiency in flashlight design.
J

Wowzers that's an amazing review. Has so much great detailed info and objective test results. The only thing that would make it better is more pics...sorry, flashlight p*rn.

I almost pulled the trigger on a Jet-u...it looks soooo nice, but held off due to the previous MKII and MKIIx Jetbeam releases reporting so many issues. Glad I did. I do like the increased output, but the contact issues make it a no go for me. I like to use my lights and not have to worry how clean the threads are. All my lights work even with dirty threads...sure, they might not be optimally bright, but if I need light, or need to switch modes, I know it will work.
T

:thumbsup:just the reveiw i and many others were looking for!

Thanks for all the positive comments everyone.

I too am a little disappointed with the Jet-u runtime on low. Just double-checked Chevrofreak's excellent curves for the L0D-CE, and it seems mine is star performer - my L0D-CE lasted almost an hour and half longer than his did on alkaline.

I'm going to try the Duracell 1000mAh NiMH on low on both lights, and will update the graphs above when it's done (likely sometime tomorrow).

As for flashlight p*rn, x2x3x2 has always has great detailed disassembly pics on his review site, and ernsanada always does excellent outdoor shots. I figure I can't compete there, so I thought I'd save my bandwidth for beamshots and graph.

What distance did you shoot your beam shots?

ernsanada said:
What distance did you shoot your beam shots?
Click to expand...

I didn't measure exactly, but it was about half a meter (~0.5M). Roughly the same as the beamshots in my multi-level 1AA review.

Nice review and great info Selfbuilt. Do you think you could do a runtime plot running low mode with a lithium ion cell. It is supposed to provide more light than medium mode using a NiMh but substantially longer runtime - 3.5 hours.

Excellent comparisons selfbuilt. Thanks for the time and effort. :twothumbs

I've been on the fence regarding these 2 lights - it seems the Fenix Lod Ce is the one for me.

regulator said:
Nice review and great info Selfbuilt. Do you think you could do a runtime plot running low mode with a lithium ion cell. It is supposed to provide more light than medium mode using a NiMh but substantially longer runtime - 3.5 hours.
Click to expand...

I'm currently doing NiMH run tests, but may try it tomorrow. I'm wary of low mode 10440 runs, because you have to watch it like a hawk to make sure you don't run down your batts. I may stop the runs at intervals to test voltage, to be on safe side. I'll keep you posted ...

It makes my option clear on which light to choose.

Hope you would do more great reviews
G

My two Jet-u lights do not remember the last setting unless I leave them turned off for 15 seconds before turning back on. Anyone else have this same issue?

As I understand it if I leave the light on more than one second and it blinks I should be able to turn it off and it should come back on at the previous level.

It does not unless I leave it off for several seconds before turning it back on.

I think that this is a defect. Anyone else have this same problem?

Just updated the low graph to include NiMH runtimes. The Jet-u clearly does better on NiMH than it did on alkaline. Interesting that my L0D-CE has exactly the same runtime to 50% on alkaline with NiMH, with only a slight bump in output (usually see more of a difference between battery types on most lights). The Fenix clearly seems to have a very well optimized circuit for running on low mode. 10440 low mode runs are currently underway.

FYI, I'm also working on a review of some of the popular single-stage 1AA cree/SSC lights from DX/Kai, as compared to earlier models I've moded to cree/SSC (e.g. Elly, Vippa, etc.). Should have at least the preliminary review up by the weekend, assuming the last of the lights arrive as expected.

That review will continue to be updated as new lights come in (especially the LM-301 which has just shipped ).

anybody know the runtime of the l0d on strobe?

You rock selfbuilt! THese reviews are so helpful!

No more of this CONUS stuff...

Thanks for all kudos - it's nice to know the results are appreciated!

Just added the Lo mode runtime on 10440, and the Jet-u finally pulled ahead of the L0D-CE. Nearly 2.5 hours to drop-off on the Jet-u vs 2 hours on the LOD-CE, for exactly the same output.

Too bad about the Jet-u Hi mode results on 10440, but honestly I'm rethinking the whole idea of these batteries in these lights. Doesn't seem like a safe idea to run on Hi in the L0D-CE either, since we seem to talking about ~3C discharge rate here.


f22shift said:
anybody know the runtime of the l0d on strobe?
Click to expand...

No one has done this to my knowledge, but I remember Chevrofreak had looked at it on the P1D-CE when it came out. As you'll see here, strobe runtime wasn't even as good as Medium (Primary) mode:
https://www.candlepowerforums.com/threads/144407

My Jetbeam MKIIX beamshots and runtimes