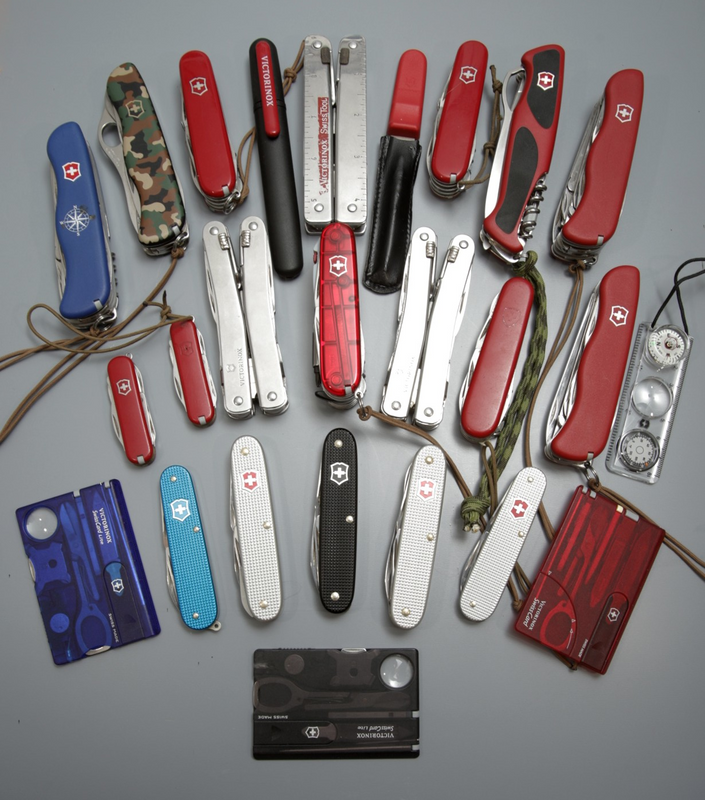 Using the right gem cutting abrasives is critical for gem cutters. Our grit, mesh, and micron conversion chart will help you choose the correct material. 
The last knife here with a serrated Kershaw Random Task 1510ST, steel 440V (now called S60V), I didn't know with using what to sharpen it for a long time, but the edge of the ezelap stone is slightly rounded and has enough diamonds to use it. Result looks scary, but it works and it cuts beautifully. 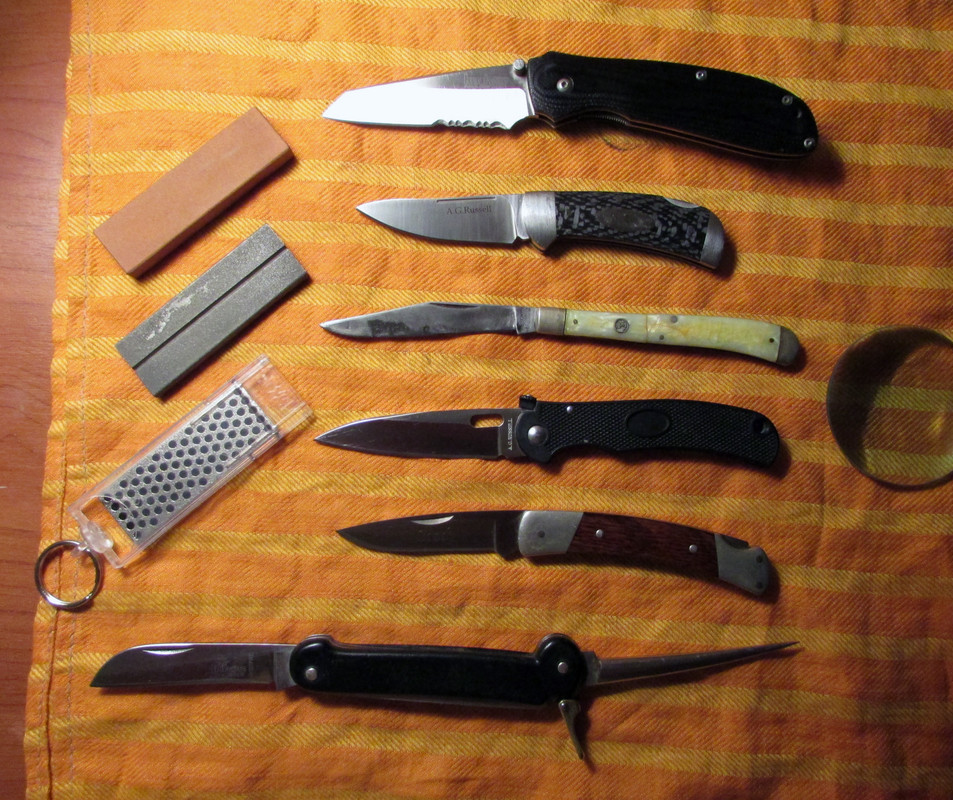 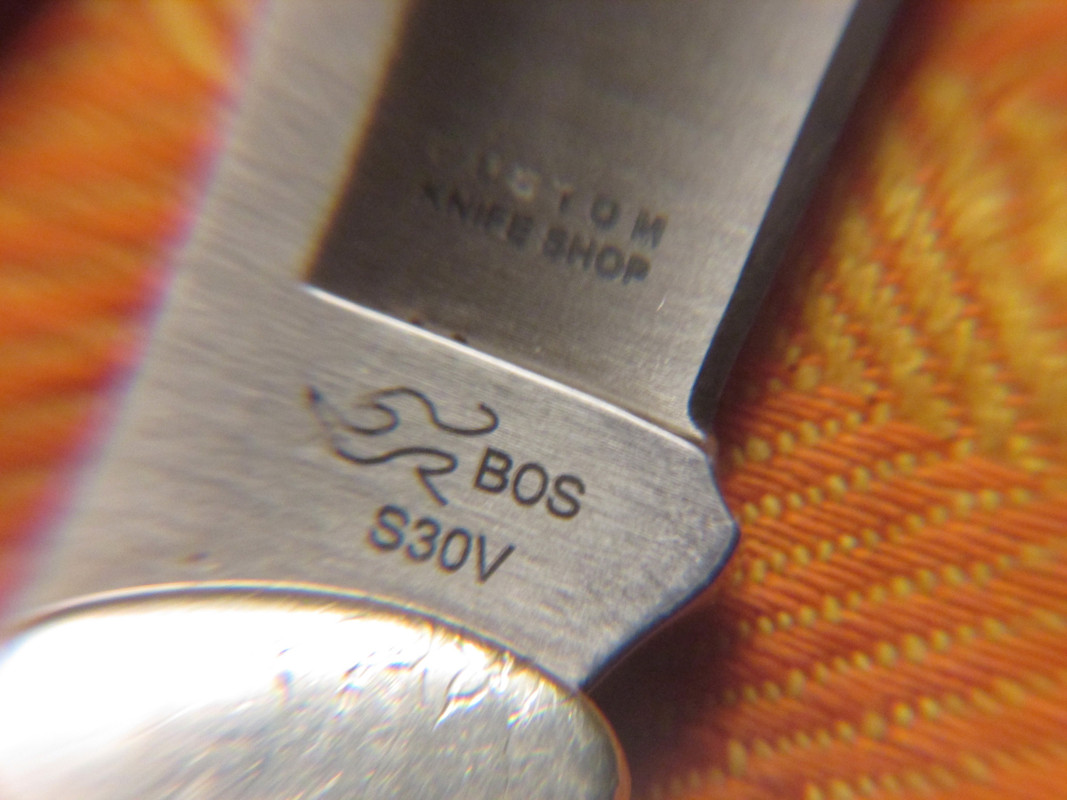 Sold a PM2 and bought a Victorinox Traveller and an Alox Classic. 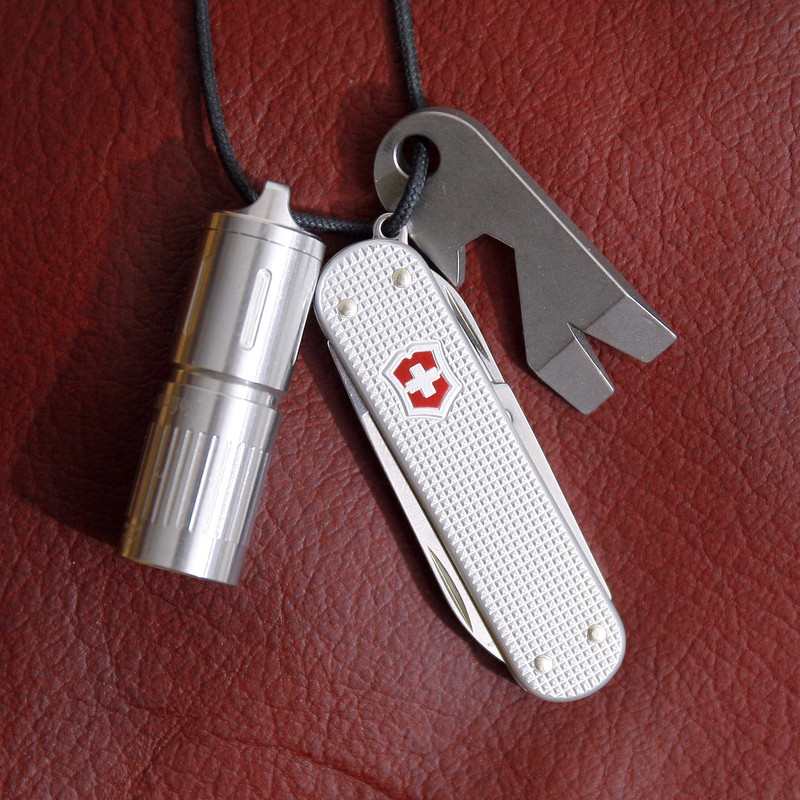 Ive stated before that I am a recovering gear addict. I have a problem with lights, knives, bags and to a lessor degree guns. I was pretty sure it was under control so felt like I could check in here and poke around…
7 Mailoffs later I just got a shipping notice for an Umnumzaan!
I swear flashlights are a gateway drug leading to complete and utter devastation to one’s disposable income!
Last edited: Nov 8, 2021

CHNeal said:
7 Mailoffs later I just got a shipping notice for an Umnumzaan!
I swear flashlights are a gateway drug leading to complete and utter devastation to one’s disposable income!
Click to expand...

Agreed! My freshly-acquired Sebenzas and en-route Inkosi put me in a similar space

Two-tone PM2. Flytanium scale on the backside and blurple G10 on the presentation side. Slides into the pocket easily on the smooth Ti, but has some grip. A fun combo to bump this thread up. Garden knife with one-sided bevel, like Emerson tactical knives. I read that one-sided sharpening helps gardeners make smoother cuts, but I have a suspicion that it is much cheaper and faster to make a bevel in one side than with both, that is, the reason is only to save time and money. Now it's a mushroom knife 💫

Here’s my latest bargain find; Tangram brand but made by Kizer

Seeing so many people posting about their knife acquisitions on various EDC/flashlight forums, it can be so tempting to keep growing the collection. There are a lot of great deals out there to be had for reasonable money these days. And then of course, the allure of going all in on a $400+ knife that should last you a lifetime. My "semi-grail" was a Spyderco Spydiechef, in place of the Slysz Bowie that's discontinued... but I kept missing out on nice used examples at the price I wanted. Then a major sales deal over on Chicago Knife Works, and I ended up with a new Kizer Wanderer well below the used Spydie prices. And frankly, it's so damn close I'm happy with it. Hunt is over.

But I hadn't yet found the right mini EDC knife. My smallest comes in at just under 2" and has a titanium frame, too small for a clip (just a hole for a split ring). So easy to toss in a coin pocket and it's superb with D2 steel--holds a nice edge and cuts practically everything I need to cut. Still, I wanted something a little larger, something I could clip inside my pocket. And finally, I stumbled upon it. The CRKT Squid. This is a very popular knife. CRKT has been making them for a few years and with a nice range of variations. I'd been growing hungry for micarta and then saw the Squid came with a micarta option. In fact, a few of them. At first I got the "copper" finished version. It's a beauty. But alas, after wearing it a bit, I noticed scratches becoming revealed on the clip. So I expect in time the coating would come off. I wanted a version that would be a little more robust. Enter the stone finished version. BINGO. 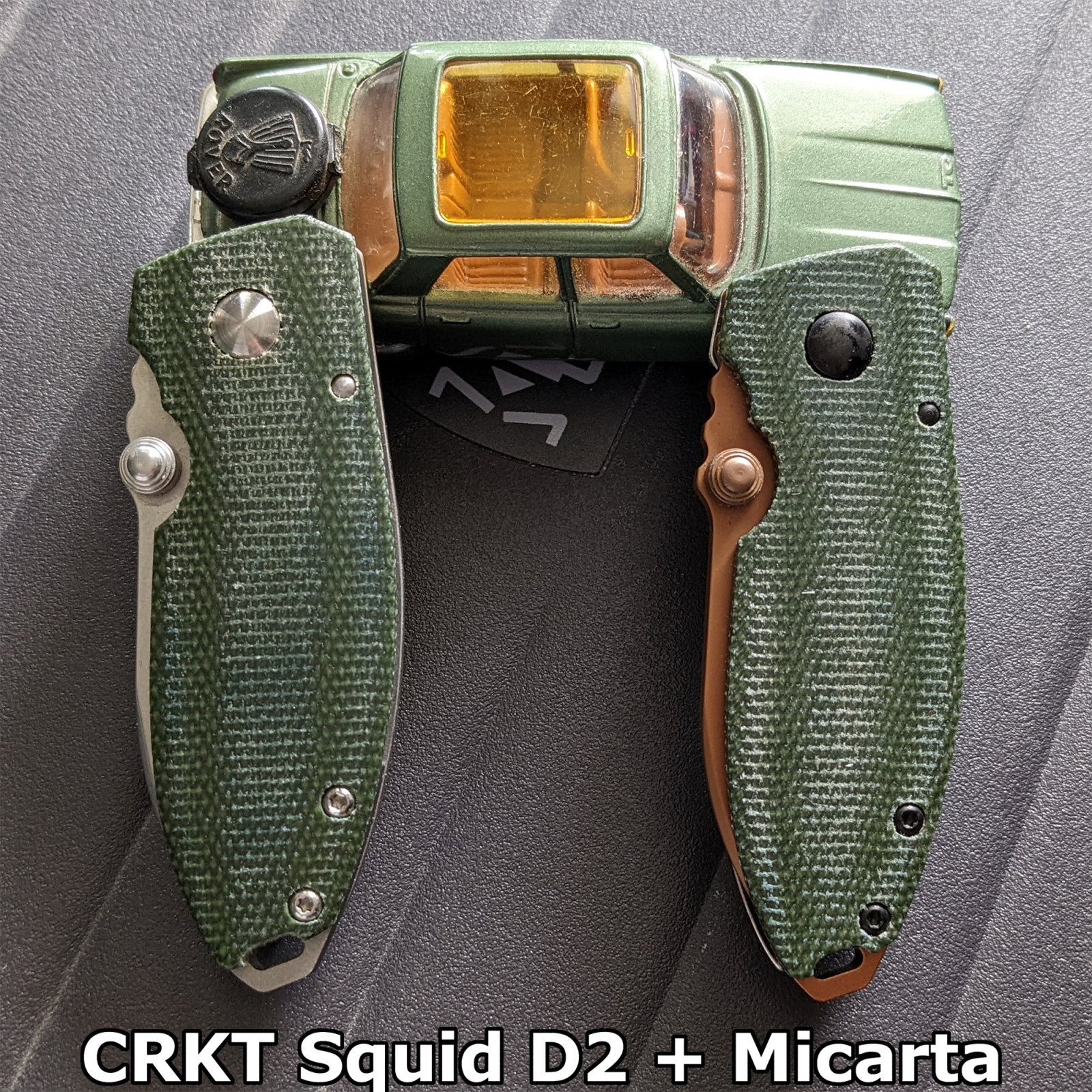 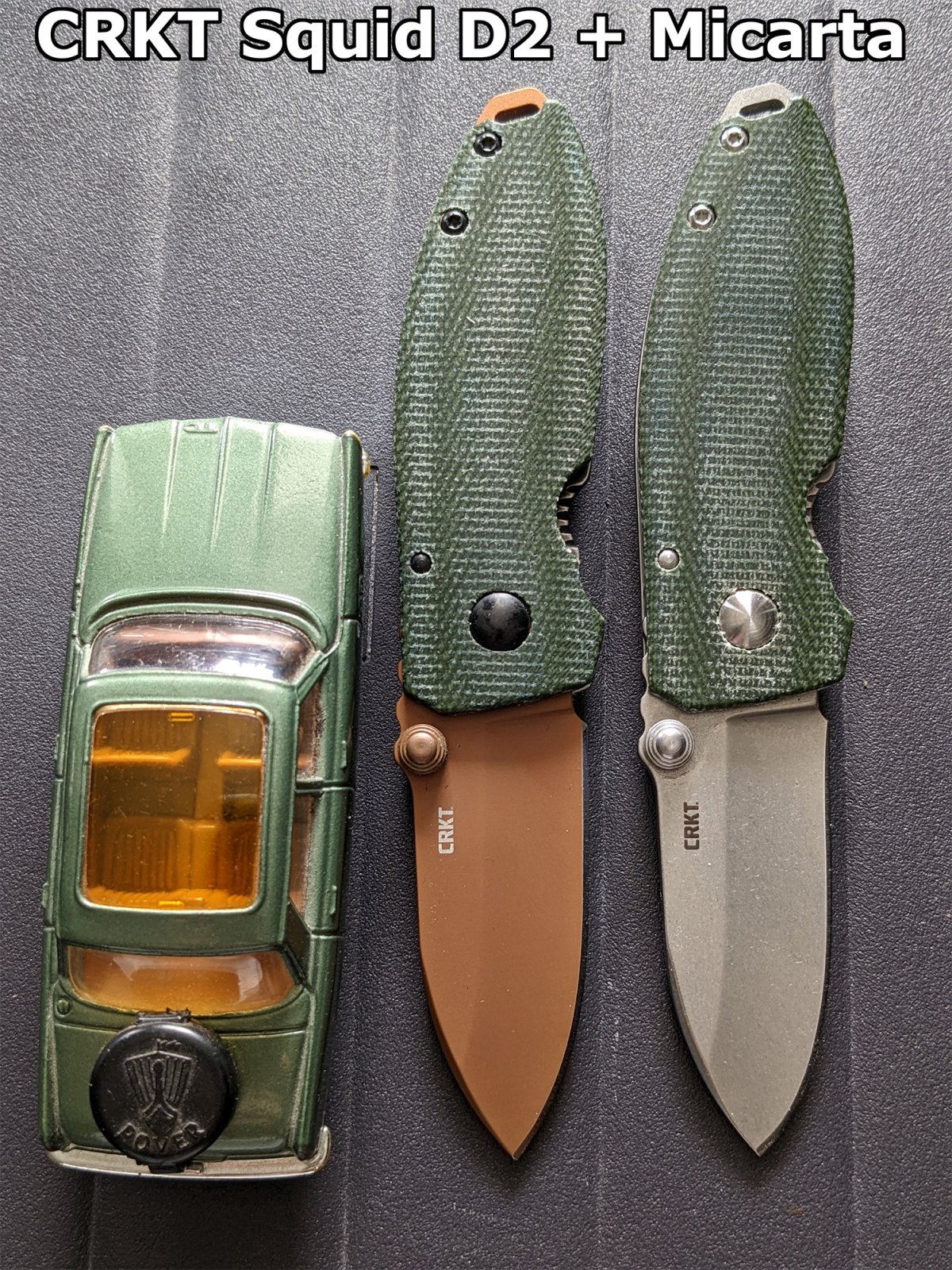 This knife is absolutely perfect for me. The blade length is terrific and its nice wide stance gives excellent strength. Plus, being so stout, the body is easy to grip. Very comfortable and ergonomic for a knife this size. Yeah, it's a little weird having micarta on one side and stainless steel on the opposite... but frankly, after a while I've come to appreciate the "Janus" factor. The action was a little stiff at first, but with a little lube and a few weeks of flipping open/closed, it's now quite smooth. So easy to snap open. And the diminutive size is so convenient. I've also come to find that when I take it out, No one nearby is startled. It looks harmless. No bulging 3~4" gleaming steel blade. It does not flash, so no eye snagging offered. Just what I wanted. No muss, no fuss. Unlike the Rover 2000TC which was a maintenance nightmare. 😄

Here's my latest - Boker Atlas Multi. Pretty handy little knife, even though I'm not a big fan of slip joints.

Bonus flashlight content. Guess where else I posted this picture? Or, don't. It's the internet, I ain't gonna give out orders.
S

Out of the box, into the pocket. No safe queens. nbp said:
Two-tone PM2. Flytanium scale on the backside and blurple G10 on the presentation side. Slides into the pocket easily on the smooth Ti, but has some grip. A fun combo to bump this thread up.


My CRKT clip is kinda wobly right now but it's been a few years at this point(picked it up back in 2020 while stocking up on 223 ammo at the local store)
Click to expand...

How's the clip on PM2? I've read somewhere it becomes wobbly after few months, but that doesn't sound like spyderco at all
Last edited: Jan 11, 2023

This is my latest knife purchase. Cold Steel Warcraft Tanto. I bought it for myself for Christmas a couple years ago. It is more knife that I need, but it sure makes me happy.

How do you keep your kitchen knife sharp?
2 3 4