Krypton vs. Halogen vs. Xenon?

I am considering reving up my 6V handheld spotlights (Alkaline lantern batt or 4D).

The lights currently have krpton bulbs and I am curious if halogen or xenon have anything to offer for this use? (Brighter, better color, increased bulb life, etc)

Are there any negatives with a bulb upgrade? (reduced bulb life, heat, fragile, etc)

Are there any replacement bulb brands or models you favor?

Thanks for pointing me to the link. Great info.

Now from the theoretical to the practical...

Does anyone have a favorite PR bulb for a 6v lantern/spotlight?

Wow, I was about to ask ethe same question.

js and others have some excellent info.

FYI: The stock Tec-40 bulb (HMP-20, 4.8v, 0.5A) uses halogen. Edited to correct the bulb.
I always wondered why they were shaped differently than other bulbs (pointy), because the beam isn't as nice. Hey, isn't there a place online that sells nice PR halogen bulbs?

I'ver used the GH24 (6 volt) bulbs - both normal and frosted - they are great. AND you can even over drive them with 3 CR123s with no problems!

pizzaman said:
Are there any negatives with a bulb upgrade? (reduced bulb life, heat, fragile, etc)
Click to expand...

The short answer is that xenon will improve the light output (maybe by 10%), give slightly whiter colored light, and lasts longer. Xenon is also more expensive, so it might not be worth it. Halogen would be even better, but you would probably have to get a flashlight designed to use a halogen bulb, since a bare halogen capsule can get very hot.

Halogen capsules can also be inconvenient to install because they should not be touched with bare hands, since the traces of oil left on the extremely hot fused quartz capsule can become charred, leading to localized overheating and rupture of the capsule.


Here is the long answer:

The addition of krypton gas to a bulb increases filament life by reducing evaporation, and slightly increases efficiency because the higher molecular weight gas is less conductive of heat away from the filament. Xenon is even better than krypton.

A halogen capsule makes the filament last significantly longer, although the iodine vapor in the capsule absorbs around 4% of the lumens (the absorbance of iodine is a smooth curve, mostly in the central greenish portion of the spectrum, very slightly in the blue, this can give halogen light a very slight but noticeable pinkish tint in some cases). If the type of gas filling allows the filament to last longer, the filament is often designed to be shorter and thinner (maintaining the same resistance value) to allow a higher temperature. The filament glowing at a higher temperature leads to greater efficiency and whiter color of light. The halogen filling just allows the filament to be designed to run at a higher temperature without burning out too fast. So to directly answer your question, typically a halogen version of a bulb will have better performance than xenon.

In general, halogen puts out whiter light and is more efficient (because the filament is usually designed to run at a higher temperature). However, operating at a higher temperature can make the filament mechanically weaker and more vulnerable to vibration. Since we are discussing flashlights, another thing to mention here is that halogen bulbs designed to use lower voltages last longer than halogen lamps running on outlet voltages, since the filaments are thicker for any given wattage.

Krypton gas helps increase the efficiency more for smaller bulbs, where the losses to thermal conduction are greater. For a 100 watt bulb, using krypton would only increase the efficiency by 4%. It should also be mentioned that a regular 60 watt bulb is still going to give off whiter light than a standard 20 watt xenon bulb. When they say xenon gives off "whiter light", what they really mean is that the light is whiter than a bulb of the same wattage that is rated with the same lifespan. Higher wattage and shorter life still make more of a difference in color temperature.

Xenon and halogen bulb versions typically give off a little more light and last somewhat longer than regular bulbs, though how much more of each depends on the construction of the filament, since there is an inherent trade-off between efficiency and filament lifespan. Virtually all flashlight bulbs use krypton, though krypton is sometimes used in certain "higher performance" regular incandescent lamp bulbs. Regular light bulbs normally contain an argon gas filling (with a smaller amount of nitrogen). If you look on the periodic table, neon, argon, krypton, and xenon are all noble gases which have progressively higher atomic weights as you go down the column.
Last edited: Sep 5, 2013

the best 4 cell* pr bulb i used was hp50 halogen from radio shack, 5,2v 800ma. however on RS site the pic of it is wrong, it really has cylidrical envelope not globe shaped as all other pr bulbs do, and it gives thightest focus. cuz its filament is straight unlike somewhat v shaped in the rest of the bulbs
Last edited: Sep 14, 2013

Now we just need to hope the OP hasn't bought a new light in eight years..

lol, i didn't even look at the date. necro ftl

+2 lol. I just looked at the date too. But, I learned something and that is good.

Thanks for the info.
X

But, as the years roll by, krypton still rules the day with its heat of fusion of 1.63 kilojoules per mole
.​
X

I used to use Mag's xenon PR based bulbs in my 4D Mag back in the day. After having an LED in this light for some time I put in a old krypton bulb and man, I had forgotten how bad the krypton bulbs sucked! The xenon bulbs are far better, brighter, whiter and give a much, much better looking focused beam. I have also used radio shack halogens, which, if I remember right worked about as well as Mag's xenons. In general you need to be careful not to touch halogen bulbs or the oil from your fingers can cause them to burst when they heat up (the gas inside is under a lot of pressure).


I'm not a huge fan of Mag's new bi-pin xenons - the pins bend when you put them in and you have to fiddle to get them straight and centered. Also I don't much care for the new bi pin bulb holder, I think mag should have just standardized on the PR xenons and been done with it.

I know that Xenon is used in some gas-discharge lamps (creating light by sending electric discharge through ionized gas plasma) , but I am not certain if there is some identical effect in an incandescent Xenon filiment lamp is the reason for the extra 10% of brightness and the shift in color temperature from yellow to blue.

Also, as usual on the Internet, both in this thread and the thread linked in first reply to this thread, the statements members are making must forfeit some accuracy in how they attempt to be overly-definitive, as in what I may be reading into them, "this is how it is, and only how it is."

I know wikipedia is riddled with error, but have a glance at the gas-fill section of the incandescent light bulb page.

If this section is accurate, then everyone has missed that most Xenon lamps are in fact Krypton lamps with Xenon gas added, and the suggestion that none of these lamps regardless of manufacturer designation ever cross this line of demarcation, which is the gospel of what they are advertised as. After all, advertised specifications never ever lie, not ever, never happened in the history of advertising, not once, you must be mistaken if you believe any advertising an exaggeration or flat-out intentional deception.

I would think by now there is so much cross-over that most lamps we get that are designated Xenon also have Krypton and some Halogen. But this is only a guess.

I just wish sometimes that some of the actually more knowledgeable members would have the humility to add "I think," or "I believe," or "I am pretty sure, nearly certain," rather than being overly proud and stating from omniscience "it is only this way, and I am always right." Luckily for these two threads no one has disagreed with any of the unequivocal descriptions of the options for apparently intrinsically different lamps. I believe the descriptions are probably outdated and no longer strictly accurate. But honestly, I don't have any idea, so I will stick to my skepticism, yet still defer to those statements by more experienced and knowledgeable members. And I thank them.
X

I don't know about other bulbs, but Mag's krypton bulbs are completely different from their PR base xenons - the xenons have a slimmer rounded cylindrical shape instead of the fat tear drop shape of the kryptons.....I'm guessing the xenons may have higher gas pressure inside, I think the radio shack halogens also had this bulb shape. 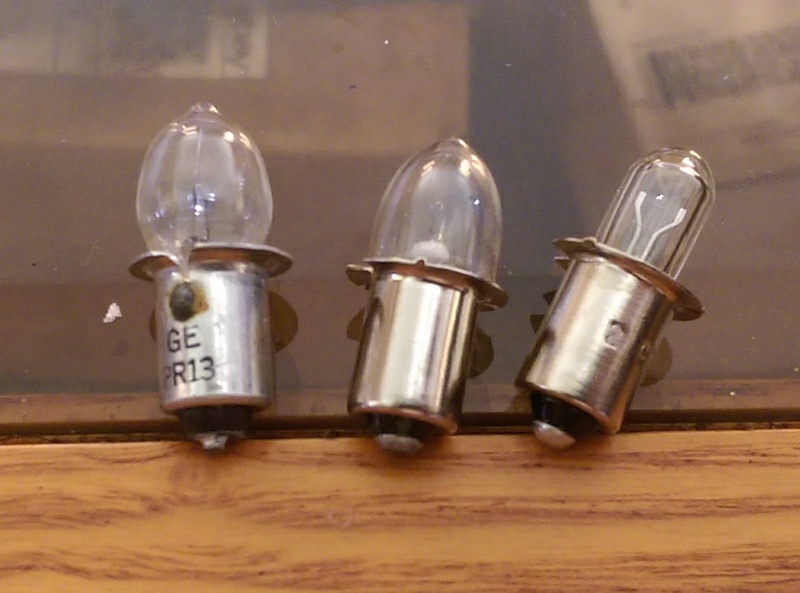 - Left is a typical argon by GE but that's what a Mag krypton resembles.
- Right is a PR base Mag xenon.
- Middle is a typical after market krypton bulb like a KPR112

Yes xxo the Radio Shack halogen resembles the Mag xenon, where other halogens had/have a sharp tip like an icecicle.
Now the Mag 7 cell Krypton I have were shaped like the Mag xenon in the photo. 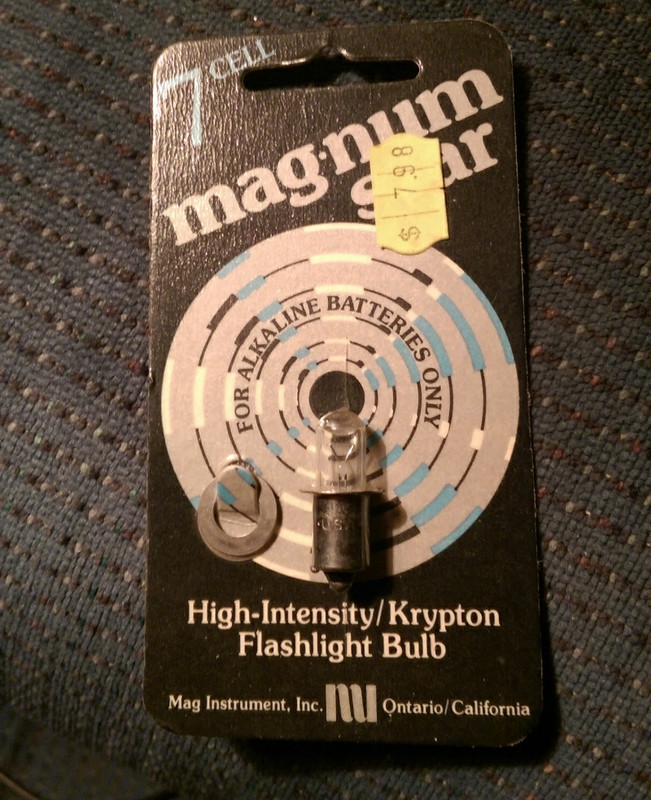 https://www.candlepowerforums.com/vb/showthread.php?220605-RARE-MAGLITES/page17
See post #826 for some info about why halogen were so sought after back when.
Last edited: Jul 11, 2018
A

bykfixer said:
https://www.candlepowerforums.com/vb/showthread.php?220605-RARE-MAGLITES/page17
See post #826 for some info about why halogen were so sought after back when.
Click to expand...

Thank you for the post. In my experience with Surefire lamp assemblies compared to all other brands leads me to conclude that the statement "The Halogen bulbs provided a marginally longer life" is the largest understatement I've read in a long time. Maybe ever.

When you're working security walking around buildings all night for many years using Surefire lamp assemblies for hours at a time, most often with lithium ions and they never darken over years, that says something about the xenon-halogen process.

Especially when every other bulb darkens after a couple or few hours use.
Last edited: Jul 14, 2018

ampdude said:
When you're working security walking around buildings all night for many years using Surefire lamp assemblies for hours at a time, most often with lithium ions and they never darken over years, that says something about the xenon-halogen process.
Click to expand...


ampdude said:
Especially when every other bulb darkens after a couple or few hours use.
Click to expand...

U
Halogen vs. Xenon