LED C9 christmas lights that compete with incandescents for brightness

I like LED christmas lights but the larger C9 styles have been... well, dim. They usually consist of a SMD LED in the base, aimed up at a plastic faceted lens. They're ok for chasing effects but there's something about that dimness that always left me wanting something better, something closer to old school incandescents.

Well I've just found a new style of C9 LED light that's at least as bright as it's incandescent counterpart, and it's called the flex filament LED. I don't want to post a commercial link here but search on Flex Filament C9 christmas lights and you'll find them all over the place. They're fixed colors, not RGB, but they are dimmable and each 120v bulb draws .8 to .9 watts. Direct screw-in replacements for C9 incandescent bulbs.

It appears they're using the same phosphor-while LED filaments in all of the colors.

I bought a 5 pack of multicolor to try them out before committing to a whole string, and I like them. I'm hoping they come up with a solid opaque version which I prefer over the transparent ones, but these are still pretty good. 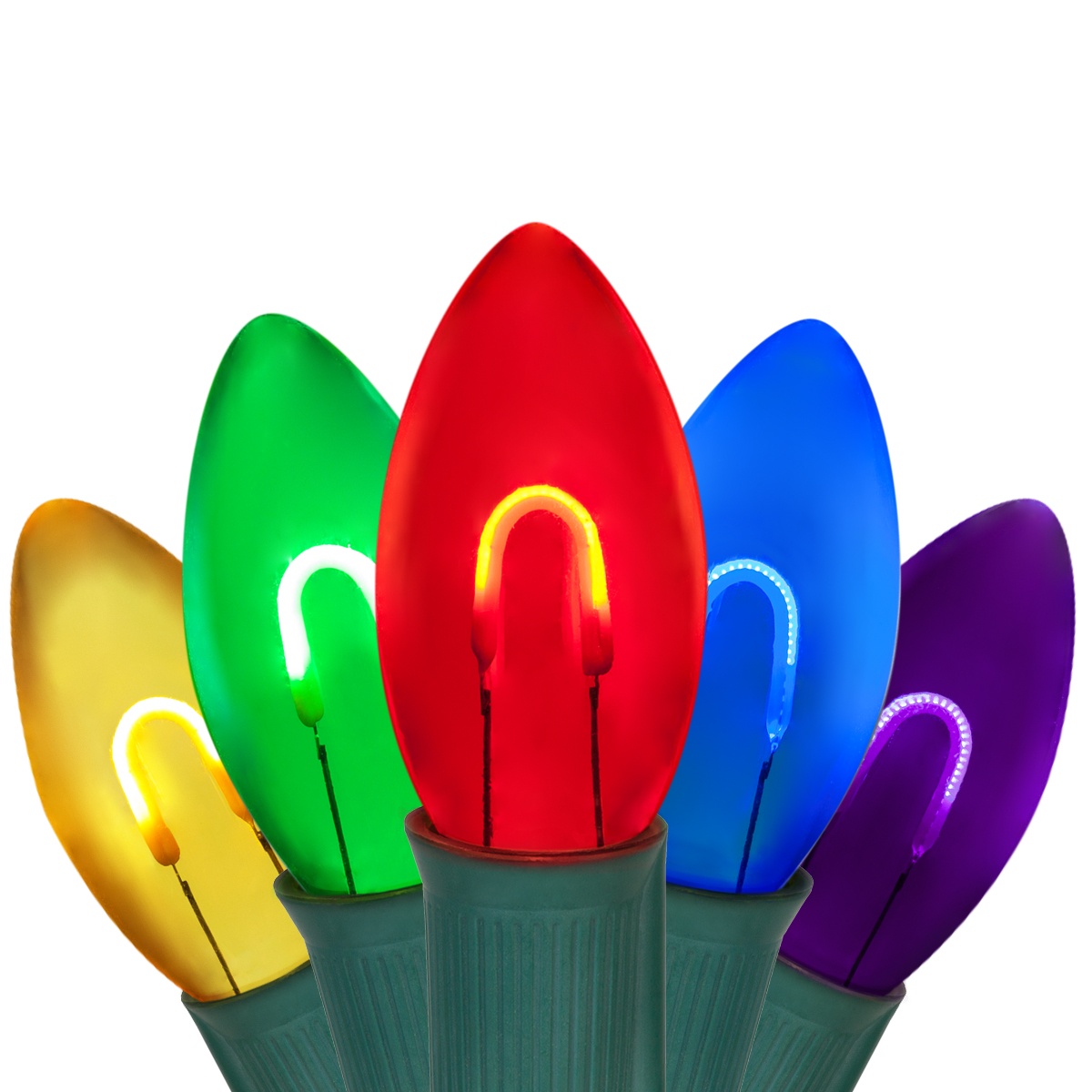 I will keep an eye out for these post-Xmas, though a bit leery of the trend to replace monochromatic
LEDs with white plus coloured bulb tint. These look not too bad in the image, but others I've seen are
passable/mediocre to horrible (especially reds). Low-end battery LED strings in dollar stores are doing this a
fair bit; glad I snapped up some of these in advance.

Dave_H said:
I will keep an eye out for these post-Xmas, though a bit leery of the trend to replace monochromatic
LEDs with white plus coloured bulb tint. These look not too bad in the image, but others I've seen are
passable/mediocre to horrible (especially reds). Low-end battery LED strings in dollar stores are doing this a
fair bit; glad I snapped up some of these in advance.

They are definitely better than the E12/E17 bulbs from years ago. They're still ind of pricey though. My pack of 5 was $15, so it would cost cost $75 to retrofit a 25-light string. Gah.

I really like the brightness though, and the phosphor-white filament probably adds a little bit of warmth to an otherwise highly monochromatic output. And I like the fact that the light source is in the middle of the bulb, not in the base.
J

Dave_H said:
I will keep an eye out for these post-Xmas, though a bit leery of the trend to replace monochromatic
LEDs with white plus coloured bulb tint. These look not too bad in the image, but others I've seen are
passable/mediocre to horrible (especially reds). Low-end battery LED strings in dollar stores are doing this a
fair bit; glad I snapped up some of these in advance.

They look much better. I have LED lights outside, but my tree is still incandescent mini lights. I have yet to find an LED that is acceptable.

Monochromatic makes for awful light as it does not adequately light what is around it. It is good in a fixture where it is premixed and your start with at least 4 colors.
D

Having grown up with incandescents, I would also enjoy the similarity if it's done right.

I like those saturated colors also, but when they're directly attached to a house, they don't project the same kind of visual warmth on the walls or soffits as incandescents (or phosphor-white with colored bulbs) LEDs. There's something special about that warm glow, beating back the cold, dark night with holiday cheer.

Update on this topic - 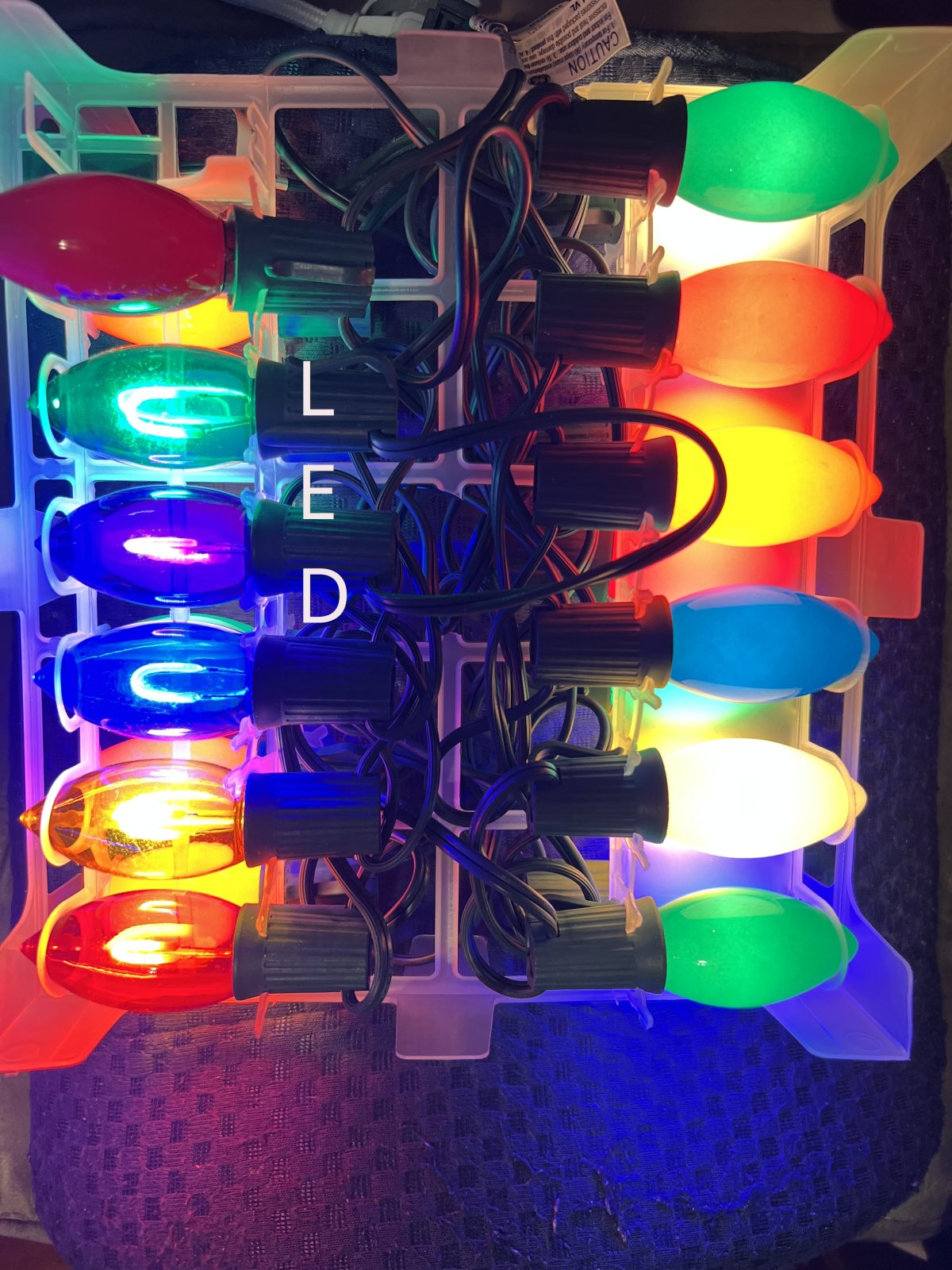 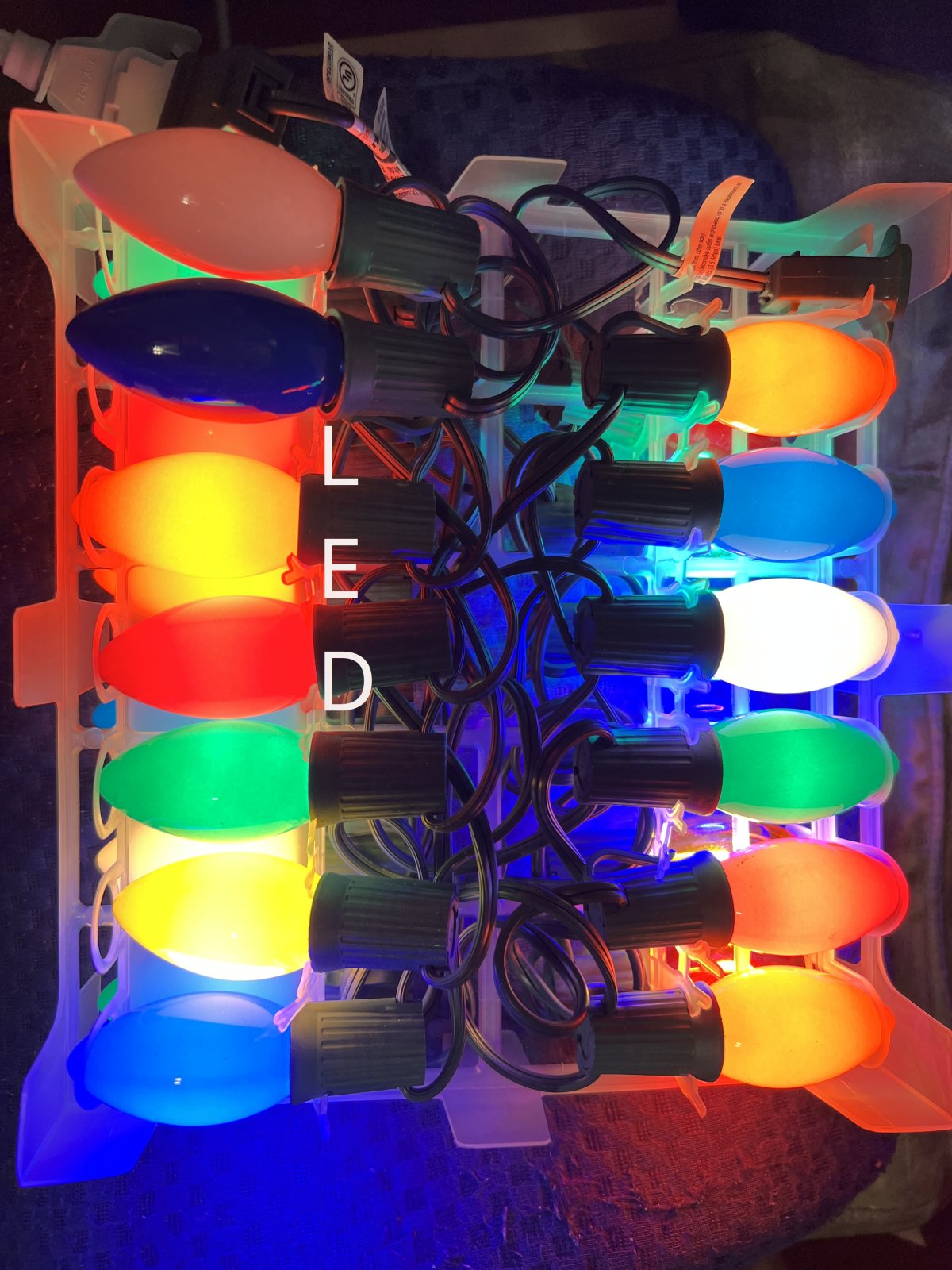 A19 filament LED bulbs in different colours (red, green, blue, yellow etc.) have been around a while, but are ordinarily white filaments with clear bulb with coloured lacquer. True monochromatic colour bulbs are not brand new but ones I have seen so far (Noma brand) have been overpriced ($10 or more for an otherwise ordinary bulb).

Home Depot had green ones for around $5 so got one. Emerald tint is very pleasing. Comparable filtered bulb is OK but more white-ish; some people may prefer this.

It's an ordinary bulb shape but as they have red also I guess this is somewhat a Christmas thing.

BTW I see some advantage with a translucent coating on some brighter filament bulbs as glare can an issue; and it evens out the light somewhat.

Nothing much new here with seasonal lighting, still trying to "use up" what I have, but will check out clearances later when they happen. I noticed a trend in super-large bulb-shaped ornaments with multiple LEDs inside, hanging or with stakes for outdoor ground positioning.

One of them shattered tonight. Here's what's inside. The filament phosphor looks like the cool white variety. It is rubbery to the touch. 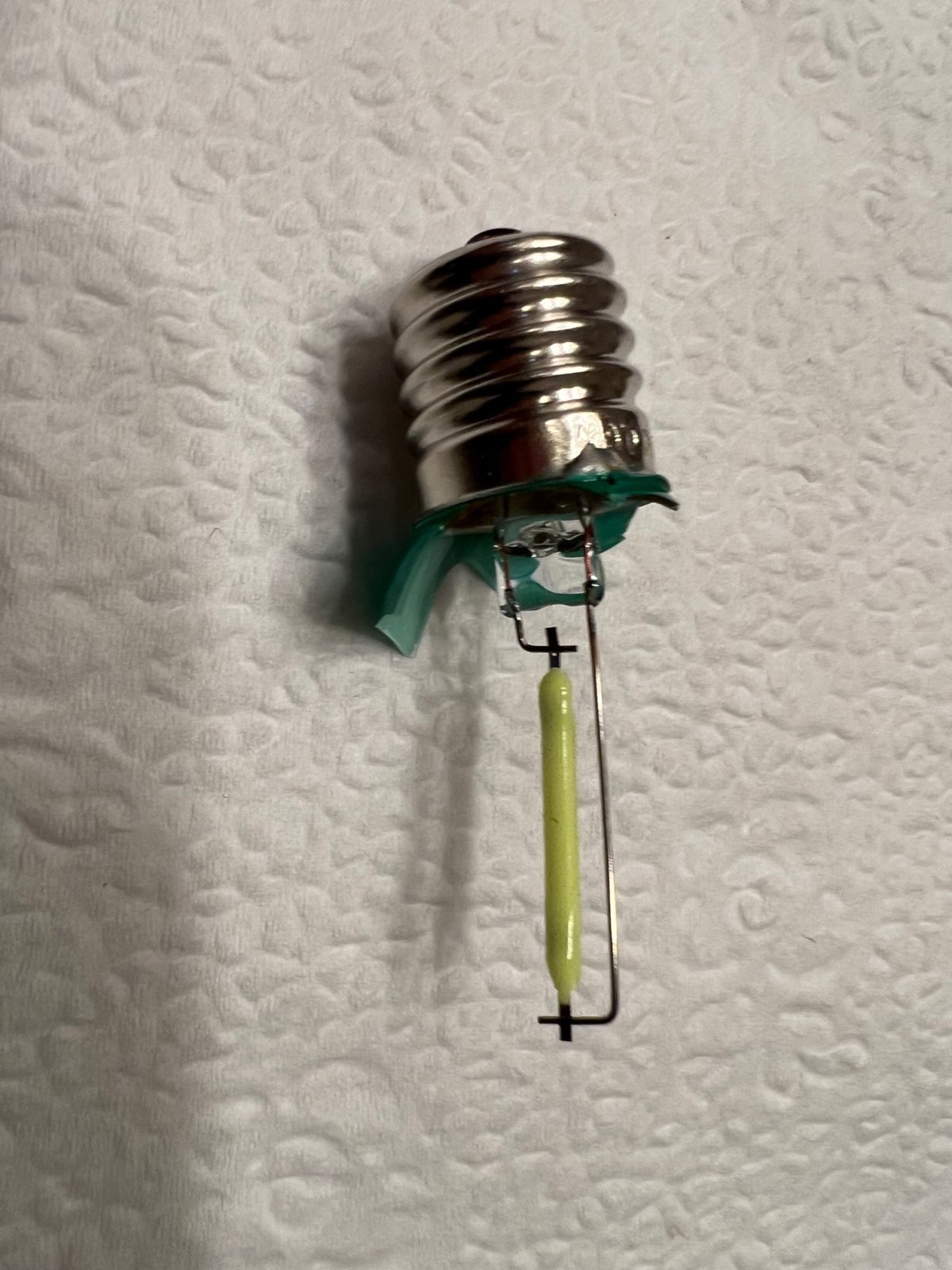 Thanks for the info. My wife has a strand of Christmas lights that use those and I was hoping to replace them with LEDs.

I'm very pleased with these. The filament shape gives them a nice even light distribution that looks virtually identical to incandescents.
D

I've been playing with small C7/E12 clear LED bulbs from Feit (2 SMT LEDs) and Globe (single filament). Both are improvements over earlier bulbs using three SMT LEDs in the base, pointed up; and early coloured LED Xmas bulbs from over a decade ago using 3mm/5mm LEDs.

Feit bulb uses a small PCB strip with SMT LED on each side facing out, giving good dispersion. Needless to say, filamant has even dispersion also.

They are still a bit pricey OTC here, filamants $5 for 2-pack (could do better), considering a much bigger generic brand 100W equiv. bulb at Dollar Tree costs CDN$1.50 .

I have not opened either of these (accidentally or otherwise), curious what they use for current regulation. I imagine it's linear, which can work OK at these low currents, and no space in such small base for a large non-polarized capacitor often seen in nightlight circuits.

I'm going to provide a link to this thread to our oldest son. He took the Christmas Illumination reigns from me a few years back. 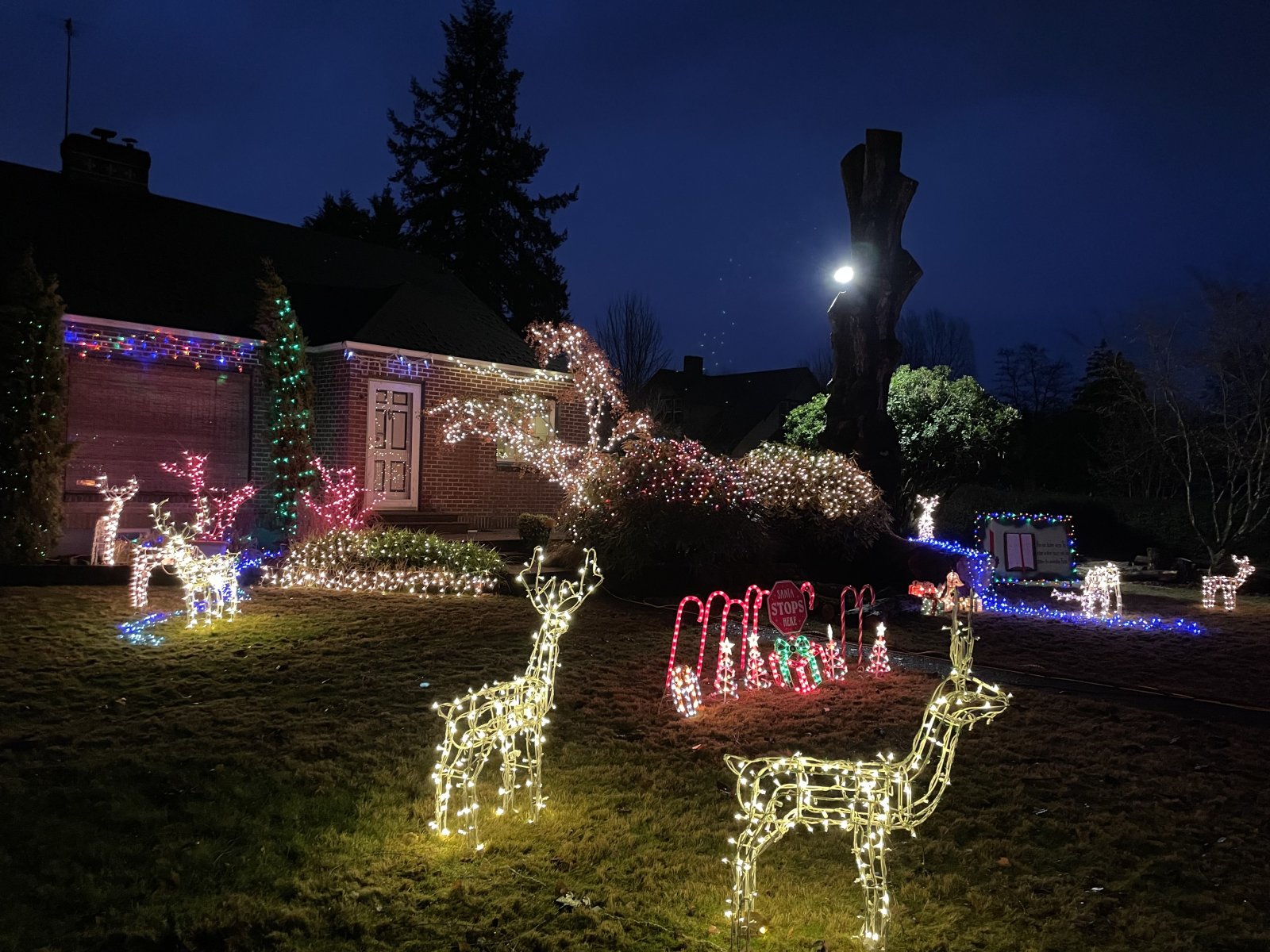 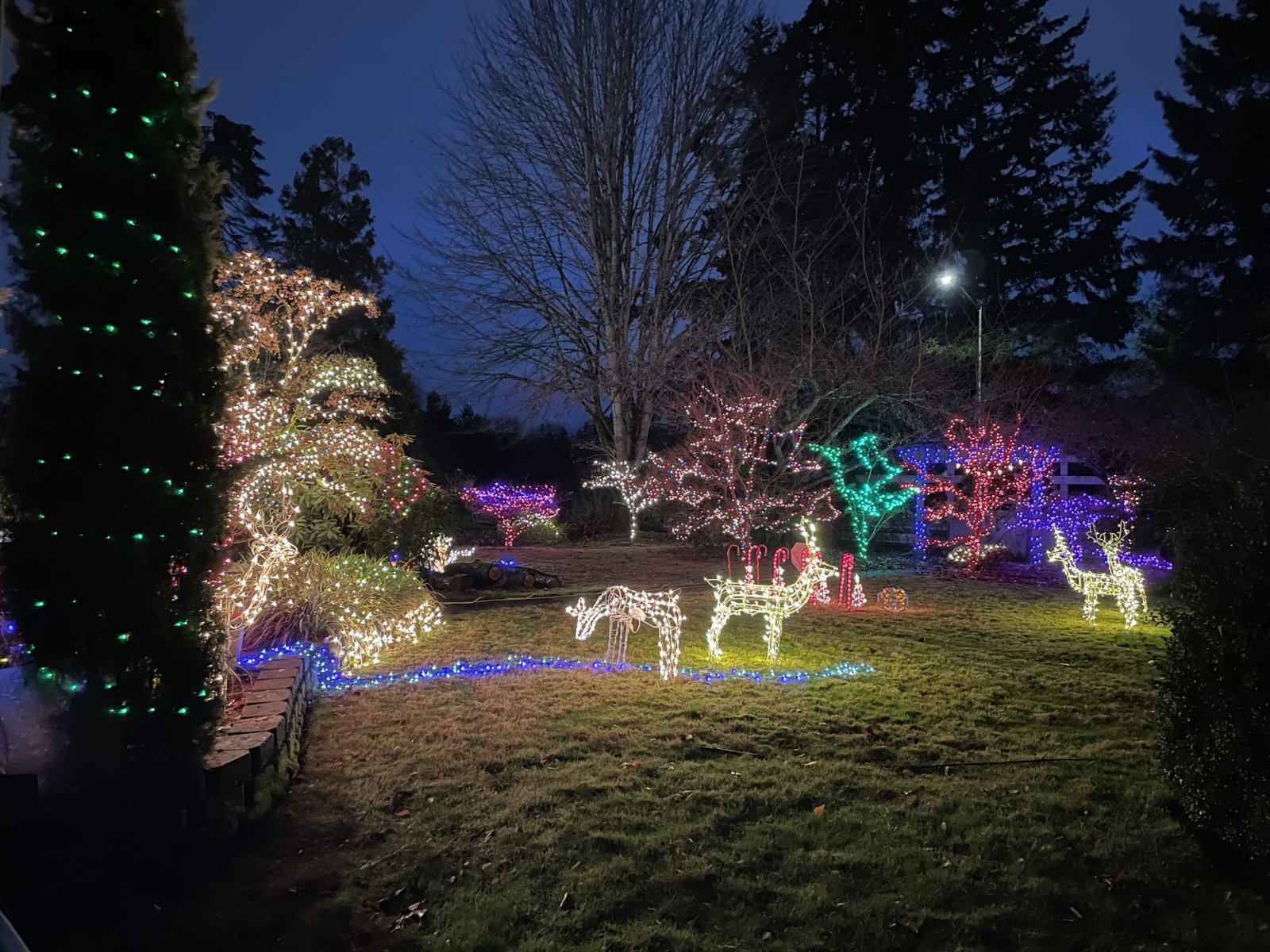 I expect some flicker given size/cost constraints of these small bulbs, but if they are full-wave rectified as with even $1.25 Dollar Tree nightlights, it would be 120Hz. Traditional LED Christmas light strings are only half-wave, being on less than 50% at 60Hz which is usually noticeable.

A quick test using POV to show the on-time is to grab a bulb firmly and wave it back and forth rapidly. The light bands show the relative on/off ratio. The C7 filament and another similar 0.7W single-filament round bulb (typically used in patio light strings) showed roughly 50%. The SMD LED bulb was somewhat longer, about 75%. An Ikea round 0.9W 100 lumen two-filament bulb showed no off-time.

Re: one more
That Aqua Marine color really sets it off.

I
Are LEDs cooler then Incandescents