Has anyone seen any LED pumped (instead of using a laser diode) phosphor target flashlights other than this one I just found on ebay today?

Find many great new & used options and get the best deals for LEP LASER FLASHLIGHT TORCH SPOTLIGHT WLL-TITAN-X75 2500MTR 0.25LUX AT 7500MTR AU at the best online prices at eBay! Free shipping for many products!
www.ebay.com 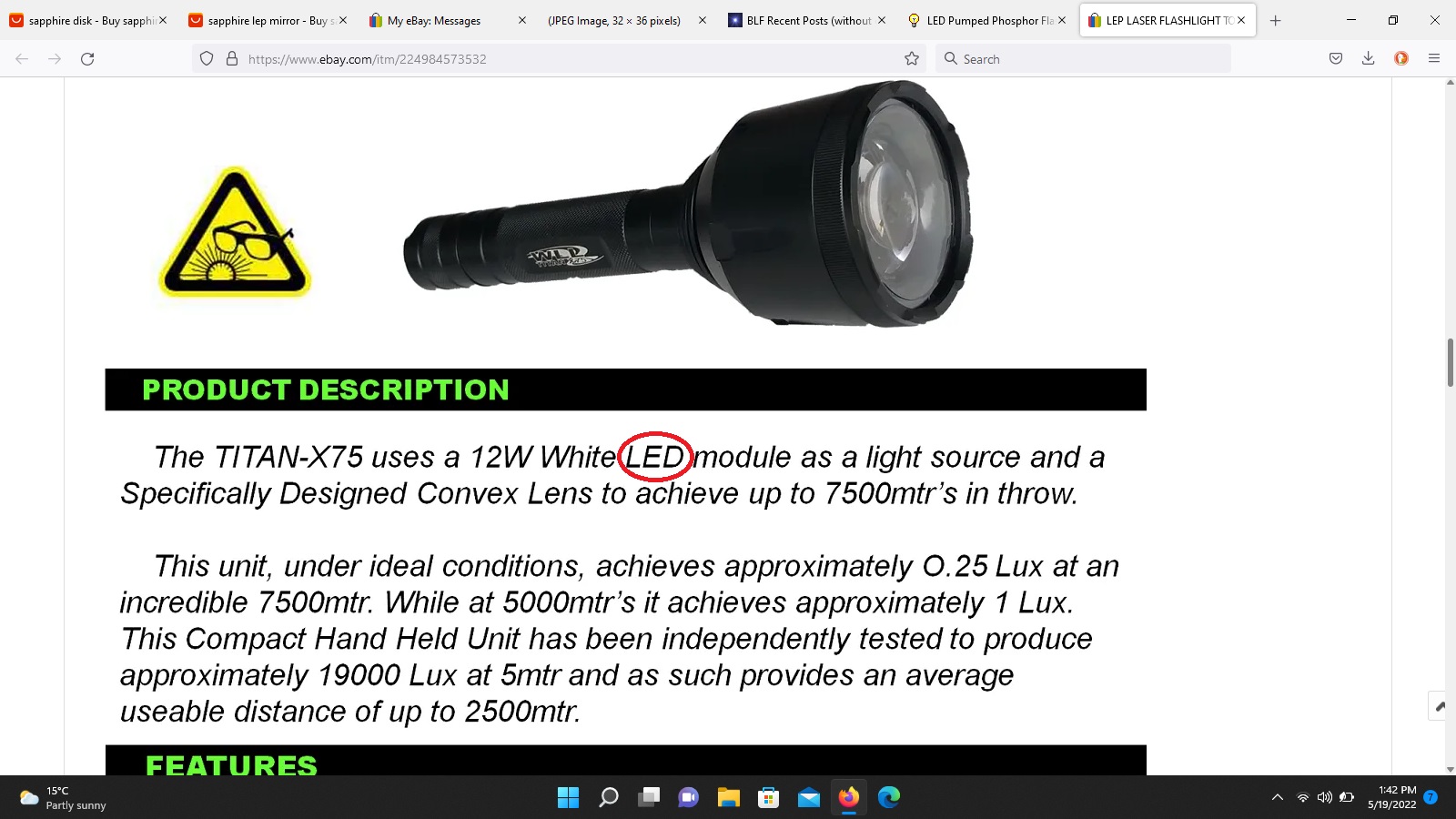 This is advertised as a LEP flashlight and they call it a laser flashlight in the description, but I don't believe there is a laser diode in it, just a 12 watt LED to pump the phosphor to produce the beam. I like the technology, perhaps this is a winner, but I have doubts the beamwidth of the light can be as tight as the beam produced using a laser diode.

Anyone? I've searched the net for the manufacturer of this flashlight and YouTube for more information but unable to find more.

Wouldn't buy this with your money much less with my own. IP68 & 10hr run in one part of the ad, IPx5 & 4hr run in another, lux not lumens or candela for output = major red flags to me
L

I asked some questions of the ebay seller:

Photo's he emailed me through ebay below. This seller is appears to be very slippery with his words saying this flashlight "incorporates LEP technology". From all indications, this is not a LEP flashlight, just something similar due to using phosphor which is being pumped by a blue LED without using a laser diode in the flashlight. However, the unit appears to produce a fairly tight beam which is similar in appearance to a true LEP, but he shouldn't call it "laser" if there is an LED inside pumping the phosphor, doing so is very misleading, intentionally so, from what I gather.

The reason I suspect the phosphor is being pumped by a LED, aside from the advertisement saying exactly that and regardless of his slippery attempt of word smithing further association with a LEP, is I am not aware of a 12 watt blue laser diode, not one rated for that much output as a single diode. Perhaps the power draw of a blue laser diode could be that high, but none producing 12 watts output I am aware of on the market right now.

Sad reality for this seller is I was still interested in the flashlight, even if LED pumped phosphor, but his attitude sucks with his statement "We Strongly advise that this product is not suited to a person of your calibre." All I wanted to do was confirm what the flashlight really was before buying, but that won't happen now.

If there is a laser diode in it, or an array of them, they need to edit their ebay listing to state a 12 watt laser is used instead of a 12 watt LED and stop the snippy superior attitude, that does not sell.

I'm with you, the listing has red flags. The sellers history is pretty good, that's in his favor.

The seller probably put you on the blocked bidder list after reading your questions.

It's common for eBay sellers to block anyone who asks a question about a listing.
L