Has anyone heard of, or seen, an obscure device called Light Emitting Triac (LET)? I believe it was
an early attempt to combine power control with lighting in single device; possibly GE? It may have
been late 1980's to early 1990's.

There's such a thing as a light activated triac, a sort of photoelectric latching relay, but I've never heard of an LET. Interesting.
D

LET there be light! No such device! If so it would have had to be introduced on April 1st.

A friend who is a power engineer commented that almost anything will light up if you pass enough current through it.

This was inspired by an obscure but real device, the light-activated SCR (LASCR); SCR's being inherently light-sensitive. The small device I played with way back was packaged in a clear TO-92 with a concave lens formed into the rounded back, focusing on the die. Light-activated triac (LAT?) also makes sense.

Dave_H said:
A friend who is a power engineer commented that almost anything will light up if you pass enough current through it.
Click to expand... 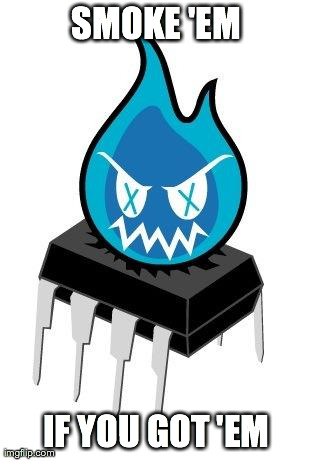 Lol. There is the NED (Noise Emitting Diode). It only works once though. Very briefly.

I was thinking to include reference to the predecessor of the SCR, the Germanium Controlled Rectifier (GCR)
but not being lighting-related it would have been OT and would raise suspicion...