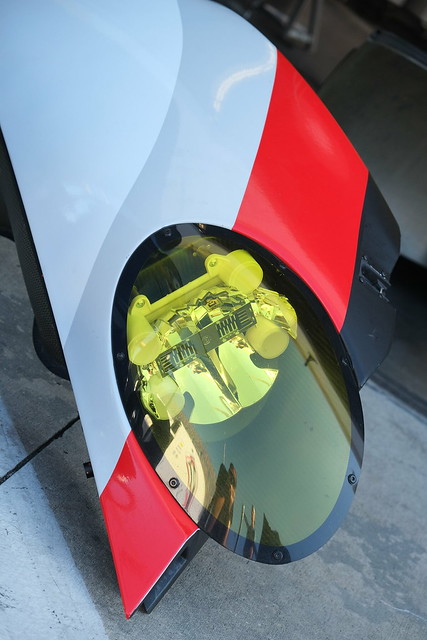 Le Mans 2019 TV coverage begins on Saturday, June 15 at 8:00 AM EDST on MotorTrend (formerly Velocity) and continues non-stop until 9:30 am on Sunday. :thumbsup:
S

It is just past midnight at Le Mans.

The race in GTE-Pro has been the best with entries from Aston Martin, BMW, Chevrolet, Ferrari, Ford and Porsche. Fortunately, there have been no injuries in the two significant accidents so far, though the #64 Corvette was eliminated when it failed to clear a Porsche 911 while passing, nerfed itself off of the track and impacted the wall in an area not covered by a SAFER Barrier.
S

There are just under ninety minutes remaining in the Petit Le Mans at Road Atlanta. They started the race an hour later this year, so there's an additional hour of racing in the dark!

I attended the race a few years ago and during the final night practice I was looking for the best viewing locations for Saturday's race. Of course I had to check out the various ways the teams had chosen to direct their lights, and it reminded me of that saying about opinions - everyone seemed to have a different idea of how to do it. Speaking of how to do it, at the time halogen, HID and LED were all being used in some combination or another.

What I didn't expect to see was so much foreground light, especially considering the speeds involved. Also, despite all of the different approaches, not a single car's primary lights' output (beyond the foreground) could be considered to be uniform, free of artifacts, easy on the eyes and, therefore, helpful to the driver. It was a tunnel of light here, a tunnel of light there, a hot spot here, a hot spot there, "holes" here, there and everywhere and it all just struck me as being distracting and fatiguing.

As for the auxiliary lights used to light the corners, only one car's lights were cross-eyed, all others' were splayed.

There was one car whose auxiliary lights stood out from the others. This car was in one of the GT classes so yellow output was required, and it had what looked like a large, yellow, rectangular "carpet of light" preceding it. There were none of the aforementioned artifacts, holes, etc. It was just a unbroken yellow rectangle. I would think it had to help at least somewhat minimize the problems previously mentioned.

Naturally, I needed to know more so I tracked down this car during the pre-race grid walk. I no longer remember the model, but it was a Vision-X LED of some sort.

If you're interested, the race is on NBCSN.
V

A lot less informed thought than it deserves goes into the lighting equipment on cars in races like this.
S

The 2020 24 Hours of Daytona has kicked off the endurance racing season in the USA!

Coverage is available on the internet at IMSA TV for the entire race. NBCSN returns at 11:00 pm EST for a 4-hour stint, then resumes at 6:00 am until noon, at which point they switch over to NBC for the final 1:41, plus nineteen minutes of post-race coverage.

Unfortunately for us, all nine hours of the race not on TV are hours spent racing in the dark, though that is a bit relative because the track lighting at Daytona is too bright for a race in which the cars have headlamps.
You must log in or register to reply here.
Share:
Facebook Twitter Reddit Pinterest Tumblr WhatsApp Email Share Link