It's been over 2 weeks since VOB has been on CPF. Hope all is well.

Hey I just ordered one of those Lumencraft simple ramping flashlights; $32 includes shipping and 2200mAh battery with charging cord. It has an XPG3 but does not state color temperature, guessing 6500K cool.
Last edited: Jul 5, 2022

Hi all, sorry for the delay. The lights are available on my website and amazon now. 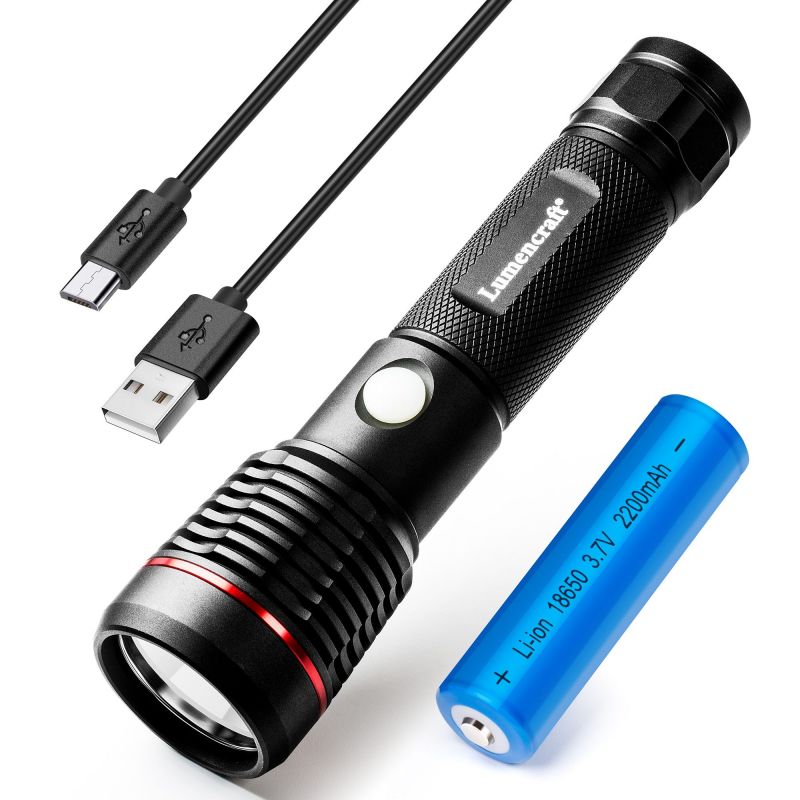 Buy Now. A high brightness USB rechargeable flashlight. Comes with everything you need including the protected 18650 battery and USB-C charging cable. 600 lumens of sustainable power and a simple High/Low user interface.

Also here is a video about why this took so long.

Prompt shipping. Nice looking flashlight, that FL1. Decided to fully charge the battery in a charger first off. It had a starting voltage of 3.45V. An old (crushed positive contact) Zebralight protected 18650 did not work in the flashlight. Neither did a Sony VTC5A or a Panasonic 18650BD protected. The KeepPower protected 3400mAh worked like a charm, maybe because of the button top? Positive connection in flashlight is a pretty small diameter pin maybe a little less diameter of the graphite in a standard pencil? Negative spring looks good and wide. Nice, clear instructions.

Looking at the Amazon listing, just thinking it should be mentioned that Lumencraft is a small business in Missouri. And I did not find an instructional video posted on the Amazon product page, as indicated in the written instructions. No big deal, as it is quite simple. We can see the user interface in action, in the YouTube video explanation for the delay in release, posted earlier in this thread by Lumencraft. It is at minute 2:40.

Reflector reminds me of the fancy PFlexPro option he used to have; nice beam. Typical Cree cast, 6500K? The ramping is neat, with the lowest setting described by Lumencraft as 50 lumens. Yeah, I know this is a bargain/simple flashlight but just can't help describing it. It's nice and look forward to using it during tonight's dog walk.
Last edited: Jul 12, 2022

Works great! Feels good in the hand; smooth knurling on main body with the larger diameter truncated hexagonal tailcap and flared, widening head keeps a good purchase. Heat fins near the head feel good, with the flutes adding interest both visual and tactile. Smooth edge on the business end, feels good. The attractive red ring adds to the satisfaction.

No green tinge in the beam at all. Stippling on the bottom third of the reflector really smooths things out. The button is in a good place for hands-by-one's-side carry, whether with the index or third finger. A lanyard is already installed, and barely fits my extra large hands.

Used it for about an hour, with the last 20 minutes or so nonstop high mode. If there was any lumen sag, I could not tell by sight. It is reassuring to feel the warmth radiate down the body; good thermal connection between head and barrel. Never came close to feeling hot, though it was definitely warm on this mid-seventies evening. Lowest ramped setting is very good for a dog walk. If a person wants to go to high mode, click off then click on. Not too fast or you'll go into strobe (which is slow enough to be useful for bike use in the daytime). Included battery showed about 3.95V right when we got home.
H

I have had one of these for a few weeks and I thing you nailed the description. It just feels good in the hand. Smooth knurling is just right. It has a good side switch. I like side switches. I don't use the ramping.
Nothing fancy but a really nice light.

Tonight we received the gift of rain while on the dog walk.
If a person brings the FL1 near one's eyes to shine ahead (kind of like a crime drama on TV where the actor tries to look determined at night) all but brightest mode shows pulse width modulation, where the falling raindrops show a pattern of several drops but is actually only one drop and the flashlight is turning on and off quickly. This is not a surprise, and not noticeable if the flashlight is kept down at one's side while using in the rain. I would say at lowest mode, the visual pattern of a falling raindrop is about 1 inch spacing close to the eyes.