Well, this review is long overdue. For that, I must apologize to Serge, who provided me with a review unit a while ago. While this may seem like a bad thing, based on the changes I've seen, as well as the upcoming models, I'd say this is more of a good thing. This is less a review, more a evolutionary tale for a very special light.

This light is too unique and too varied to fit into a regular review but I will try to best provide my thoughts and impressions. It can only be described as a moving target, much like trying to review a computer, the FL33 is constantly changing and getting better.

When I first received this light, I was both excited by the possibilities and potential as well as disappointed by the actual characteristics.

As delivered, I received a V1.0, with L332 (also V1.0) light engine and firmware. It was all early generation equipment and could use some refinement. The light was a simple two level model, with max and a programmable user level. The operation and programming were based on single button pushes, and push-hold etc. Unfortunately, this was a painful and unpleasant experience as the button was extremely hard to push. Activation and programming of the light was spotty at best, and I really didn't appreciate the UI or the operation. This was compounded by the fact the early firmware had a bug that could lock the light into various strobe modes. The only way to exit the strobe modes was to unscrew the battery cap. Note that full production versions did not have the button issue, this was restricted to early units only. 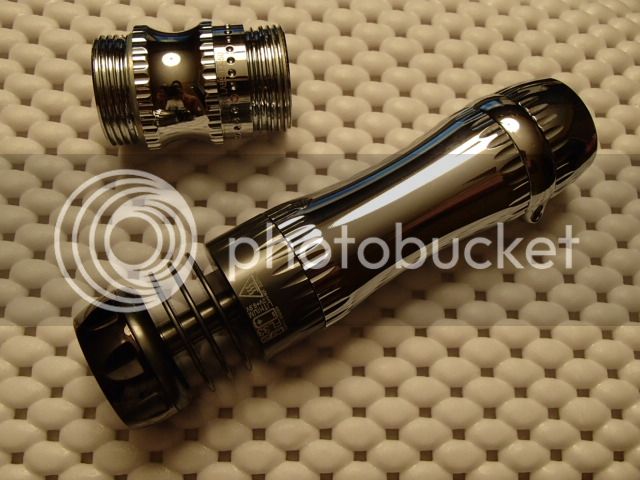 My displeasure in using the light didn't allow me to appreciate the amazing design work in the circuit. The circuit had overheat & overload protection, electronic switching with colour coded battery level meter and constant-on beacon (small red auxiliary LED). The other innovative feature is that the light engine/LED board can simply be unplugged from the light for future upgrades or changes to LED. This makes the light quite future proof. 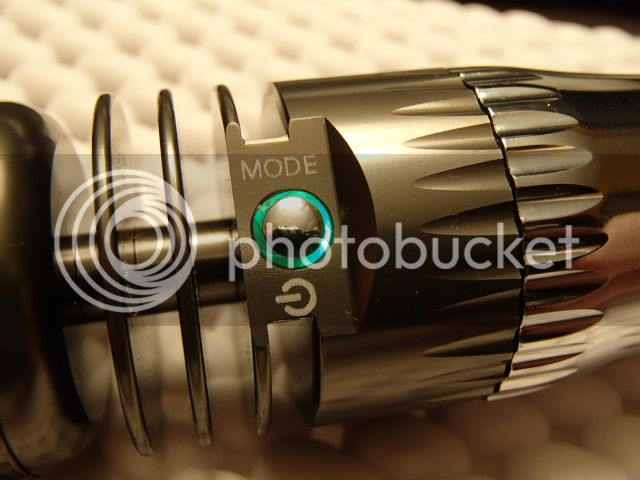 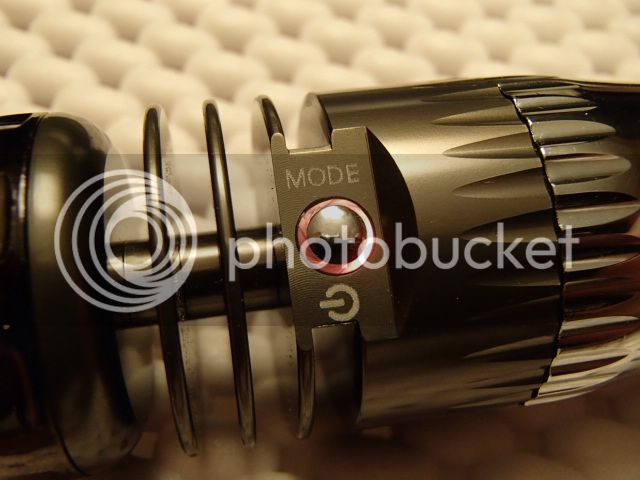 The light engine can easily be replaced. It just unplugs, no soldering needed! 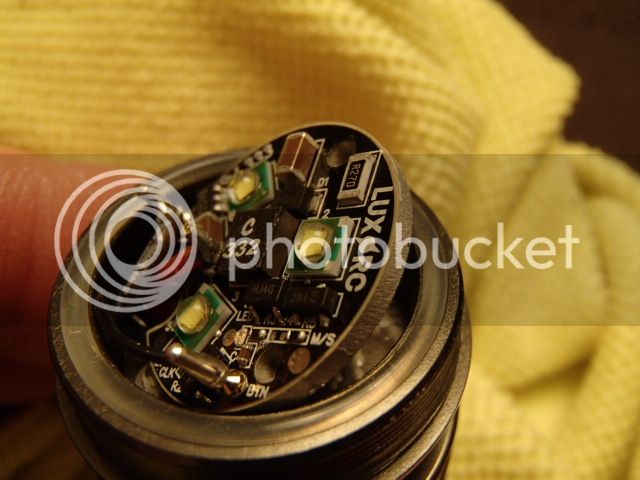 The light shell itself was like a piece of industrial art, the lines, the smooth contours and the shiny chrome finish (I had silver chrome for the body tubes and black chrome for the bezel) was striking. The light itself was quite slippery and a bit hard to grip. This, coupled with the extremely tight o-rings, made for a white-knuckle battery changing experience. The light engine had very large cooling fins, quite necessary to efficiently cool the LEDs running at high power.


The massive cooling fins were effective at dissipating heat. 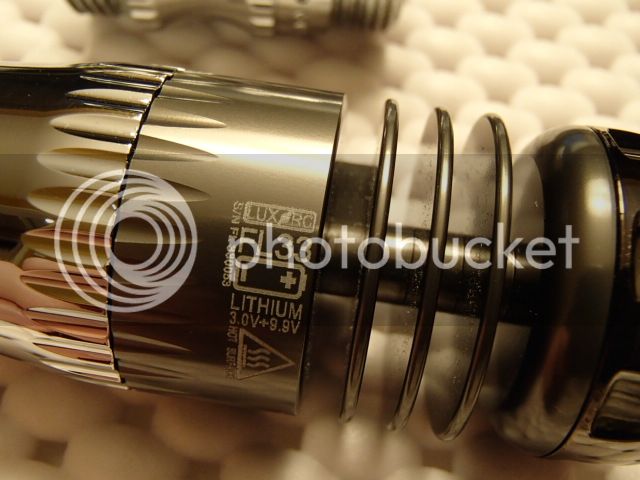 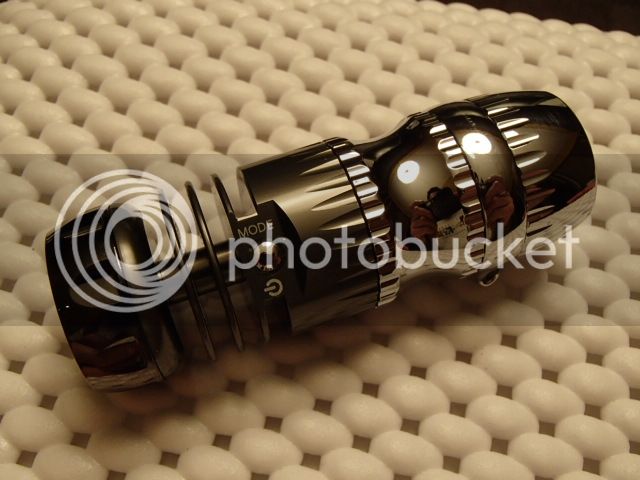 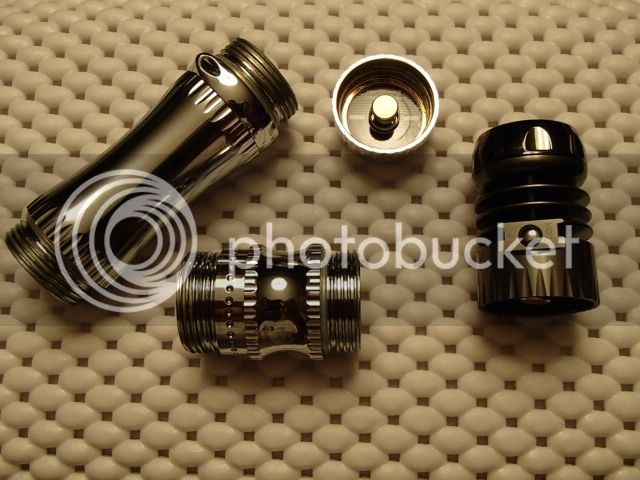 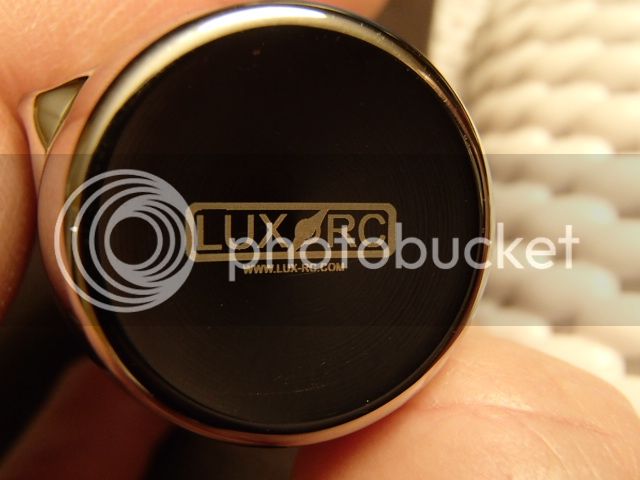 The longer body also allows the use of 2x 18350 cells for more power. 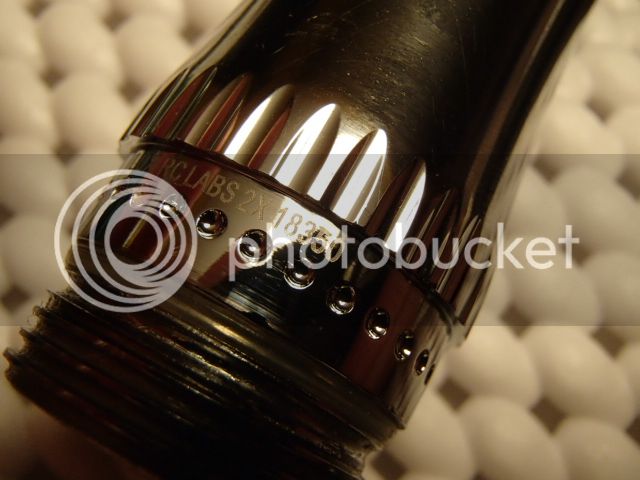 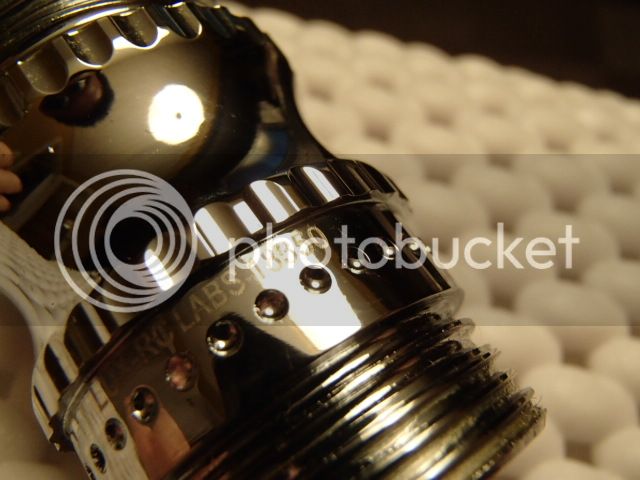 I opted for a 7 Watt (1.8-2.0 Amp Max) circuit to allow for regulation with a single 18650 cell. Other higher power circuits (11-16 Watt) were also available. I also received a neutral triple (R3 flux 4D tint) XP-E for increased throw combined with a pleasant (4300K) tint. My choice for optic was the Carlco 10511 optic (narrow frosted). This optic provided a smooth beam with increased throw. That's another nice point, one can easily change beam characteristics by simply replacing the optic. The optics are easy to find and usually cost less than $5. 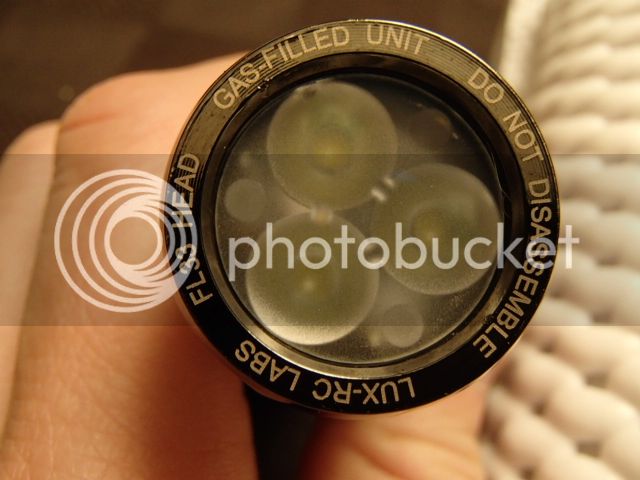 Inside the head, looking at the circuit board. The head has a spring contact allowing the use of flat top cells. 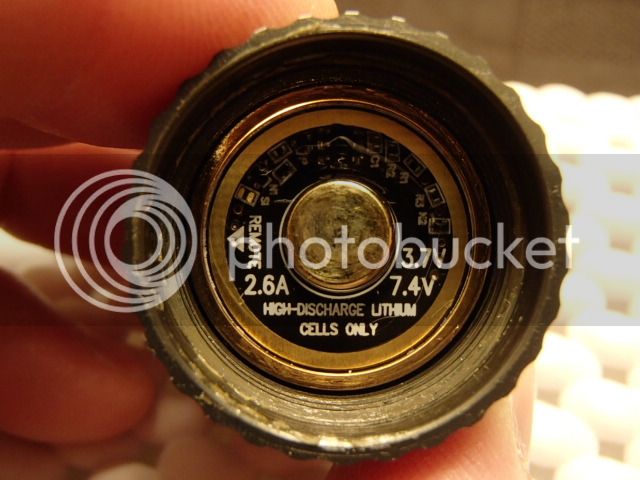 The beam itself was beautiful, smooth, and neutral. There was a bit of throw, but a triple optic will never throw as well as a well focused single emitter (driven hard). Nonetheless, the FL33 provides a very useful general purpose beam.


Overall the first generation was flawed, but was dripping with potential. I tested it and shelved it due to it's shortcomings.


The V2.0 Button fix: Much improved, but more to come?

Well, my review was still long overdue, so I decide to get more use with the FL33. In doing so, I ended up damaging the button trying to get it to work better (push harder, keep pushing!). I sent the light back to Serge and got a replacement button as well as updated firmware/light engine.

So, officially I think my light qualifies as V1.5. The overall hardware is still first generation but the light engine is L333 (with L334, or V2.0 firmware). The light I got back looked the same, but the operation and feel was vastly improved; it was like getting a whole new light.

Serge also provided some Ceramic (TiCN) coated parts (the bezel and lanyard ring were replaced). The parts were somewhat grippier than the first generation chrome parts but quickly and unexpectedly showed wear as some of the ceramic flaked off. It turns out these were factory second parts. Production parts should be much tougher. In any case, the parts served to demonstrate how the V2.0 light should be easier to hold since the finish is less slippery. The body design is still smooth with no sharp edges, so it can still be a bit slippery, but the new finish alleviates this somewhat.

Serge also replaced the o-rings, so battery changes are now pleasant. Also, the battery tubes now have rubber sleeves in them to prevent any possible battery rattle. Overall, the light feels more refined and well finished.

The biggest change is in the circuit. The button is now pleasant to use, requiring only a soft press or press/hold for normal operation.

The V2.0 firmware is much improved. The light ships as a simple two mode light, but a third, programmable user level can be easily added.

A press hold (about 0.5 second) puts the light into "moonlight" mode (1% of max current, or about 3-5 lumens for my sample. Low, but not moonlight). Pressing the button turns the light off.

A quick press puts the light into max. Pressing the button turns the light back off. Holding the button for 4 or more seconds enables the user mode and starts the brightness ramping. Once the desired level is set, waiting 2 seconds will lock in the user level. Now one can switch between max and user level by pressing the button. Holding the button for one second turns the light off. Unfortunately, the light also switches modes before switching off, so if one is in user level, the light will switch to max before turning off (and vice versa). This is somewhat unpleasant and can needlessly drain the battery and/or destroy one's night vision. Also, from max, one can access SOS, beacon, and "mental" strobe modes.

The light engine is still very advanced and includes overheat, overload protection with electronic reverse polarity and over voltage protection.

The colour-coded battery level meter (5 levels) and beacon remain. There is also an electronic lockout, as well as a battery stretch mode that reduces output to 10% or less when only 10% of the battery capacity remains. There is also a tactical, momentary-only mode, but I question the logic of this mode on this particular light. Also, the light engine comes with automatic cell count detection. So the battery protection and battery stretch functions work the same way with one and two cells.

I decided to add some bling to my light, so I installed a drilled optic that held three small tritium tubes. This, combined with the beacon, made the light always easy to find. 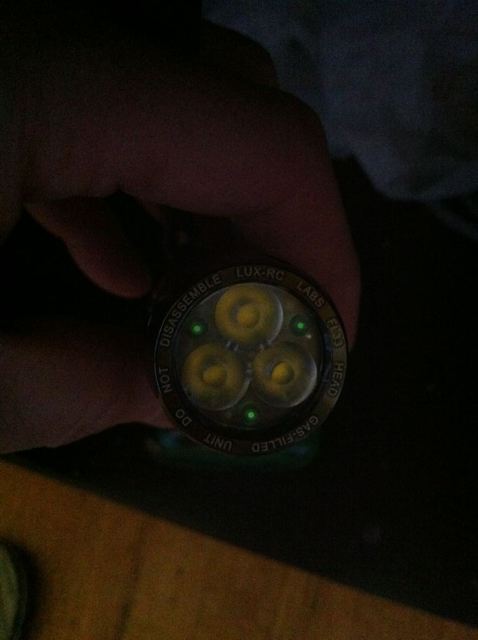 The Current and the Future: Many options, and V3.0 to come!

allows one to build and customize a light. Pricing starts at $439 and goes up from there. While this may seem a bit steep, the overall build quality, the versatile and advanced circuit, the multiple body, LED, locator beacon etc. options are staggering and unique. One can even choose a gemstone for the button. Now that is luxury.

The most intriguing things are the V3.0 updates.

The bezel, tailcap, optional clip and lanyard ring will be made of stainless steel to increase durability.

The light engine can now run at up to 20 Watts max on two cells (about 5-6A drive) and 10 Watts on one cell (about 2.8A drive). The circuit will automatically detect the number of cells and adjust max power accordingly.

The V3.0 Light engine/firmware will be the ultimate in programmability and versatility. According to Serge:

"The V3.0 is completely different. With this version you can download any UI to your flashlight...I will have many free UIs on my site. You will also be able to create your own with a visual tool. Yes, V3.0 is a fully regulated in all range from 0 to 5-6 amps (up to 20 watts) and it’s possible to set the moonlight as low as you need."

So, the light will be completely customizable, I look forward to seeing how this is implemented.

All in all, the Lux-RC FL33 is the most advanced and versatile custom light I have ever experienced. The first generation was flawed, but future models are getting better every generation. The latest lights should be amazing. I have tried quiet a few customs (Tain, McGizmo, Mac, etc.) and this one is definitely a different beast. If you can afford it, it's definitely worth a look.
Last edited: Aug 6, 2013

This review is still in progress. I will be adding more and newer pictures etc.

May as well reserve one more just in case.

I see I'm the first to reply. haven't read it all yet, but

This light is too sexy for knurling, but I would imagine some type of rubber sleeve to help ease my mind when putting it into a pocket even if it's extremely hard to scratch.

This flashlight is so well finished that it's a piece of art such as watches, etc.

Flashlights have been quite standard and based on the same users' expectations for 10 years, so being innovating (i.e. developing new designs that make practical sense) is not easy. For me this RC is a real new approach and I'm looking forward to discovering the way the concept will follow.

I have been watching for a second hand piece for a long time now.

I think the dive head is very nice and makes for a stupidly compact powerhouse. Now if you can have an LE that can also double up on 18350s...what more do we want in pocket flame?

I will order one at some point.

Hey Obi, you definitely should get one...this has been my favourite light for a long while (together with my SWM V10R Ti w/14500 tube).

The dive head will make for a very compact light but IMO the finned head is necessary as this light can get pretty hot on high in just a matter of seconds, so those fins will help to cool down the head as much as possible. Do know that the latest version will have a 20W light engine compared to 15W for the previous version so expect quite a bit of heat coming out from this baby.

Plus Serge is a joy to deal with...
E 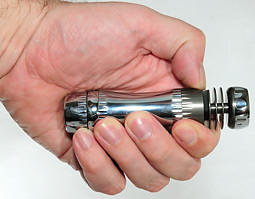 Either he has really big hands or the light is really short. Is the light 4in? Most of the 18650 lights I looked at are 5in+.

Hey. Thanks for the measurement! I have mine set as 18350 at the moment. Nice, compact set up.

gunga said:
Hey. Thanks for the measurement! I have mine set as 18350 at the moment. Nice, compact set up.
Click to expand...