Hey guys, it seems like until Mag came out with the newer style, thinner gauge, lights with a letter in the serial that there was almost no color variations. I have one red non-letter serial Mag and I've only ever seen other red ones and heard about there possibly being blue. Does anyone know about this or has anyone seen any colors in the non-letter serial lights? Thanks guys!!

Edit: I do know that the vari-beams were blue and silver and black and silver but I'm specifically referring D and C Maglites.

Edit 2: Mag also had a Camo edition that was painted on the non-letter serials in the mid 80s around Serial 1,700,000. I have one incoming so I'll post some pics. The finish is paint so it is not very durable and I've never seen one other than this so I'm guessing it is the arrest and only done in a limited run.

Edit 3: Can confirm blue also, same color as the Vari-Beam but all blue instead of blue and silver. It seems like until the mid 80s Mag actually did have some color variation but then standardized at all black. I haven't seen any other colors but another collector told me gold and silver were also possible.

Edit 4: Please see post 8 for more info on literature that was included in the old Maglite packages. I can also confirm silver and blue. I have a blue early 80s light and another collector sent me a picture of an early 80s Silver 6D. He also told me he thought there was an older style gold/bronze color he may have seen years back.

Edit 5: I can confirm Gold now too. It looks like it was done on the R bezel late 80s lights. I have one incoming so I'll post some pics to the Rare Maglites thread. From what I can gather it looks like it's the same deal as the Camo run Mag did in the early days, just something to throw at the wall and see if it stuck because they're not listed on any of the packages and they very rarely if ever come up for sale.

I think that about rounds out this list. If anyone has any rumored colors def gimme a shout or post here, I'd love to investigate them.

I wonder where Magellan is. That guy has the Epic-est Epic Maglite collection and tons of tech-know to go with it.

bykfixer said:
I wonder where Magellan is. That guy has the Epic-est Epic Maglite collection and tons of tech-know to go with it.
Click to expand...

Heck yeah!! Him and willrx are my flashlight role models!

I've seen some "blues" and "purples" but I think they are just off color old black finishes.

This is an interesting thread but will be hard to get information in this area. But i am keeping an eye out and will report back if I get any useful information.
M

Hi guys, I'll chime in with what little I know, but it's an interesting topic.

I think you're right about the lack of color variations in the early years. I'm aware of red non-letter lights but haven't seen any blues or other colors.

The bezel stampings also varied in the early years. There was an original brass 1980's Minimag with the Ontario name on the bezel. I was told these are very rare and have a rolled bezel stamp with white paint filled lettering and are considered to be possibly the first ones made.

I also have an early camo Minimag AA with the old 1980s Ontario stamp that I'll check and see what kind of serial number it has.
Last edited: Mar 30, 2017

Thanks Magellan! I'd like to note I've seen silver non-letter Cs. There are a couple in the rare Maglites thread although they are the later style with the spare bulb tail cap and logo'd head. I do have a camo non-letter serial 3D now that I'm just trying to get some info from Maglite on and then I'll post pics to the Rare Maglite Thread.
Last edited: Mar 30, 2017

Magellan please could you post a pic of an ontario bezel ive never quite understood what the difference is. Also where is the serial No. on an AA model??

I can't really speak to the bezel design but I think the only mini mags that have a serial are the new LED ones. I've seen a lot of old mini mags but never one with a serial.

I think the older style bezels used to say Ontario, CA where the new ones just say California. I know that's the case for the few old ones I have.

Also I found this old thread from willrx http://www.candlepowerforums.com/vb/showthread.php?181574-OLD-STYLE-2D-Mags-One-in-red!!-Yes-RED about there being literature in the old boxes that advertised sliver, red and blue.
Last edited: Apr 1, 2017

I was able to score an early gold non-letter serial so I can confirm that color too. As soon as I receive it I'll post up some pics in the Rare Maglites thread. Does anyone else have any unconfirmed colors? It think that pretty much rounds out the list if colors for early non-letter serial Maglites.

Back from the dead with this thread and just in time for St. Incan's Day. A full range of colors of non-serial D cells: 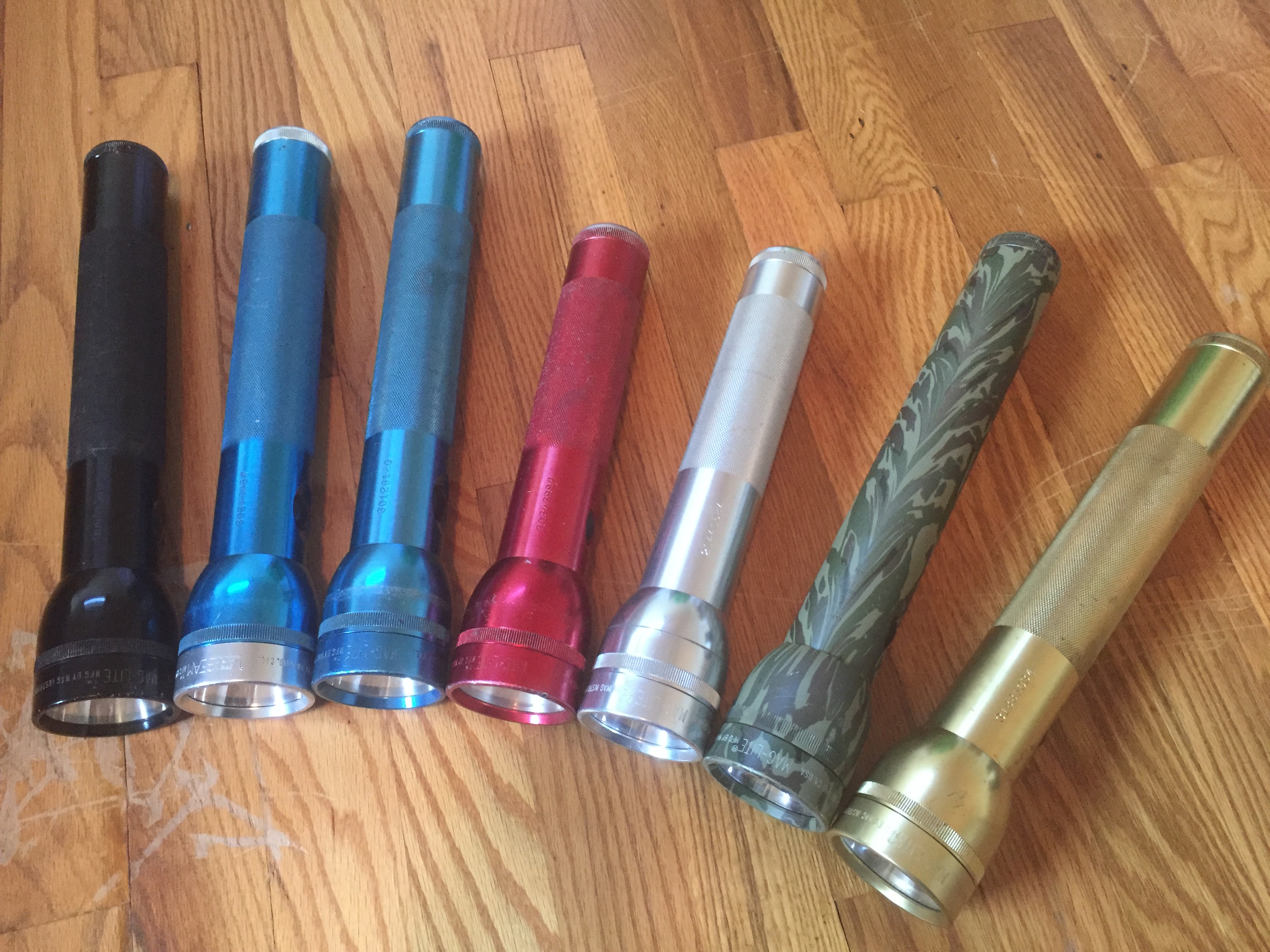 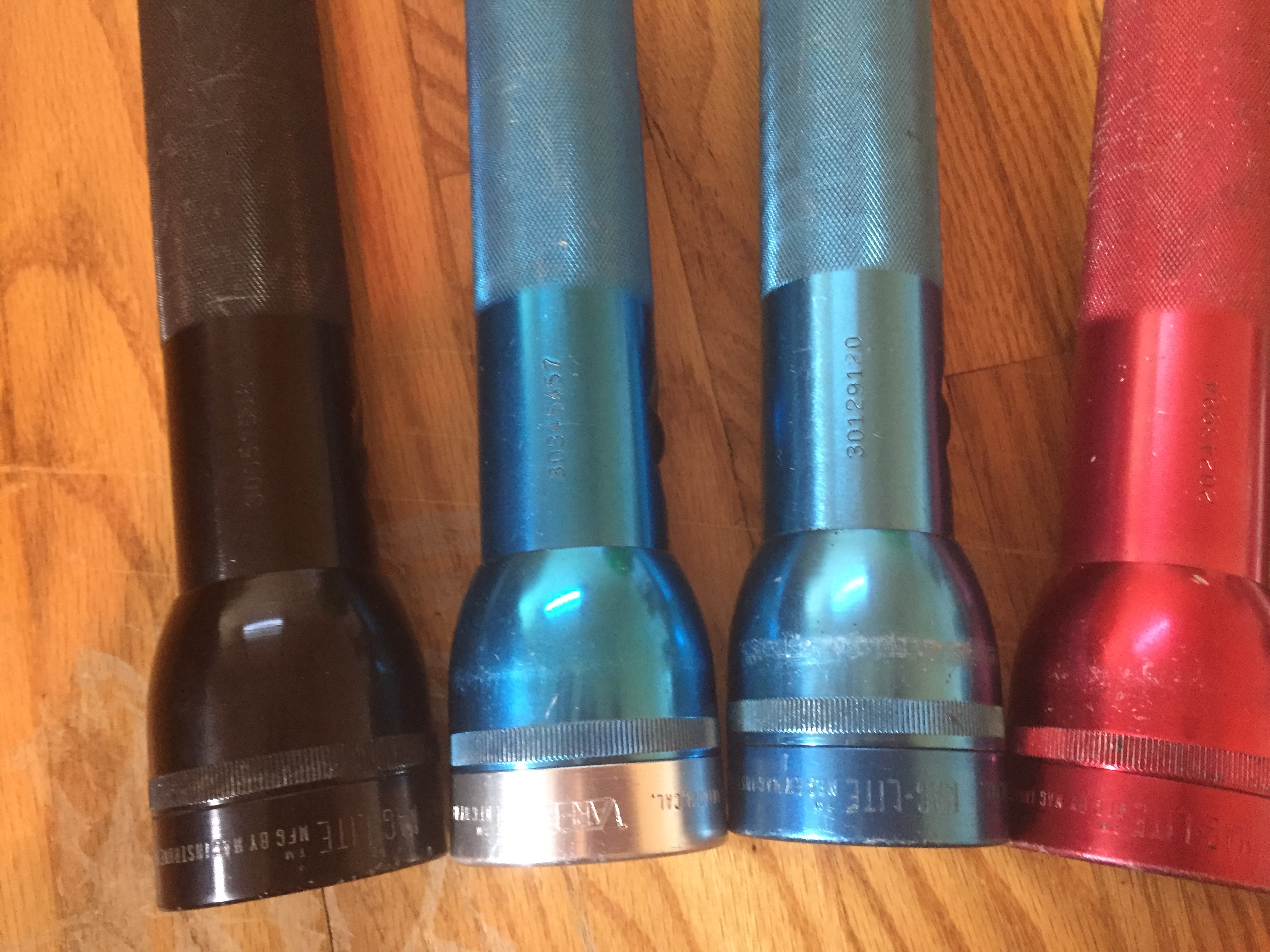 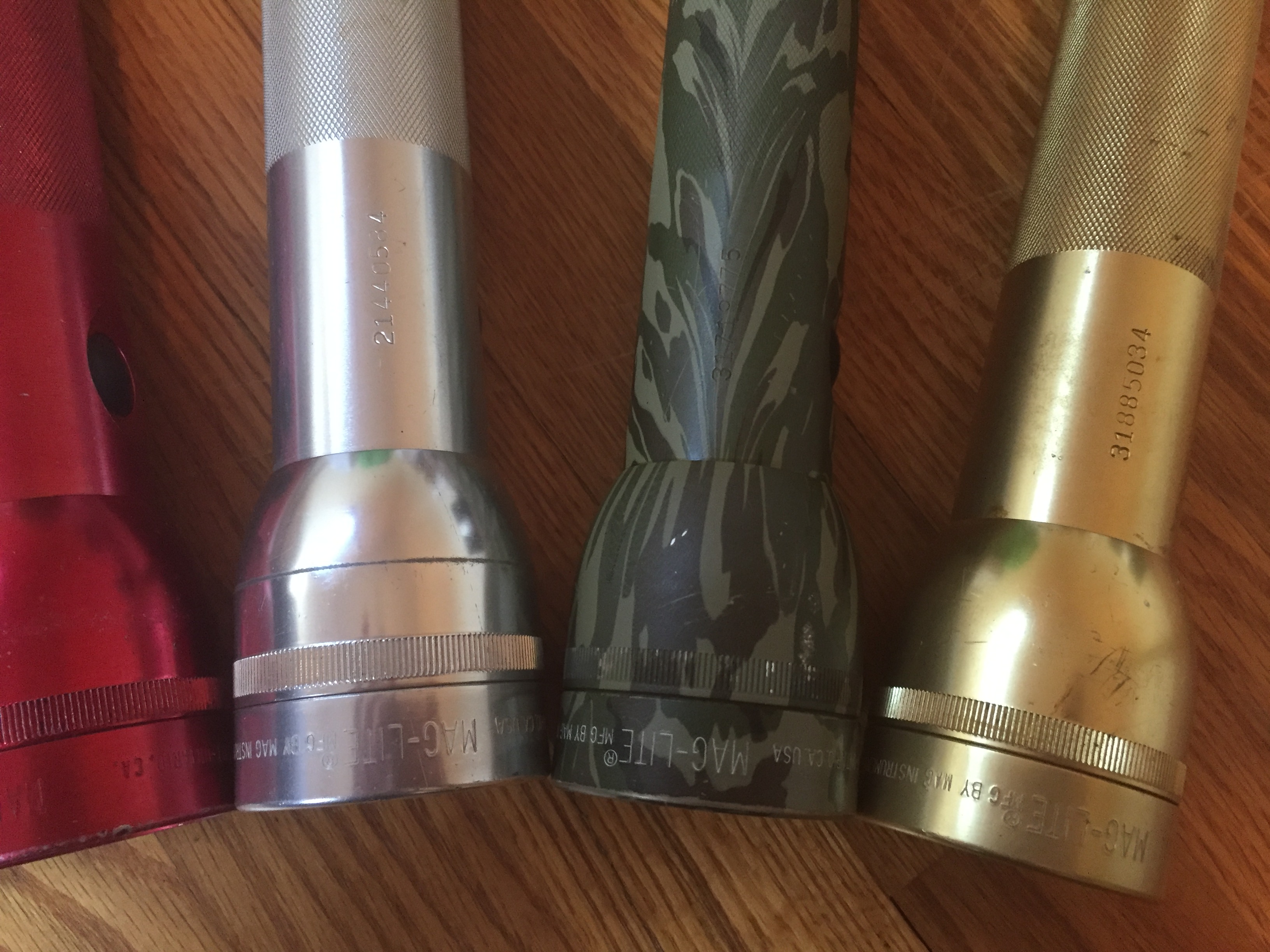 I have a black one. 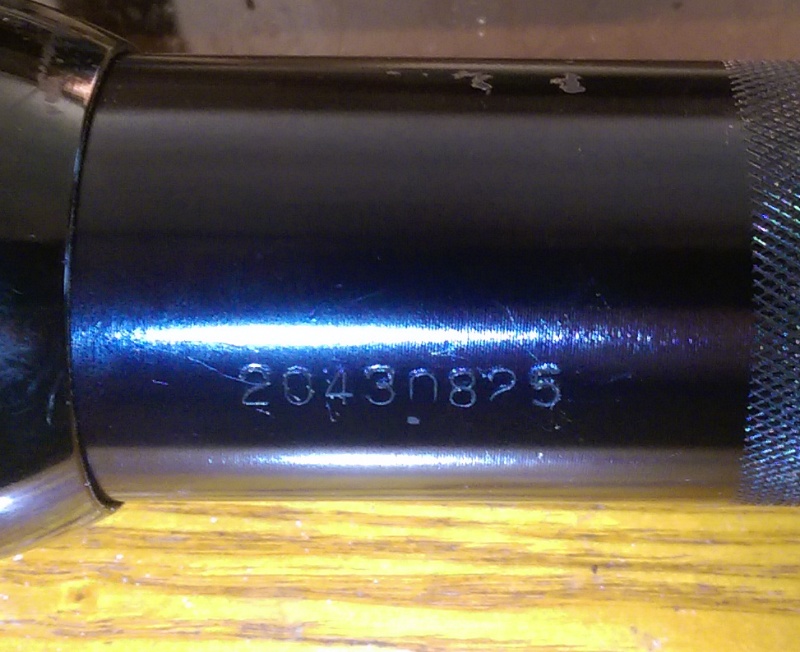 bykfixer said:
I have a black one.

Me too but I have an LEd bulb in it. What is a good regular bulb for it?

bykfixer said:
I have a black one.
Click to expand...

You're only 6 away form a complete collection! :devil:

hsa said:
Me too but I have an LEd bulb in it. What is a good regular bulb for it?
Click to expand...

Mag actually Makes a bi-pin Xenon bulb for these which is pretty good and has a nice long life.

All of my Maglites work but I only actually use a couple of them. For restorations annd my display lights I just use the cheap PR vacuum bulbs. They are $5 for 10 and were the bulbs that originally came with these lights.

PR3s are for a D cell. Check out the following link for PR specs for other size lights.

If you search the Incan forums there are several high powered incan conversions.

I love the warm glow of an Incan light but for work I use a Malkoff LED drop in on a 3 cell D Mag. You just can't match the light output and run time. Depending on what you're doing with the light staying with or upgrading the LED is probably the way to go. Of course I have a bunch of lights I use around the house and for camping and playing around that are Incans and they are a bunch of fun.
Last edited: Jul 13, 2017
H

Liftd, thanks for your reply. I have a regular bulb for it and I think I will just use that and a ucl in front. I have the latest iteration of 2d mag and use it for coyote chasing, (400 meters of beam distance) not an ML. I was just thinking of going back to a nostalgia set up. I also have an ML50L 3 cell for dog walking and it is great. Mini Mag Pro for the back yard to make sure of no skunks before I let her out in the morning and an old xl50 for back up. You have a great blog.
Harry

Awesome! Can't beat a Mag for run time and reliability. I know the Malkoff drop ins are pricey but have ya tried one? I have an XM-L in a big old 4D and man do they throw a ton of light. They're around 800 lumens but overkill for most of what I do. Adventure Sport has some awesome 2,000 and 5,000 lumen setups with multi modes too.

Thanks on the blog! I know a bunch of collectors but everyone seems to know a little bit here and there and there's really no source for Mag info. heck, even Mag's website doesn't have much. So, I wanted to put it all together in one place.

hsa said:
Liftd, thanks for your reply. I have a regular bulb for it and I think I will just use that and a ucl in front. I have the latest iteration of 2d mag and use it for coyote chasing, (400 meters of beam distance) not an ML. I was just thinking of going back to a nostalgia set up. I also have an ML50L 3 cell for dog walking and it is great. Mini Mag Pro for the back yard to make sure of no skunks before I let her out in the morning and an old xl50 for back up. You have a great blog.
Harry
Click to expand...

Ultraclear makes an amazing difference. You can still find Mag White Star krypton bulbs at the big auction site or get a 2 cell adapter kit and bipin White Star II xenon at most big box stores. I like the krypton beam better myself.

And Malkoffs regular drop in for Mags is nothing short of amazing at a much lower cost than his high output module.