Today was another great day for a noon visit to the reef. My wife and I and a friend had a nice swim and checked in on the frog fish. I kept mostly to the outside hoping to see some larger animals like the eagle rays or manta ray or baracuda. There has also been a small tiger shark seen recently and the spinner dolphins have been coming in to the reef but I have been at the wrong place at the wrong time.

We finished our swim and were drying off and getting warm on the beach. We had just joked about being ready in case the spinners showed up and danged if I didn't see some out side and to the south and seeming to be headed our way! I told the ladies I knew I was getting suckered out once again but what the heck. I grabbed the gear and went down to the water and off and out I swam. I hadn't but made a few strokes out when I heard them underwater and so I just went for it. I got out past the reef's edge in about 35' of water and stuck my head up for a check on the surface. I saw some splashing and fins headed my way. Cool! 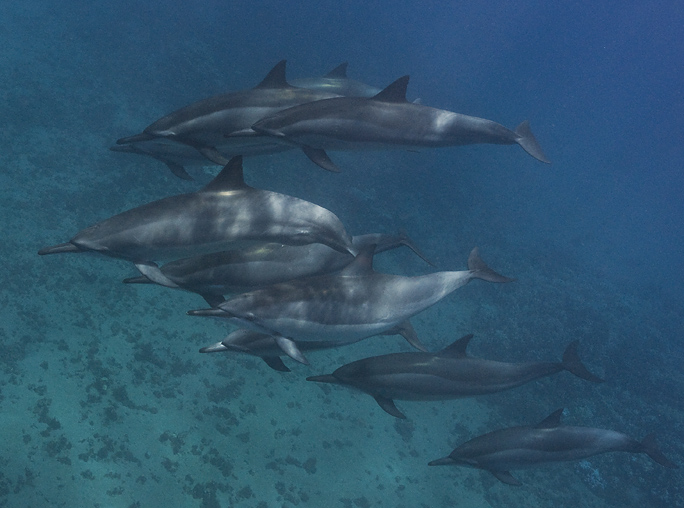 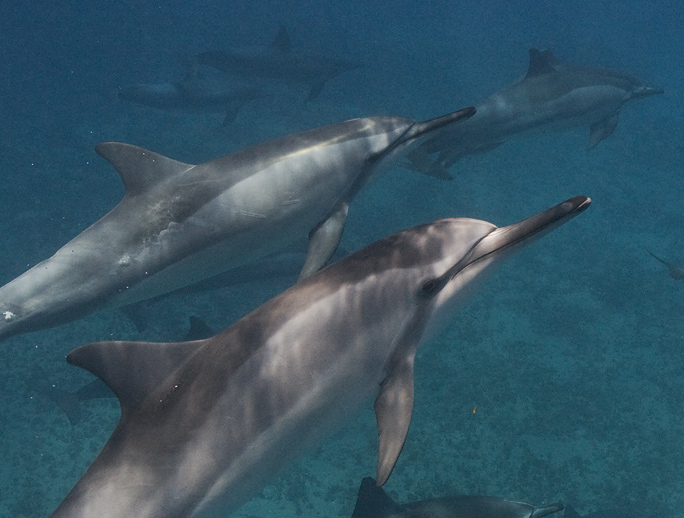 I ended up surrounded and not knowing where to look and focus. 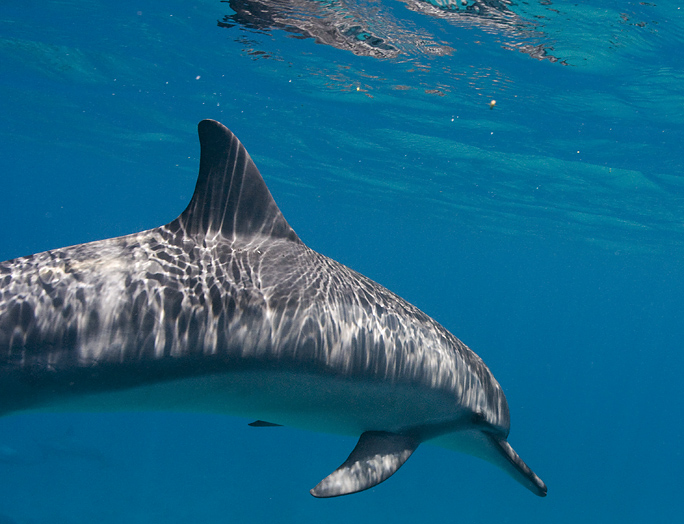 I think this was the closest I have had some get to me and I might have been able to make hand contact if I had tried. I noticed a few of them were swimming and in physical contact with others. There was also some serious play among a few. 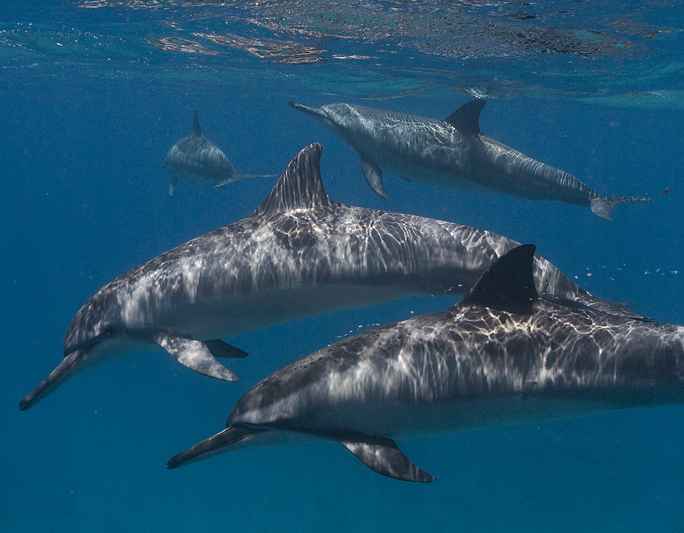 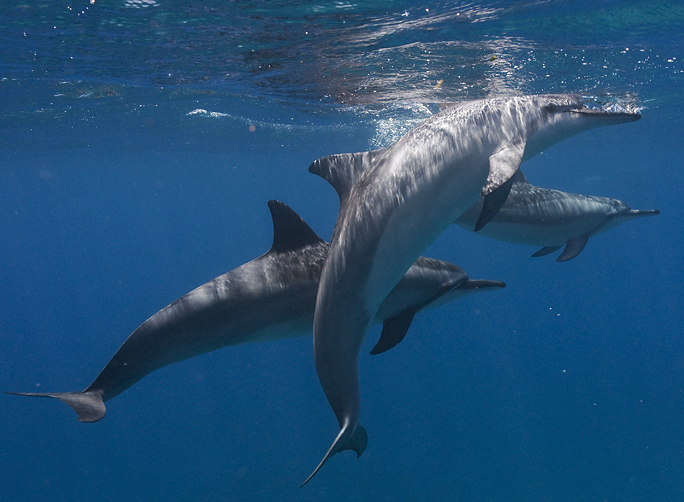 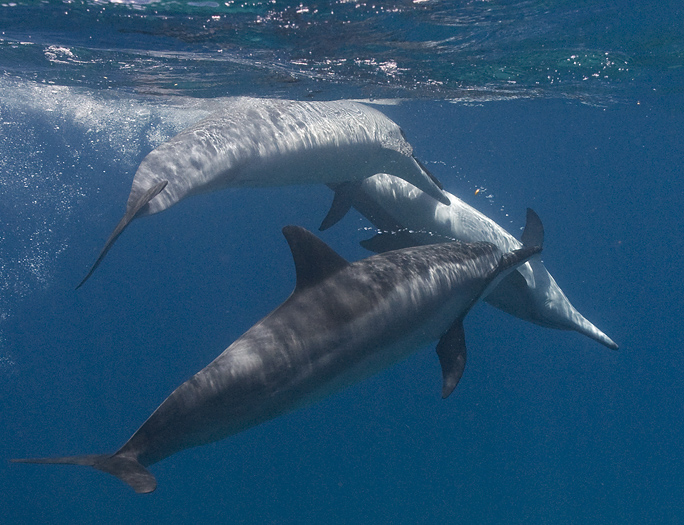 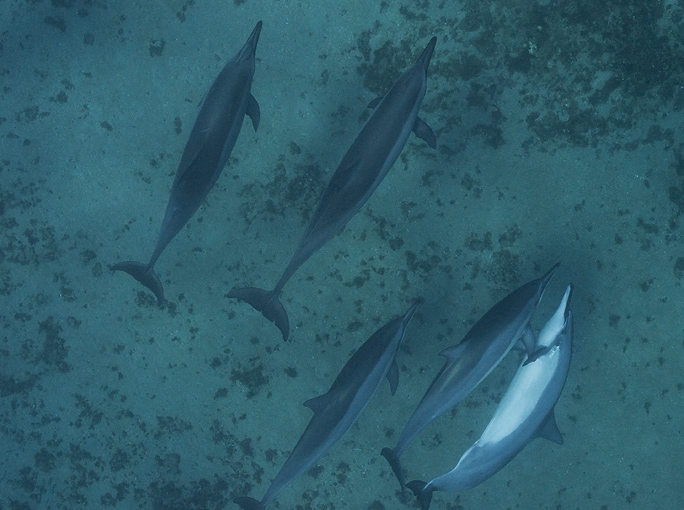 I don't think I could ever get tired of watching these guys swim in sync and play. Ultimately, they drew me south of the reef as they headed back south and then they were gone. I was totally stoked and invigorated by the encounter and took my time swimming back in. What a great way to end the day at the beach!! As I was swimming in, I saw a coral outcropping surrounded by the sand field and realized there was a green sea turtle resting on the bottom next to it. As I got closer, I could see that it was a really clean and healthy looking turtle and I decided to dive down for a shot. Halfway down, I think I got a lump in my throat. This turtle has a marking on its head I haven't seen for a couple years. For you old timers who have followed my ramblings, this turtle was none other than Friendly!! 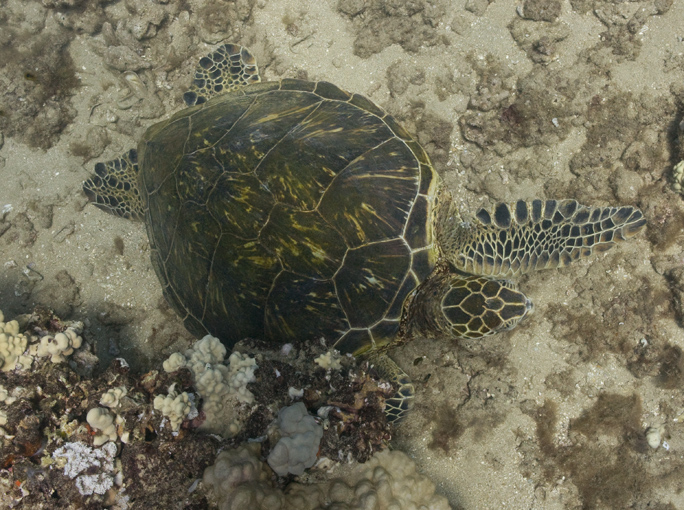 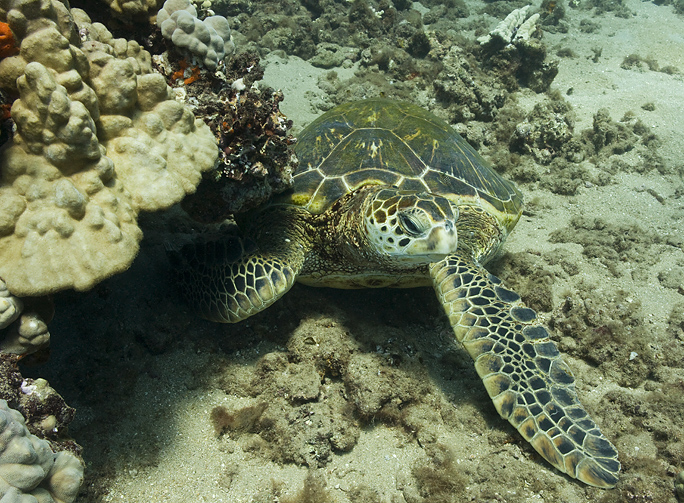 I dove down a few times. She was probably in 25' of water. I would get close and then wave her up like I used to when she lived in a cave in the shallows. After one dive down and after some other swimmers had left, I saw her move her flippers and get out from under the ledge. I knew she was going to surface and I wondered if she would still be cool with me close by. 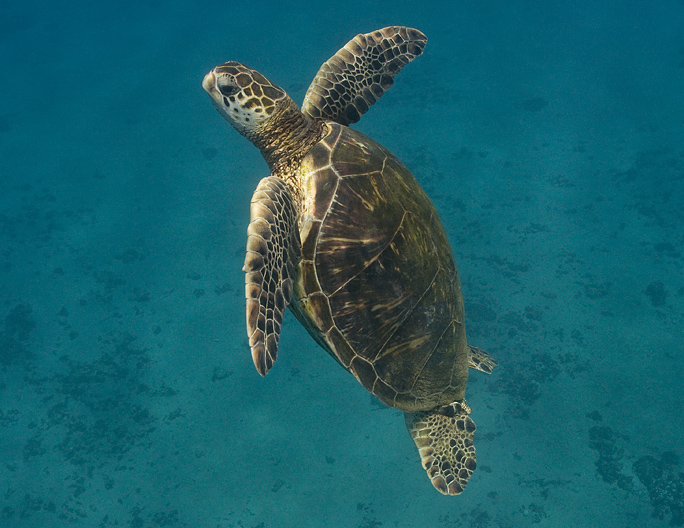 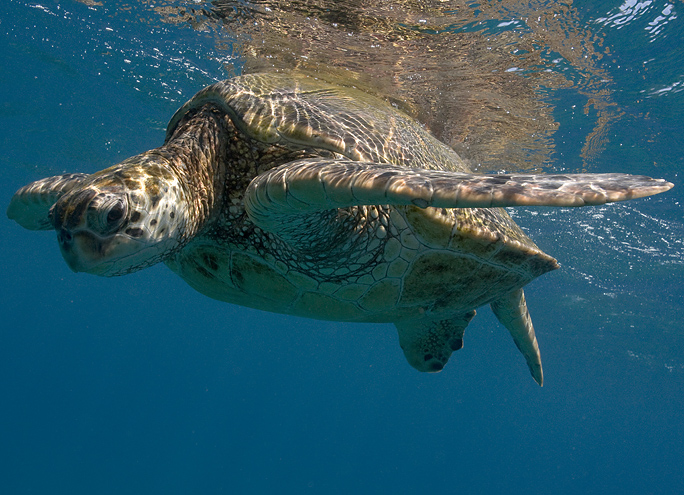 She seemed quite at ease and I took the camera housing from around my neck and held it out in front of me and let myself drift in towards her. 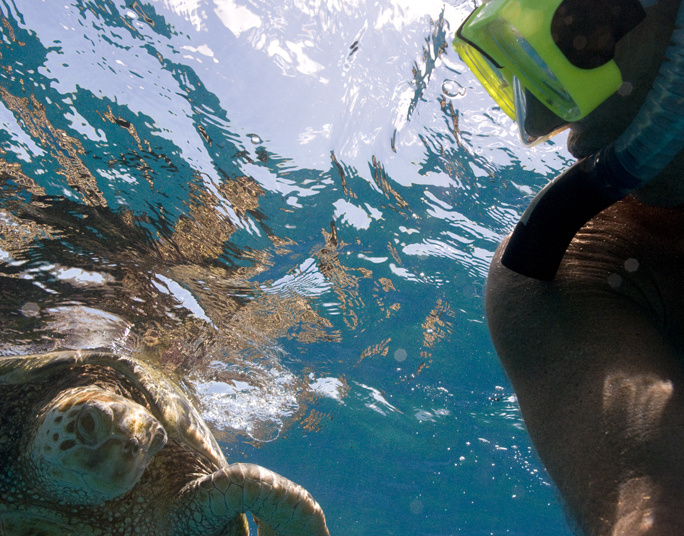 She ended up bracing herself away from me with her left front flipper on my right shoulder. 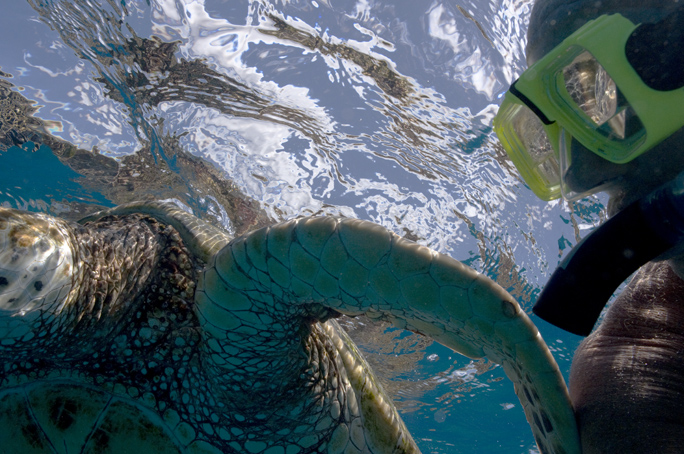 I was able to get a self portrait of me with my favorite turtle friend: 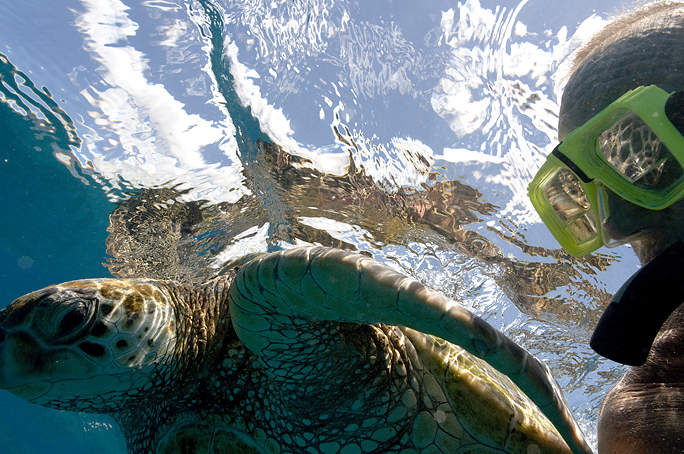 We ended up hip to hip and slowly spun away from each other. I then circled around to face her again and just watched her as she took a couple more breaths. She dove back down to the bottom and I headed in to shore. There might have been some excess saline in my eye and not from the ocean. I have had some incredible coincidences out there and sometimes wonder......

wow, the last pic has perfect reflection in your goggles too.

I wonder if Friendly remembered you. They live a long time, but I have no idea what their memory is like.

I often wish I lived somewhere in the world I could swim in the ocean for more than 10 minutes before freezing....

On the other hand, the one thing which scares the bejeezus out of me is sharks in open water, I would literally have heart failure.

Its strange how you can tell Friendly is friendly by nature just by looking at photos. I'm glad she is back.
I

I had the fortune to visit Hawaii on my honeymoon after battling cancer back in '07. Now, a few years later, I think of Hawaii as the most beautiful place i've ever enjoyed he pleasure of visiting. I am working so hard to convince my wife to move there...and pics like these just illustrate why.

Thanks for sharing, Don. You live well, sir.

Fantastic set of photos, glad you started a new thread so I'll be able to easily find them!

It's great to hear about Friendly, Don!

I'm impressed by how well your sundrop illuminates the water, with such striking and realistic effect as the real sun

Sometimes destiny calls with a friendly voice
Good to hear and thanx for sharing.
bk

So cool. Great photos Don - and so cool to see that Friendly is doing well!

Here's a couple shots I found of Friendly I took in the early part of 2004: 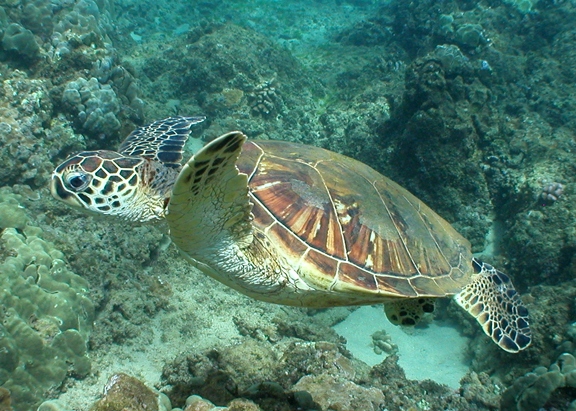 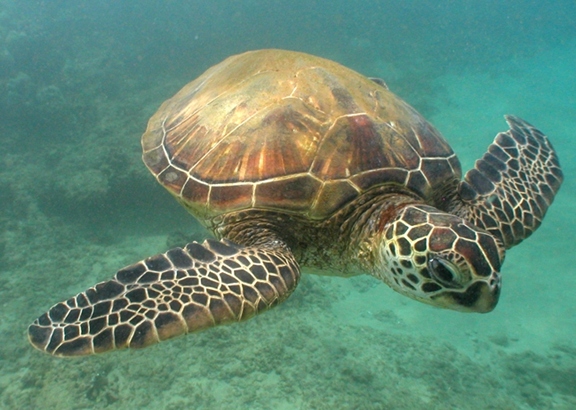 She was always game to pose with friends. Below is a shot I got of a friend with Friendly in 2005: 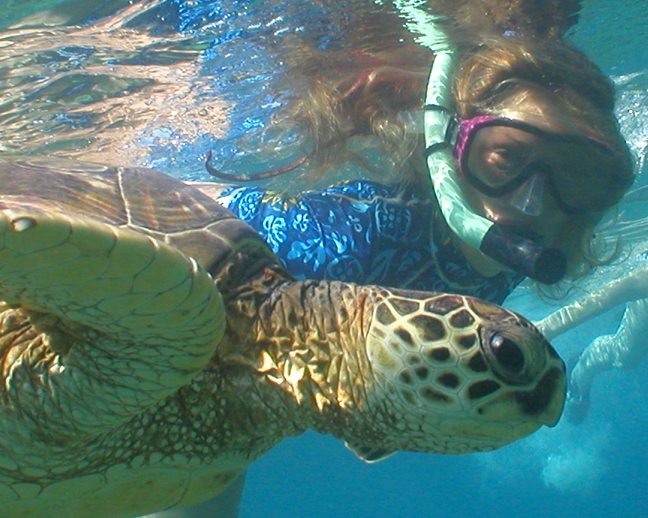 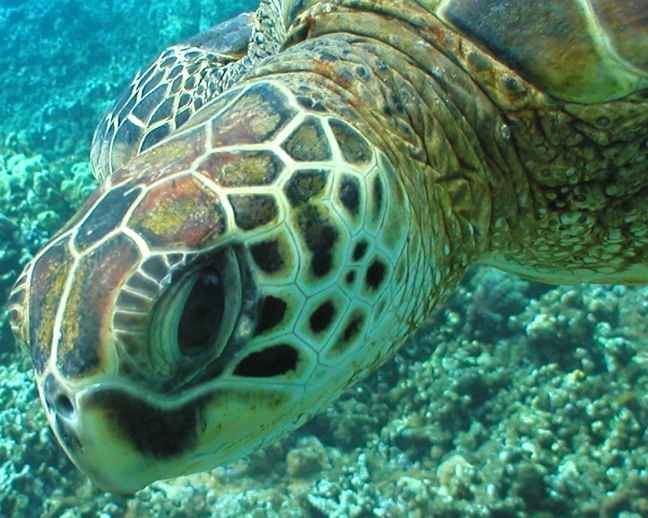 In 2006, I got carried away taking turtle pics and many were of Friendly: 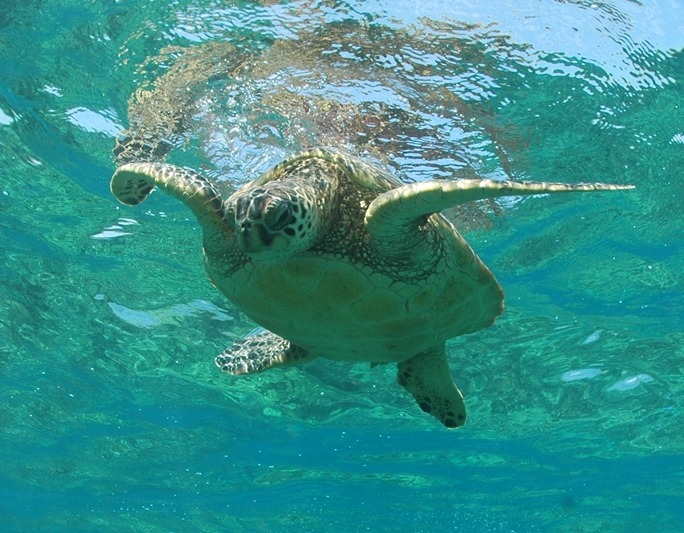 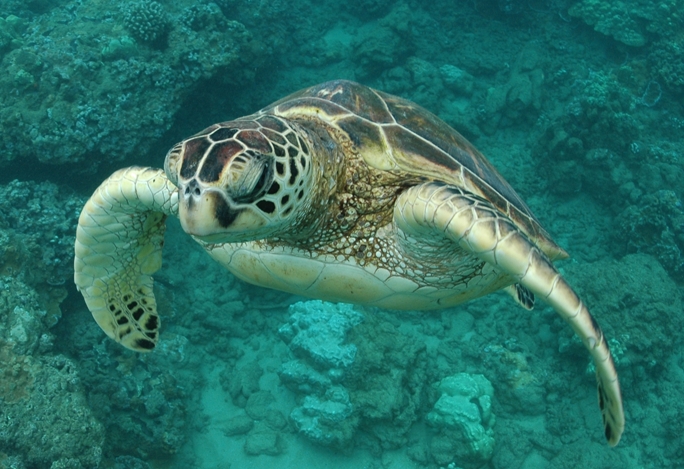 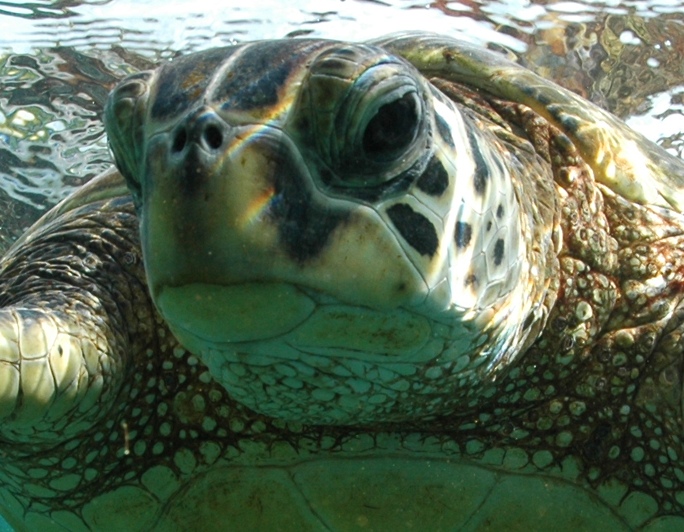 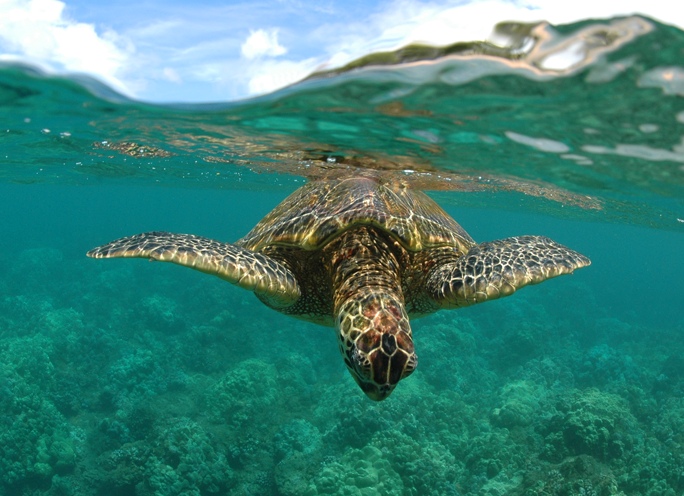 Back then, I would visit here for 4 -6 weeks every Feb-March and then wait out the rest of the year until I could once again return to Maui and get into the ocean and hope to see some familiar faces. During those years, I never knew if I would once again see Friendly after so long of an absence and to dive down and peer under a ledge and see her, wave her up and then eventually see her come up to join me on the surface as in the shot below, was really magic! 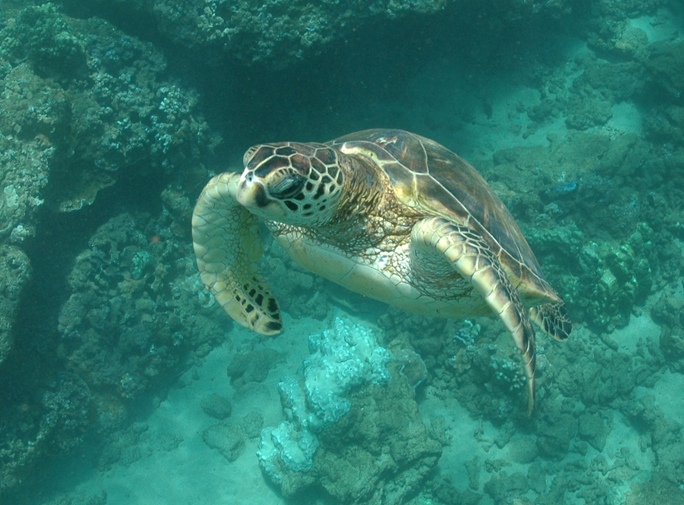 I saw her in the late winter of 2007 and I think the photo below was the last time I saw her on the main reef. To finally move here in the summer of 2007 and find that Friendly had split, was a painful reality. 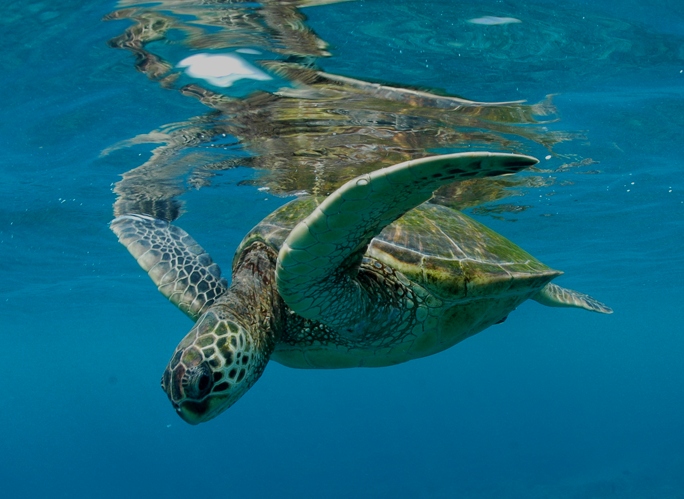 Crossing paths with her yesterday was real comforting and as with real friends, it's good to know that life continues whether we are close and in contact or only there in the occasional thought or memory.

OK, enough of the past. I promise this thread will move forward with the present and future.

Don, I feel as though I could identify friendly 50 years from now, and I'm

And wow, I can't believe it had been a year since you had seen Friendly! I didn't realize that you were only visiting when diving with Friendly, that would have made me :scowl: if I had finally been able to move just to find that my good friend had left.

Don, this truly made my day. Thank you so much for this. I am truly grateful that Friendly is alive and well.
S

Very cool.Great visibility.:thumbsup:
I can't wait for the Leatherbacks to come in in Sept.
That's my annual vacation. Ride down south to Corcovado and check them out.
Sea turtles are awesome.

Great photos! You probably get asked this a lot, but what kinda of camera do you use for these shots?

Fantastic photos! Do you have amazing experiences like that on a weekly basis? I have to figure out a way to get the family to Hawaii. Haven't been there myself since 1986.