Bring on the bling! Muahahahahaa...

sunny_nites said:
Early test prototype (and my constant pocket light for some time now) of the Micro ATL G5 in aluminum with the Moly Resin semi gloss black coating.
Click to expand...

How much does it weigh, and what are the brightness levels and mode sequence? No PWM?

do you know the CRI rating of the warm XP-G2?

Fantastic photos, Copper has my attention!

And thumbs up on the tritium slots :twothumbs

Hi jon_slider - thanks for your interest in the G5 and G5 eX!

These lights do use a PWM but at a very high duty cycle rate so there is no noticeable refresh flicker . Also, they do not use an inductor so there is no transformer wine.

I will have to get back to you with the specs on the weight and CRI ratings.

These look really good! I'm definitely going to keep an eye on this project as it progresses.

Keep up the great work! :twothumbs

Edit: Would be in for a copper G5 eX with trit slots, neutral tint, if that matters at the moment.
Last edited: Nov 22, 2015

I'm in for a brass G5eX probably neutral tint
could we get a picture of the locator beacon?

could we get a picture of the locator beacon?
Click to expand...

You can kind of see it in the last set of pics I posted but I fill for sure get some better ones. It will work similarly to the way it has in all previous versions where it will shine through the primary optic.

Ah yes I should have studied the pictures more closely :twothumbs

Interested as well. Good call on using the optic!
G

I'm in for a G5ex aluminum with moly resin and trit slots. Want something I can wear around my neck and not turn my skin green. Also is the battery only good for 25 charges? Is it easily replaceable?
T

greatabpe said:
I'm in for a G5ex aluminum with moly resin and trit slots. Want something I can wear around my neck and not turn my skin green. Also is the battery only good for 25 charges? Is it easily replaceable?
Click to expand...

Yeah, I was thinking the same about the battery but figured I misread it.

Sorry for the confusion on the battery. The 25x indicates the max discharge current the battery can supply and the max current it can be recharged at. The battery powering the G5 and G5 eX is a 250mah lithium polymer with a charge/discharge rating of 25 times its nominal current, ie it could be charged and discharged at up to 6.2 amps. That's in theory anyway, in reality the safety circuit on the battery would cut the juice off at around 2 amps.

The G5 and G5 eX's 250mah lithium polymer battery could typically be recharged around 500 times and is similar to what is inside modern cell phones and tablets.

In practice, I'm finding that I charge my G5 prototype maybe every couple of weeks. For the sake of simplicity, lets say you would charge your G5 or G5 eX every week; that would give your battery an approximate life span of 9 years (500 charge life cycle/52 weeks per year) .

The battery can also be replaced. It's not plug and play but is easier to swap out than in many other modern devices like an iPod for example.

The little battery that could; It's not much to look at but this is the power supply for the G5 and G5 eX (and the G2 Updated Limited Edition, and the HP version) 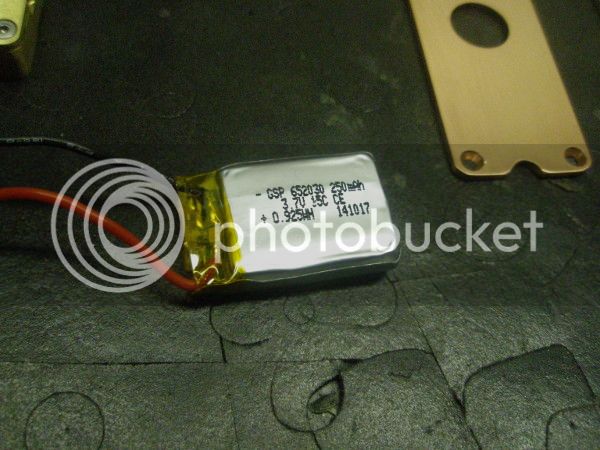 I'm in for at least one copper and one brass, 4000K, probably the G5eX with trit slots.
T

Yes interested in the ex version in the resin configuration.
S

sunny_nites said:
More of a struggle to get some beam shots posted than I had originally thought.

What I have today is really not an apples to apples comparison as the TI3 is running a Cree XP-G2 in neutral/warm while the Micro ATL G5 is running a Cree XP-E2 in nuetral/cool. I had been working on pics with a Cree XP-G2, neutral/warm in a G5 but managed to knock the dome off the only heat sink mounted XP-G2 I had at the moment. That XP-G2 will still work well for heat testing but not so much for beam quality.

So keep in mind that the pics I'm posting today are only to compare the beam patterns, not the max brightness or color temps.

On the left is the Ti3 and on the right is the G5. (Sorry for the confusion, originally I had the patterns reversed. Correct now with the TI3 on the left and the G5 on the right)

Actually a lot going on in the above pic. Notice the beam pattern on the G5 is not quite as round as the Ti3? The Carlco optic at 10mm produces a beam somewhere in between a reflector and an aspheric lens. Not as much spill as a reflector but not as tightly focused as an aspheric, really somewhere in the middle. Note the hotspot of the beam is a bit brighter on the G5 but the Ti3 spill illuminates more of the surrounding area, like the brown wood paneling on the right.

The ultra low setting (different manufactures call it different things, like firefly, moonlight, etc) on each is pretty comparable. You can see that the G5 shows more of a square beam, like you might see on an aspheric. Note, the G5 eX will have a somewhat brighter ultra low mode.

Close up of the G5 beam showing the squared pattern. 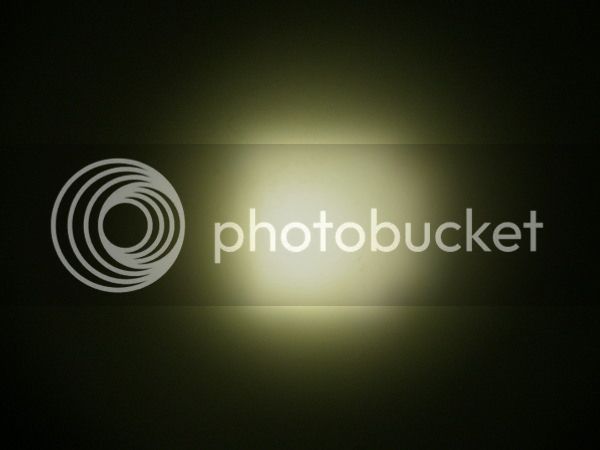 Nothing to do with beam patterns really but I got ahold of some champfer bits and have been figuring out how to use them. 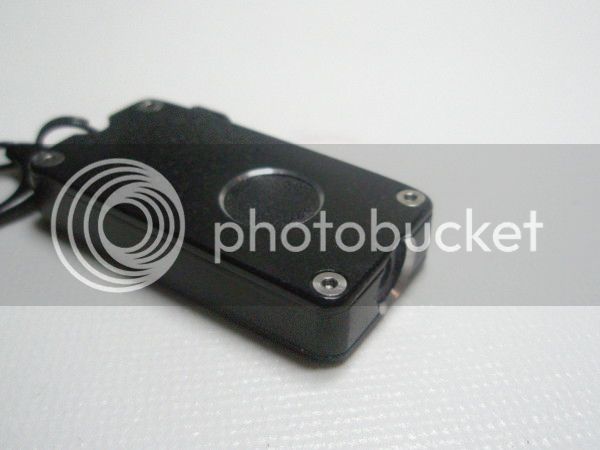 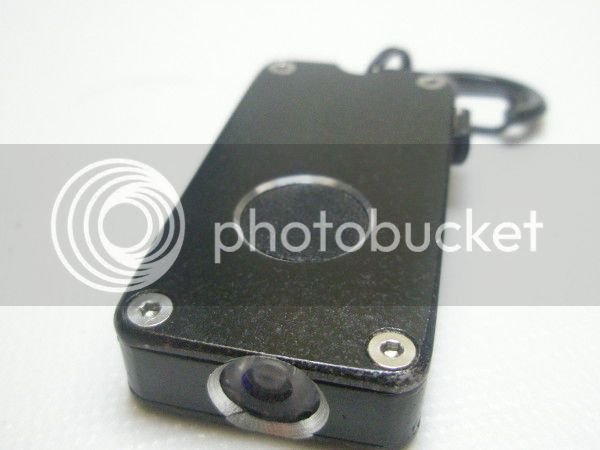 I believe the scuffed up corner is more from my, still needing lots of practice, spraying technique rather than a statement on the Moly Resisns durability. 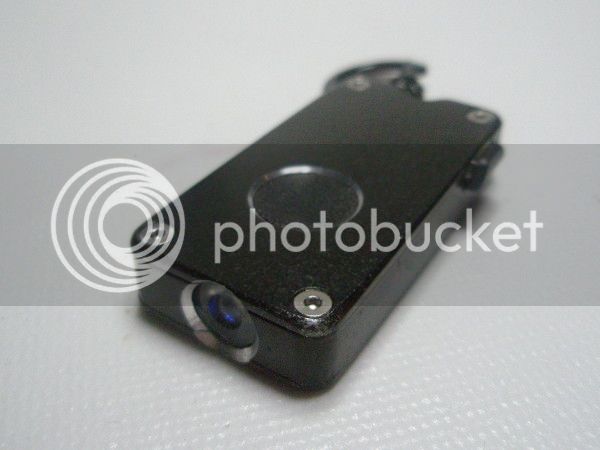 I planned on sand blasting the case and reapplying the Moly Resin but actually really like the contrast and am just going to keep it as is. 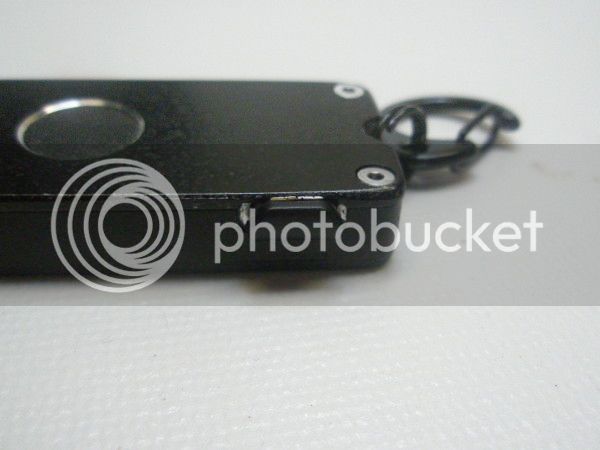 The G5 and G5 eX will come with these silicone USB port covers that you can use or not use, which ever you prefer. They will be more recessed in the production versions.

Hi there, I am new to the forum but am interested in this light for sure, in copper! What is the best way to find it once it is in production?
Thanks
SMAJ

Thanks for your interest in the Micro ATL G5 series!

Once the light is in production, look for the sales thread under:
http://www.candlepowerforums.com/vb/forumdisplay.php?92-CPF-Custom-Flashlight-Builders-and-Modders

This looks like an incredible keychain light! I'd love to buy one with a high CRI Nichia 219 LED. Would this be a potential option?
Last edited: Nov 30, 2015

I've had a couple of inquires about the Nichia 219 and am going to look into the possibility.

It depends on a couple of things; primarily, will it work with the 10mm Carlco optic and the depth of the LED mounted on it's heat pad assembly. A third issue would be finding a reliable source for them.

If anyone knows of a supplier for the Nichia 219, preferably in the US and willing to ship in small quantities, please let me know.

sunny_nites said:
I've had a couple of inquires about the Nichia 219 and am going to look into the possibility.

It depends on a couple of things; primarily, will it work with the 10mm Carlco optic and the depth of the LED mounted on it's heat pad assembly. A third issue would be finding a reliable source for them.

If anyone knows of a supplier for the Nichia 219, preferably in the US and willing to ship in small quantities, please let me know.

The Nichia 219 works very similar to the xp-g in regards to reflectors and optics. The package size is very close, if not identical in dimensions (McGizmo interchanges these leds with the same reflector). Craig from Illumination supply sells the 219 led's very affordably in single quantities. http://www.illumn.com/leds-drivers-optics-mcpcbs/nichia-leds.html?___store=default I've purchased from him numerous of times, and is top notch to deal with.

I really hope we can see this light with a 219. It will be a great high CRI option for many of us :thumbsup:

Awesome, thanks for the info and link!

sunny_nites said:
Awesome, thanks for the info and link!
Click to expand...

Connecting a driver and P60 Shell

Learning about modding and customs