I'm looking for a way to use my Surefire 12P bored with M61 or Turbo Quark for mountain biking at night.

One way I was thinking of mounting the light in the handle bar or mounting to a helmet although the 12P might be too big for that.

We have a sub-forum for questions and discussions about Bicycle lights, so I'll move your thread there.

there are also threads that discuss this exact question
H

funkymonkey1111 said:
there are also threads that discuss this exact question
Click to expand...

Also, for what it is worth... a 12P is going to be on the large side for bar mounting, and certainly too heavy/large for helmet mounting.

I've ridden road and trails at night a bunch with a couple different 2AA lights strapped to my helmet. The weight of these tends to be great (Fenix L2D is nice and light, Eagletac P100A2 isn't too heavy either), though I wouldn't want a light that is much longer. I've also used the Fenix mounted on the handlebars as a second light to supplement a helmet light. I used a light mount from shiningbeam.com and wrapped a piece of inner tube around the light to make it fit tightly in the mount. This worked well even when bouncing my way down a trail. Personally I would limit myself to using 2AA or 18650 lights either on the bars or on my helmet (smaller lights are fine too, as long as they meet your output and runtime standards), anything bigger and I suspect I would not be comfortable with them.
Last edited: May 20, 2010

Use two-fish blocks. 4seven's sells a few versions in a 3pk.
If you must use a longer/heavy light, consider mounting it parallel along the top-tube. A twofish block near the light's head and another near the tail can hold a large light secure.-- frame mounting never helps in turns so this light could carry you through straights but you'll need to activate a helmet mounted light for when you're pearing around twists and turns.

Quark turbo is wrong beam pattern. For cycling a de-focused aspheric, or an optic is a better choice. A bright hot-spot doesn't help with the stuff that isn't in the hotspot. The dealextreme 'x2000 flood-zoom' is a great example of a cheap light that outperforms $$$ lights with the artifact free beam highlighting all terrain features.

For reflectors a ledil Boom is the best I've found (no artifacts, diffuse illumination).

Now for example, if you were going to buy a Moddoo triple xre and use that, low for easy sections and mid or high mode for the tough parts, I'd say you were making an excellent choice. I've put my triple on my partner's bike for a lakeside trail ride last night and she loved it.
Last edited: May 23, 2010
Y

i'm with hack_on_wheels: 2*AA, 1*18650 ist very nice on the bars, 12P might already be too long.
Problem is the weight that has to be supported from the holder.
(which - I have typed quite several times - must be able to adjust the light to the sides!
Just in case the bar is not completely in line with the direction the beam goes with a non-movable holder like a 2fish.
((thats so bad, because the 2fish could easily hold the 12P))


when You dont find a bar holder, build one: 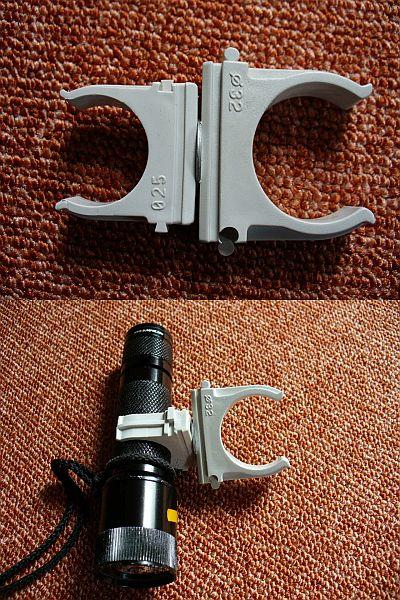 use with additional rubber band

As to what focusing device "has to be used": totally personal preference, nothing that is "right" or "wrong".
I have yet seldomly seen any reflector light that does not work for MTBiking and I absolutely hate any light with optics, especially the focusing-zoom non spill light beam.
(But I also recommend that light, because it is cheap, small and rugged. So far 5 ppl in my bike group got it and all are blown away. Total system cost of about 40,--)
Last edited: May 24, 2010
C

How can you hate "any" light with optics?
http://i199.photobucket.com/albums/aa46/amticoman/7 UP XPG/Picture151.jpg
:thinking:
Y

Unfortunately a single shot is not worth anything, because its the comparison that counts.
Also it is not known (?) what this light in the link is built for. If it is for wide area illumination up to 15 meters, then its quite good
But I am certain a comparable P7 / MC-E light w. reflector gives the same spill + a real beam, useable for biking in the dark.
That looks like the quad-Hope with diffusor, or something.

Better take 2 identical lights, turn them on, set cam to "auto" so it sets eveything depending on the brighter light --> almost the same impression as in reality.
Then You will know.


Even when the beam is about the same (possible with a good optic), the spill is nearly a joke.

example:
- pls ignore the tints, just look at the beams which are totally the same
- these are Lux III,
- L2D left (and this even is not a very good reflector)
- NX05 optic right
- about the same brightness,
- about the same beam degree
... only in that 1 to 2 meter-from-wall-distance the fading beam of the optic seems better (but is not)

when You are not into led for some time, You might not have learned-by-doing.
That time, about 2005-06 (or so ), the reflector won over optics among the modders.

If there weren't ppl who like their illumination that way, no such lights were built.
Sheer number is considerably less. (is that already "survival of the fittest?")
C

I like the new Regina reflector with the XP-G setup. I can't wait to build a double/triple. I think the thing behind the optics is that you can build a "useable" light in a smaller package. I mean yeah...a double XP-G with reflectors may have the same appearance as a triple XP-G with optics, but there's no way you can fit it in the same size housing b/c the footpring of triple Carclo is 20mm and the footprint of a double Ledil refl. is 38mm.


I remember that silly MagicShine thread where the guy tried 15 and 25 deg optics instead of the stock reflector...it was obviously worse. But you take a light like the 7up with 7xp series emitters...you'd be hard pressed to come up with a comparable light with equal throw, equal spill...and fit in such a small housing. (but of course...this is also IMO):twothumbs


I agree with you that refl. will harness the light better...but I don't hate all lights with optics.

for bar mount Ive been using a lockblock with shoegoo added to
the strap that hold the bar. it holds my C2 on 10ft drops etc no
problem.