The bins 4C0 or 4D0 are about 4300deg K color temperature and straddles the Planckian/blackbody locus. 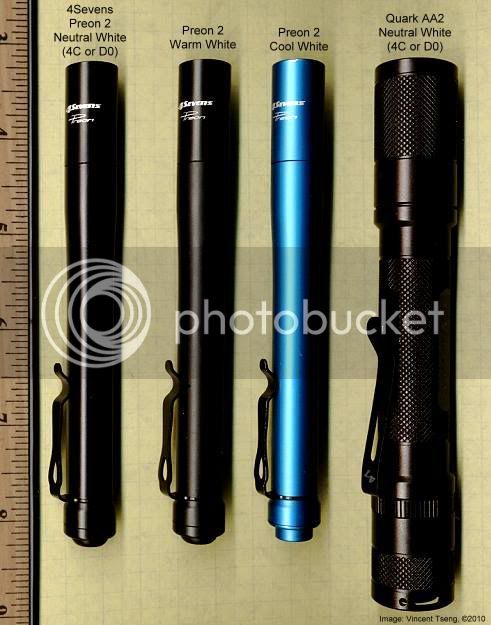 I have scaled this photo to display life-size on my PC monitor at 96dpi - hopefully it will do so on other PC monitors (Macs are supposed to be 72dpi, so probably show at 133% life-size)
there is a ruler in inches in the pic, so one can actually measure the lights.

It's been mentioned that these new Neutral white Preon 2s seem to be glossier than the previous Preon 2s like the recent Warm White version - one can just about see this in the photo. 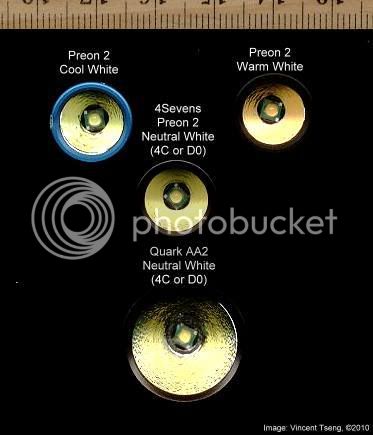 The Warm White is pretty easy to identify - there is less difference between the Cool White and the Neutral Whites but still just noticeable. 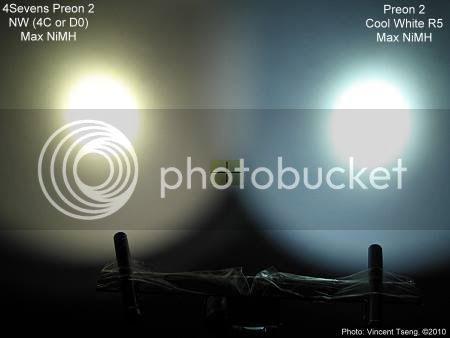 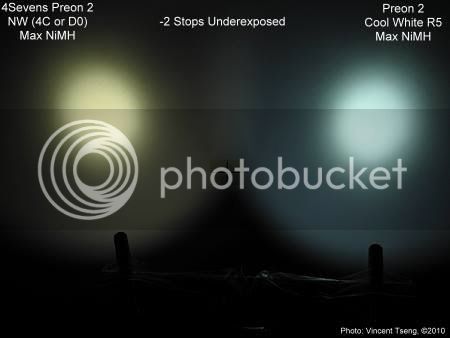 WoW! the Cool White seems very blue in this comparison....... again a slight hint of green in the Neutral White - so perhaps again I have a 4C0? 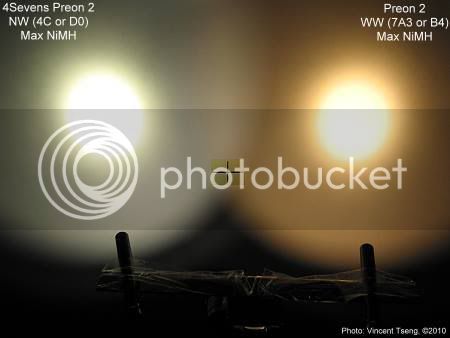 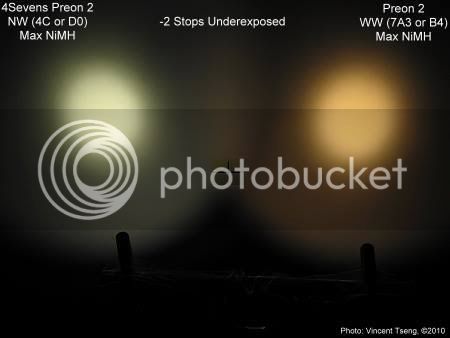 this comparison seems to emphasize the slight green tint in the NW. 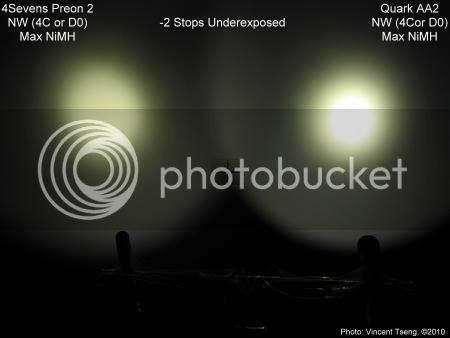 the Quark AA2 is brighter both show a slight hint of green -
the Quark AA2 shows a little "cooler" than the Preon 2 - perhaps the drive current is higher in the Quark AA2?

Like the 4Sevens Neutral White (XP-G R4 - 4C0 or 4D0) Q-Mini AA I liked the tint of these new Neutral White - other than the slight hint of green which really does not show in most real usage (other than perhaps shining on the back of my hand or on corrugated cardboard) - these seem to be more "neutral" than the previous NW XP-E Q3 5A3 (I'll do a comparison with a Quark AA2 NW XP-E Q3 5A3 in a follow up post later).

I like this enough that I probably would EDC the NW Preon 2 head on a clicky Preon 1 body using just a single AAA.

Thanks for the pics. I've been nothing but happy with my NWP2. How do you think it compares directly to the WW for general use?

I've been thinking about getting a WW and running it as a back-up in the 1xAAA form for keychain carry.
U

spoonrobot said:
Thanks for the pics. I've been nothing but happy with my NWP2. How do you think it compares directly to the WW for general use?
I've been thinking about getting a WW and running it as a back-up in the 1xAAA form for keychain carry.
Click to expand...

Most opinions here are that incandescent lighting is better than cool white LED for outdoors usage. That kind of makes sense from the Kruithof curve as our eyes/brain tend to favor more yellow/amber tints at lower light levels - but I think it is also that a more yellow/amber tint actually enhances our vision.

What's incandescent got to do with your question?

4Sevens Quark AA-Warm Comparison Review
(but with all the LED advantages of longer runtimes and lifetime, plus multi levels etc.)