Hi guys,
As some of you know there has been work by RUSH on a design for a converter that fits in the light engines I use for the "E-series lights" I offer, namely, the Mule, SunDrop, Haiku and Makai. It's time to add this converter to the confusion/ options available. It can be considered an alternative to the 3S converter which has been the mainstay and default converter now for a number of years. The 3S will remain the default and continues to be available. For sake of identification, I will refer to this new converter as the HIVE converter. So this becomes the fourth converter used in these light engines. It joins the AA, 3S and 6V converters. In short hand, I will refer to it as the HV.

So what is the deal with this HIVE converter? Well it is very similar in design performance and versatility to the RUSH converter used in the Aqua and Terra Lights. It is designed primarily to be coupled with a RCR123 battery but it can also be driven by a CR123 or even 2xAA. Minimum input voltage is 1.8V. The Converter is set with a default of four output levels; 12, 114, 391, 1000 mA. Like the other converters, level shifting is accomplished with a short off cycle. I built light engines with the HIVE and the three LED's I will be using with it, XP-G2, 119V and XM-L2. I put these light engines in a Mule head and took relative measurements of lumens in my integrating sphere.


In comparison to the 3S converter, the real noticeable difference with the HIVE is the new first level of Low Low and the higher outputs of the other three levels.

Like the other HIVE converter from RUSH that I use in the Aqua/Terra lights, this HIVE converter can be programmed for different outputs and number of outputs. I don't want to get involved in the discussions or become proficient at programming or offer alternative programming with the lights. I leave this entirely up to the end user and to add a barrier to my involvement as I did with the other converter, I asked RUSH to design in a bridge that needs to be jumpered to get into program mode. In the photo below, you can see the two gold rectangles at "6 o'clock" that require a solder bridge to allow programming: 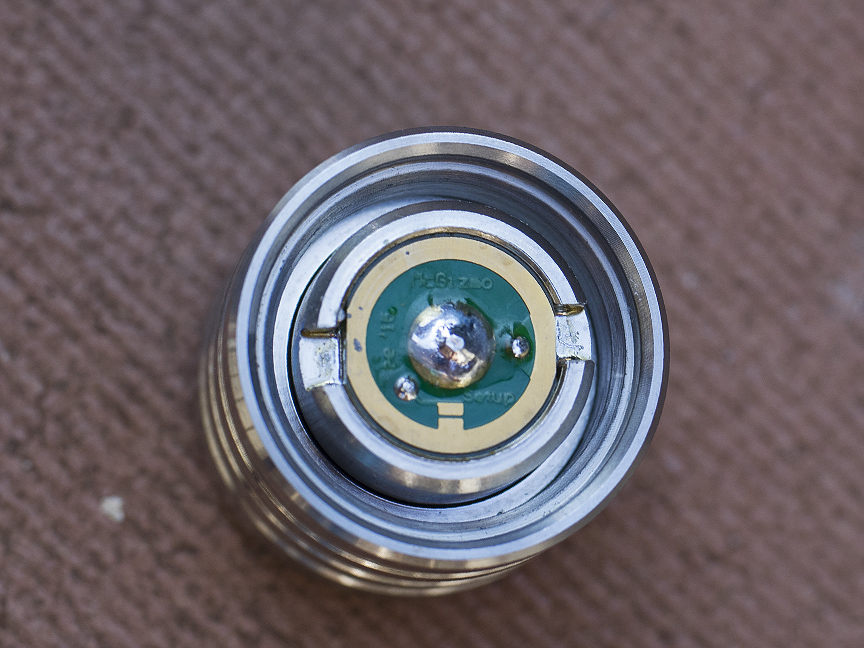 This HIVE converter option is now available in my light offerings and it has a $10 additional cost over the equivalent light using a 3S converter. I will do my best in the coming days to clean up some other threads and information to not only add this new converter to the options but hopefully clear up some of the confusion as well.

This converter has been in the works and under some trials now for a fair amount of time. I think it definitely has something of value to offer some of you depending on your requirements.

I leave it to RUSH to explain the similarities and differences between this converter and the one used in the Aqua/Terra lights that some of you are now versed with.

Don has given a good overview of what the new Hive driver (HiveLD-S 1.8V in my own naming) for the E-Series lights is capable of. Some of this has already been discussed in the thread for the HiveLD-P driver used in the Aqua lights, however it makes some sense to have a separate thread for the new driver to avoid confusion regarding some differences in their specs.


Among the noteworthy differences is the increased input voltage range that starts at 1.8V for this driver. This allows the use of primary lithium batteries as well as a 2x AA setup. Because of the high input currents the lower input voltage brings with it, the current to the LED will not stay at the full default 1000 mA below 3.0 V input voltage. The decrease is not very significant however and might not even be noticeable without 1:1 comparison.
There have also been a few changes to the output current range, it will start from about a few mA and go up to 1000 mA in the default configuration.


I have updated the documentation for the new driver and there is separate manuals for each driver hardware. The website address is the same as before but please be sure that you download the correct manual.


Please use this thread for all questions and discussion, especially regarding the setup mode of the driver.
Last edited: Oct 13, 2015
E

The default output on the highest level (level 21) is 1000 mA. The driver is configured to a certain maximum drive current and that is the current on level 21.
You could change the output current to 1200 mA through the setup mode of the driver. You will find all information on how to do so on the website in my post above.
If you use the driver with a 18650 cell then 1200 mA certainly is possible.

While using 18650 tube and close the jumper by solder, I manage to change setting 4(voltage foldback) to 1 faster blink(Li-ion minimal).. Am i assuming correctly, to get the 1200ma, it must be followed by go to setting 16, make it 12 short blink? And go to setting 6 and save?

Since you want to use a 18650 Li-Ion, setting the voltage foldback to Li-Ion minimal (or optimal) was the right choice, that way you take advantage of the battery voltage supervision to be notified when the cell is getting empty.
You are right about changing setting 16 to a value of 12 for 1200 mA. The blinks for the value are however not 12 short ones, but a quick double blink for a value of 10, followed by two blinks for the single digit number 2.
You actually don't have to save the maximum voltage setting in any of the presets as the calibrated maximum voltage applies to all presets and is automatically saved globally when you change it.

didi , do you already have this new driver? I ordered mine an hour after Mr. McG released it on Friday and will be receiving it this Friday. Not to side track the topic.

thanks sir martin, now it's set to 1200 ma ^^
yup, took quite some time to learn it first, to enter the setting (long-short-long toggle),once you remember the timing, it's so much fun to program.... 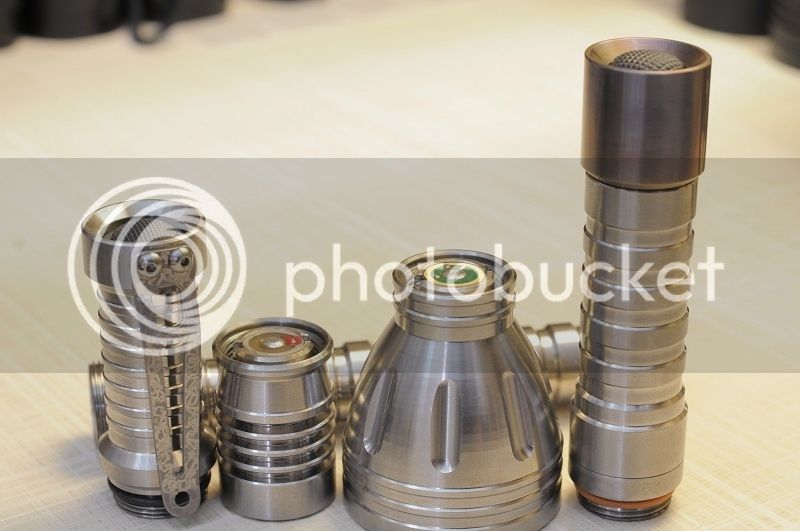 is there anything i should worry, because the height of the positive connection on the driver is almost the same height with the jumper-solder i made??

Great that you managed to program your driver the way you wanted! I'm glad that you actually found programming fun after the learning curve

Nice collection you got there. Is that a McGizmo tube on the right that accepts 18650 cells?
I don't think that you have to worry about the solder bump on the jumper, it is probably far enough off center that the top of the cell can never reach it. If you hold up the cell against the driver you should be able to tell if you are on the safe side.

I was hoping to get some answers regarding the voltage fold back for different cell types. I'd like to know what the difference (specs would be nice) between lithium ion 16340, lithium CR123 and lithium (2x)AA settings are.

Loving the HIVE converter so far. It doesn't require the super uber quick clicks the 3S does to change modes. The LL mode is the the lowest I've ever had in a light and is pretty cool. I guess I'm starting to understand why some people insist on a moonlight mode. We'll see how often I actually use it.

Good call on the voltage thresholds for the output reduction for different cell types. The reduction steps span a certain voltage range, for all but the 2x NiMH/alkaline that range is 0.5 V.
I've added this information to the manual.


rush said:
Good call on the voltage thresholds for the output reduction for different cell types. The reduction steps span a certain voltage range, for all but the 2x NiMH/alkaline that range is 0.5 V.
I've added this information to the manual.

Thanks for adding that information, very helpful.

I've had a little time to play with my new Haiku head with Hive 119V which arrived today.
First thing I did was centre the LED which was a bit out, no big deal but I'm picky ha ha.
Second thing I did was to put a tiny blob of solder on to the set up tab. I probably wouldn't have bothered so soon but the visible PWM on the LL mode bothered me. The menu/customisation is a bit weird but not impossible to navigate.
By changing the LL from the default level of 3 (12mA) to level 4 (18mA) I was able to get rid of the visible PWM. The levels 1 to 21 change depending on the max mA setting for level 21 so the above level to mA settings apply to a level 21 (max) of 1A.
I don't imagine I'll raise the max setting above 1A (to 1.2A) as I like to use primary batteries and 16340, it also gets quite warm at 1A anyway. I may even lower the max to 800 or even 600mA but I'm happy with the 1A max for now, I might even tweak my other levels a touch but over all the 4 modes with the current spacing seems ok (18, 114, 391, 1000mA).
I think this new LE would be quite a powerful little unit with an XPG2 but whenever I get an LE from Don I can't ever bring myself to get anything other than the 119V.
Haven't tested it against the standard 3S 119V in the Haiku head but I will eventually, I did however compare two Haiku heads side by side being the new Hive 119V vs my home made XPG2 S3 3A with a GDuP (10, 180, 700mA) and the XPG2 convincingly beat the Hive 119V on both medium and high (391 vs 180mA and 1000 vs 700mA). I know it's kind of an apples and oranges thing but interesting nonetheless.
That's all I have to report for now.
Great work as usual Don, thanks mate and to Rush also.
Last edited: Oct 19, 2015
You must log in or register to reply here.
Share:
Facebook Twitter Reddit Pinterest Tumblr WhatsApp Email Share Link