Next small wave of Ti offerings...**SOLD**

I decided not to polish my S27-PD! It looks great in the RAW.

What a great light! The beam characteristics is exactly what I hoped for in a 27L reflector! Beautiful tint and BRIGHT!. Boy....this and the Mizer-PD pretty much covers 95% of my lighting needs. I've been waiting for this light for a long time (ever since the original Ti-27L PD was introduced last year) and now I finally have it! Thanks, Don!!

So you got it too congrats! I got mine as well today and I love it just as much. I've settled on the XR19-PD and S27-C (body switch) and they are the best pair of lights I've ever used/owned. Thanks Don!
C

Received my Ti S27-PD and XR19-PD. As stated above, I like them both so much that I'm unable to pick one for EDC and feel I must have them both with me at all times! 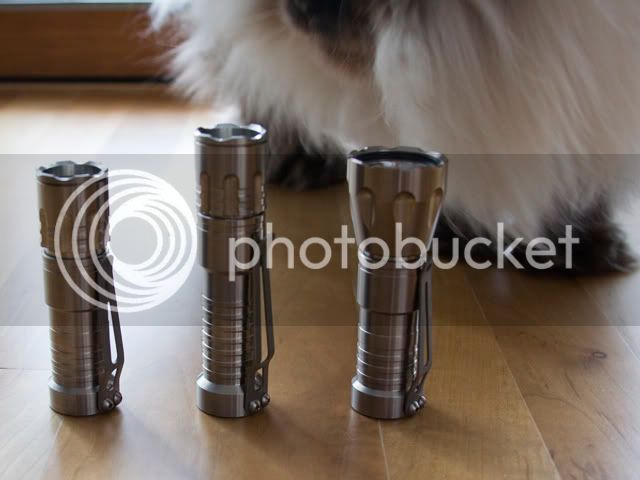 Please excuse lack of photography skills and Rix who insisted on being in the picture.

WOW... that S27-Ti PD just looks amazing. It's at the top of my lust list (at least when it comes to flashlights), and I'm just hoping that I'm online when Don puts the next batch up for sale. Given the time difference with Hawaii, though, that can be tough for us East coast guys.
R

My XR19-PD arrived yesterday. What a light, I love the PD.

I did ask Don for the Mizer, but I can't see any drop in brightness compared to my XR19-C, not that it matters. I'm going to be using this light a lot.

The finish on the Ti is perfect.

I would say that you have your bases covered with those babies.
Three finest lights in the world.
C

Stop that! Now you made me get drool all over my nice clean shirt.
Nice pics!
T

It's gotta be the camera, I just got mine and it doesn't look as good! I need to buff it or something...


I figured that these pics will ease the pain for those who missed out on some of the runs.....:thinking:

Thanks WP... now I am depressed LOL

Beautiful light and beautiful pics... I've gotta start stalking Don to make sure I get one.

I can help start you off with that. I had written this down a while ago for another forum. It isn't exactly for product photography but non the less it's a good start in flash photography.

So I'm going to have to start at the beginning here. I'm going to try to say this as simple as I can. This will apply to a manually controlled flash.

First comes your aperture. Your aperture as well as regulating your depth of field also regulates the power output of the flash. This means that as light comes out of the flash it travel over the distance of the scene. At different distances on that plane the flash will represent a different aperture. So by this simple understanding you can by example get an f11 at 6-ft from the flash. It will then fall off intermittently over distance. Say 10-ft will be f8 then 12-ft will be f5.6.. As the flash travels it will spread out over distance and the light output will decrease and be less intense. So now that you have picked which aperture you would like to use you next have to set the flash for the power output that will give you the amount of light that you need to get say f8 at 10 feet. Next you will need a shutter speed.

A shutters purpose, when used with a flash is also used to regulate light output in distances. The slower the shutter the longer it has for that flash, as well as ambient light, to travel the distance to the background objects bounce off and travel back to the camera. The longer it is open the more time it has to burn in the background. So lets go back. You are getting an f8 on your subject from 10 ft away and your background 30 ft away and is only giving you a 2.8. Now you need to take a reflective metering of your background. With the meter set on aperture priority mode, set the aperture to f8 so that it can give you the ambient expose of the background. the meter may say something like 3/4 sec at f8. Now that flash is going to go off and give you your f8 at 10-ft and the shutter will stay open long enough to burn in that background. With this all said this is the basic rundown on what your camera is doing for you when you are set on ettl and the camera is doing all the work. With the camera on manual and the flash on ettl the camera is trying to decipher which power output is going to be needed to expose the scenario properly. A good example is sometimes you will take a picture and you will have a person completely over exposed in the foreground and the background will be exposed properly. This is because the camera is metering the background and cranking out enough power to expose your background at your aperture setting. So if your on f5.6 it is going to try to make your background 5.6. This means that the person in the foreground is essentially f16 and will be 3 stops over exposed. A quick technique to get a correct expose on a subject when shooting in a low light situation is to set the cameras metering system to a spot metering or center weighted metering. Then push the pre flash exposure lock with the subject you want exposed properly positioned through your lens in the designated focusing point. That way the camera will put out the power needed to light the subject of concern and not dump the flash in order to try to expose the entire scene. Then you drag the shutter a little to bring in that background.
One other thing though. Now your flash is going to freeze the subject in place but if you have that camera set to a shutter setting too low your picture is going to be effected by motion blur. So if you don't have a tripod you are going to have to set your aperture to a setting that is going to allow you to hold that camera steady enough to get that background in with out making a mess of it. If you are going hand held, the lower the aperture, the easier it is going to be to get that background light in. You must also not forget that the rule of depth of field still applies to your aperture.

By the way ETTL means Exposer Through The Lens.

If I messed any of this up someone correct me.

I'm sorry if this is to over the top for this thread
To make up for it though I have a whole lot of pics to follow tomarrow. Just recieved my xr27-c today and it is

photorob ... thanx
Not that I got it all, but thanx for trying

Although something like this would be better place in a seperate thread in the Café ... we all need that kind of knowledge.

my TI XRE-PD sorry the photo is poor